Reilly Fitzgerald | Out of the Rabbit Hole 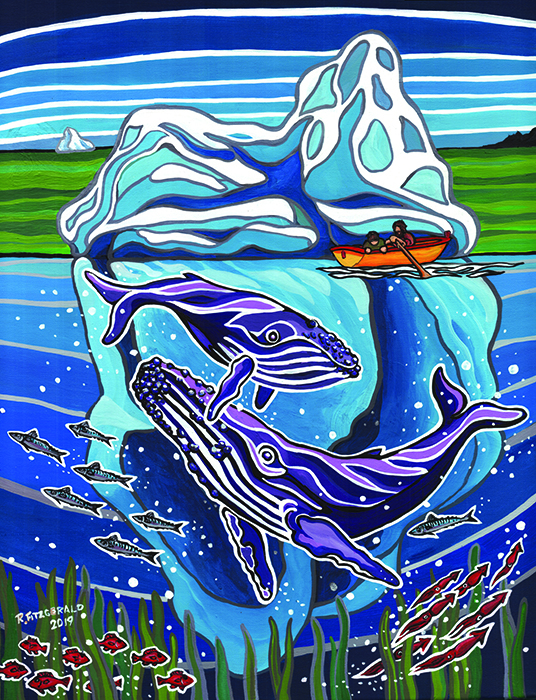 His early artistic endeavours were with watercolour and oil paints and were strongly based in what would be called a realistic style, artist Reilly Fitzgerald of Clarenville began.

“In the late 1990s and early 2000s I did a series of paintings in a collection I called ‘Ghosts from the Past’, which involved painting realistic people from older  photographs in grey tones and adding a more colourful and often more expressionistic background,” he said. 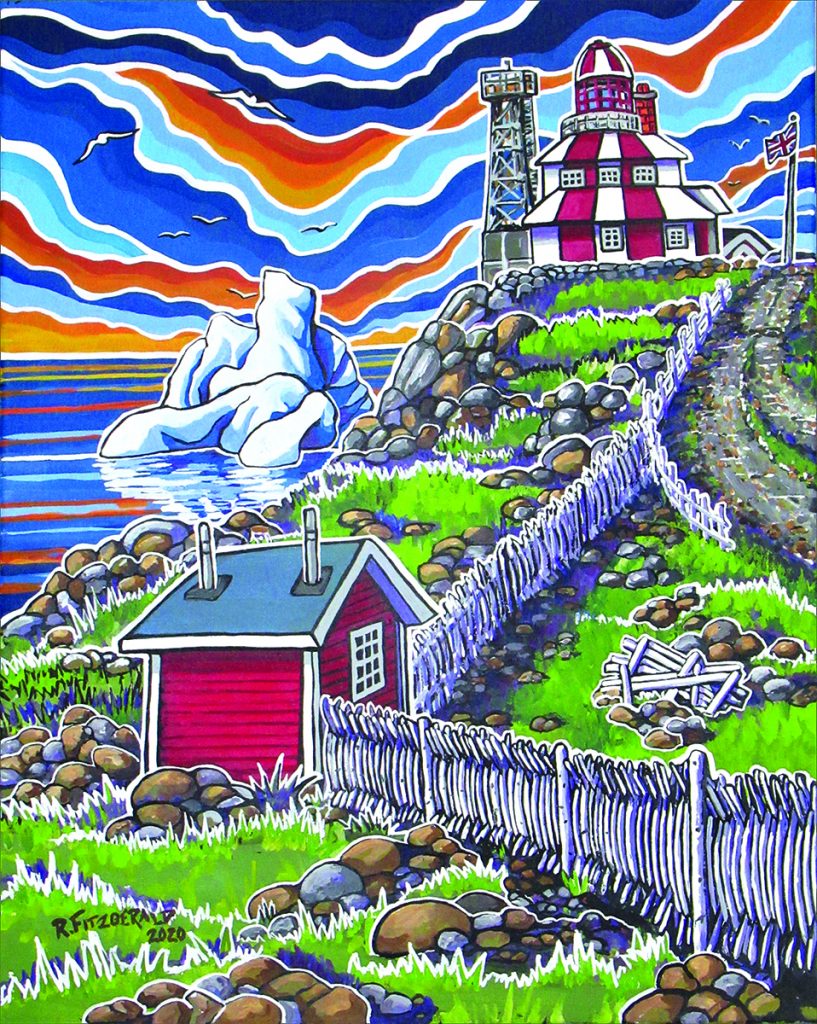 In 2011, following the return of his chronic back pain and arthritis, he left his full-time teaching position and immersed himself into painting.

“I painted a prolific amount of realistic pieces in watercolour, including many portraits such as children and hockey portraits. Most of these were requested gifts for family and commissioned pieces. Then, in 2012, I discovered acrylics and a change in style and attitude followed,” he shared.

The changes happened about the same time he began to experiment with a more colourful and expressionistic style.

“I also stopped taking commissions as I felt they put added pressure and time constraints to my work. I found painting for myself to be very therapeutic and one of the only things that distracted me from the constant pain I endured. This change in focus can be clearly seen in my work at this time.”

He has continued to develop his own style, strongly influenced by Canadian artists Ted Harrison and Lawren Harris, as well as NL artist David Blackwood. “I continue to incorporate bold colours and outlines in black and more often white lines, and generally paint the scenery, people, history, wildlife, and culture of my home in Clarenville, and then more generally in all of Newfoundland and Labrador,” he said. 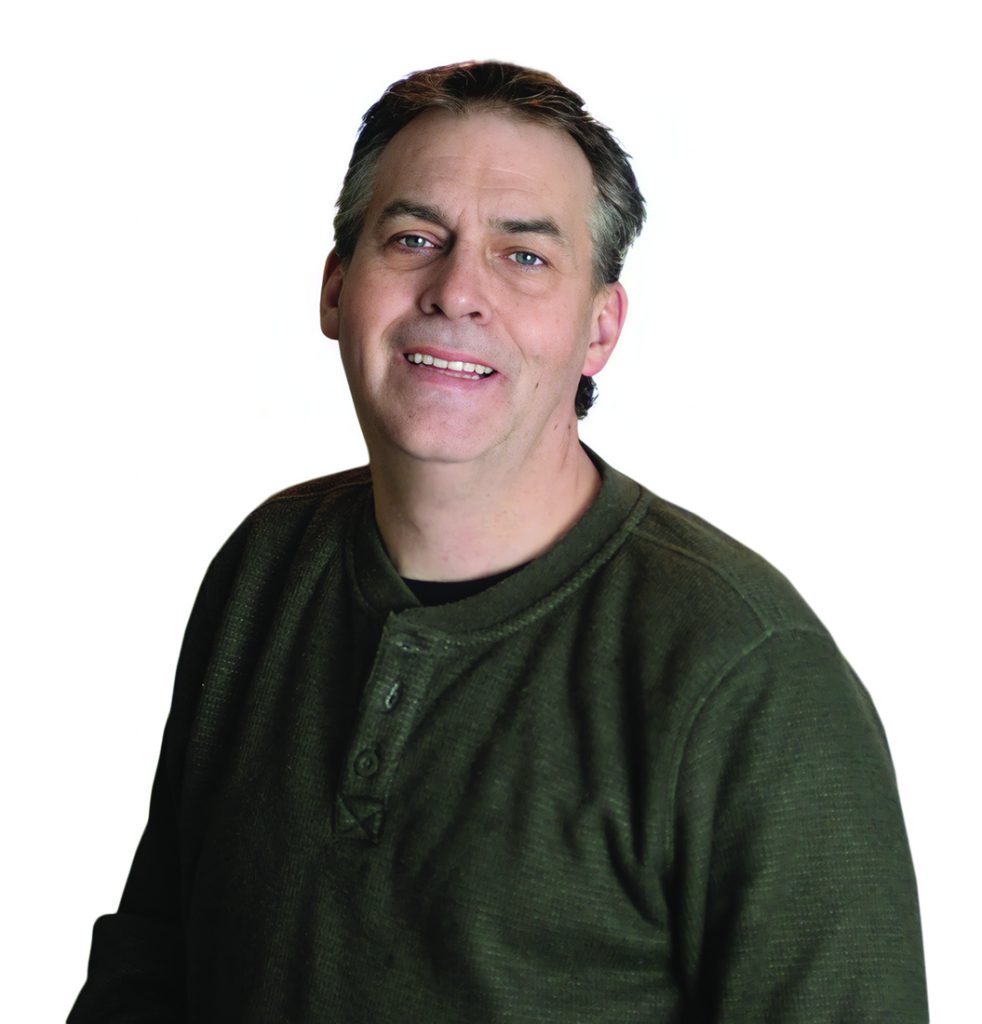 His work, which is available through Facebook or through his daughter at Eagle Photo Studio, are compelling and quite stunning. It’s been a difficult journey, he shared openly. “I say my success is more along the lines of not falling into all the rabbit holes,” he laughed.

Born with physical challenges, he’s had to adjust to a life of pain and discomfort from a very young age, he shared.

“I can have very limited movement and it’s gotten worse. I spent a nice bit of my early years in the Janeway. Finally, in grade five, the teachers and the doctor realized my hand was impeding my ability to write and they sort of switched me over from being right-handed to left-handed. That must have switched my brain too because one side of the brain is more artistic than the other and suddenly I was the artist in the classroom.” 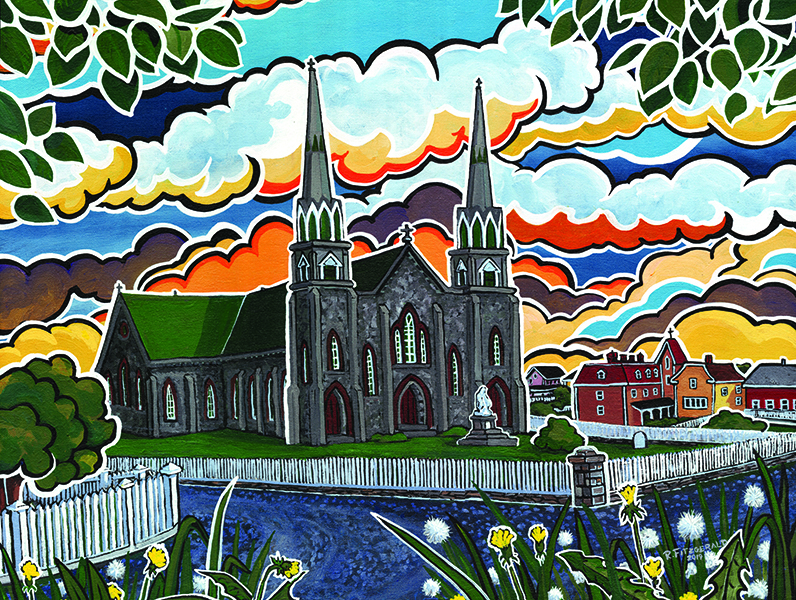 The community of Clarenville, where he settled to teach, has been good to him, he added, not just for inspiration but for friendships as well.

It’s hard when you have to leave your job due to pain – financially and emotionally – but money was raised and support was offered, he said, and for all of that, he’s grateful. Something else he’s grateful for? That he was able to continue to paint.

Painting has given him “a unique point of view of the beauty of Newfoundland and the joy that’s around.” What inspires him? “Newfoundland, the things around me, I think I’ve painted all my neighbour’s houses and the scenery around my house more than anything. But I love wildlife too.”
We ask how long it takes him to do a painting. He paused. “There’s no real answer to that. Some of the paintings take longer than others, and I usually have a few on the go at one time.”

Anything else he’d like to share? Another pause. “Just thank you for showing an interest. I’ve struggled, but my art is my joy and my peace and I hope it brings the same to others.”

2 thoughts on “Reilly Fitzgerald | Out of the Rabbit Hole”