A Down From Dublin Christmas 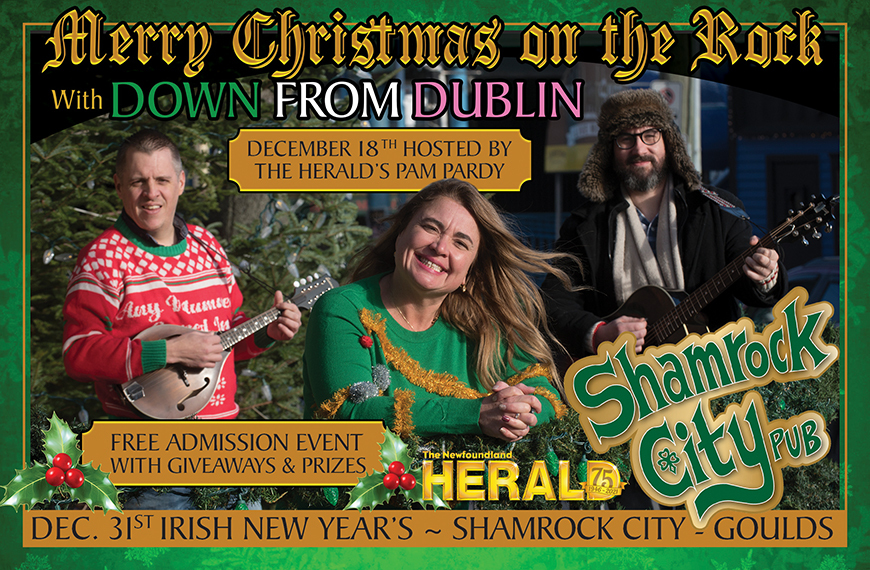 Sean Skiffington and  Matthew Dominic make up Down from Dublin and they are really getting into the Christmas spirit this year. With free-admission shows, like the one being hosted by The Hearld’s Pam Pardy at Shamrock City in Goulds on December 18th.

Dominic says this is an exciting time of the year and also one to count blessings. For one thing, the band has been kept busy and their music is being played on shows like the popular OZFM Jigs & Reels with Danielle Butt. “We’ve been blessed and we are working hard to make sure the blessings keep coming,” Dominic shared.

Dominic, who had a bad break (he literally felt and broke his leg) is getting around better now, and that’s another thing to be grateful for. Now? At Christmas, it’s time to give back. “The show on Dec. 18th with (Pardy) hosting is free admission,” he explained.

The duo are calling this their “Home Show off their Merry Christmas on the Rock tour, and they say they are really, really excited. “Thanks to Shamrock City and (Pardy) and The Newfoundland Herald, we’re doing one show on the tour for free, so it’s free admission to the show. We’ve got some party favors and some shirts and some beer tickets and stuff to give out too so it will be fun and hopefully kick off the days before Christmas in style,” Dominic added.

The b’ys have been to a few fun spots, from Clarenville to Grand Falls, and they’ve had many special guests perform with them, including the talented Jenna Cotter.

The fellas in Down From Dublin had Pardy join them onstage before, and while that outside concert – held on the beach at the Murray Premises – fell on the rainiest night of the summer, it was still loads of fun. “(Pardy) is an unofficial, official back up band mate now and we love her for that and for all her support. (Butt) too has been great to us, playing our songs. If bands like ours didn’t get played or written about then we wouldn’t have the reach we have. We work hard, but thanks to everyone who helps out.”

Down From Dublin’s newest Christmas song, Merry Christmas on the Rock, is going over “really well,” Skiffington says.

In honour of that, The Herald’s Managing Editor joined the band as they played a few tunes outside in the cold chill of almost winter and, dressed for the holidays in “Ugly” Christmas sweaters and winter gear, the merry trio hammed it up for the camera.

You’re having fun? we ask.

They certainly are, they say, but fun aside for a moment, as Dominic has a special request.

“Can I give a shout out to my bestie? My Nan is in hospital going through a tough time. She’s my biggest fan and I don’t know where’d I’d be without her love and support.”

Of course he can! Get better, Nan!