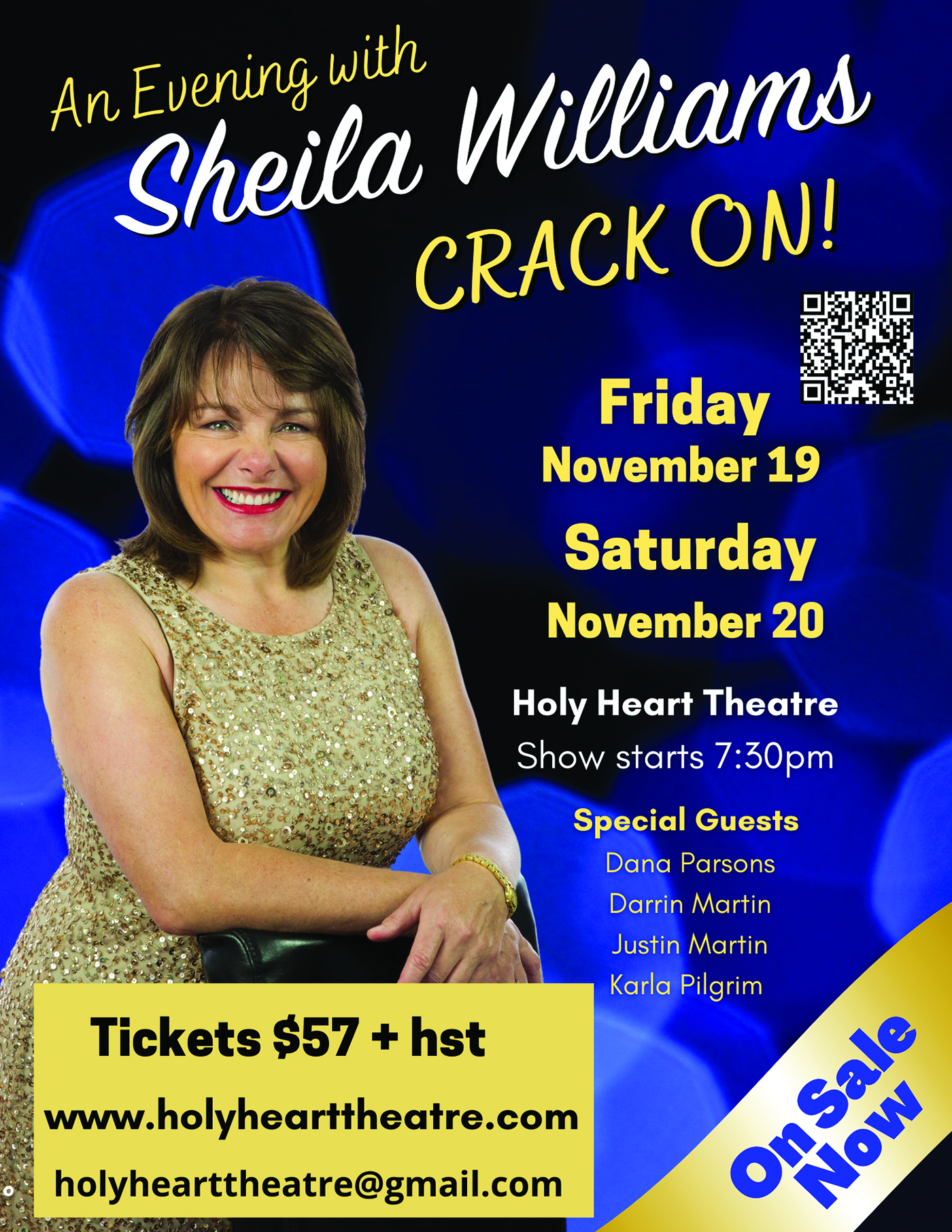 It’s the voice – and it doesn’t matter if she’s talking, laughing, or singing up a storm – that makes Sheila Williams so recognizable. Williams, no matter which of her many charming characters she decides to tackle, can always be picked out of a crowd  by that brilliant sparkle in her eyes as she does what she dearly loves to do most – entertain.

From online to on stage

“It’s such an exciting time of the year for me,” she began in a special Herald one-on-one. There’s a few shows in the works for Williams: Crack On at Holy Heart on Nov. 19th & 20th and A Christmas to Remember with Sheila Williams that will take the multi-talented entertainer around the province beginning Dec. 1st in Clarenville. “This time last year I was going online to entertain so to get back on stage makes me very excited.”

What can fans of Williams expect? “You can expect country, rock and pop and very special guests and of course impressions. It’s sort of whole shebang.”

While her show may feel familiar, rest assured, with almost two years to work on hitting the stage again, it’s a new onstage extravaganza.  “The outfits are so much fun. I change every chance I get. If someone else is doing a solo, that’s my changing time. I’ll come out as a different character, or I’ll come out in a new gown or new outfit. There’s some lovely surprises. All my characters will be there and it’ll be a fun time of comedy and music.”

We ask Williams, besides her fun wardrobe, what she was looking forward to the most. Knowing her, the answer didn’t surprise.

“I’m looking forward to the people. I’ve spent the last year and bit re-creating and reinventing myself, and it started with sitting down and saying, ‘that’s all we can do. We’ve got a pandemic.’ So then I did what I could to stay in touch with people, because that one-on-one is what you miss. I do Facebook Live each Thursday morning at 10:30 and I did some online shows, but I can’t wait to see people in an audience and to hear their responses. To get back in front of an audience will be a real treat.”

Williams says her sense of humour comes from this place and its people. “We’re just so unique, aren’t we?” she added with a knowing chuckle.  “Mom.  Her influence. That’s part of it. But you know, I look back over the years and I think, ‘yeah, my sense of humour definitely comes from growing up here and from my family and friends.’ If I’m out and I hear a funny line, I’ll write that down. I have lists of funny lines  that I can draw on and use,” she said.

We ask if she has a favourite all-time line or joke she likes to deliver. Williams paused. “I always really reap the benefit of being a woman. Menopause and that sort of thing. Weight gain and weight loss – all that stuff people can relate to. While I look like I’m off-the-cuff, I’m prepared.”

As she readies herself for the first set of shows, Crack On, she’s also planning ahead to her Christmas tour.  “It’s music and comedy. Things that make people feel good. Uplifts them. I really appreciate the opportunity to get in front of an audience again and to share my love of what I do with others. I want them to feel as good in the audience as I feel getting on that stage.”

Does Williams have anyone she admires, we ask? Anyone whose career she has tried to emulate?  “Absolutely. English comedian Victoria Wood, because she’s the best I’ve ever seen. She died in 2016 and I was thinking about writing a letter to her to tell her how much of an impact she had on me but she died before I did it. I thought ‘you should have written that letter.’ It’s a regret.”

Williams took that as a lesson, vowing to not make the same mistake again.

“I felt the same way about the Queen. So I thought, ‘No, I’m not having that regret again,’ so I wrote the Queen and said, ‘Hi, Your Majesty or Your Royal Highness. I just want to tell you that I have always loved you and loved what you’ve stood for and your dedication and your commitment.’”

Well, the Queen actually wrote back, Williams added with enthusiasm and wonder.  “It started,  ‘the Queen wishes for me to tell you…’ and it was this full letter. It was exciting, I got to tell you, it was such a high.”