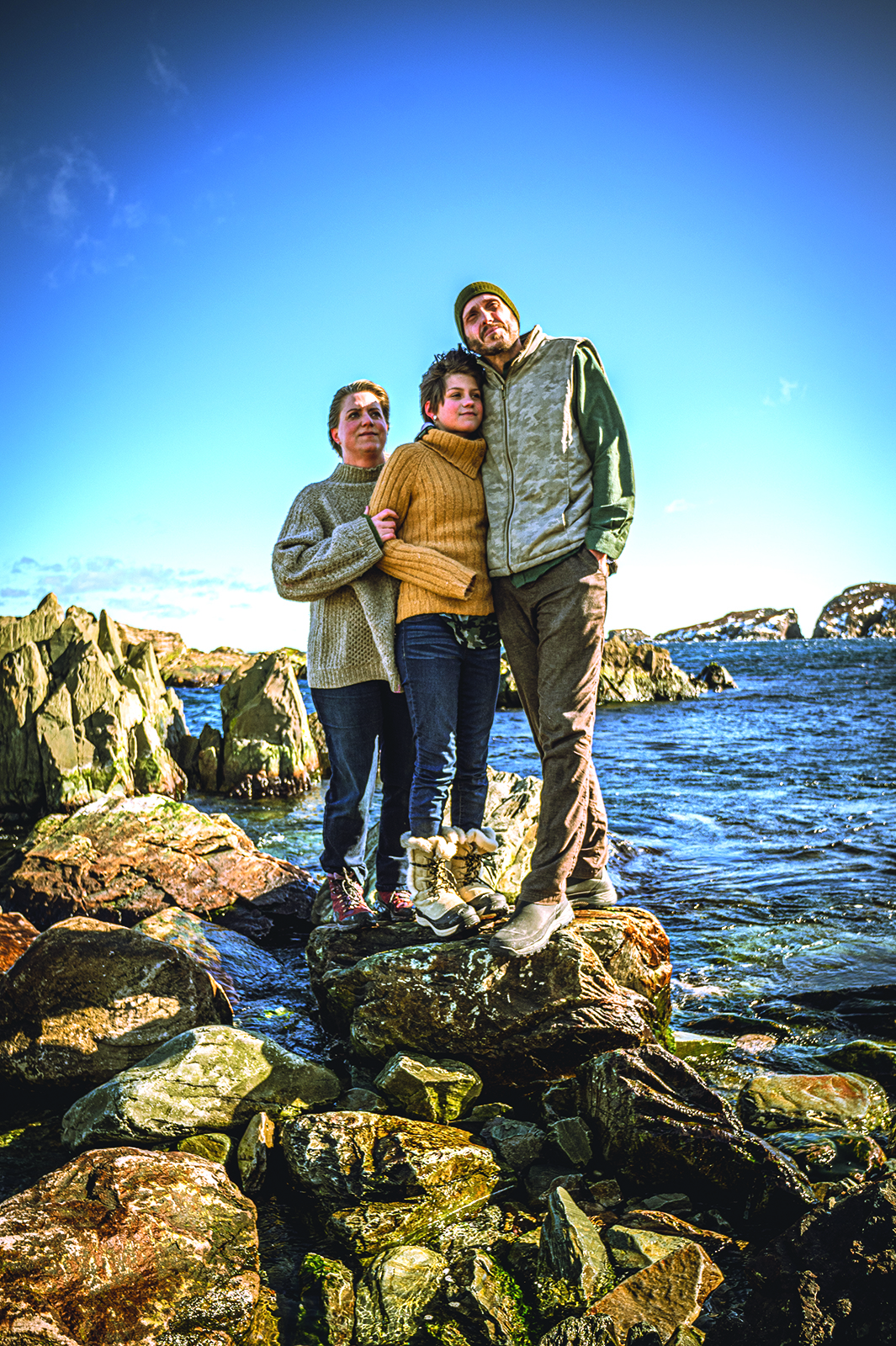 Terrence and Courtney Howell met back in 2004 while teaching in South Korea.

Both admit they can’t believe it’s been that long ago, though at the same time, it feels like they’ve known one another their entire lives.

Sitting in the dining room of the restaurant portion of one of their endeavours, Grates Cove Studios, they relax and share a plate of one of Terrence’s specialties, a Korean pancake packed with veggies and flavour, as they gaze out across the calm harbour. It wasn’t a calm night, with record amounts of wind and rain meaning they didn’t get much sleep. With multiple properties perched on the edge of the Atlantic, there’s much to tend to and fuss over. Still, tending to guests is what this couple live for, and sharing their story is worth taking a few moments from ankle-high mucky work outside. 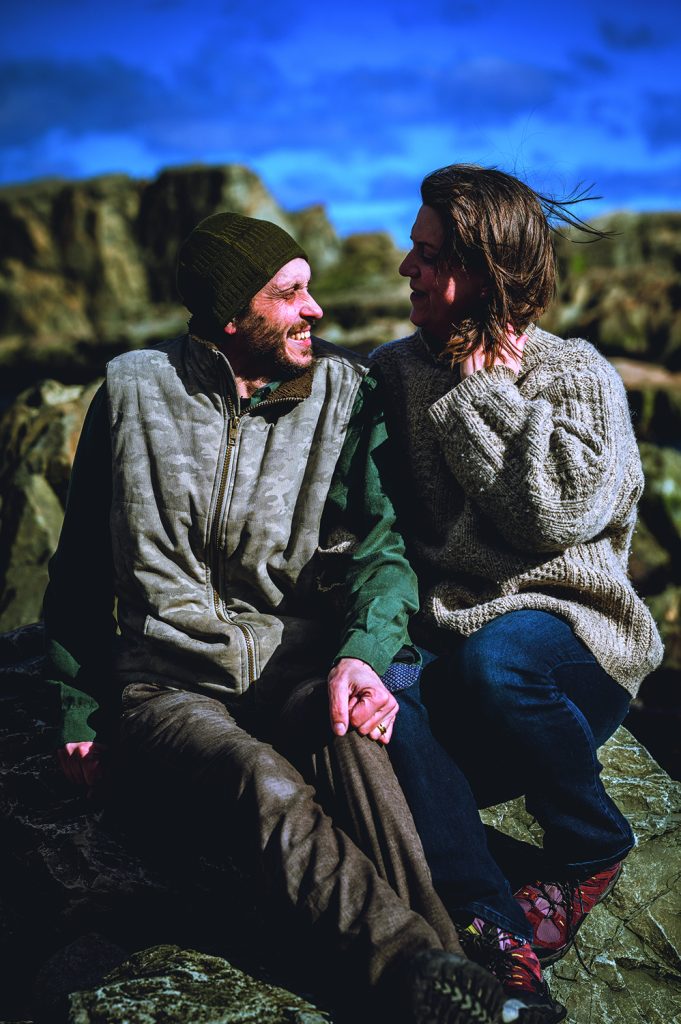 Courtney hails from Louisiana. Daughter of a shrimp fisherman, she knows the sea. Terrence was born and raised in the Grates Cove area so  being in and around the water is second nature to this artist-turned-chef and jack-of-all-trades businessman. The two crossed paths first while teaching in South Korea, sharing they “explored and ate their way across that country.” The two spent some time in Courtney’s home state of Louisiana before returning back to Terrence’s ancestral home of Grates Cove to set down roots and, as they like to say, they “once again, fell in love.”

Their website perhaps says it best. Here, in this tiny land between the barrens and the sea, they found what they were looking for. Inspiration. Perspective. Freedom. And a place they could finally call home.

“Life and time goes by quickly,” Courtney stated as she took a bite of Terrence’s lovingly prepared pancake.

“I’m originally from a small town called Chauvin, Louisiana. I always joke that it’s like a parallel universe to here. My father was a shrimper, so we lived that fishing way of life where your life is very seasonal because you work right on the water.” It was much the same, though a little different, she continued. “I lived in bayou areas close to the Gulf of Mexico, whereas here we live right on the Atlantic, but life was very similar. I feel really welcomed here.”

Was it love at first sight? we ask. “Between her and the island, or between us?” Terrence teased.

They laugh. Yes, and yes, kind of.

“I think we noticed something we had in common. We both kind of wanted to go explore a lot more than most. We started traveling together, probably within three weeks of meeting.”

Terrence had been in Korea for a while when Courtney arrived and she wanted to explore a fishing museum that was a few hours away from where they lived.  “He was the only person who wanted to come with me. I think it was that initial bus ride where we just knew. It was just such a silly bus ride and I remember how much we were laughing and joking, and we just had this amazing day. I think that’s kind of what sparked it. We were really good at being silly together.”

It’s a good thing that the attraction, and that spark is still there, because while their business endeavours are certainly labours of love, they have all been labours. From maintaining fabulous staycation/vacation spots on the ocean, to a seaweed spa bath service on the edge of the sea to a restaurant with a menu to drool over and a view to die for, these two have their hands full. There’s also Terrence’s art, and their newest adventure: seaweed. Plus, the two are parents to a 13 year-old daughter Phoenix.  They have a lot on their plate, you might say. “We have a lot of serious things going on but we can still find our way back to being silly together no matter how challenging things get,” Courtney shared.

Back when they first met, life was “very playful,” they say. How did they get from Korea to Newfoundland? Well, that’s a journey. “I always saw myself coming back and doing something either on family property or property that could be acquired here in Grates Cove. My dad and my grandmother’s from here. Coming back here was something we talked about in Korea. We talked a lot about starting a business and starting something surrounding art and food,” Terrence offered.

They thought along the lines of an artist residency.

Things “got detoured,” just a little, they say. Courtney was supposed to join the Peace Corps, for one thing, but just before she was supposed to leave, Hurricane Katrina happened.

“It was two major storms back to back, Hurricane Katrina and Hurricane Rita, and … New Orleans was devastated. I knew then that there was an opportunity for the rural communities (used to being flooding from storms) to step up.”

Instead of going into the Peace Corps, Courtney started a nonprofit to help her home state get back on its feet. Terrence was back in Newfoundland and the two kept communicating.

They decided it was time for Courtney to visit NL. “It was October and I was leaving a disaster zone. It was incredibly stressful. And then I get up here and it was a cold, wet, sort of slushy October. Everyone said it was miserable. ‘I’m so sorry that this is how you have to experience Newfoundland for the first time,’ I heard. I was like, ‘I’m in love. This is wonderful.’”

Courtney said, when you know, you know. “We started talking about getting married but I had to go back. That was the hardest thing to do, to get back on the plane, to go back to a disaster zone.”

Terrence visited Courtney a few months later – incidentally getting detained by customs for trying to bring his over-the-border love some seal meat. They married in Louisiana and Terrence became involved with the disaster relief work. “He got extremely connected to the environmental issues there and then started working on a full body of artwork called A Silent Witness.”

They were torn between the obligation to stay and help and the desire to return to Newfoundland and start a family.

Grates Cove offered what the young family wanted, they added. “Artwork requires an incredible amount of thought and reflection and privacy. This place is perfect for that kind of thinker and it just felt completely wild. I don’t like using the word magical, because that’s not quite it, but it’s close,” Courtney said.

“It was such precious time. We had the baby. Terrence was here starting to do his art again, so his woodworking was just starting to get established.”

Then, “an old United church and schoolhouse” became available. “We kept seeing it like, ‘this would be perfect. This is the perfect building.’”

But there were a few snags along the way. “It needed a lot of work. Structurally, it’s amazing, but  there was a lot of work to be done,” Courtney said.

The couple’s common denominator has always been food. From sampling their way across Korea to enjoying what Louisiana had to offer, food was something they enjoyed.  “We’ve always tried to have a minimal impact, as we really wanted this to be our home. We wanted this to be the place where our daughter grew up, but we didn’t want to be the people who came in and did things. We want to be respectful of this community. This community has so much history to it.”

‘All of its Imperfections’

They figured out a way, and opened their doors for dining soon after, Courtney continued.

“When we started the restaurant it wasn’t strategic. It was us doing what we had to do to be able to stay here. That is really what the last decade has been about. And I think we see a fuller picture now. But at the time, it was just how can we stay here? And it was scary.”

The fear wained as the love grew, however. “I knew that with all of its imperfections, this is where we want to be.”

To experience unpolished living for yourself, or for more info visit www.7fathomsseaweedskincare.ca or gratescovestudios.ca or just get in the car, drive and see for yourself