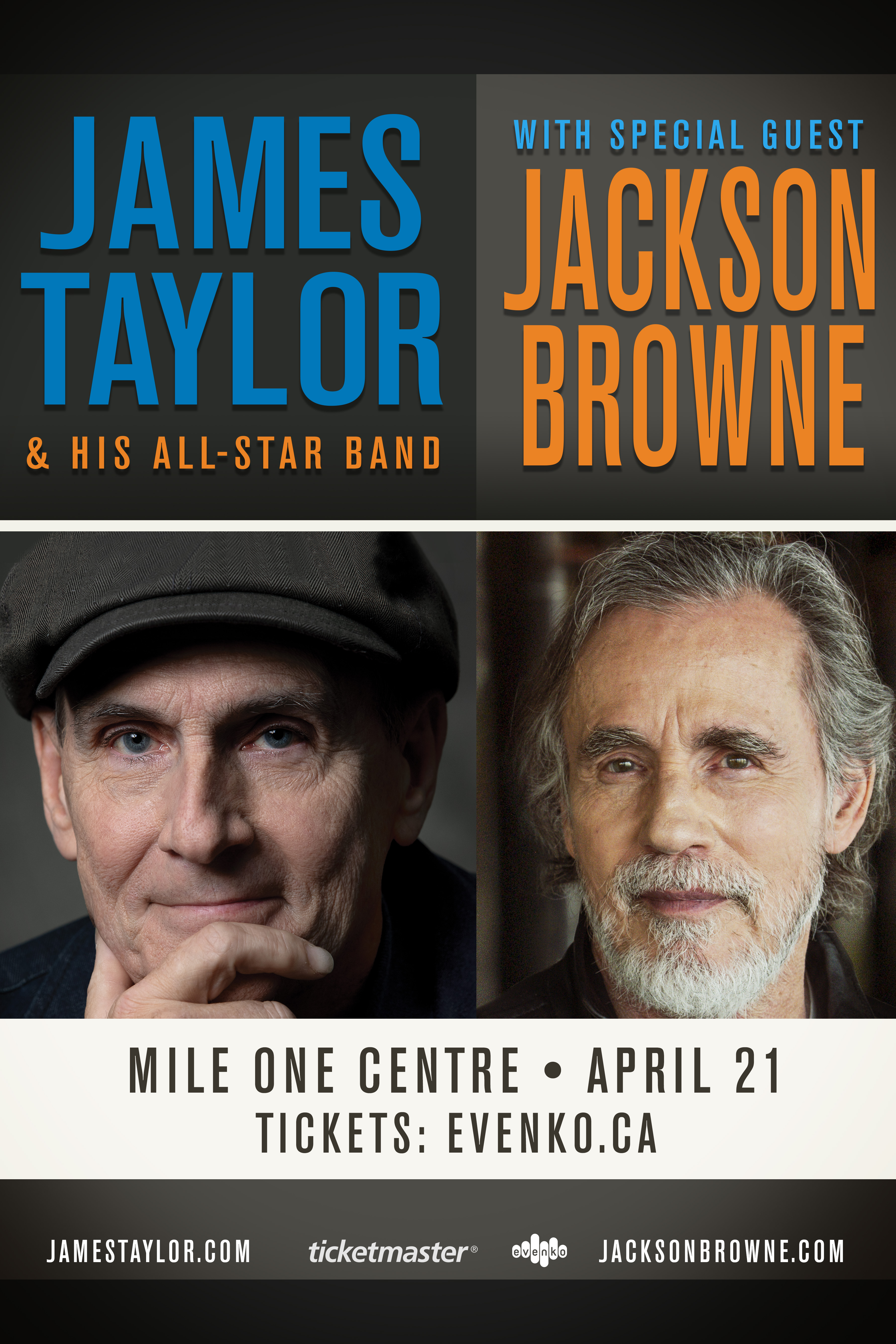 As the legendary James Taylor – along with special guest Jackson Browne – prepares to return to St. John’s to perform at the Mary Brown’s Centre on April 21st, he takes a moment to chat with The Herald about a previous visit, his next more extended stay, and, of course, his music, including his incomparable latest release, American Standard

James Taylor’s newest album, American Standard – his 19th studio album – has already earned Taylor the 2021 Grammy Award for Best Traditional Pop Vocal Album and given him the honor of being the first artist to have a Billboard Top 10 album in each of the past six decades. From Something in the Way She Moves (James Taylor) in the 60s, to Fire and Rain (Sweet Baby James) in the 70s to Her Town Too (Dad Loves His Work) in 1981, the hits have kept coming and the fans grew along with each release. Little wonder. Tunes like You’ve got a Friend and How Sweet it is (To Be Loved by You) combined Taylor’s smooth yet rawly simple tones with lyrics that held meaning. With each of Taylor’s tunes, you have music sure to please any folk/rock/pop or country fan of any age. Follow that musical lineup with the fun and playful Handyman, and you have a playlist compilation to outlast any island roadtrip or just ‘chillin’ it’ kitchen party enthusiast.

The best part for anyone with a Newfoundland or Labrador connection? Taylor has been here before, posing cheerfully with fans and staff at Fred’s Records in downtown St. John’s during his last visit and has gained an admiration for this place.

Taylor, along with his wife Kim and their sons Rufus and Henry, reside in Western Massachusetts, so the weather here doesn’t bother him, for one thing, he says with a chuckle.

“How are things today in Newfoundland?” the artist opens warmly, sharing that, “We’re actually going to be rehearsing American Standard while in Newfoundland so I can stay there for a couple of days, which is rare and wonderful for me.”

Taylor continues, adding that he “met some new friends and reconnected with some old friends,” and was shown around quite a bit the last time he visited here while on tour.  “I’m hoping to be able to connect with some of those people when I’m in town. But yeah, we get to stick around for like three or four days, which is really good,” he said.

Fans will no doubt be honoured to show the musician a grand time, we say, adding that there might even be an iceberg or two for him to see while he’s here this time around.

Taylor says, with pure genuineness, that it’s an honour to be returning. “It’s great coming back. It’s always a great thing to come to Newfoundland because it’s an extraordinary thing and an unusual thing in some ways because it’s not a place that’s on the route from one place to another while on tour,” he said. If you are going to Newfoundland with a band, that’s usually your intended destination, he added.  “You really have to want to be there. You’ve got to make specific plans to get all the equipment up and the lighting and all that stuff. So, you know, it’s an endeavor.”

But in his opinion, it’s always worth it, he added enthusiastically.

Of course, the fans are reacting to the music of a master with a lifetime in the business. Taylor’s music has long embodied the art of songwriting in its most personal and universal forms as he’s a descriptive master in a way that resonates with people everywhere. In 1971, Taylor was on the cover of Time magazine, heralded as the harbinger of the singer-songwriter era and five decades later, his warm baritone, introspective lyrics and unique style of guitar playing still cuts a path to which many young musicians aspire to travel.

His songs have had a profound influence on songwriters and music lovers from all walks of life too; Country Road,   Mexico, Your Smiling Face, Sweet Baby James, Today Today Today  and so many, many more will leave those in attendance on April 21st in awe.

Beside his many hits, Taylor will perform tunes off American Standards, an album that salutes the Great American Songbook with Taylor’s unique take on songs by writers of the ‘20s through the ’50s, from Rodgers and Hammerstein to Cole Porter and Frank Loesser and more. The albums recent release also happened to mark 50 years since the release of Taylor’s Sweet Baby James, the album that launched his stardom at the age of 21.

Why kick off the tour in Newfoundland? It’s a show that’s been in the planning stages for years, he said, and COVID has delayed things enough.  “We meant to do it in April of 2020, two years ago, and then we put things off until September of ‘21. And then even that we couldn’t make that work. So it’s something that we’ve had ready and we’ve been looking forward to really for about four years now, but it’s been in the works and in the planning stages for that long.”

So, the time is now, he added with a laugh.

“Why start in Newfoundland? I don’t know if it’s for one reason, it just seems like a good place for us for all the reasons I mentioned about. It’s been such an extraordinary place to be and to play and it was so memorable for everybody in the band. And we’re just trying to mix in some enjoyment or a sense of place in the work we do and get to know another town that we’re playing in,” he said. Mixing work and pleasure these days just seems to make a whole lot of sense, the 74 year-old added.

Bottom line; they were songs he knew and knew well.  “I played them on the guitar. I sort of developed a guitar arrangement and they were part of my learning and sort of expanding (my skill) as I learned to play these songs.”  He also felt that the album was “just something that needed to be done.”

“There were songs and arrangements that I had as a kid and that I really wanted to record at some point in my life. That was the main reason to make that album. It wasn’t so much that we’re turning to a nostalgic place or looking for a simpler time – a less complicated time – it was more just about having this batch of tunes that I had arranged on a guitar over the years and wanting to turn it into a project, wanting to get it down on record.” We ask about the significance of special guest, Jackson Browne.  “Jackson and I have had very parallel and very similar  life paths and … starting in the late 60s we came out of the box at about the same time and we sort of represent a kind of a singer-songwriter movement,” he said.

They are very similar, he continued. “One of Jackson’s main focuses and mine too is maintaining a sort of a musical community with whom you have this shared musical life. And one of the real achievements of a career is to basically have a band, have a group of players with whom you collaborate. And that’s Jackson. That’s like the most important thing is his relationship with his band, his crew and obviously his audience.”

And their fan base seem to “get along well,” he adds. “That’s been another interesting thing about this tour because Jackson and I, I think our audiences get along well and it’s a whole thing that you feel as an artist and that the audience seems to respond to.”

Things have been going so well, he added, that he simply wishes for more time to keep doing what he loves.

“For me, it’s been great. And I wish (touring with Browne) could go on forever. But for the time being … this will be the end of our year of touring together.”

For more, including getting tickets for the show at Mary Brown’s Centre on April 21st, visit mbcentre.ca or www.jamestaylor.com