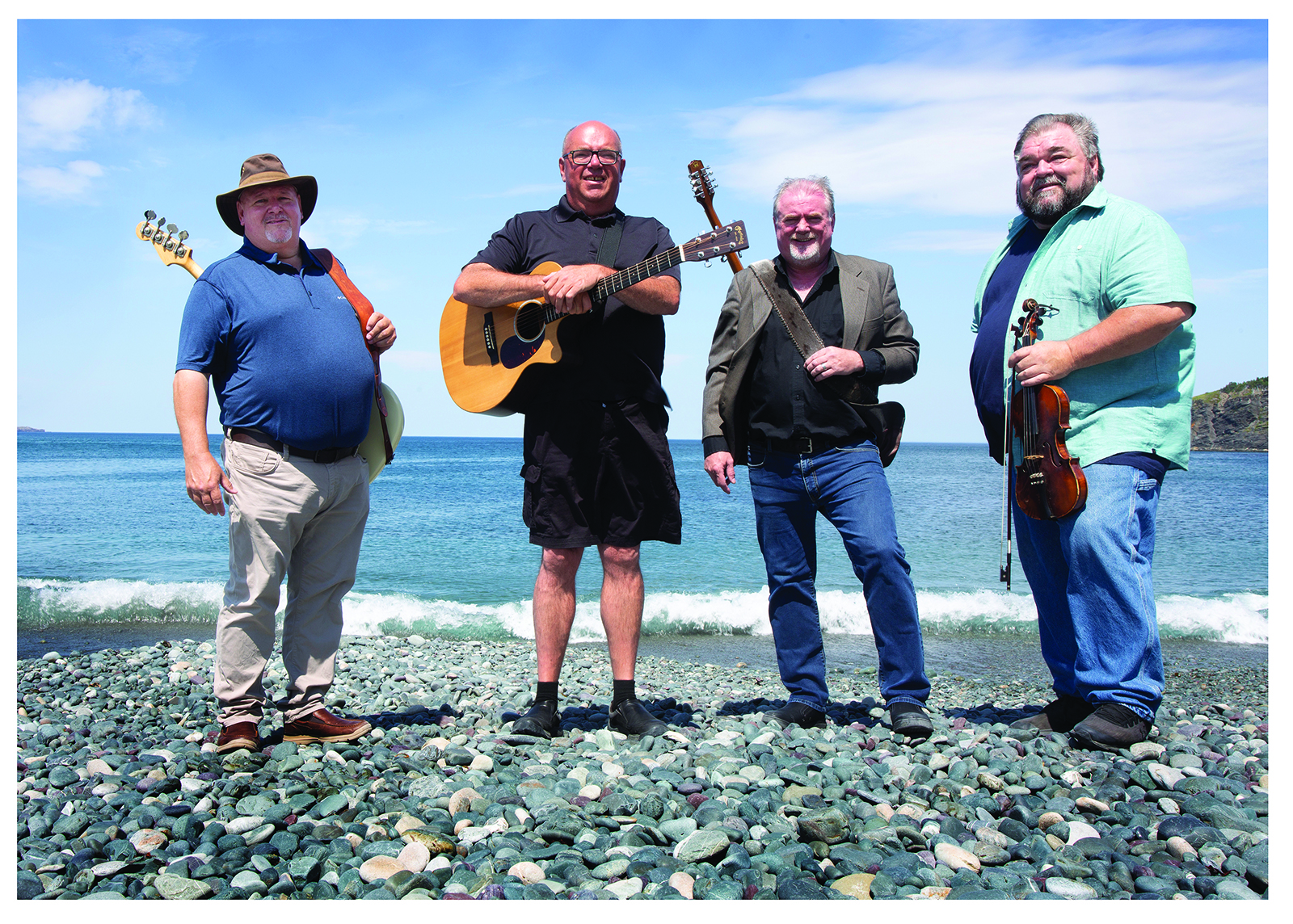 Reuniting for Come Home ‘22 celebrations during Churchill Park Music Festival, the original members of The Irish Descendants do a little sea-side reminiscing

Gathering in the boardroom turned photo studio at The Newfoundland Herald on Logy Bay Road, the original members of The Irish Descendants take a moment to pause at the front entrance.

In the lobby there’s a poster that pays homage to The Herald’s dedication when it comes to highlighting 76 years of entertainment legacy, and the b’ys are part of that memory wall.

The Herald cover the band members point to is from 1991 and features Larry Martin, Con O’Brien, D’Arcy Broderick and Ronnie Power on a grassy knoll overlooking Middle Cove Beach. The picture was taken by then Managing Editor Bob Hallett (later to become famed member of Great Big Sea) who recalled standing on a step ladder from home to capture that snap 31-years-ago.

The picture brings back so many memories that we pack up and head to that very spot to recreate the now iconic photograph. Broderick recalled how Hallett “tipped a few times” while snapping the photo and O’Brien proudly announced that he still has the same sports jacket – one he bought while in grade nine – and it still fits!

We ask – after all the years performing on various musical and other projects on their own and with others in the business – why reunite now? 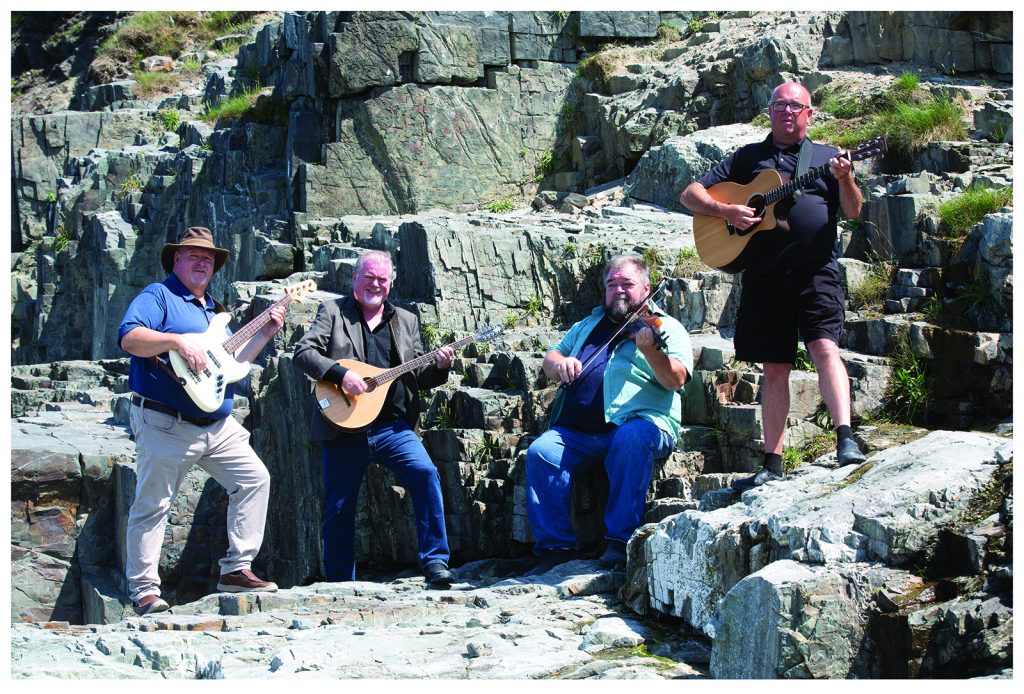 The group performed at Iceberg Alley in 2021 to much fanfare and the “warm welcome” is part of the reason why they decided to do it again, they share.

“I guess popular demand dictated that. Peter Quinton (promoter and organizer of Churchill Park Music Festival) approached us and asked us to do it again. And there may be potentially other shows come out of it, which would be lovely. And we had a ball last year doing it and the show itself was magic for us and it went way too fast almost,” O’Brien began.

Broderick nods. “We were rehearsing for ten days or so and it was a lot like when we first started over in Ronnie’s mom’s and dad’s basement back in 1990. It was almost a similar feeling to back then. Back then we did a big show right off the bat. We did the Hangashore Folk Festival, and that was a big deal back then, and that was the first show we ever did and NTV recorded it,” Broderick shared.

It “felt right, right from the start,” he added, and that’s what reuniting feels like now as well.

There’s a feeling of nostalgia of course, but the excitement about performing together is mostly about the music, O’Brien said.

“When we started first, there was other Irish bands playing and putting out records. And we came along and one of the things that we were really noted for  – now I could barely play guitar – and here’s D’Arcy, one of the best fiddle players in the world, but what we had together was harmony and that was unique and the arrangements we did were really special. It took some time to think about what we’re doing, but when we figured it out it ignited an excitement for the audience,” O’Brien said. 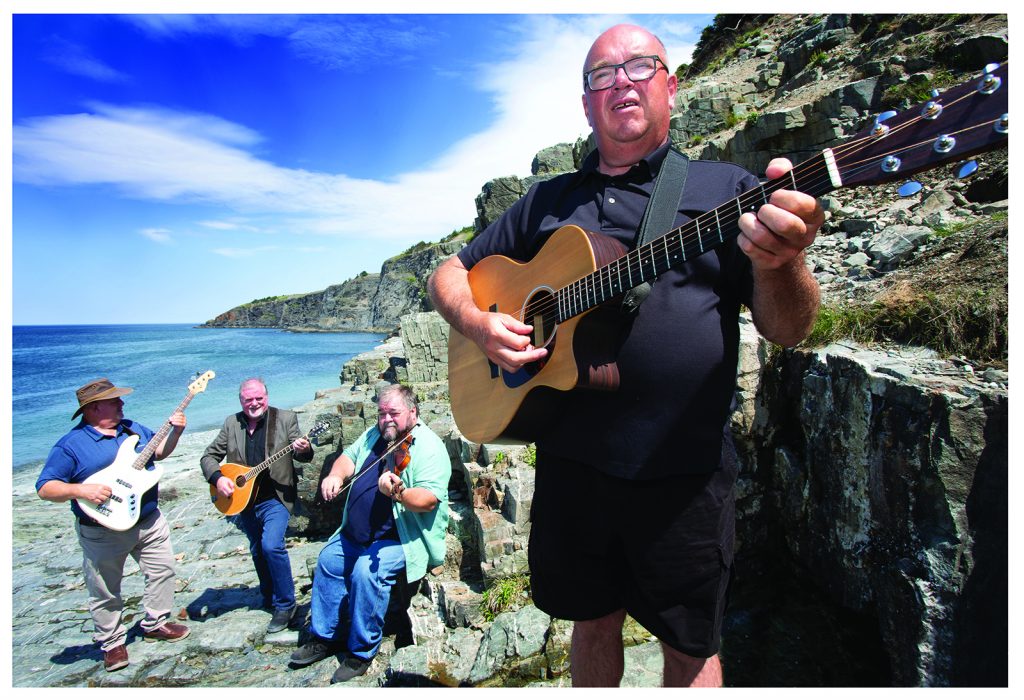 Plus, the timing was right too. When they started – years before Great Big Sea took the world by storm – they looked towards the traditional performers.

“When we started we looked at Ryan’s Fancy and Son’s of Erin and The Irish Rovers and The Clancy Brothers and we were following in their footsteps and we didn’t think that the day would come that people would look to us in the same way when it came to performing traditional music. It’s kind of a cycle, and we’re proud to be part of that,” Broderick said.

Power laughed. “Last year when we were performing, the people nearest the stage weren’t even born when we started out together, but they heard the music from their parents and they heard it on shows like Jigs & Reels on radio and they knew them all and were singing right along,” Power said.

One of O’Brien’s favourite songs to perform is Cape St. Mary’s. Why not Rattlin’ Bog? we tease. They laugh. O’Brien remembers a time when a certain bar patron at Erin’s would pay $50 bucks if they’d play Rattlin’ Bog a second time.

As we get ready to pack up from a beach photo shoot 31-years in the making, we ask if there’s anything else they wanted to add. They share that they wanted to thank the fans for sticking around, for one thing. Irish music devotees are the best crowd, Broderick said.

O’Brien couldn’t agree more. “We can’t wait to see everyone. And a big thank you again for all your support at The Herald. You’ve always been there even after all these years. We want to encourage everyone to come to the show. It’s going to be a good one.”

The Original Irish Descendants will take the stage on Sunday August 14th along side The Masterless Men, Bud Davidge of Simani backed by Chris Andrews and Mark Hiscock, Celtic Connection, Kubasonics and Carolina East at the Churchill Park Music Festival.