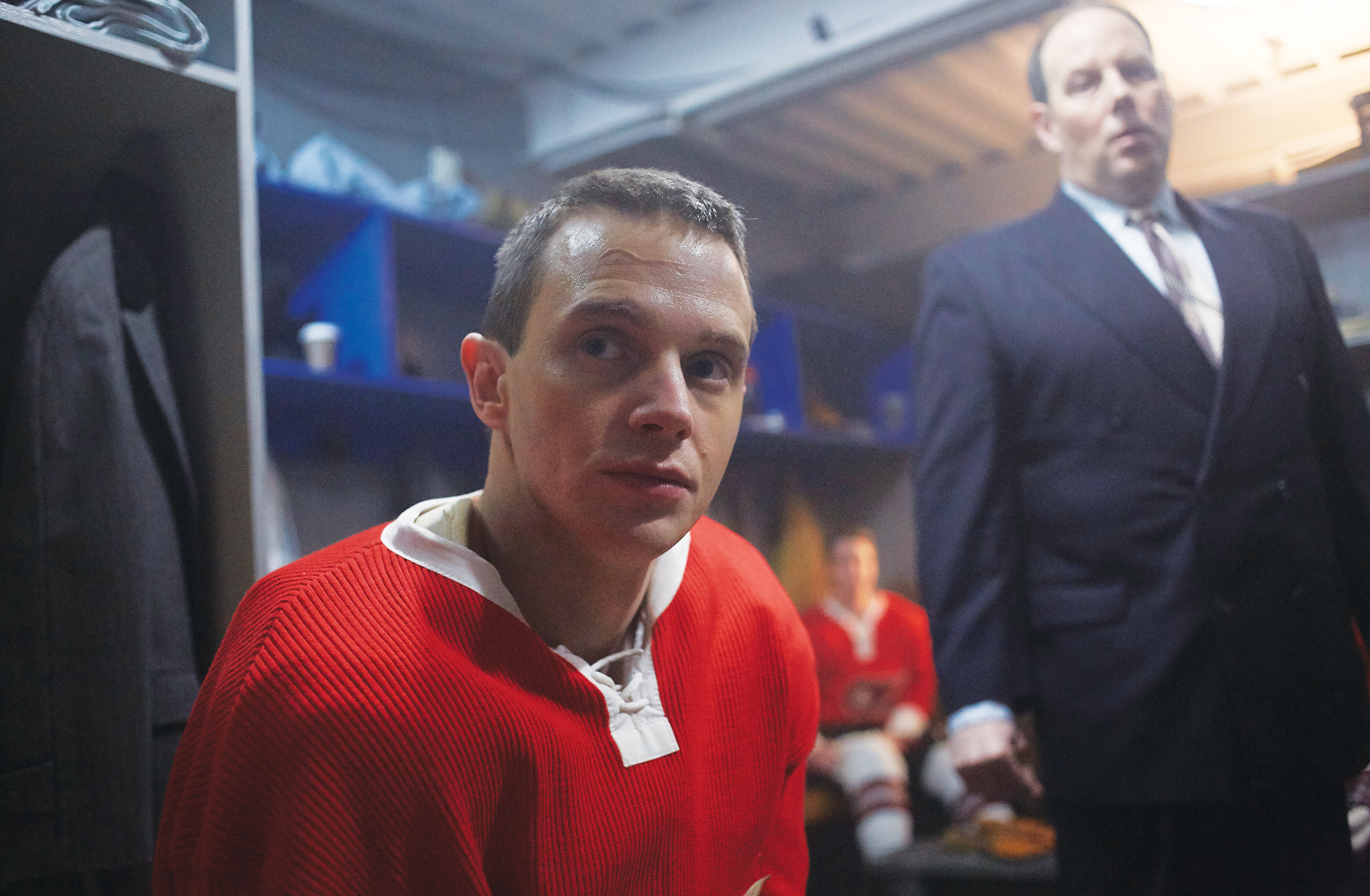 From beloved standout in Republic of Doyle, to lead in the emotional biopic Goalie, Paradise native Mark O’Brien remains humble through his ascent to stardom

Perhaps quietly, Paradise’s own Mark O’Brien has had one of the most impressive rise through the ranks of Hollywood of just about any Newfoundlander and Labradorian working past or present.

Yes, Hynes and Hawco and Henstridge and Walsh have been entertaining the public and melting hearts across a decade or two, but O’Brien has shared the screen with the likes of Jeff Bridges, Amy Adams, Forrest Whittaker and Hugh Jackman. And he’s only now hitting his stride.

It’s been quite the strapped-in rocketship ride for O’Brien. He’s come a long way from the bright eyed and charming lad who turned hearts to jelly as Des Courtney on Republic of Doyle. Ahead of the release of his debut turn as leading man in the Adriana Maggs biopic Goalie – on the troubled life and times of iconic goalie Terry Sawchuk  – O’Brien pondered his rise to prominence, one which saw him appear in no less than seven film productions in 2018, with a 2019 calender that is no less busy.

“I kind of just put my head down and knew what I wanted,” O’Brien begins. “And right place right time. I don’t believe in luck per say, but I think it’s about preparing yourself for the lucky break. Things come together in a way, but you have to be prepared for them. I worked really hard and I’ve gotten to work with a lot of people I really admire and I have a great team supporting me.”

That support extends beyond an ace backing staff and loving friend and family base. O’Brien’s home-province of Newfoundland has watched his rise to prominence with interest, something the career actor has felt, with appreciation, on sets from Hollywood to New York and beyond.

“I have a lot of support too from Newfoundland, and those things matter when friends you haven’t seen in 20 years send you a message. That support propels you forward and it really helps you a lot, because as an actor sometimes you don’t know when the next job is coming, you don’t know when the next anything is coming. It’s either you get down on yourself and impatient, but when you have support, that’s what you need in any position in life, people supporting you and believing in you. I have a really good support system like that in my family and my friends.”

In Goalie, O’Brien re-teams with fellow Newfoundlander Adriana Maggs, who directs the stirring and at times dark portrayal of the enigmatic Terry Sawchuk, one of the greatest goaltenders in National Hockey League history.

It was, to say the least, a meaty role for the rising actor, who jumped at the chance to portray a complex and at times challenging personality.

“Everything I learned about him, he kept his emotions pretty to himself,” O’Brien explains. “Even if he appeared emotional the reasons for it was kind of kept within. Playing someone who isn’t showing what they’re feeling all the time. His nature wasn’t always easy to pinpoint, so it was kind of hard to tackle in that way where it’s someone who is not wearing their emotions on their sleeve completely. It’s someone who is kind of confused.”

“For me, based on the script and the biography, there was a lot to draw on from his brother and his brother’s death at such a young age. He died from a heart attack when he was 17 years old, and he taught him all about hockey. That really formed a lot about who he is, his drives, his frustrations and his loss. It was definitely tough to tackle, but also a great challenge too.”

While O’Brien is no stranger to lengthy shoots through television series from Republic of Doyle and Halt and Catch Fire, to supporting turns in films like Anon and The Front Runner, Goalie is his first step up into a leading role, a demanding ask that went far beyond the pages of the script.

“I spent a lot of time on set in the last 10 years or more, a lot of hours there. But it’s different when you’re shouldering and you’re carrying through lines in every scene, acting-wise,” he admits.

Weight of the Role

“That was a transition for me and something that was different, and just the physical weight of the thing. In between shots, we did four different stages of facial scarring that Terry had over the years. We don’t shoot in order, so I’d shoot one scene where I’d have his scar from 1954 and then I’d have his scar from 1960 and into the next scene. There’s no break of go relax in my dressing room and read over my lines, I have to go back to the makeup trailer and change the scars over. A lot of time I was in hockey gear so there’s nowhere to go, sitting at the rink in hockey gear.”

The rigours of shouldering a feature film are amplified when you consider that O’Brien’s daughter Penelope was only five months old at the time of shooting. His frequent collaborator and loving wife, fellow actress Georgina Reilly, stars alongside O’Brien in the film.

“Penelope was only five months at the time. She was with us, in the trailer. It was a family affair to go home and now it’s daddy time for 20 minutes, a half hour and then we all go to bed. It was challenging in that way and it was new for me. There wasn’t a lot of sleep, but Adriana was so wonderful and so prepared so it made it really easy. And I love acting too. I don’t like talking about there are challenges. It’s a privileged position and I loved every day I was on set at the same time.”

O’Brien admits that everything about his life and career changed with the birth of his daughter. Priorities, lines traced for the future, everything seemed to intersect through a beautiful baby girl, and he’s all the better for it.

“I used to get home and it was like oh cool, what am I going to do for the rest of the day. Now I go back to my other job. It’s wonderful, it is a blessing. Penelope is such a great baby. It’s all good stuff. I have such a privileged position to be able to come home to a wonderful wife and daughter after doing what I love for a living.”

Goalie is not the first time that O’Brien and Reilly have collaborated on screen, but it may in fact be the most intense shoot, given the at times frayed dynamic between the characters involved. While there is weighty material, O’Brien insists that, as actors, both have been so open and transparent in the presence of the other that there is little left to the imagination, adding a comfort level that can’t be bought or sold.

“Georgina and I have worked together a number of times now, but it is a bit of a transition you have to get into. It’s funny. Adriana had asked us once ‘are you comfortable working together like this?’ We have done so many auditions together that we have seen each other in so many different characters that now it’s not even odd anymore. We’re both actors, so if one is doing a job the other is helping with the lines and going over the scenes. We’re so used to seeing each other in different ways that we actually know each other so well, which actually makes it that much easier.”

Reflecting on his home province, O’Brien gushes on the trailblazers who have sculpted and shaped the film and television industry – folks like Paul Pope and Barbara Doran, who laid the groundwork for actors like him, and for studios like Take the Shot Productions, who today lead the charge for a thriving industry on the island.

“Allan (Hawco) and all those guys at Take the Shot Productions really changed things. There have been a lot of great people working for a really long time there, Paul Pope, everyone at NIFCO, Justin Simms and Roger Maunder, Rosemary Howse and Barbara Doran.”

“These people paved the way for my generation. I think Take the Shot really took it to another level where all of those people are working together in different ways. It’s really wild how much goes on in Newfoundland. For me, I always want to come back and shoot things. There’s things I want to do there now I want to go back and do.

Never straying too far from his tried and true medium of television, O’Brien has been cast in the Showtime drama City on a Hill. Produced by A-listers Matt Damon and Ben Affleck, O’Brien stars as one of the series leads alongside award-winning veteran Kevin Bacon.

“It’s so exciting because it’s a dream team of people I’m working with,” he says of the upcoming series. “It’s Ben Affleck and Matt Damon, James Mangold who directed Logan, Barry Levinson, Tom Fontana, Kevin Bacon. Working with these people, they’re all my idols and it’s a role that I love.”

“The show is so honest and true to the time period into what was happening then. It’s thoughtful in a very interesting way. It’s set in 1992 Boston and it’s a changing of the guard in that city in that particular time and how that happens.”

Using his own unconventional career path as example, O’Brien encourages prospective actors to believe in their abilities, and not give in to the relatively easy doubts that creep up along a road that, at times, closes more doors than it opens.

“For me, I grew up in Paradise. I love Paradise, I spent the first 19 years of my life and went to school in Paradise, but it wasn’t like that was a place where a lot of actors or artists that I knew of came from. I didn’t grow up that way. I grew up as an athlete playing hockey, baseball, basketball. I wasn’t interested in the arts. My sisters were interested but I didn’t even pay attention to them because I didn’t want to go watch plays.

“It crossed my mind many times, how would I even do this? I have no connections in the industry, I have no professional training, I’m 19 years old and this is impossible. I had that thought and I just immediately put it away.

“I watch people on screen, I watch Edward Norton, Robert Downey Jr. and Denzel Washington and just people who were great at one scene in a movie, good acting. I thought if they can do that, then I can do that. I don’t know if I can do that as good as them, but I can do that because someone did. If someone else can do that, I can do that. I had a lot of challenges. I had no financial backing, I had student loans and I just kept going. If you’re an actor and you’re reading this, it’s the most important thing to never assume that you can’t do it.

“Everyone out there at one point thought they couldn’t do it, but then they put that away and they decided to do it. Take every opportunity you can, enjoy your life outside of the business, because that will make you enjoy the business that much more. Keep your friends close, don’t work with people who don’t make you feel good, and let your passion inform you and just keep working.”