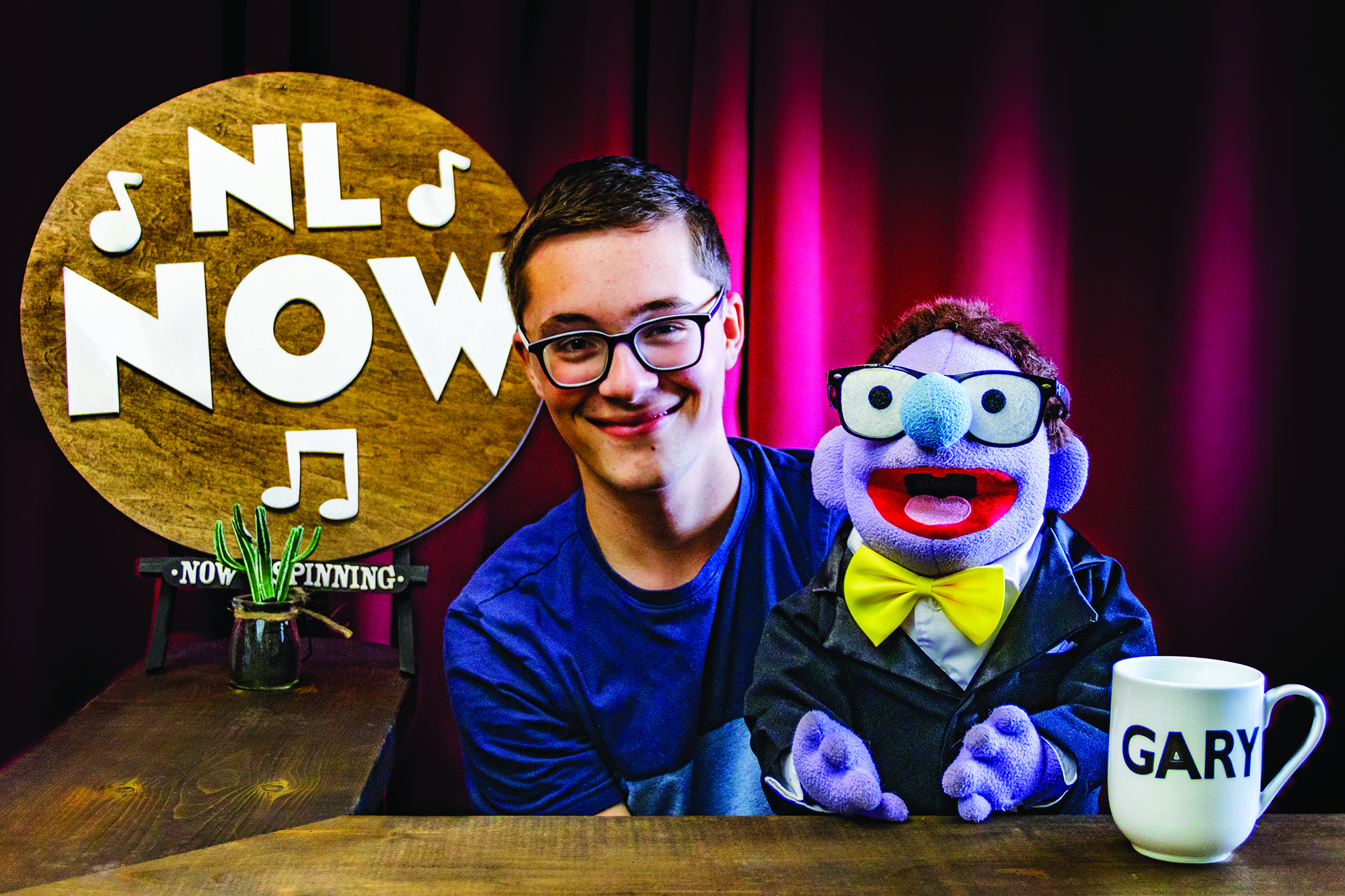 NL Now’s Jake Thompson shares how it all began, plus what’s next for the hit NTV
home-grown series starring the soft-hearted Gary Wheeseltin

It’s  season number two for NTV’s NL Now and Jake Thompson and side-kick Gary graciously allow us to hang out on set when we visit.

Of course, the set is his basement, and the teen’s father buzzed around upstairs as the interview began. Speaking of buzz, the show has certainly generated its fair share.

There were some nerves when things first began, he offered, though he was always passionate and committed to the show and its direction. The response from the fans prove NL Now is heading in the right direction.

“The reactions have been really good. I’m really sometimes surprised hearing all the different people saying they’ve seen the show and enjoyed it and when they say they love all the different guests that we’ve had. But that was always the vision for the show, so I guess you could say it’s a success.”

But this series, run by a puppet named Gary, isn’t just all fun and games.

“Usually at the beginning of a season, I’ll start with a big list of names and of course, I have to make the list a lot longer than the guests we need, because sometimes someone can’t get in because of scheduling and different things. So, I’ll start with the big list. I pick interview subjects and musical guests that I’m interested in myself to make it easier to interview them, of course,” he explained.

We ask where the roots of the show came from. Essentially, he always loved puppets. From The Muppets to Sesame Street, he’s watched them all. Then, when birthdays and Christmastime came, those in his circle began gifting him puppets. “I always used to do little puppet shows at family parties and that led to doing little YouTube videos.”

In one of those videos he had his puppets act out an NTV News scene. From weather to news, he had it all.

“I was about 10 or 11, and I did an NTV News thing. One of the puppets was Glen Carter … and we had an Eddie puppet read the weather and everything. And that was only like a little two minute video that I did. My mom put it on her Facebook and it started to get shared around a lot. And I was really surprised because, I mean, I was only, like I said, 10 or 11. And, you know, I didn’t think it was that good. I’d only done it myself on my iPad.”

Well, the video gained traction and started to get shared around. “I remember Eddie (Sheerr) shared it and a lot of his Facebook followers then saw it. And from there I realized that people might actually be interested in seeing some more things. So I went through a few ideas and then we landed on the puppet host, a talk show, and Gary became the host.”

Thompson has his sights set on a third season, naturally. But for him, each season he puts under his belt is another opportunity for growth, personally and professionally.

“Hopefully we’ll do a third season and hopefully some more after that. But, you know, I love seeing how much the show grows with every season. You get new viewers tuning in and with every new guest, you get more of their fans tuning in and then they stick around and they keep watching every episode. So it’s great to see how it’s growing so much and how much better it gets.”

We talk a little about “behind the scenes.” What goes into hosting a show at such a busy age? With school and family and activities, it’s quite the balancing act, he admitted.

“Once I get a guest confirmed, then we get a date locked in. I’ll start coming up with some ideas for the interview. A typical show has one interview guest and one musical guest. They’ll be a song at the beginning and a song at the end. So for both of those guests, I’ll just start by doing a little bit of research on them. Usually I know a little bit about the guests already, so I’ll start with that. And then I’ll do some research, see what upcoming projects they have to talk about, and then I’ll usually check with them before the interview. If they have anything different they’d like to mention as well, then we will fit that in.”

There’s been no one favourite guest, though Rick Mercer is up there. So is Alan Doyle. But they’ve all been great, he added. From Toni-Marie Wiseman to Eddie Sheerr, it’s been a blast, he added.

When he’s not playing TV star, Thompson shared he’s “just like any kid.”

“I go to school. I just started grade 11 last week at Waterford Valley High. When I’m not in school, I’m working on this and working with puppets. And when I’m not working on the puppets, I’m in school. So I don’t do much else really. But I really enjoy doing whatever I can to learn new things with the puppets and learn about building them and  I spend a lot of time at that as it takes up pretty much all of my time.”

As a mom myself as well as an interviewer, it has to be asked: ‘What do you want to do when you grow up?’ I ask.

“Definitely something related to the film and TV industry, like anything related to puppetry. I just finished shooting another show with Ruth Lawrence … and then it was my first experience on a  bigger scale show with a real crew and everything. I co-wrote it with Pete Soucy. So I really found that interesting doing the writing part of it as well. It’s called The Adventures of Gary and Lou. And so it’s sort of a spin off type thing from NL Now. It’s more like a children’s educational series all based here in St. John’s. And we have a bunch of cool guests and stuff on that one as well,” he shared.

We ask if he felt he’s inspired other youth to follow their dreams.

“I’m not sure I’m there yet, but hopefully someday,” he said with a smile.

With show fans like Scott Stirling and  Chris Andrews, there’s little question he’s had an impact. “I started grade 11 last week and it’s funny, some of the teachers know me. When I walk in they’ll say, ‘that’s the puppet kid,’ when they see my name on the attendance, but then some of them won’t know me.”

When asked to introduce themselves to the class, like what happens every new school year, Thompson says that’s always fun.

“You know, ‘say your name and your grade and one interesting fact about yourself,’ and when I say that I have two TV shows they’re like, ‘really? Are you joking or what?’ Like the poor kid. He thinks he has a TV show,’” he laughed.

In on the action

Gary wants in on the action, as he should, as he’s officially the show’s star. Thompson received Gary as a birthday gift and the two have worked together since. Gary was a “going out of business sale” at a store in New York. An online purchase, Thompson shared he can’t quite recall how the name ‘Gary’ even came about. But it certainly fits.

“I think it’s just one of those things. You know, he kind of looks like a Gary. Gary. Yeah. That fits.”

Any final thoughts before we leave him to his evening at home? Thompson pauses. “Definitely everyone should watch the new season coming up. Twelve great episodes and there’s a lot of fun, great guests and a few other special surprising new segments.”