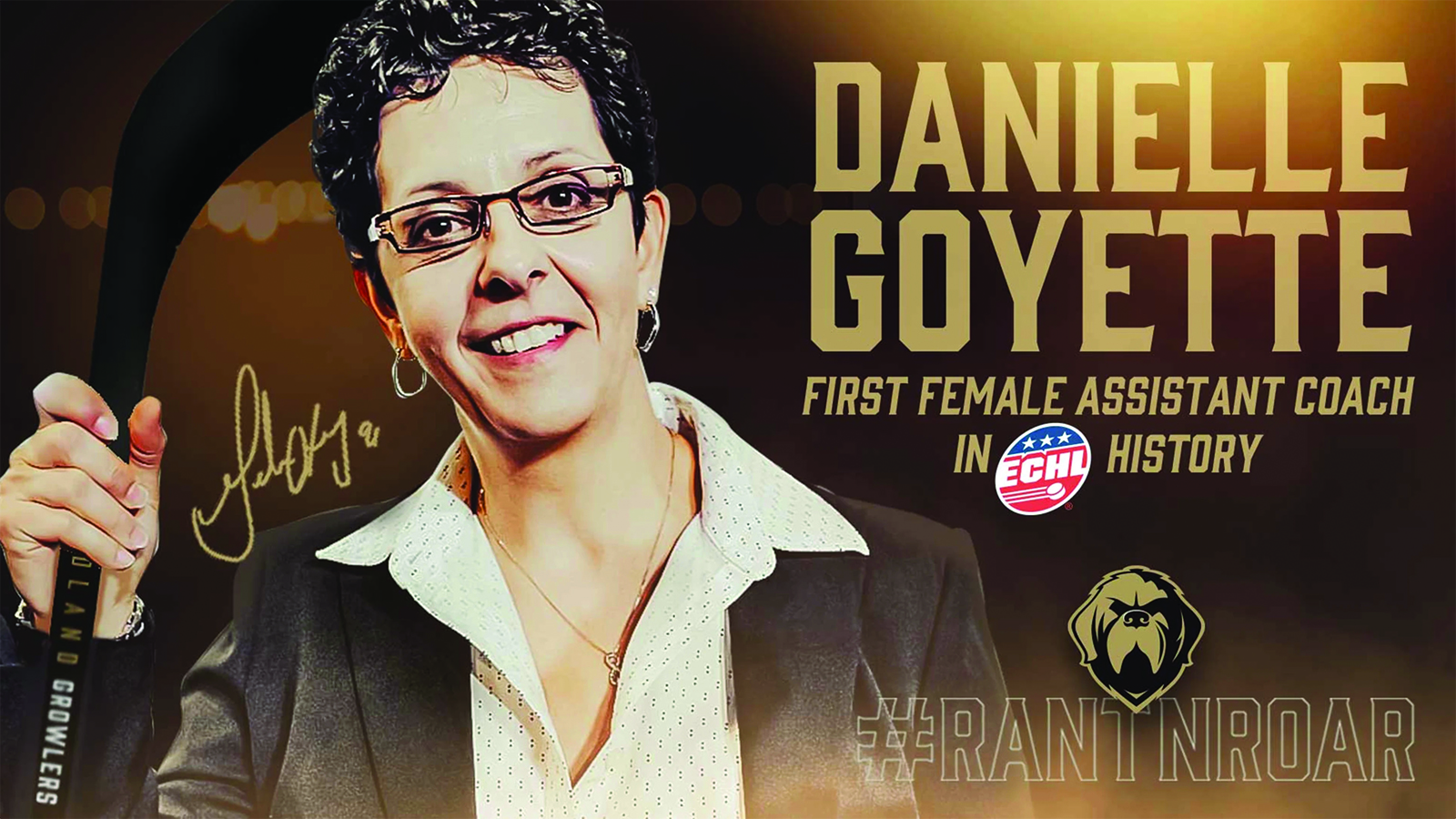 For many a hockey fan or Olympic follower, the name Danielle Goyette just might ring a bell. Goyette was head coach to the University of Calgary Dinos women’s hockey program, helping them win a national championship in 2012. That same year, she also served as assistant coach for Team Canada at the World Championships and later, at the 2014 Olympic Winter Games in Sochi, Russia, she helped Canada win gold. 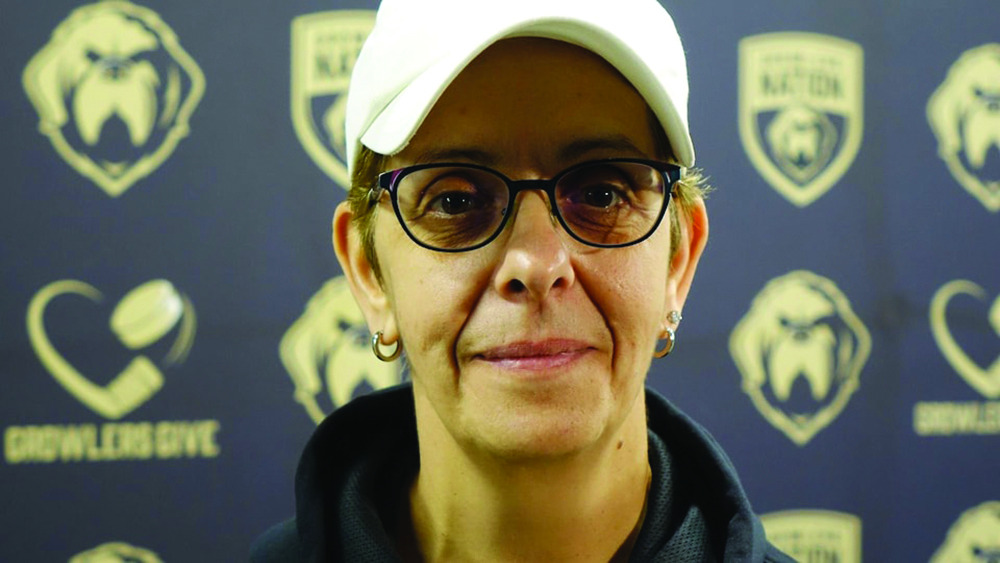 Why so much fanfare over this champ here in the province of Newfoundland Labrador? The reason is simple: Goyette joined the Newfoundland Growlers behind the bench, stepping in temporarily on the coaching staff after head coach Eric Wellwood entered COVID-19 self-isolation. This step back for Wellwood was one giant leap for Goyette, making her the first woman in ECHL history to take the reins as coach.

Goyette has been part of the Growlers family, as she joined the Growlers’ parent club, the Toronto Maple Leafs, last May to serve as director of player development.

The games played on Feb. 3rd, 4th & 5th against the Reading Royals at the Mary Brown’s Centre in St. John’s didn’t go as hoped for a variety of reasons – many of them COVID or call-up related – still, Goyette remained positive.

The weekend she was here there were no fans in the stands due to NL’s Alert Level status and public health protocols. If that wasn’t enough to dampen spirits, the weather was wet and windy. Having just left Toronto, and a record snow storm that shut down the city no too long before,  Goyette – who hails from Quebec – said she wasn’t concerned one bit.

“I’ve been here before, and I prefer rain over four feet of snow, though I’m used to a lot of snow. Where I’m from, snow wasn’t a problem for us to drive in, but to see some people from Ontario trying to drive in the snow with a small car and no snow tires, it was kind of interesting,” she opened with a chuckle.

Other things are not quite as light, however. Facing the loss of Chris “Abbo” Abbott, the heart and soul behind team mascot Buddy the Puffin, was one thing. COVID protocols were another and some players were sidelined, along with the team’s coach. Other players had been called up to the Toronto Marlies or to the Manitoba Moose while other teammates were out with injuries.

Still, Goyette was cheerful. “It’s been awesome. So welcoming. This is my third day and I feel I’ve been here for two weeks and it’s just so easy to get along with people. Everybody’s helping each other. The people are so easy to work with, especially the coaching staff,” Goyette said.

On finding out she was the first woman to hold such a coaching position, she paused, then shared that she had “No idea. I just found out when I landed … I was coming here because I wanted to help the team.”

On the challenges, she remained focused. “This is a hard business. It’s not easy because you have to be able to adapt in a blink of an eye,” she said. 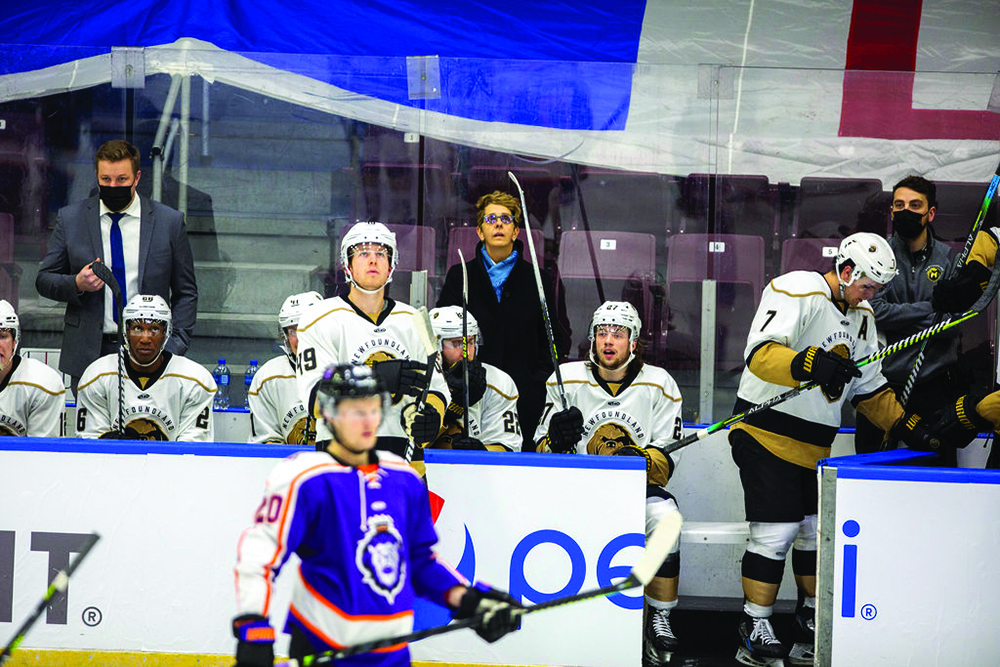 “We didn’t get the win, but the way they played, that’s the way that we need them to play every game.”

With some fisticuffs, an overtime loss and a shattered stick, there was excitement. “I love it … (the energy) put some excitement into the game. When you get scoring in overtime, I think the guys got a bit disappointed and frustrated. That’s (broken stick) going to happen. I would not suggest any kids to do that. Sticks are too expensive,” she chuckled.

Goyette has had a fabulous and much decorated career, and with her Olympic history, we ask if she’s been watching.

When she can, she shared. “It’s pretty amazing. It’s funny when you watch (the opening ceremonies) as it brings back the memories that I had from the Olympics. The feeling of walking to the stadium (as a flag-bearer) came back.”

“When they walked with the flag, it’s something that you can’t explain. But I was so proud of them because that’s to say that they are making a big impact in Canada sport.”

Brad Gushue was an Olympian back in 2006 when Goyette was there. Did the two meet? She laughed. The short answer was no: they were much too busy competing to socialize, but they did cheer one another on.

“You play so many games. When you are done, you focus on the next. (Team Gushue) made Canadians proud.”

She’s from Quebec and works for the Leafs. What about the Canadiens, we ask? “It’s all Canadian hockey, the Maple Leafs or Canadiens,” she laughed.

Goyette admitted, when she first got the call to join the team, she hesitated.  She spoke to her best friend who said “Go for it.”

“She was right, and every decision that I’ve made that was outside my comfort zone always had good results. I always say to people, if you don’t risk nothing you’re going to get nothing in return and this is how I try to live my life.”

It was the same when she made the decision to head to NL to coach the Growlers.  “They asked me if I would like to go to Newfoundland and coach with the Growlers. I’m like, ‘Oh my God, no,’ but after that, I think, ‘you know, I like being part of the team. I’ll do it.’”

Now that she’s broken yet another so-called glass ceiling, what’s her hope?  “Now that we’ve had the first female  coach, I’m hoping we’re going to see more females in the game on the bench,” she said.

As to finding out she’s the first female to do so in the ECHL’s history, she remained fairly chill.

“Maybe when I get home I’m going to say, ‘OK, that was pretty cool,’ but right now I’m enjoying being part of the team and I’m thinking about the next game and how much we want to win because I’m not a good loser. As a coach … we have to bring the energy and make sure that (players) feel that for the game.”

Win or lose, Goyette says she’s been feeling like part of the family. “There’s a great sense of community here,” she opened, referring to the fact that the Growlers helped shovel locals out after Snowmageddon in 2020.

“That’s pretty amazing. The connection the players have to the community, it’s great for kids to see that as it inspires them to be involved and be active.”

Thinking of the overall experience, Goyette’s happy she came.
“This is a great experience. I won’t forget it. Sometimes I have to pinch myself and say, ‘Hey! I’m working for the Maple Leafs!’ It’s crazy. Especially, you know, I grew up being a Montreal fan and now I’m working for the Leafs.” 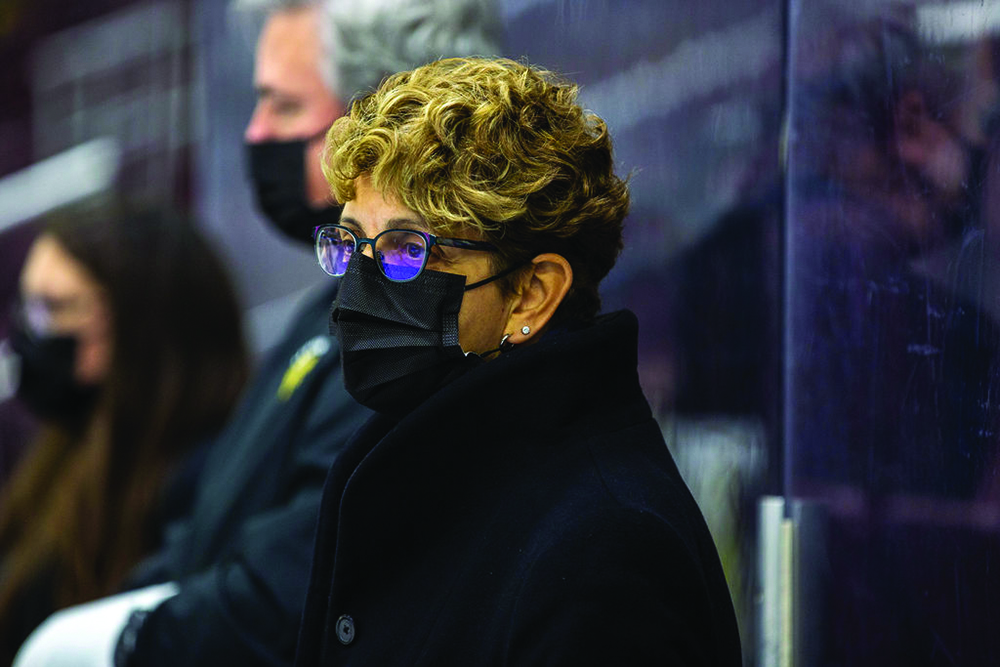 There’s much laughter. Her heart is with her team, however. “My heart is with the Maple Leaf and our job is to develop our young prospect to make sure these guys from the Growlers are able to one day be nearly perfect.”

People look up to her, we say. Any last words of wisdom? “Make sure you do what you love and no matter what, you have to believe in yourself. I can tell you for me, if you were to tell me years ago that this was going to happen in my life, I wouldn’t believe you.”

When she started playing hockey, women’s hockey was “not popular.”

“People asked, ‘why do you play hockey for a sport?’ And now it’s normal so you never know what the future will have waiting for you.”

Chase those dreams, she added.

“Kids, if you have a dream, no matter what people tell you, keep pushing. As long as you do what you love, you’re going to find a way.”