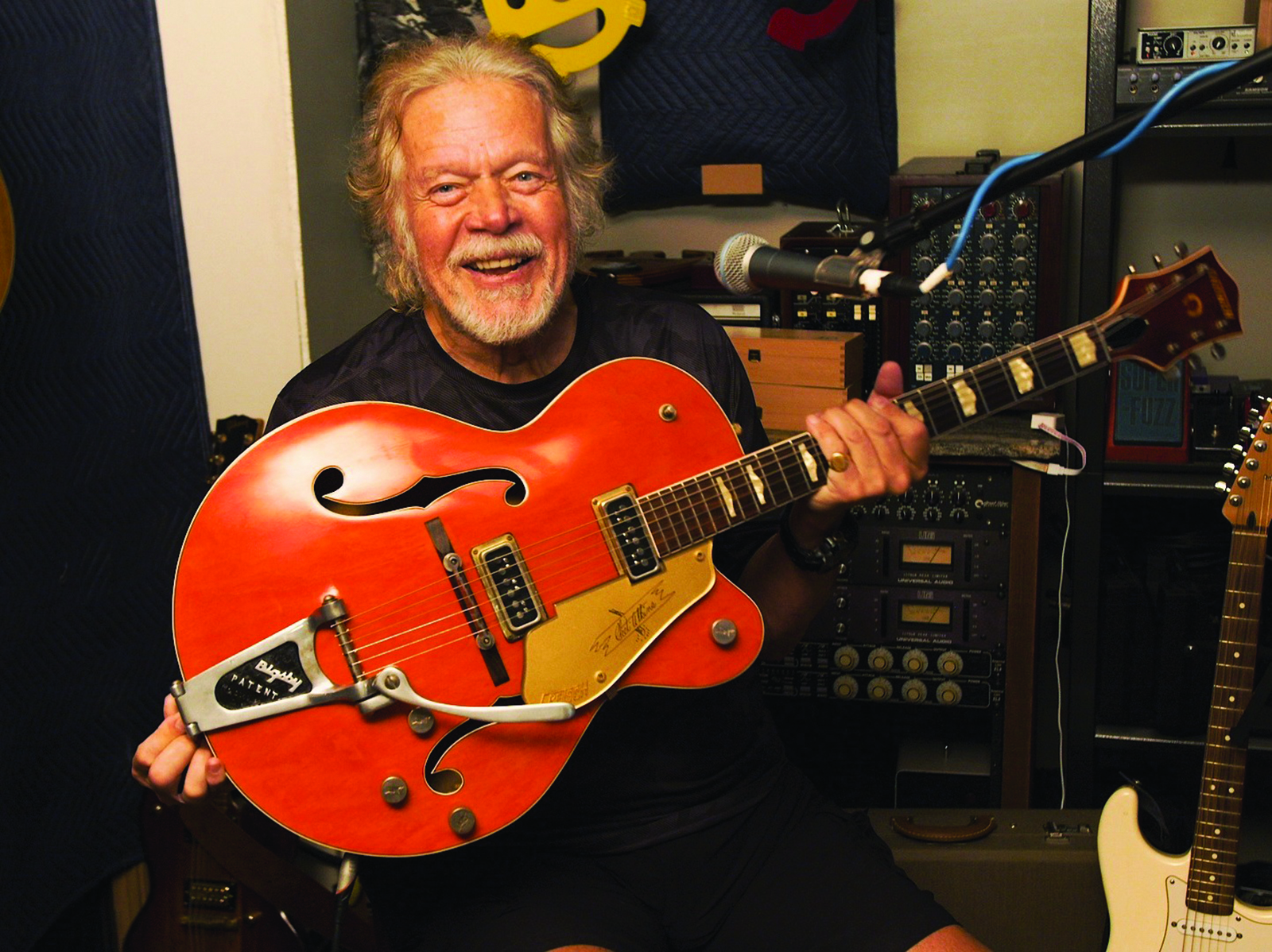 Legendary guitarist and instrumental musician in Canada’s rock culture, Randy Bachman is animated in recounting the story of how he was reunited with his long-lost Gretsch guitar after 45 years.

“A guy emailed us from one of our YouTube (live streams) and said ‘I found your lost Gretsch.’ I’d been searching for it for 45 years.”

The icon behind The Guess Who and Bachman-Turner Overdrive first bought his 1957 Gretsch 6120 Chet Atkins, in a gorgeous orange, when he was a 19-year-old upstart in Winnipeg, Manitoba. It would be stolen from a locked hotel room during a BTO performance in Toronto in 1977.

Decades later, and a fan out of B.C., William Long, used facial recognition technology to track down the exact Gretsch, tracing it all the way to Japan, where it was now in possession of renowned guitarist Takeshi.

With the help of his daughter-in-law Bachman would contact Takeshi, and over a zoom call would see his treasured instrument for the first time in four and a half decades.

“The guy brings my guitar on the zoom and I can’t breathe. I haven’t seen this guitar for four plus decades. He shows me the guitar and I say ‘that’s my guitar!” He says ‘I’m an honourable guy, I’ll give it back to you’. I said, ‘Well, I’ll give you a brand new Gretsch’, and he says ‘I don’t want a brand new Gretsch.’ ‘Well what do you want?’ ‘I want the same guitar. Can you find its sister?’

Easier said than done, but when you’re Randy Bachman, corners of the musical community are more easily reached.

Through a vintage guitar dealer in Ohio, Bachman would procure a 1957 Gretsch with only two digits off from the serial number of his original.

Takeshi, overjoyed, agreed to the trade, but with one caveat. Bachman would have to travel to Japan to collect.

The swap would take place on Canada Day in the Canadian Embassy at Tokyo’s Oscar Peterson Theatre.

“They won’t let me see him until the day. And I say why not? They said ‘this must be like a wedding. The bride does not see the groom until she walks down the aisle with her father and he goes, Oh, man, is she rockin’ beautiful!’

“So they wanted that first reaction, so I don’t get to see this guy or my guitar. So on Canada Day (Takeshi) goes up and plays a couple of songs,” Bachman recalls, emotionally. “Then he plays Takin’ Care of Business a little bit and he stops. I walk out, meet him on stage. I look at him, he’s got my guitar. I’ve got the twin sister guitar. I get my guitar back. I can’t move, I can’t breathe. I’ve got it. It’s beautiful. He gets the twin sister. We both finished playing Takin’ Care of Business. We’re both in tears. We’re both pretty verklempt. This is like a really incredible moment.”

The entire situation – from the loss, to the long-awaited reclamation – has the noted storyteller nearly lost for words.

“I tried to find the guitar for 40 years and couldn’t. And then the guitar found me,” he shares with a smile.

The incredible story will be the subject of an independent documentary, with Randy and his son, fellow rock-star success Tal Bachman, set to write songs for the proposed film, Lost and Found, with the famed guitar-god joking that his son contends that his father “lost his magic” when his guitar was stolen in 1977.

“Tal contends that when that guitar was stolen in ‘77, they stole my magic. With that guitar, I learned to play guitar. I learned my vocabulary, so to speak…

“And then every song I wrote and recorded; These Eyes, Laughing, is all on this guitar. So when it was stolen my son said to me, ‘You haven’t had a number one hit since American Woman and You Ain’t Seen Nothing Yet. Your magic is gone, but when it gets back!’”

Overcoming COVID-19, whooping cough and double pneumonia in recent years, Bachman, at age 78, is as active now as he was in his heyday between reunion-esque tours alongside Burton Cummings, continued successes in radio (Vinyl Tap anyone?) and perhaps most notably, his father-son tandem Bachman & Bachman.

“We wrote basically a retrospective album as what has happened to me as the father, what’s happened to my son who’s followed kind of in my footsteps in and out of bands and up and down and good manager, bad manager, label signing, label dropping, all that stuff. What we went through with our family, with our domestic divorces, because all rock and roll leads to divorce.

“You’re never with your wife or your family all the time. Unfortunately, that’s the big downside of it. And you look at these women you loved and they loved you, but you stopped the love because of the gigantic distance between you physically and in mileage, if you know what I mean, like not being there. And so we wrote what you call an Americana album with very touching lyrics.”

Pillars of our rock n roll history like Bachman continue to reap the rewards of a lifetime of entertaining adoring fans. Catching up with The Herald before his island return at the Churchill Park Music Festival (which he rocked!!!), the architect of American Woman and Let it Ride explained that, in the pandemic era, the world seems primed for a rock renaissance.

For all things Randy Bachman visit randybachman.com. For part one of our interview visit our website at nfldherald.com