Ray Guy: Portrait of a Rebel 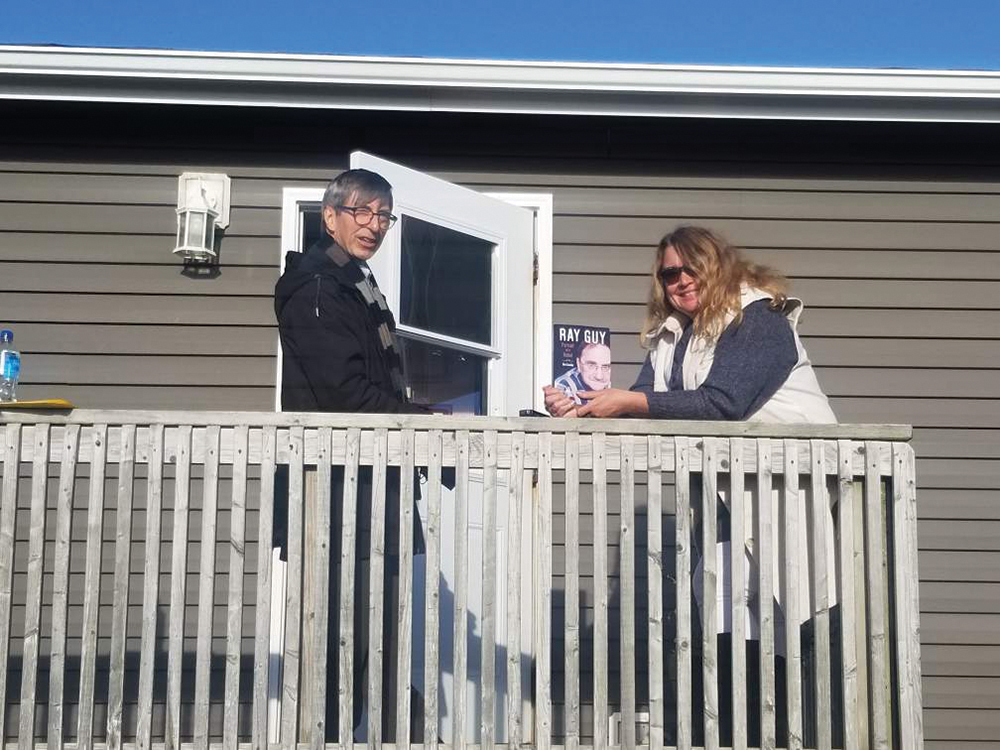 There was and will only ever be one Ray Guy. In his book, Ray Guy: Portrait of a Rebel, writer and friend Ron Crocker shares why that’s so

In Arnold’s cove, the town where Ray Guy was born and raised,  friends, family and fans of the late writer and satirist gather in his memory to celebrate Ray Guy: Portrait of a Rebel, a new book written by Ron Crocker.

Crocker, who worked with Guy at The Telegram in the late 60s and early 70s, has long lectured on Guy and used, in part, much of those personalized and sought-after speaking notes to pen Portrait of a Rebel.

With chapter titles like Colouring Outside the Lines, Lions’ Den and Friends of my Enemy, anyone either bit acquainted with who Ray Guy was – a thorn in the side of one of Newfoundland and Labrador’s most colourful former premiers, Joey Smallwood for one thing – would be chomping at the proverbial bit to get their hands on a copy.

Guy’s sister, Iris Brett, is at the gathering and she generously shared a comical yarn that involved her brother releasing (and darn near sending to the great bird paradise in the sky) a chatty – and very much treasured by their boarding  house mistress – budgie bird.

Crocker, when asked why  now is the right time to release a book on his late friend, shared that, if anything, it’s quite late coming.

“The better time would have been a couple of years after (Guy) passed away in 2013, but I didn’t get started on it until about 2015 or so, and it took me a long time to get it in order,” he admitted.

It was time well spent, it seems. Crocker spent much of the past few years talking to those who knew Guy best, as well as pouring over past writings of one of this province’s most treasured characters to ever hold a pen or pound away at a keyboard. In hindsight, now might be just the perfect time, Crocker continued as he signed copies of his book.

“Maybe it’s a pretty good time because the memory of (Guy) has not faded, but it could use some strengthening, and I think the book will help. I hope it does anyway, because part of the objective is to make (Guy) better known to younger people,” he shared

With Guy’s sister there for support, it’s clear the family were on board.

“Iris (Brett) in particular, was absolutely critical. I know it’s a cliché to say it could not have been done without her, but in this case, it’s absolutely true, and she’s very important.”

Kathie Housser, Guy’s wife, was also key, he continued. “In fact, one of the difficult things about writing this book is that it was about half done when (Housser) passed away in 2017, and it took me a long while to get going again because she was so integral to the project.”

She was ill, he explained, and as the interviews progressed, she grew tired.

“She was a major component of my ability to get it all together, and I’m sorry she didn’t get to see it finished,” he said.

When asked if he had a favourite Guy yarn to share, he paused in thought, looking out across Arnold’s Cove for –  perhaps – inspiration.

“I wish I’d had a better answer to that question, but the answer is; I’ve got literally hundreds. But I’ll give you one that’s not in the book,” he said.

It was around 1970, he continued, and the provincial Conservative Party were electing Frank Morris as their leader. “There was a convention held in a church hall on Craig Miller Avenue. I think the church was called St. Mary’s and the speeches were all in the early evening.”

He and Guy were living together at the time, he continued, and they arrived late. “For some reason, when we arrived, there was absolutely no parking anywhere except in front of a no parking sign, which was very large. (Guy) pulled in and parked in front of the no parking sign, and there was a constabulary guy on the other side of the street shouting, ‘You can’t park there, you can’t park there. That’s no parking.’ (Guy) shouted back, ‘Would you mind putting the ticket on it for me?’” We laugh.

What does Crocker think the key was to Guy’s success?  “I’m pretty confident in saying that Newfoundland has not produced a better writer than Ray Guy in all genres. It’s produced, perhaps, people in more narrow genres like novelists and so on. Or poets. But in terms of being able to write in many, many different categories, many different genres, many different voices, many different ways, I don’t think (Guy) has an equal. And I also think that no other writer has had such an impact on Newfoundland politics and society as (Guy) did in the 60s and 70s. And even beyond,” he said.

Bob Wakeham, a coworker and friend of Guy’s, was in Arnold’s Cove to honour his late friend and to support the book’s release. A fine writer in his own right, Wakeham generously shared his thoughts on what made Guy the writer – and the person –  he was.

‘Only one Ray Guy’

“There was only one Ray Guy and there never will be another Ray Guy,” Wakeham began. “He was a good friend and he was my journalistic hero. One thing I remember about him when I first met him in ‘72 was that I was just a raw rookie and he was already a legend. He was a journalistic superstar. What I remember most is that he treated me as an equal. He was taking down government and I was covering roaming dogs in Torbay. And it didn’t make any difference to him. We were two journalists.”

Later, when Wakeham became Executive Producer of CBC’s Here and Now, he asked Guy to do some television commentaries for the station. “They turned out to be one of the most popular segments that we ever had on the show, at least during my tenure there.”

Wakeham proudly shared that he “never touched a word of what Guy had written,” though that doesn’t mean the two never interacted before the cameras came on. “I think the only piece of advice I ever gave him was, just before he went on air one day I went over and I said, ‘Ray, you’re going to have to wipe that mustard off that sweater.’ He was not in tune with the television world, I’ll just say that,” Wakeham laughed.

We ask Ray’s Sister her thoughts on her late brother. Brett paused.

“He was very kind and compassionate. He was inclusive. He treated everybody the same,” she shared.  While she offered the family were always proud of Guy, to them, he was simply ‘Ray’ – always comical. Always teasing.

No Support for Joey

We ask if the family, while living in Arnold’s Cove during the Joey Smallwood days, felt any pressure or fall out from her brother’s satirical anti-Joey writings. “Yeah, but they were able to handle it, so they were good. We were raised in a very political family. Did we support Joey? No my dear, we did not. Back then, my parents weren’t fond of being part of Canada, so (Guy) came by that honestly, I guess you could say.”

As Crocker prepared to read an excerpt from his book to those gathered, it had to be asked; do you miss Guy?

“I think, during the research and writing of the book, I felt (Guy) was around and it was like I could have a chat with him. But of course, he wasn’t and I couldn’t,” Crocker said. Still, writing Portrait of a Rebel meant that Guy was around all the time. “He was constantly in my world and in my life for the last five years or so. In that sense, I guess our friendship carried on through that. But obviously he wasn’t there to let go with one of his patented silly giggles.”

The final words go to Guy, as taken from Crocker’s book in Guy’s own words as written in The Northeast Avalon Times in March 2013.

“Hail and Farewell. My thanks to you, and to one heck of a patient publisher. This is my last crack out of the box anywhere, at any time. No apologies and no silly excuses. I was born April 22, 1939. I began this journalizing racket in 1962. So, I have settled Mr. Hitler’s hash, defrosted the Cold War and pensioned Joey Smallwood. Come Robin. Our work here is done.”