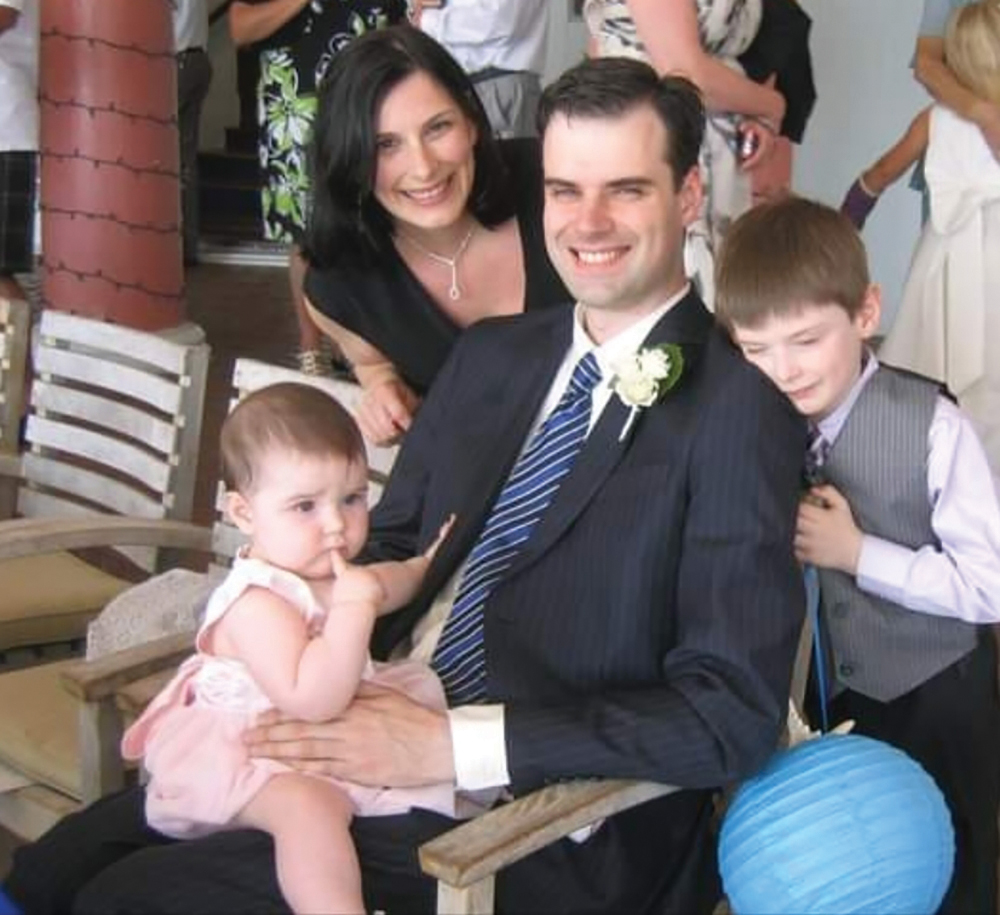 NTV’s Legislative Reporter/Assistant News Director, Michael Connors is at home behind the anchor desk and inside the newsroom, but what’s the untold story once this esteemed journalist takes off the jacket and tie and calls it a day

If you think Michael Connors and his family talk politics around the dinner table from time-to-time, then you’d be bang-on, he admitted unapologetically.

“2021 was a busy year politically, so politics came up a time or two in the evening hours,” he shared.

Wife Amanda Labonté, a well-known author, (Call of the Sea, Return to the Sea and Supernatural Causes) studied political science in university. Labonté added that politics just might be a family passion that comes naturally.

“Our son and daughter (Andrew who’s 16 and Dianna, 11) have a natural calling, you might say, when it comes to politics, though it certainly isn’t the only topic around the table or in the home,” she offered.

Labonté’s Call of the Sea series, a trilogy set in Newfoundland that’s aimed at young adults, is something she’s proud of. Husband Connors helps “flesh out” the stories from time-to-time and helps with early editing when called upon, she added. Connors, who has been with NTV over 19 years, met his love when both attended university.

Both have busy careers that see them working outside the home. Now, with the kids at home attending school, we ask how they balance their busy schedules.

“We’re lucky our kids are at an age where they’re pretty proactive about getting their online schooling done. Andrew, at 16, can get himself organized, and Dianna is motivated and organized. I think for parents with younger children, it’s definitely more juggling for them, so we are lucky in that way,” Labonté shared.

Connors says he’s “rolled with the punches” at work, the same as anyone.

“Three times now with the various lockdowns we’ve taken turns working from home. Jodi (Cooke), Beth (Penney) and Ben (Cleary) and the team, we go where we need to go to get the job done and be safe.”

Staying home isn’t an option when you’re the backup anchor or hosting Newsday or taping Issues and Answers, he added. “I’ve always had to remain in studio in some capacity. There were a couple of phases where they had us in a separate building, but because of the backup hosting role that I have, I’ve had to stay at the studio.”

It hasn’t always been easy, he admitted. In fact, he says, it’s been “a huge adjustment.”

“Switching everything to virtual and dealing with the COVID briefings obviously affects everything that’s going on with what the government of the day does. We’ve had these phases where we’re in lockdown and then another phase where things loosen up and life sort of goes back to normal and we go back to dealing with other issues.”

“Other issues” included both a provincial and a federal election.  “The provincial election was definitely the biggest challenge through it all, though. One day we were preparing for our election night show and for voters going to the polls and all that and then all of a sudden this new variant hit and suddenly we were in lockdown and the election got delayed for six weeks. And that was that. That was something I don’t think we’ve ever seen the like of before and hopefully never will again.”

With close to 20 years in the rear view when it comes to covering politics, he’s met many politicians. From the late John Efford and John Crosbie to Danny Williams and Andrew Furey, we ask about the  relationships that he’s built, and the trust he’s maintained, over the decades.

“I covered (Efford) somewhat. I kind of came in right at the tail end of his political career because he retired from politics in early 2006, and I actually didn’t start covering the Legislature until 2005, so I wasn’t in that primary political role when he was at the height of his political career. But I definitely encountered him many times.”

One of the first encounters was when Connors worked for The Telegram.

“It was a Sunday afternoon. I was on the weekend shift. I wasn’t a political reporter, but there was some issue going on in the fishery and he was in his office at the fisheries building on a Sunday afternoon, and all the media were down there sort of staked out outside waiting for him to come out.”

The fact Efford was at his office on a Sunday afternoon was “testament to how devoted he was to his job,” Connors shared.

“I didn’t quite get to know him as well as maybe some of the other politicians I’ve covered in more recent years, but there’s no question he was a unique personality on the political stage, someone who really almost comes from a whole other era of politicians that’s sort of disappearing. The John Crosbie-type that you don’t often encounter anymore.”

Connors has covered his share of political scandals over the years. Where does his approach to handling the more delicate side of politics come from, we ask. He paused.

“I don’t know. I guess I was just raised to always treat everyone with respect and to be honest and to be upfront. And that’s just the way I try to approach everything. And I find you sort of get back what you give, maybe. And that’s just who I am. And that’s the way I always try to deal with everyone that I encounter, whether it’s a politician, or anyone. It doesn’t matter who it is.”

We ask if any stories stand out for him. He paused again, thinking.

“The Bill 29 Filibuster was certainly an interesting exercise in covering legislative proceedings. Muskrat Falls, obviously, was just such a massive project that’s been going on for more than a decade now. That’s obviously been a very big story.”

There’s been plenty of floor crossings too, he added, and “there’s never a dull moment when you’re covering that.”

“I guess for me, it’s always just kind of having that front row seat to history as it’s happening. That’s always sort of been the appeal of it for me,” Connors said.

Labonté said the family “is proud of the dedication” her husband brings to the job. “I studied political science in university as well, so Michael and I talk politics as that’s a shared interest. The kids grew up always hearing it. I think Andrew knew who the premier of the province was before he knew his colours.”

We ask if there’s anything about her husband that no one else knows that she’d like to share with Herald readers. She laughed. “He can juggle.”

Connors, she continues, also is a “bit of a geek” in that he’s a fan of Harry Potter and Star Wars. Another behind-the-scene fact? He drinks tea, never coffee!

What about family nights? Any favourite activities? “Sometimes board game nights can get a little competitive. So our games aren’t always a fun, relaxing time,” Labonté shared with a laugh.

When daddy deals with premiers for a living, how does the family balance home and work?

“Michael is really good at giving me space to write, but also being somebody I can bounce ideas off of. He’ll even read things for me and I think that having this sort of relationship where we’re just really invested in what each other is doing and are there to help is really good, and I think it shows our kids that we are there for one another, and that no matter what we do, it’s important.”

Labonté credits their children for “staying grounded” but she also knows the work that she and her husband have put in. “I think Michael and I show the kids that we can be busy parents but you can still be invested in what we want to do. Kind of following your own goals, type thing, and follow your own passion while still being a cheerleader for the other person.”

We ask about life in the newsroom at NTV, and about the senior role Connors has taken on.

“As I’ve gotten older – and that’s a little bit scary to think about sometimes because I’m just like everyone else. I don’t think I have any particular insight into life or the world that anyone else doesn’t have – but others do come to me for guidance sometimes. It sort of surprises me when people come to me, but I’m sort of evolving into that more senior role as I get older and I’m always willing to help anyone that I can and do whatever I can to help.”

The dynamics in the newsroom is one of extended family, he adds. It doesn’t matter if it’s Glen Carter, Eddie Sheerr, Toni-Marie Wiseman, Mark Dwyer or Ben Cleary – everyone always treats everyone else with respect.

“We’ve always had a bit of that family feel. When I first started there in 2003, I was the youngest reporter in the newsroom. Glen Carter is the quintessential news anchor. The experience that he brought to us from working at other TV stations across the country has been invaluable. Toni is a great friend. Our daughters are the same age, so we share that experience of going through adventures in parenting at the same time. Mark is a great boss to work for. I’ve been very lucky to have all great news directors, ones that give me a lot of freedom in terms of going about how I do my job and in terms of covering the political beat.”

The couple share that they know they’ve been blessed both professionally and personally, and it’s a point they’d like to make sure gets shared.

“I feel like, even though it’s been a difficult time, we’ve been lucky to still be able to do the things that we really enjoy doing. I got lucky. I’m a writer. The arts community’s been struck hard by COVID and I think performing artists and musicians have had it much harder than others,” Labonté shared.

While there’s good days and bad days, she’s learned to take it all in stride and to be as grateful as possible.

“In general, we’ve been lucky. Michael’s been able to do his job throughout this time and he’s been even more essential than ever before and we’ve remained committed to each other and to the family.”

Focusing on family is always number one, Connors added.

“Family time is always big. We always do Sunday dinner at my parents with the kids. That’s always important. While travel is harder now, any trips we do take are to visit friends and family. We try to keep things very family oriented. I guess that’s sort of where a lot of our focus has always been and we make an effort to stay focused on that, because it’s important to us as a family.”