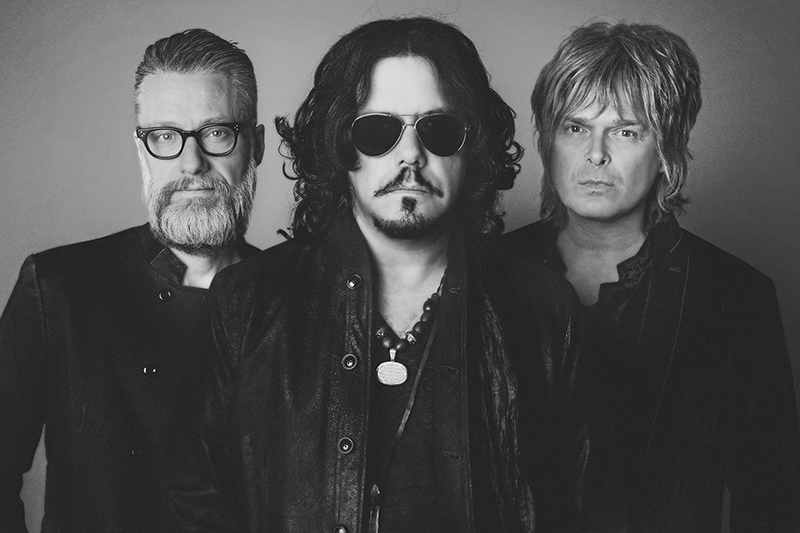 For the first time in over 20 years, Canadian rock legends The Tea Party return to Newfoundland and Labrador.

The trio of Jeff Martin, Stuart Chatwood and Jeff Burrows, whose eclectic blend of rock, blues, prog and Middle Eastern influences popularized the term ‘Moroccan Roll’, make their long-awaited return to The Rock at the 2022 George Street Festival on July 29th.

Reflecting on past excursions to our rocky shores – including an opening slot for Bon Jovi in Grand Falls in the summer of ‘95 – and Burrows laughs at one particularly memorably hilarious moment during the 2001 Salmon Festival.

“The one big one I can remember is the Salmon Festival…” he shared in a stidown with The Herald. “I think Nelly Furtado was on the same bill. And it was really weird because she came up when we were playing Heaven Coming Down, and she started doing this kind of scat rap. And that’s when Jeff Martin went to go into his solo. And we’re not usually used to sharing the stage with anybody. He went into his solo, and he started backing up and doing his thing really hard. And she was looking the other way and he almost zambonied her completely. Just missed her. And I mean, we’re all six feet plus and she’s got to be five feet. And it was one of the scariest things I’ve ever seen, the poor girl (laughs).”

Jokes aside, the pandemic downtime has been arduous on the global workforce at large, and especially crippling for the touring entertainer.

The band was scheduled to return to The Rock for the Saints and Sinners tour in 2020 opposite fellow Can-rock luminaries Big Wreck, Moist and The Headstones, before the advent of COVID-19 put all travel plans on hold.

“I mean, everybody’s going to tell the same story, but you get your hopes up,” Burrows shared of the reality of the pandemic for working artists.

“Schedule a tour, canceled. Schedule a tour canceled. Canceled two Australian tours. Canceled a European tour. It’s pretty disheartening, right? I mean, you’re getting ready. You’re prepping, looking forward to seeing the guys. I literally have not seen my bandmates, because everybody lives so far away, in three years. So it’s really strange. Jeff lives in Australia, Stuart’s in B.C. … so it’s just really, really strange.”

The band did manage to keep the momentum going thanks in no small part to the release of two collections of EPs released in the pandemic era, though Burrows himself was quick to admit that creativity did not come easy to him during isolation.

‘Hard to be Creative’

“Some people flourished in it. Jeff did a solo record, which is good, so he kept touring as much as he could in Australia in the meantime. Stuart does his video game music, I do work in Windsor when I’m there and I have a contract with the college so we all kept busy. It’s just didn’t hit me that way. I could bring nothing to the table at that point,” Burrows shared refreshingly, adding that, being old school rockers, the road is where they make their bread, and have their best creative awakenings.

“We’re not in the game of TikTok. We’re a band who literally started on the road and love to be on road. And that’s where we’ve earned our living. We don’t have album sales of Nickelback or anything like that. So that’s always been our thing, that we earn a living on the road. So it was pretty tough when the breaks were not let off at all for three years, and who knows what’s going to happen even now come fall or whatever. I don’t know anymore. It’s so weird.”

Reflecting back on over three decades of content – including the impending anniversary of their breakthrough album Splendor Solis – and Burrows jokes that the surreal nature of the bands’ success and longevity is never lost on him.

“Yeah, it’s always shocking whenever I speak to anyone about how long it’s been. Like when we first started in 1990 till now, it’s a longer time between 1990 and now than 1990 and when The Beatles stormed America. That’s f****ng nuts. You know what I mean? It freaks me right the hell out,” he laughs, honestly sharing that, in those early days of the band, royalty cheques and chart-topping prowess were a far cry from the reality of gigging for gas money and drive by meals.

“When I think about it, 30 years ago we made not one dime touring that (Splendor Solis album). It was like okay, well here we are Chicoutimi. Let’s go play some acoustic guitars and bongos in the park so we can get some gas money so we can get to the next small town, Victoriaville in Quebec. You didn’t make money.”

Fast forward to the summer of 2022, and the trio’s status as flag-bearers of a particularly fertile time for Canadian rock is firmly established.

Come July 29th, at their more than long awaited Rock return, eager fans can expect the hits – classic cuts like Fire in the Head, The Bazaar, The River and Temptation. And to trust in the fact that the band will be just as eager to hit our shores as we’ll be to welcome them.

“Man, I can’t wait. I can’t believe we’re actually going to Newfoundland. It’s so great. It seems surreal to me because it’s been forever. And you know, Jeff and Stuart, they live so far away, so far away from Newfoundland. I know Stuart’s flying his wife just for that because she’s never even been, because they met after 2000. So it’s just incredible. I can’t wait.”

For more information on The Tea Party visit teaparty.com. For tickets to The Tea Party with special guests Sam Roberts Band and Women of Rock visit georgestreetlive.ca