From small towns to curling’s biggest games, the power of teamwork, family, community and hard-work is undefeated, teases the set up for the YouTube series titled Sweeps and Stones: A Canadian Curling Story.

Kubota Canada, the genius behind farm equipment, construction equipment, mowers, and UTVs, has also been behind one of this country’s finest to ever pick up a broom; NL’s own Brad Gushue.

Kubota teamed with Brad Gushue, Kerri Einarson, Mark Nichols, Brett Gallant and Geoff Walker to proudly present Sweeps and Stones: A Canadian Curling Story, a behind the scenes look at what it takes to win as Team Gushue compete for curling glory on the world stage at the Olympics in Beijing.

One of the things that quickly becomes apparent in this five part series is how much time investment it truly takes to hone any talent at an Olympic-worthy level.

Team Canada curling is not a ‘hobby’ you can dabble with on weekends or in the evening hours.

Going for gold requires time, energy and commitment, and that means everything else in life – from working to family events – are often put on the back burner as  the team members reach for the stars. Add a global pandemic to the mix and you have some wild times for Gushue and co.

“You hit the nail on the head. For us especially this time around, having the support of partners like Kubota made all the difference for us. When I look back at the success we had 16 years ago, we were in our young 20s. We didn’t have families, we didn’t have kids. We we were pretty well 100 per cent focused on the Olympics,” Gushue began.

As such, each and every resource went into that goal, he added.

“At our age, we have wives and kids and businesses and other endeavors so for us to still be competitive with all the other teams in the world, we have to take a considerable amount of time away from our workplaces and from our families.”

Without support from sponsors like Kubota, such golden opportunities might not be as easily within reach, he added.

“Having Kubota on board with us for the last four years made a significant difference to us, to be quite honest. We were able to travel essentially anywhere we wanted to compete and (the financing) allowed us access to the best trainers around, which made a huge impact on our performance. All that will hopefully allow us to perform at our ultimate level when we head over to Beijing,” he said.

With everything that’s happening in the world these days, is his head in the game, we ask. “I’m okay. I have a good perspective on everything. But to be honest, there’s anxiety. There’s nerves about catching the virus before we get there. At this point, if we do catch (COVID), the likelihood of us being able to go is very slim and you don’t want your Olympic dream being taken away by a virus.”

Priority one: avoid the virus like, well, the plague, he said with a chuckle.

“We have to do everything we can to make sure that we can get to Beijing with negative test results. Then, everything shifts to we have to perform. It’s a balance. Isolate as much as humanly possible so our only trips out of the house is to practice. We ‘bubble’ as a team and hopefully that’ll kind of blend the priorities that we need to focus on, which is getting ready.”

In Sweeps and Stones, Gushue shared how he fell in love with the game of curling at a young age. He reflected on that life-changing moment of switching from hockey to curling.

“I knew curling was the sport for me from day one. I loved watching it, but when I actually played it, I fell in love with it that much more. My first day of curling was the day after my last game of hockey.”

His love for the game was instant, he added. “I went and tried curling and I’m like, ‘You know what? This is what I’m going to do. This is where I want to spend my time as a young teenager,’ and my family were very supportive. My dad had just bought new hockey equipment, but he got on board pretty quick when he saw how passionate I was about it.”

Gushue shared he’s “passionate” about Sweeps and Stones too and the stories it tells.

‘“I’m anxious for everybody to see all the episodes as it really tells our story. It tells how the team has evolved and there’s a bit about our time here in St. John’s and the bubble we had last year and in the spring where we spent three months away from family and friends to be in the arena getting ready for those big moments on the ice. It gives a behind the scenes look at what we’ve given up and gone through, so I’m excited for everybody to see it. I think it tells the true story of who we are and what we’ve always had to do as a team to get where we are.”

Say ‘Team Gushue’ and many across Canada can recall where they were when the Canadian curlers achieved Olympic Gold in 2006. In this province, locals can even take the Team Gushue Highway, we tease, in honour of the win.

“I’m sure they are not cheering when they go over the potholes,” Gushue joked.

We ask if he’s feeling the pressure this time around. “It is quite an honour to have the amount of support that we have across the country. I think early in my career (knowing all eyes were on the team) added a lot of pressure, but I think the fact that we’ve had the success that we’ve had, that helps.” 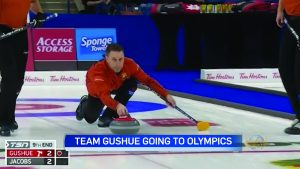 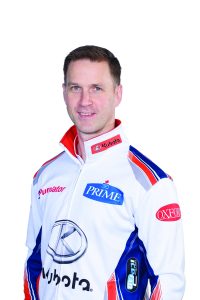 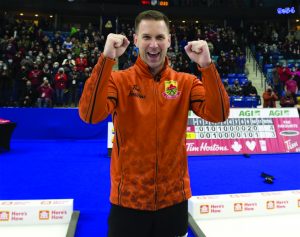 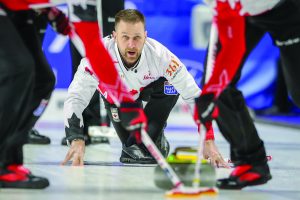 There’s no amount of success that can change who they are at this point, he added. “How we are treated within the community and whether we go to the Olympics and win or don’t win a game, I don’t know if it’s going to change too much when we come home. They can’t name another highway after us, can they? So that’s been done,” he joked.

Gushue shared that it’s all about doing their best. “A win is not going to be the life changing moment we had 16 years ago. I think accepting that takes a lot of the pressure off or takes a lot of the edge off. We want to be true to ourselves, and do our best for our families and for our supporters.”

Don’t get him wrong, he added, he very much enjoyed being one of NL’s Golden B’ys.

“16 years ago, it was very much a provincial win. Our province was just coming out of some bad times and things were looking good. And then when we won, it felt like the whole province  jumped on board with us and the celebration was for a whole bunch of reasons.”

Back to the Olympics

Today Gushue is a dad to two daughters, aged 10 and 14. They are into “typical teenage and preteen girl stuff,” Gushue shared.

“They are into dance. They play soccer and volleyball. They both curl as well, which is exciting. They’re very, very excited to see us go to the Olympics and that was a big motivator for me over the last four years. Getting back to the Olympics when they were old enough to understand the magnitude of what we were doing is pretty awesome. I’d love for them to be over there, but that’s not possible, but they’re going to be watching every game here at home and supporting us as much as possible.”

Gushue’s mom, Maureen, had battled cancer and had to cheer her son on from home during the 2006 Olympics. How is she today?

“My mom is great. 16 years ago was a scary time for our family and she was going through cancer treatments and things didn’t look as good as we had hoped at the time. She’s in a really good place now and 16 years removed from it, she’s doing very well.”

Obviously family is very important, something that becomes very obvious throughout Sweeps and Stones.

“Going back to the partnership with Kubota, that’s allowed us to balance things better. It’s allowed me more time to spend with family when I am home. Then you have the team, so that’s almost two families that I am able to be devoted to.”

In the fall and early winter, Gushue spent as much or more time with ‘the guys’ than with his actual family, he shared, and tight bonds were formed.

“You develop ties to these four guys and I think that really shows up in episode three when we talk about being in that bubble for three months and living in a house together. You know, at the end of the day, that’s who I want to play for and what I’m trying to achieve; it’s for my family on and off the ice. It’s for  home. And, it’s to give my kids that little bit of inspiration that if they put their mind to something, they can achieve it.”

Gushue’s family have certainly seen his commitment, he added.

“They’ve seen me now over the last number of years trying to achieve this goal of getting to the Olympics and they know how much hard work has to be done to get there. I think that’s a bigger lesson, in my opinion, than they are ever going to get in school or anywhere else. They’ve been able to witness it firsthand. Now, if they had any dreams – whether it’s in sport or in academics or in the business world – they know how much effort has to go in to achieve it.”

“I just encourage everybody to watch (Sweeps and Stones). I think it’s a very accurate depiction of who we are as a team and it shows what we’ve had to go through and it shows how big having the support of a company behind us is to achieving our goal.”

The folks who “pay the bills” don’t always get the credit they deserve, he added. “One of the first things I did after we won the trials was thank them because at this stage in life, without the support that Kubota has given us as our biggest sponsor,  we couldn’t have done it.”

As for the Olympics? Watch that too, he encouraged. “Watch it. Enjoy it. Cheer. That’s all we can ask for.”