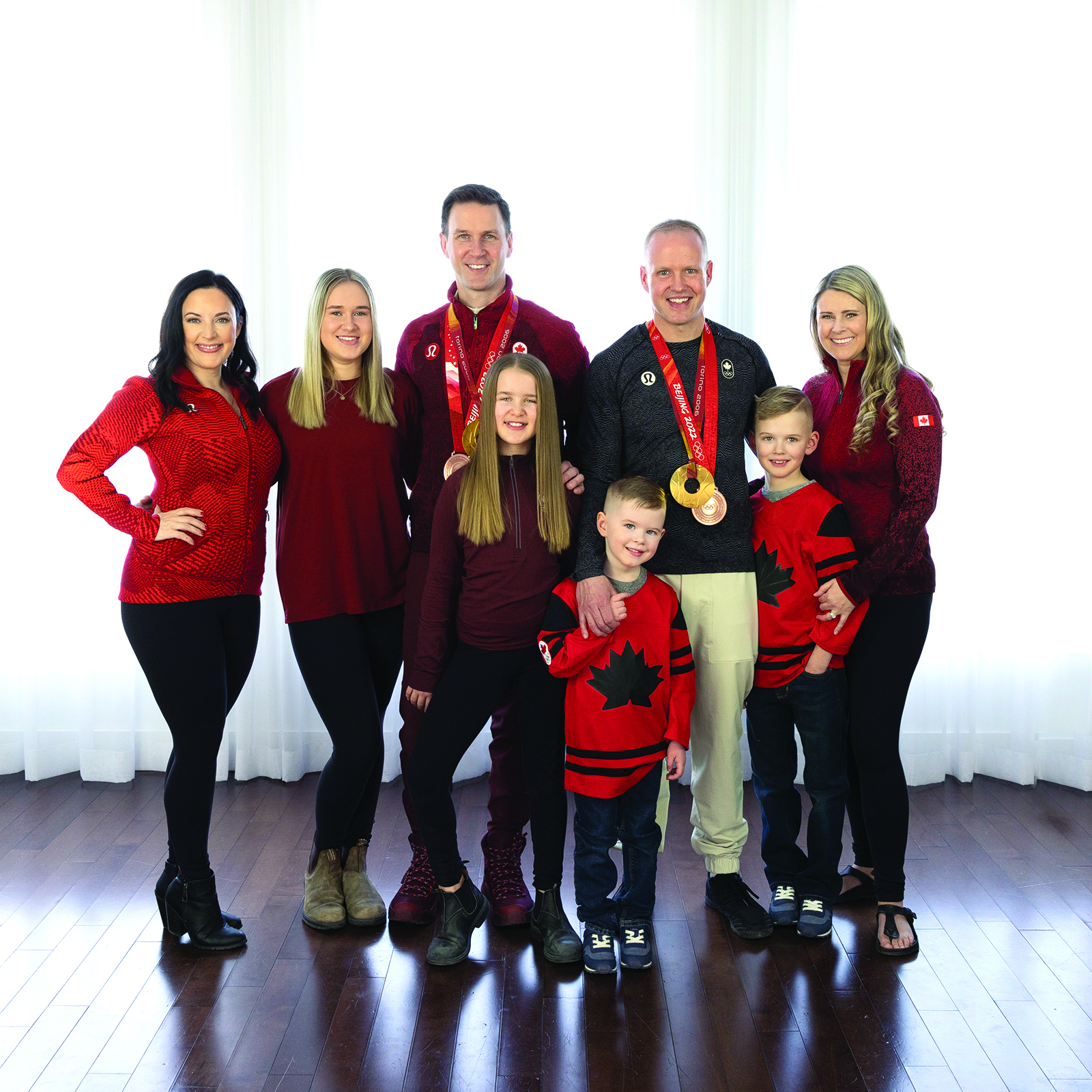 It’s the second Olympic medal for two Newfoundland and Labrador lads, Brad Gushue and Mark Nichols. In this special feature, the home team talk golden moments on the ice and with family

There’s a Newfoundland and Labrador saying that’s usually tossed around when it’s a brilliantly glorious day filled with sunshine: ‘the sun’s splittin’ the rocks,’ the saying goes. While historically we don’t get many such days living in this often windswept province, Team Canada’s curling dynamos, Team Gushue, have given us two glorious Olympic medal wins to bask in the glow of.

It might not be February sunshine, but we’ll take the glory of gold and the brilliance of bronze medals brought back home by Brad Gushue and Mark Nichols anytime. 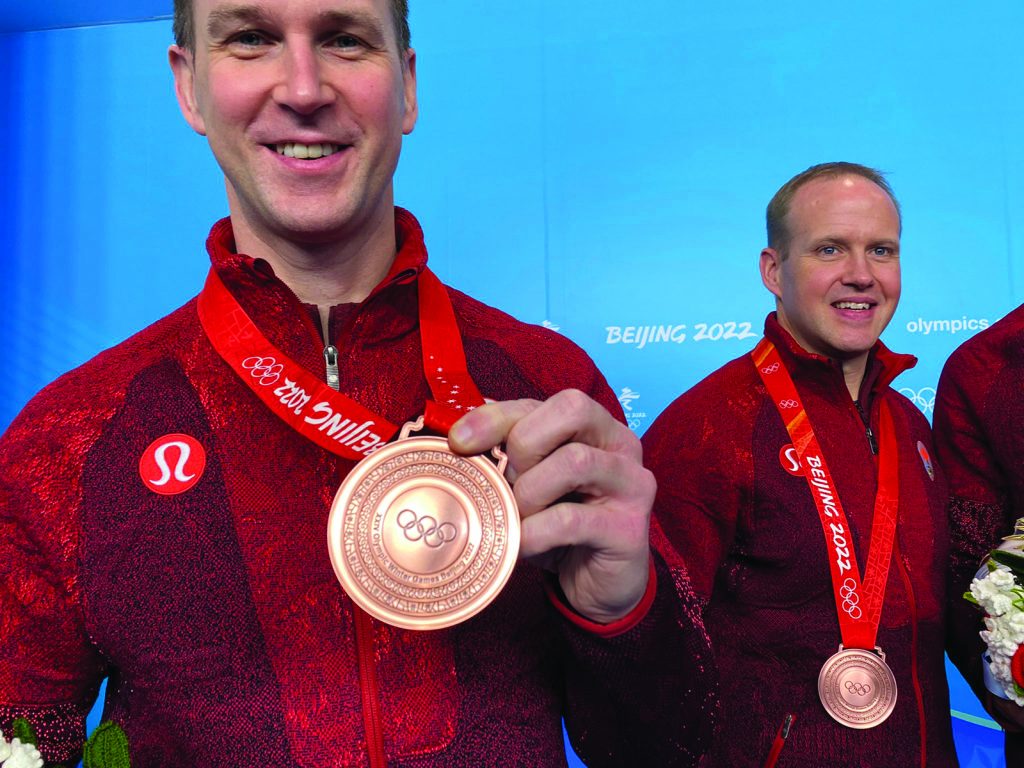 Brad and Mark – who were back on the Olympic podium after 16 years following the bronze medal win at Beijing 2022 alongside teammates Brett Gallant and Geoff Walker, as well as alternate Marc Kennedy – took some time to sit down with The Herald following their latest Olympic adventures.

The story is now the stuff of legend: Team Gushue defeated Team Shuster of the United States 8-5 in the bronze medal game. The province and country erupted. A familiar feeling.

Brad Gushue, along with then teammates Russ Howard, Mark Nichols, Jamie Korab and Mike Adam, represented Canada in curling at the 2006 Winter Olympics in Italy, where they won the gold medal by defeating Finland 10–4.

While sporting their medals for our cameras, Brad and Mark were all about family on the day we chatted.

It was a big day for Mark’s family as Emmett, four, had just finished his first day of kinderstart and the proud daddy got to take his son to school.

“It marked the return to real life right away, which is awesome. I’m just as excited that I got to be home for his first day of kinderstart and to be bringing him to school as I ever am on the ice and to be a part of that for him was awesome,” Mark opened sweetly.

Since daddy was at school dropping Beckett off, the two-time Olympic champion took some time to answer a few questions tossed his way by the school kids. Mark laughed. 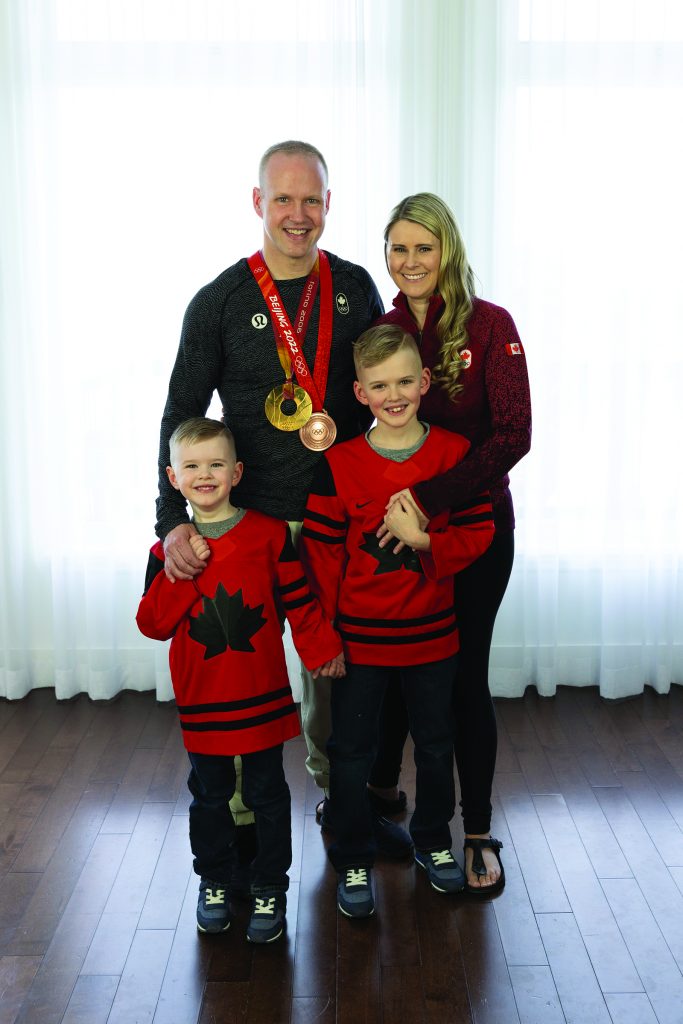 “They want to know how heavy the metal is, what other sports I got to see while I was in Beijing. Did I meet any other athletes? What was the food like? And then they ask other questions like, how many medals do you own? It’s just  amazing how much the Olympics can captivate such a young audience, and it’s super cool to see how much they watched and cheered us on. That’s the stuff that really motivates you,” he said.

Brad Gushue is dad to two daughters. He understands Mark’s sentiments.  “When we lost that semifinal game, it was actually the thought of, how were my girls going to feel, which made me so emotional after the game. I was pretty good until I came ‘round the corner and saw them on the screen with the families there watching from home. When I saw the girls, it really hit,” he said.

Sixteen years after Olympic gold, now being a father, priorities have changed, he added. “At the end of the day, they were proud of whatever we did and to come home with a bronze medal, that’s pretty exciting. The first thing they wanted to see before they even saw me was the medal. It’s exciting. They were thrilled and filled with excitement. That meant more to me than winning the bronze.”

When asked if one game stood out, Brad doesn’t hesitate: the one for the win, of course. “The bronze medal game was the toughest. I’ve said that was the toughest game that I’ve ever had to play and I still stand by that. Coming off the loss in the morning and playing for so much … it was hard because you had all the emotions, the disappointment, but also the excitement and nervousness to play for a bronze medal and trying to wrestle all that to come through and play a pretty good game. I was pretty proud of how we did.”

Brad’s wife Krista and daughters Hayley and Marissa all share their pride in  the entire team, in fact Krista says the pride in ‘the b’ys’ comes from everywhere.

“The girls, they’ve seen how much hard work has gone into getting to the Olympics. It’s unfortunate we couldn’t get there as a family, but seeing them on that podium – seeing the benefits after everything they’ve put into it – it was amazing and couldn’t get any better.

“Brad’s always talked about how you’ve got to find something you love to do, and just give it your all, and we got to see that. And knowing how much support we had from everyone just made everything that much sweeter,” Krista said. 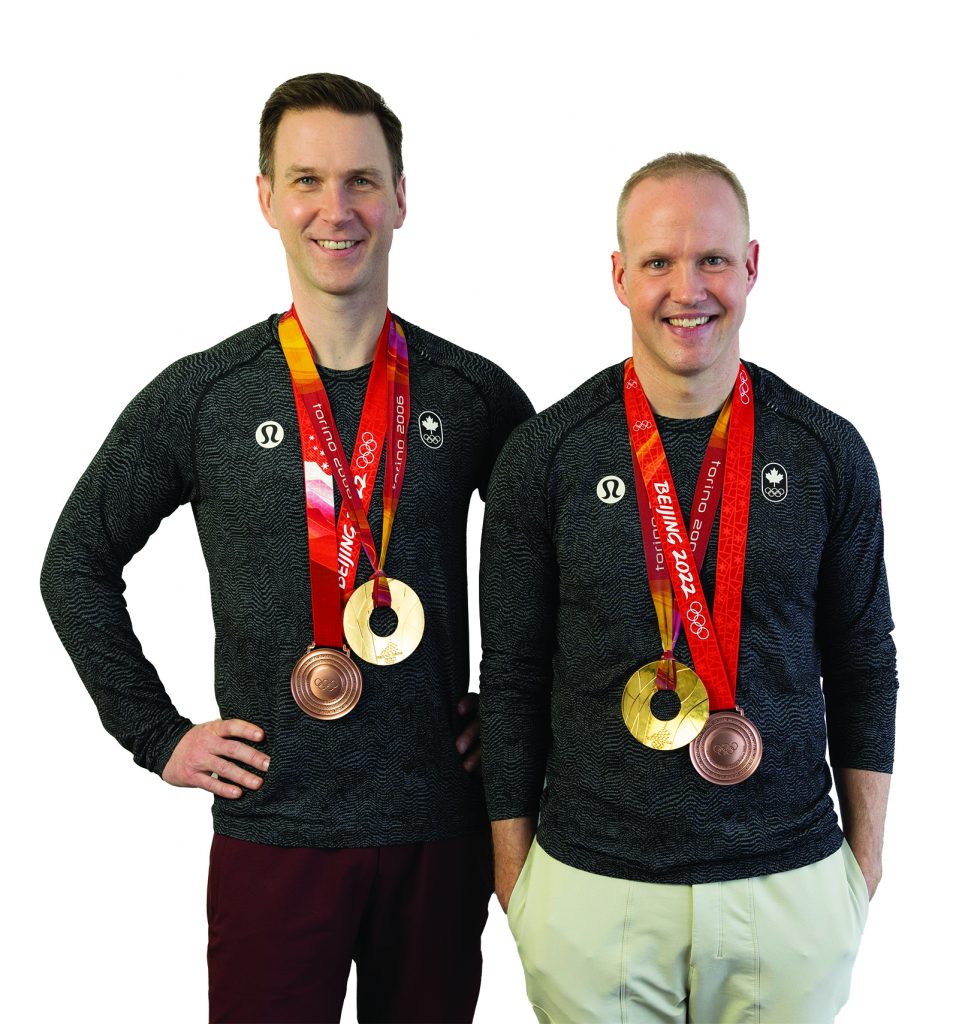 Mark’s wife Colette, who was born in Saskatchewan, agreed. “It’s nothing but love and support any time I’ve ever gone anywhere, whether it’s following a win or whether it’s following a loss. Our two boys are heavy into hockey, so I’m in hockey rinks all weekend long and I always get a pat on the shoulder saying, ‘Good luck to the boys,’ or ‘Great game last night. Keep it going.’ It’s always love and support anywhere we go as people cheer (Brad, Mark and the rest of Team Gushue) on,” she said. “It’s that kind of love and support that makes this place home,” she added.

“I am from Saskatchewan, and I moved here in 2005 and I love it. We did have that small stint where we moved away for two years, but as soon as I was pregnant with Beckett I knew we had to come back. That was always on my mind, how we needed to get back to Newfoundland so we could have a family here,” she said.

Speaking of family, both Krista and Colette share that they have become close and that “Uncle Brad” and “Uncle Mark” are both important to each other’s children.

“My boys don’t know any different. We’re family and we like it that way. My family doesn’t live here and Mark’s sister lives away now, so to have that love and support on the ice and off the ice has meant a lot to me, especially for Beckett. He really looks up to the boys (on Team Gushue) and he actually sees a lot of the hard work, a lot of the determination and the sacrifice. He knows when Dad can’t come to a hockey game it’s because the boys were working hard and that’s actually pushed him a lot harder. He skates harder and he tries harder. He’s actually seeing the big picture now and putting it all together and he knows what it all means,” she said.

We ask the families if they were nervous wrecks while cheering on at home. Krista nodded. “Absolutely. I was nervous. We had a very upsetting loss in the semifinals and curling is a mental game, you have to use your head, so we were very, very upset for them knowing how hard they worked to get there and knowing how close they got. And I know Brad. He was more worried about disappointing us than anything else and when they won, the first thing he said was ‘Were the girls happy? Were the girls proud of me?’ That’s Brad.” 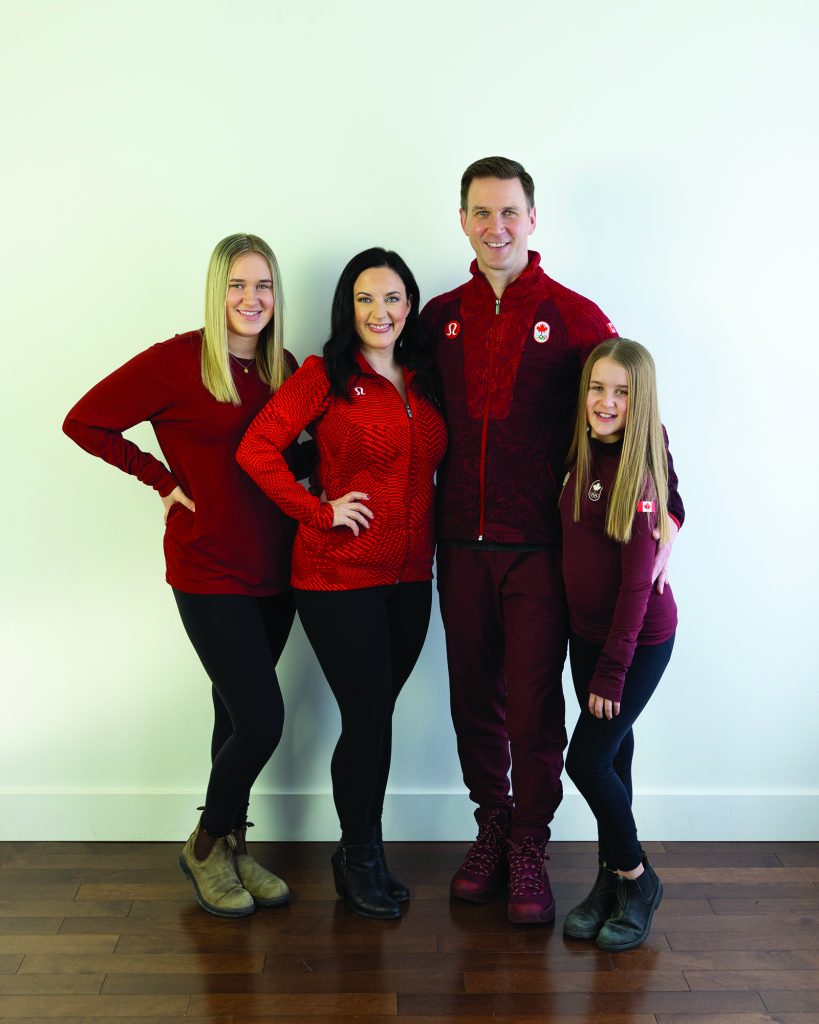 Brad smiled. What’s next? we ask.  “You know what? We’re kind of hitting a point now where we’ve played together, the four of us, for three years. I’ve been with Geoff (Walker) and Brett (Gallant) now for 11 years, and Mark and I, outside of the break we had, 20 plus years.”

But there’s been changes, he added. “Geoff recently married and moved back to Alberta, so who knows what the future is going to hold for the team, but to go to the Olympics now, come home with a medal? It’s a great moment for this team because we’ve been arguably one of the greatest teams of all time and to get an Olympic medal to go with the World Championships and the Briers and the Grand Slams is pretty cool. So I think we’re all very proud of the run that we had.”

Mark feels the same, he said, adding; “We’ve been through it all together right back to our junior days, 20 years ago. So now, to win bronze and have our families be part of that?”

“It was a special moment, and we had weird challenges while we were over there so for us to fight through and battle the way we did to come home with the bronze medal, I don’t know that it can get much more special than that. We were able to get through it all together and get the outcome that we got, and that’s worth celebrating.”

We ask Brad if he has any advice for anyone out there working towards any goal in life.  “Just do something you love,” he said simply. “Winning is not always about Olympic medals. You have to find something you want to do, and I love curling. Anybody that knows me knows how much I care about curling and how much I just enjoy going down and throwing rocks sometimes just by myself,” he said.