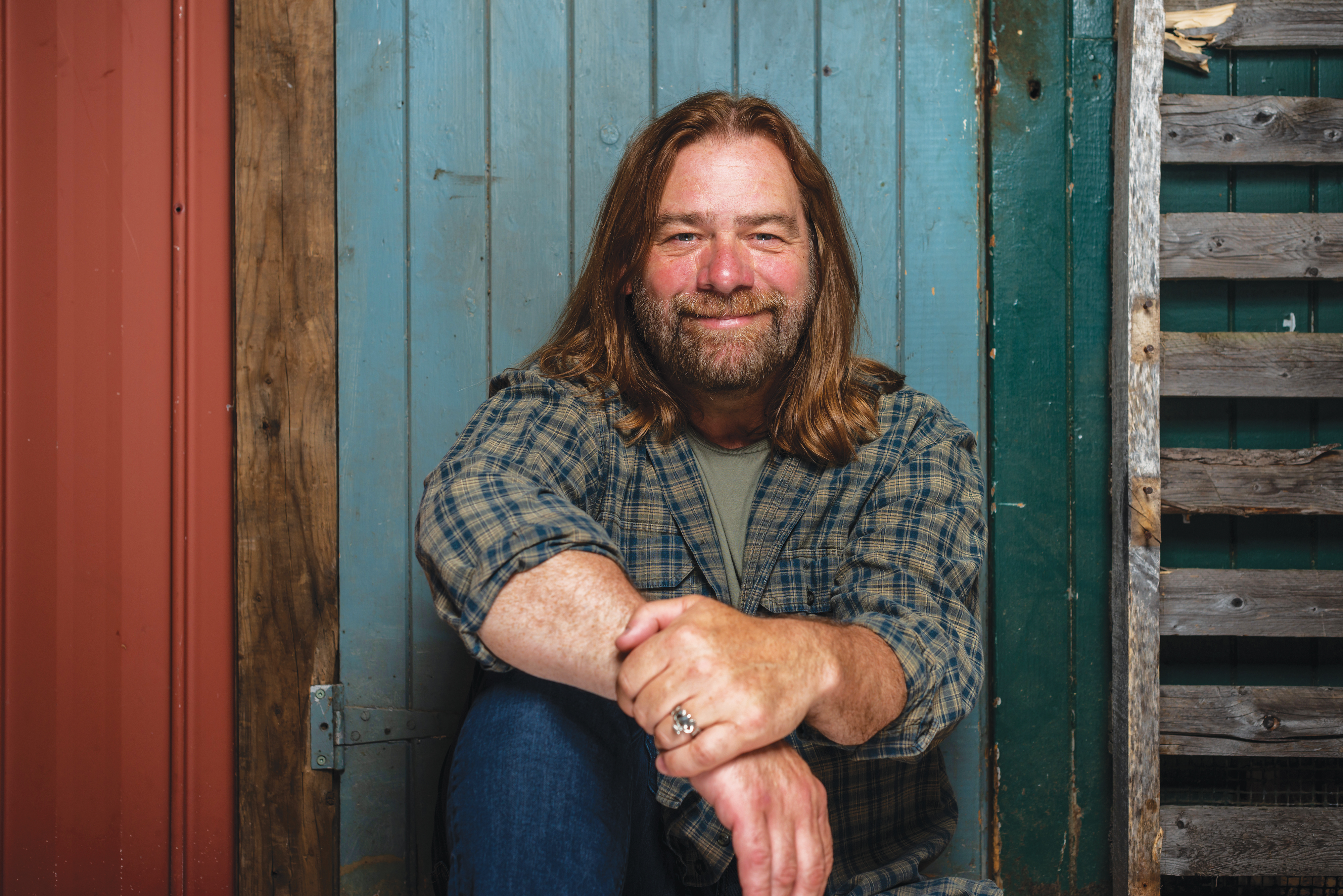 Don’t dare tell Alan Doyle he can’t, because he most certainly will! The musical Tell Tale
Harbour, based on the screenplay The Grand Seduction finds one of NL’s own not only co-writing the musical but starring in the lead role this summer in P.E.I.

The Confederation Centre of the Arts in P.E.I had some exciting news to share ahead of their 2022 Charlottetown Festival lineup announcement. Artistic Director Adam Brazier joined The Herald’s  Managing Editor via Zoom for a  yarn.

Brazier  was asked what it’s been like working with one of the play’s stars, Newfoundlander Alan Doyle, on Tell Tale Harbour.

As if called to join the Zoom call via a personalized standing ovation, Doyle pops on, in all his hair-tossin’, high energy, smiling glory. Even from a hotel room, Doyle manages to glow.

“Check this out. Don’t say we don’t take you to the nicest places,” he gushed as he ‘showed off’ his travelling-man living quarters – a room at a Comfort Inn in Riviere-du-Loup – while he gushed about fried chicken he used to be able to get back in the day in Petty Harbour.

It was, he said, a spot to have “a glorious time,” for anyone enthusiastic about fried chicken, he reminisced fondly. “But there’s a St. Hubert’s across the street here. So it’s like all is not lost, let me tell you,” the man who lays many a golden egg when it comes to anything ‘arty,’ began happily.

Is there any other way when it comes to anything Doyle turns his hand to? Musician, author, playwright, actor: he’s been there and most certainly has the T-shirt. So what’s he up to now?

The 2022 Charlottetown Festival, held in Charlottetown, P.E.I. will have the world premiere of Tell Tale Harbour, a new musical comedy set in small-town Atlantic Canada, beginning this June.

Star of the Show

While many have known Doyle was involved in the development of the show and would be writing music, the bigger news is that the well-known Great Big Sea front-man will also be starring in the show from June through to September.

How did the beloved Grand Seduction, which starred Taylor Kitsch, Brendan Gleeson and NL’s own Gordon Pinsent, become a musical? Doyle said the credit belongs to Brazier.

“He was the genesis for this whole project, if he doesn’t mind me saying. (Brazier) recognizing this story might be a good thing to present on stage in a musical theater and so he made it happen,” Doyle offered.

Brazier nodded. “It really spoke to me when I watched it. I felt (The Grand Seduction) was this perfect fodder for a musical comedy. It’s exactly the kind of material and story that you look for. It has just enough pathos and heart behind it to make you care about the people in this situation. It speaks beautifully to our Atlantic Canada region,” Brazier said.

At their core, The Grand Seduction/Tell Tale Harbour are yarns about hard times and hope in a small rural region, but there’s so much more too, he added.

“Yeah, it’s a hilarious and absurd comedy, but it’s all based on real issues that the Atlantic community has. We have doctor shortages. We have communities that shut down when they lose employment. And so it speaks true to the region. But at the same time it is predominantly fun, funny and as I would like to  say, it would make for a great night out.” Brazier said.

It has to be asked of Doyle, who is busier than a bayman with two wood stoves; why take on a project that will see him on stage from June through to September?

The answer? Just because. The quote he likes to re-use is a quote he accidentally said when asked about producing a record for the popular children’s group Splash ‘N Boots.

“We ended up winning a Juno, so it worked out great. But as I said to them when they asked me, and I said to (Brazier), and I’ve said so many times in my career; ‘I do things at least once because I don’t know how.’”

At first he was simply asked to “write a couple of songs,” for the musical.

“I said, ‘why not. And if you guys dig them and it feels like a good fit then use it. If it doesn’t work, just go find someone who knows how to do it because I don’t know how to do it.’ But one of the things that I’ve discovered more and more in the last two or three years of developing this fun project is that there were people in musical theater like (Brazier), who know the general rules and structures of musical theater, and they are always excited to find somebody and something or some song or some character that lives outside of what they already know.”

And that’s where Doyle and his fresh approach came in handy, it seems. “I could actually bring something new. I’m not schooled in musical theatre, I only come at it with all the stuff that comes with me, you know? Hopefully that’ll bring something fun and exciting,” Doyle said.

No doubt. Six months out and there’s already a buzz. Tell Tale Harbour, which kicks-off the Charlottetown Festival, is a musical which tells the story of a struggling Atlantic fishing village. The community is looking for a miracle when an opportunity arises to bring a frozen French fry facility to town. Realizing this might be their last chance to save their beloved community, the townspeople come together to secure the factory.

Developed with support from the National Arts Centre’s National Creation Fund, the hilarious musical comedy celebrates the people, the trials, and the triumphs of living in a small community in Atlantic Canada.

When Brazier began drafting the musical adaptation, he sought out a collaborator who could encapsulate Atlantic Canadian storytelling through song, which led him to Doyle who, as we now know, is starring in the lead role.

“I am so excited to be a part of this project, and to be taking my first steps into musical theatre as a creator and performer. The whole deal is both invigorating and terrifying, as all good art should be,” Doyle shared when asked about his early involvement.

“I’m stoked for people to know we are crafting a show to make people feel like they’ve experienced something truly special and give them a great night out. I hope its passionate message about the meaning of home, and the hilarious situations it portrays, will move people to laugh and cry and laugh again,” he said.

Bob Foster, Music Director of Come From Away, joined Doyle as he began to pen the tunes that shaped this worthy hits-close-to-home yarn.

Brazier shared that the excitement is real and working with not only Doyle and Foster, but alongside award-winning writer Ed Riche and director Jillian Keiley, Artistic Director of the National Arts Centre English Theatre in Ottawa, and with choreographer Linda Garneau, has been a COVID gift of sorts.

“COVID has been a real blessing in a way because it opened up so many people’s schedules to focus on this. And not just us as writers and collaborators, but also with artists that we’ve brought in to do workshops we’ve had. We’ve had the joy of being able to have incredible talent supporting us and helping us develop this piece,” he shared.

And as for Doyle?  “He has this natural ability, not only as a songwriter, but as a lyricist, to find ways to keep the stories active and going. He is very natural at it, his songs have a narrative and they take you places and that is what we look for in musical theatre as well. So it’s been a really good fit that way.”

Doyle is encouraging all to ‘come to ‘The Harbour,’ Tell Tale Harbour, that is!

“People, like if you want to come to The Harbour, you should really get it together really quick because I’ve got a feeling it’s going to be a busy, busy, busy summer in Charlottetown.”

We ask Doyle if there’s any nerves, or simply excitement. “Oh, I’m just excited to be taking a step onto the stage as a musical theater performer. It’s like I’ve lived a very lucky life in the arts. This is just another round of good fortune for me, so I’m very excited about it and I’m really looking forward to it.”

Tickets for the 2022 Charlottetown Festival are on sale and tickets can be purchased online at confederationcentre.com or via phone at 1-800-565-0278.