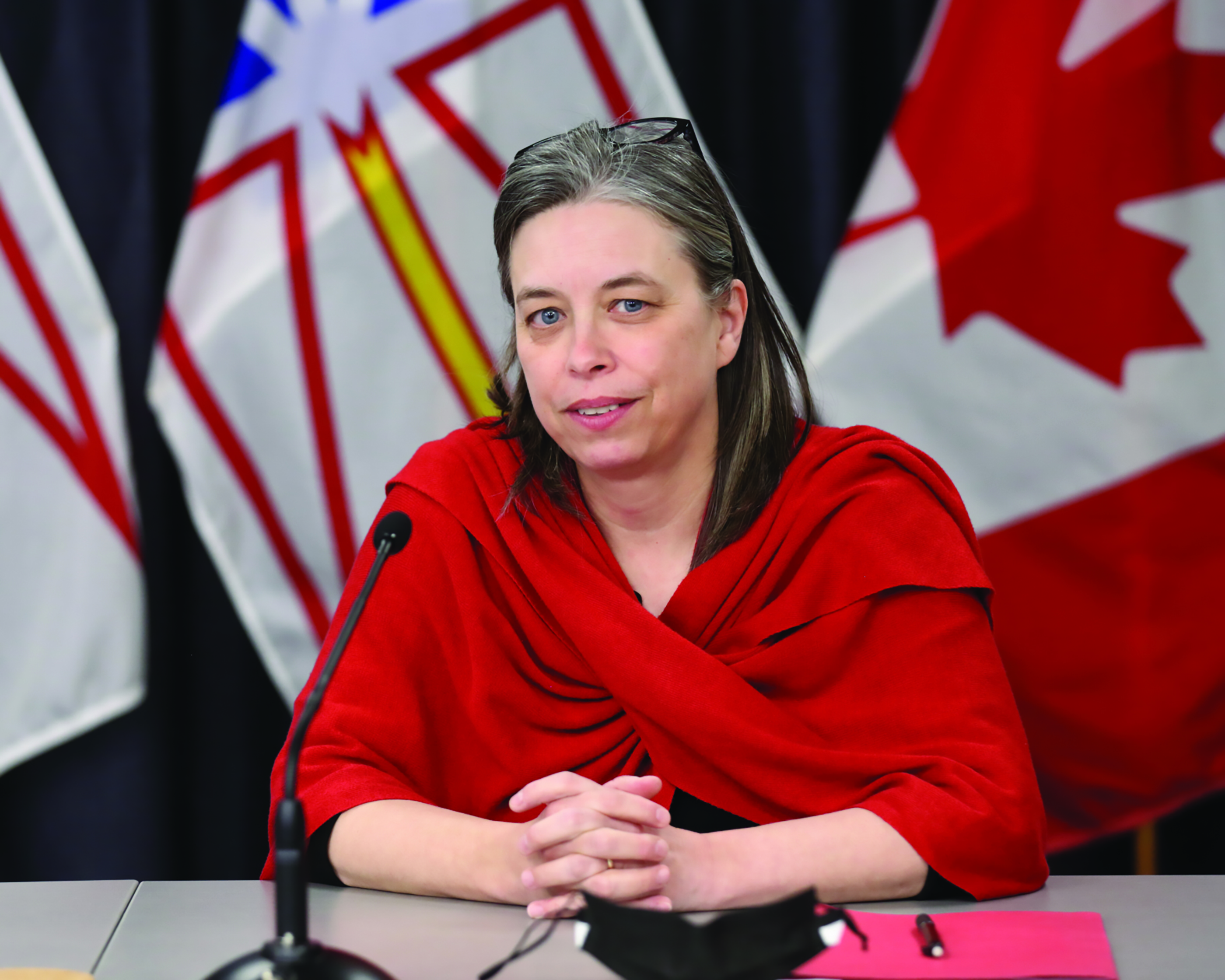 The face of NL’s quest to conquer COVID-19, Dr. Janice Fitzgerald, is not only credited with keeping us safe, but she’s also number one in hearts and minds

The fight to keep the pandemic off our shores has been the number one priority of this province’s Chief Medical Officer, Dr. Janice Fitzgerald.

Along the way, however, after 13 long months of appearing before the cameras to take a no-nonsense approach to reporter’s questions, Dr. J also eased her way into the hearts of every Newfoundlander and Labradorian.

What’s not to love about someone who has your best interest at heart and doesn’t bend to pressure? We’ve all watch Doctor Janice Fitzgerald over these long and no doubt trying months. We’ve seen her grow emotional when asked about her own family. We’ve seen her seem a tad ticked off when asked perhaps maybe one too many times about the provincial election, and we’ve heard her heavy sighs – and maybe even seen an eye roll or two – out of frustration when the message doesn’t seem to be getting through.

Even those of us who had to self-isolate and/or quarantine a time or two have and would continue to sing her praises.

Laying it on the line

We’ve all seen a composed and poised and well-scarffed Dr. Fitzgerald before the camera. Mid-November, when a small cluster of COVID cases broke out on the Burin Peninsula affecting about half a dozen seniors, there was concern. With a cluster also in the Deer Lake area, the reporter’s questions flew fast and furious. Community spread and cases amongst our most vulnerable had been what we had worried about all along. With Christmas around the corner, the good doctor laid it on the line: gatherings should be avoided. Period. These, she cautioned, are not normal times.

“This need to be a stark reminder to everyone in the province that COVID can raise its head at any time and in any place in our province,” she cautioned.

Dr. Fitzgerald has taken criticism at times too as many have pointed out that NL has had some of the most strictest health orders in the country.

She’s also earned praise for sticking to her guns as two constitutional challenges were brought against the non-resident travel ban.

Just as NL’s COVID caseload was at its lowest, Dr. Janice Fitzgerald brought in a mandatory mask order, a move that no doubt – at least at the time – was difficult to swallow. Now? Besides a scatter voice to the contrary, mandatory mask wearing when it didn’t seem urgent has become commonplace to all. When it was required, NL’ers were already adjusted to face coverings to protect one and all.

Why is it that so many have complied without complaint? Perhaps it’s a combination of things. Guaranteed, one of the reasons is to pay homage to the woman who works so hard to keep us safe as she shows her soft and tough side all at once.

Her strength and her compassion on display for all to see, Dr. Janice has become everyone’s go-to during this pandemic. She’s also become the poster woman for what a true hero is; someone who gives all for want of little reward.

Dr. F. has long been quick to pass the praise along, thanking both past premier Dwight Ball and current premier Dr. Andrew Furey, for listening to the science.

Personally, Dr. Fitzgerald prefers to navigate life behind the scenes.

When she’s not busy fighting a pandemic, she’s a wife, a mother, and a dog mom. Proud to be born in Trinity, Bonavista Bay, she has said her hometown is “famous for being the Trinity in Newfoundland that isn’t famous.”

Whatever it is about this province’s Chief Medical Officer that has inspired, united, and commanded the attention of the entire province, truth is, it probably doesn’t matter. What counts is that she has, and that’s demonstrated day-in-and-day-out by so many in many different and creative ways. From art to poetry, Doctor Janice Fitzgerald is a hero for the ages.