The Man In Black’s Greatest Hunt: Johnny Cash on The Rock 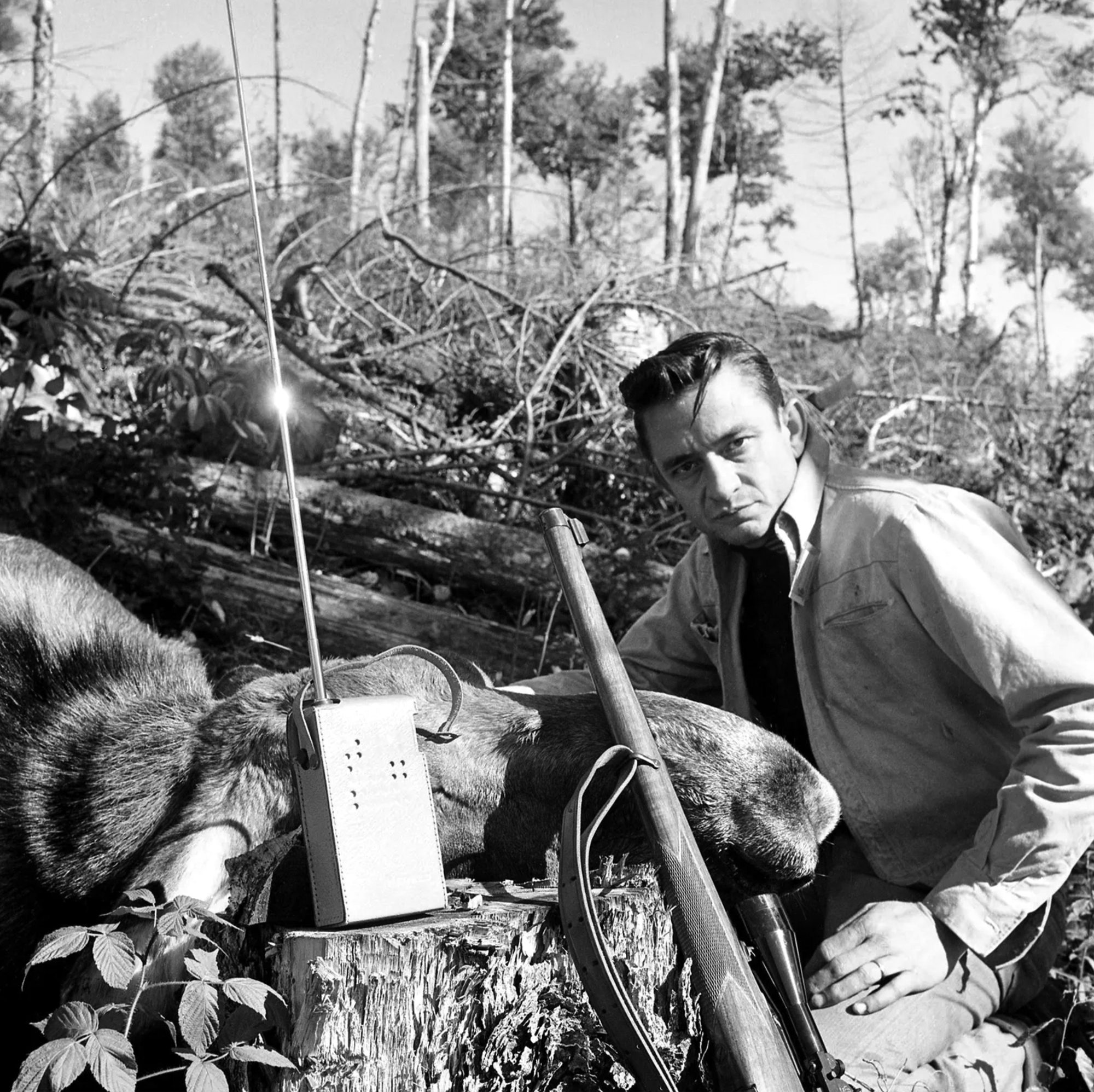 Newfoundland and Labrador’s key contribution to the life, legacy and career of The Man in Black Johnny Cash is examined on the 60th anniversary of his island excursion

The life, legacy and legend of The Man in Black Johnny Cash is one chock-full of peaks and valleys, of dramatic highs and lows that have simultaneously deified and demonized perhaps the most endearing and polarizing figure in country music history.

From Oscar winning biopic Walk the Line to hundreds of expansive editorials, tell alls and deep dives, Johnny Cash, and his enigmatic life and career are well documented. Yet, there is one part of his life and times that’s little known to the public and music historians: his, arguably, career-turning trip to Newfoundland and Labrador. 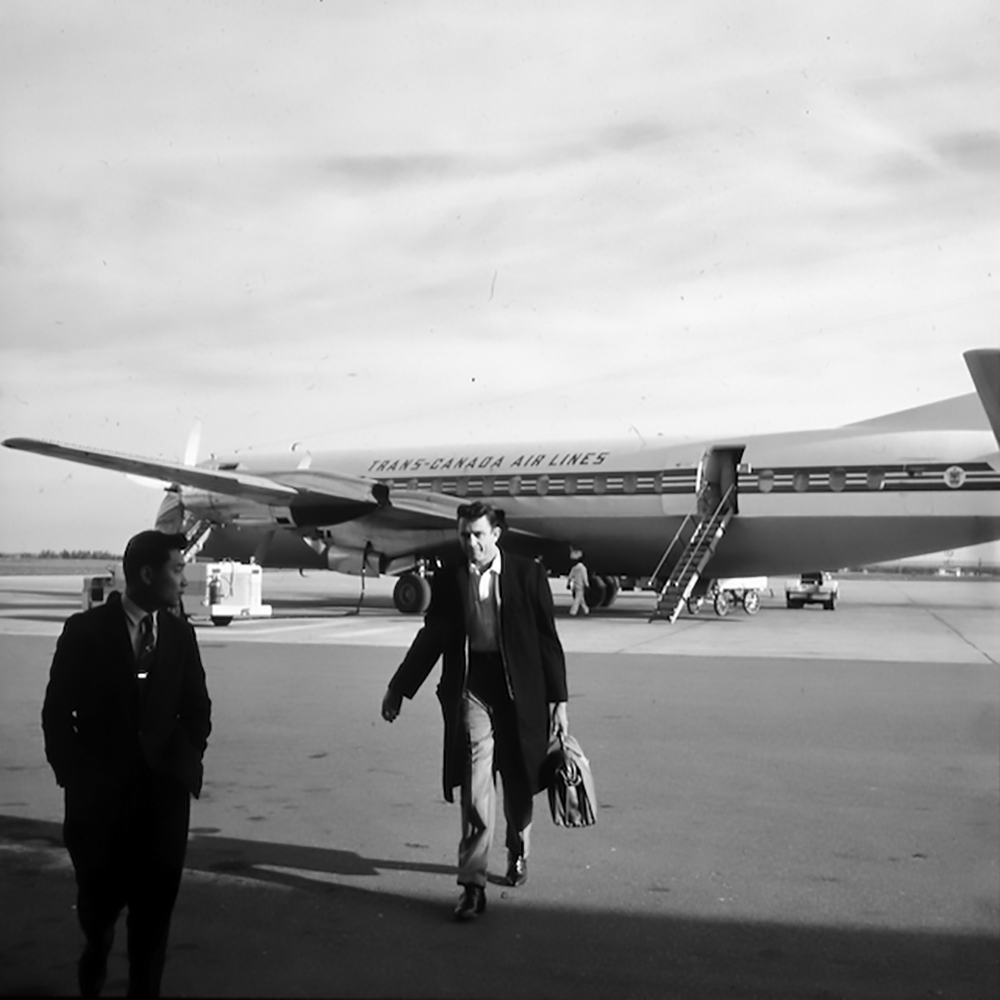 On the surface, Cash’s concert-tour of Newfoundland and Labrador and moose hunting excursion in October of 1961 are but a footnote in a prolific decade for the artist. But reality can be at times so much stranger than fiction.

“This just basically fell into my lap,” shared documentarian and filmmaker Jonathan Holiff in a sitdown with The Herald.

“I wasn’t looking to make another film about Johnny Cash. But when I looked into it, it was interesting because it’s not just of interest to Newfoundlanders. It’s of interest to music historians as well.”

Holiff, who Cash historians will have been well acquainted with in no small part due to his 2012 documentary My Father and The Man in Black, is the son of the late Saul Holiff, who managed Cash during his resurgence in the ‘60s into the ‘70s.

That relationship would evolve in earnest during a tour of Ontario in the summer of 1961.

“I take you back to this 10-day tour of Ontario in May of 1961. They ended up in the last show in North Bay, Ontario,” Jonathan explained, recounting events retold by Johnny Western, Cash’s long time friend, show emcee and featured player.

“Johnny Western explains that after that show, they were outside the dressing room in the hallway at North Bay on the payphone. Western is kind of leaning up against the wall next to the phone and Cash is on the phone and he’s calling every number he can think of in California, trying to find his then manager … Couldn’t find his manager. The manager was very fond of betting on the horses. And he finally tracked the guy down at a racetrack in California. And Johnny was so pissed that he fired the manager.

“And that’s when Johnny Western turned to Cash and said, ‘you know, Saul does such a good job for us in Canada, why not him?’ And according to Johnny Western, Cash just kind of grunted. And that was the end of it.” 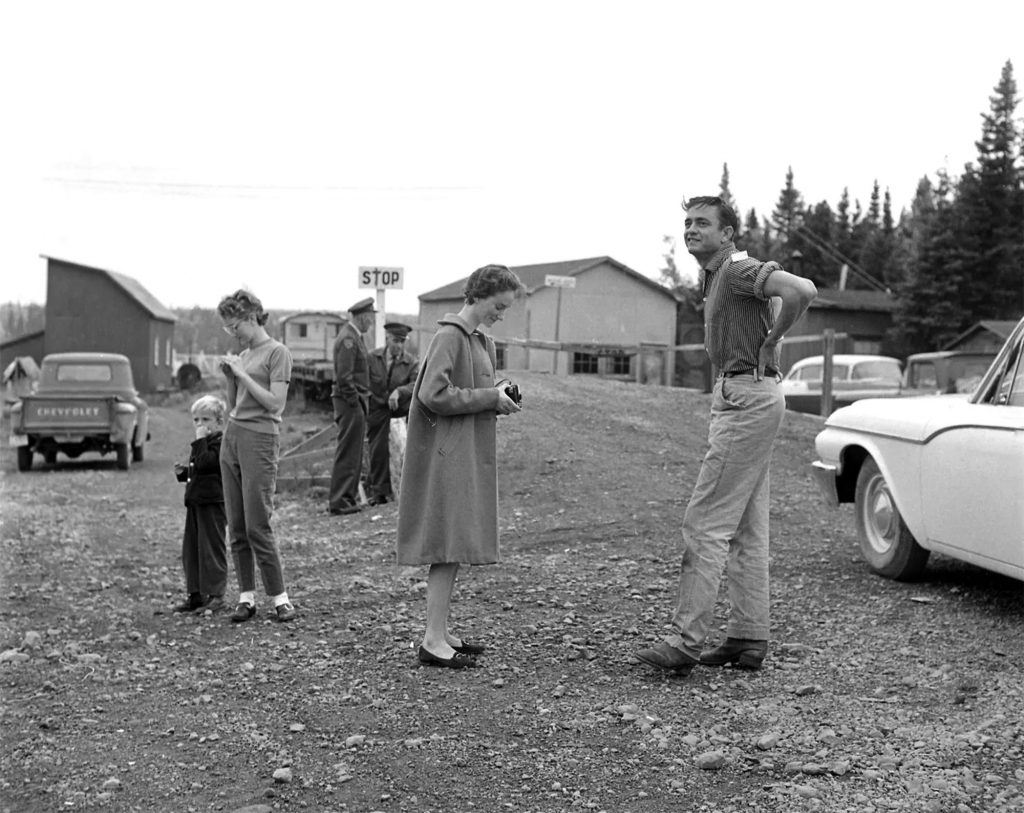 Fast-forward to Cash’s return to his office in Ventura, California, where he had recently relocated, purchasing Johnny Carson’s home in Encino, and Western again broaches Cash with the idea of partnering with Saul Holiff, who had been handling Cash’s touring in The Great White North since the late 1950s.

“(Cash) had signed with Columbia Records. But what happened was he didn’t hit anything. In fact, it was two years that he hadn’t charted in any significant way after leaving Sun Records. And he desperately wanted to turn his career around. So Johnny Western again said to Cash, ‘look, you should think about that Canadian dude,’” Jonathan recalled.

“It’s interesting to note, and take it from me because I worked in Hollywood for 20 years, so imagine Johnny Cash in Ventura. He could walk out the front door of his office building and bump into three managers on the street. You know, there was no shortage of people there who would want to manage Johnny Cash. But instead, Cash sends a telegram to my father in London, Ontario, and they start this kind of romance or bromance, if you will. And I’ve got letters back and forth between the two guys that are just amazing, where they’re calling each other nicknames and they’re kidding around and lots of brotherly love.”

Initially broached with the idea of a hunting trip by famed photographer Richard Friske – who sought to sell the story to Field & Stream Magazine – Saul took the notion one step forward.

Having produced Canadian concerts and tours for Cash since 1958, Saul was well aware of Johnny’s love of the hunt. Newfoundland and Labrador became a carrot for Saul to land his white whale. 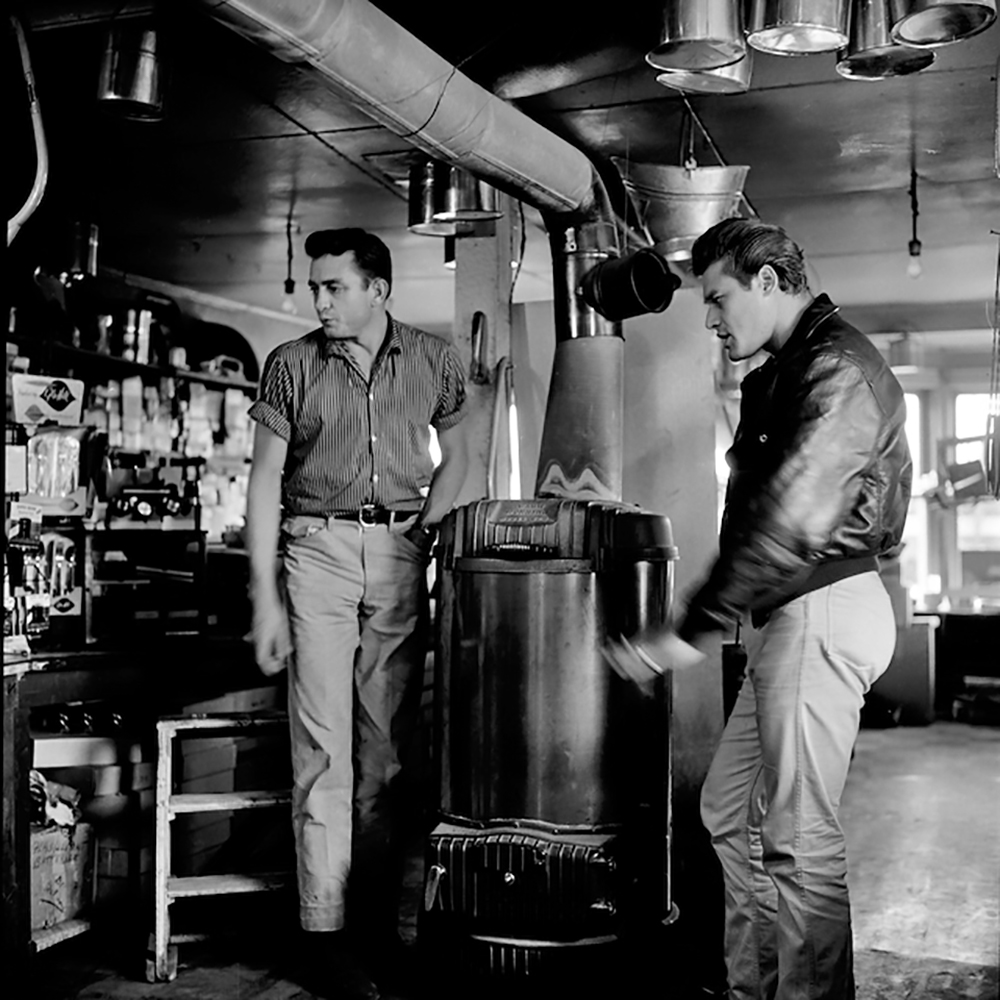 “When Johnny and Saul were on the 10 date tour of Ontario in (May) of 1961, just a couple of months before Newfoundland, Johnny mentioned to my dad that this guy (Friske) had pitched this story idea,” Jonathan recounts.

“And my father ran with it and said to Johnny, ‘have you ever hunted Moose?’ Because he wanted it to happen in Canada and he basically said to Cash ‘if I could set up some dates around a moose hunt in Newfoundland, would you like to go?’ And Cash, of course, jumped at the opportunity.

“(Western was) pushing each of them toward each other, writing my father a letter where he basically says and I quote, ‘John is wandering around in a fog. You know, he shouldn’t be on the phone and talking to buyers. Saul, put your cards on the table. I really think you need to manage Johnny Cash.’”

The pair would seal the deal with a handshake at Gander Airport, initiating a boom period for The Man in Black throughout the 1960s. But the ramifications would go far deeper than the professional.

“Cash tapped him to be his manager, as you know, at Gander Airport in 1961. But my father had one condition and the condition was that he wanted to put Johnny Cash with a “girl singer” and the two guys agreed to hire Rose Maddox,” Jonathan shared.

Maddox, to the uninformed, was a country and western star perhaps most famous for her time working with her brothers, known professionally as The Maddox Brothers. It was on that very first tour with Maddox, in Newfoundland no less, that events would be set in motion that would change Johnny Cash’s life forever. 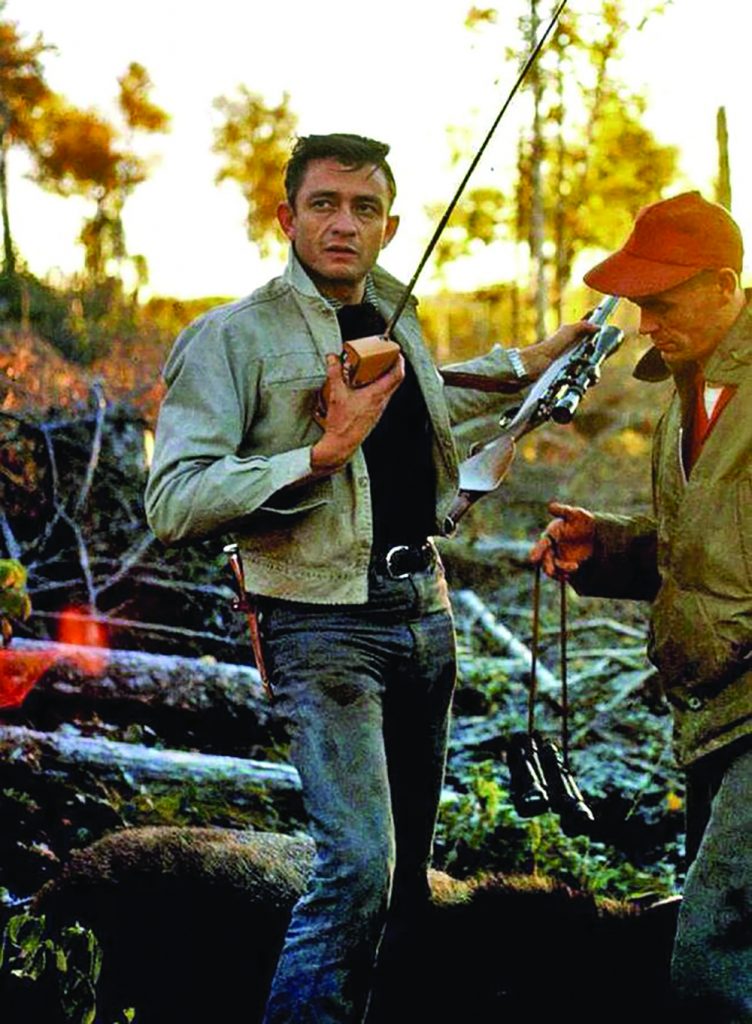 “What happened was on that very first tour, halfway through Newfoundland, she announced she was quitting, saying she was fed up with the boys,” Jonathan recalled.

“She actually went on to have a string, I think five consecutive top ten solo country hits after that. So it didn’t hurt her career, but it did lead directly to June Carter. So you’re absolutely right. If it weren’t for Newfoundland, there may well never have been a Johnny and June.”

The exit of Maddox and entrance of June Carter would lead to the professional boom for Johnny Cash, who would ride high on the single Jackson, recorded with June Carter, and released in February of 1967.

Cash would propose to Carter one year later in London, Ontario, with the pair being wed on March 1, 1968.

Jonathan Holiff, armed with the knowledge and the discovery of three dozen unearthed never-before-seen photographs from the now fabled trip by Friske, will set out to Newfoundland and Labrador this October to film the documentary When Johnny Cash Got His Moose. 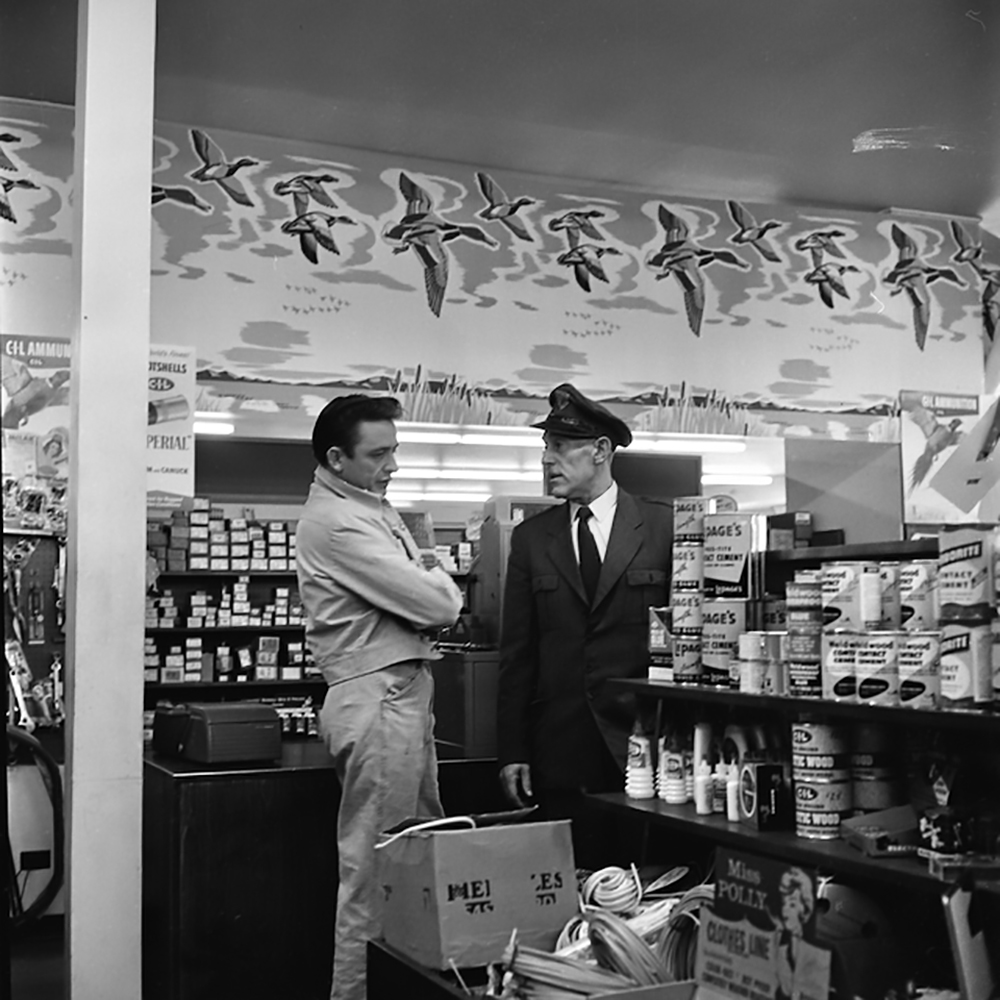 Retracing the steps of the hunt and concert tour, Jonathan and co. will film in Millertown, Badger, Victoria Lake, Grand-Falls Windsor and Gander, where a special concert (featuring David James and Big River, with NL’s own Janet Cull) and a photo exhibit will commemorate the 60th anniversary of the tour.

And while the anniversary serves as a vivid reminder of a key turning point in the career of one of country music’s most famous (and perhaps infamous) figures, it also serves as a grim callback to a dark chapter in the life of The Man in Black.

“In some respects, you could look at this story as a prequel to the movie Walk the Line or as a Johnny and June origin story. But one of the other things that we have to deal with in the documentary, albeit in passing, because this documentary is not an attack piece, it’s not going to be tabloid.

“It also happened to coincide with the very first time that Johnny’s addiction to amphetamines started to blossom. And by blossom, I mean it was the first time he ever missed shows because of it,” Jonathan explains.

“That’s why Johnny Western had to headline playing understudy to Cash in Gander. And that wasn’t the only show in Newfoundland that Cash missed. Obviously, in those days they kept this very close to their vest and they didn’t want the public to find out. And consequently, the go-to excuse was always laryngitis.

“One of the things (Cash) would say to my dad and the people on the show, and in fact, it did make it into his autobiography, is that there are two of us. Johnny’s the nice one. It’s Cash that causes all the trouble. And that was referring to kind of the dual personality that arose from the abuse of Dexedrine.

“And consequently, that comes out for the first time in Newfoundland. And the photographs are amazing because the photos of Cash around the concert dates show a performer struggling really to take the stage. Whereas 24-hours later, this 29 year old kid is in the middle of the forest tracking moose, and he looks like he’s at total peace. So the duality is even apparent in the photos.”

Taking the good and the bad of the outlaw has always been a part of the narrative and legacy of the man whose hits from Ring of Fire to I Walk The Line have been immortalized in history.

Jonathan Holiff hopes that, in chronicling the seminal period in the life of the man himself, one mired in change, of professional erosion and personal struggle, that Newfoundland and Labrador will become, in its own way, an important chapter in the Johnny Cash legend.

“I can’t tell you exactly what the result will be like (of the documentary), but I can tell you that what I’m aiming for, expressed as a high concept pitch that you might make to a Hollywood studio, is a slick music documentary meets travelog. There’s going to be an adventure travel feel to it. We’re going to want to tell Newfoundland’s story,” he shared.

“You know, I’m Canadian and I have respect for the fact that this is a Newfoundland story. It’s got to be right and it’s got to have the buy in and the contribution of Newfoundland. And so at the end of the day, we hope that this will be a feature length, 90 minute approximate film that will leave the audience wanting to visit Newfoundland.

“We want to expose Newfoundland to a wider audience, chiefly in our case, Cash fans, but documentary fans in general. This will be of interest outside Newfoundland, outside Canada, outside the United States. Cash is big around the world and in a lot of major countries. And so we do hope that it will have kind of a travel-adventure feel and at the end of the day, be kind of a commercial for Newfoundland.”