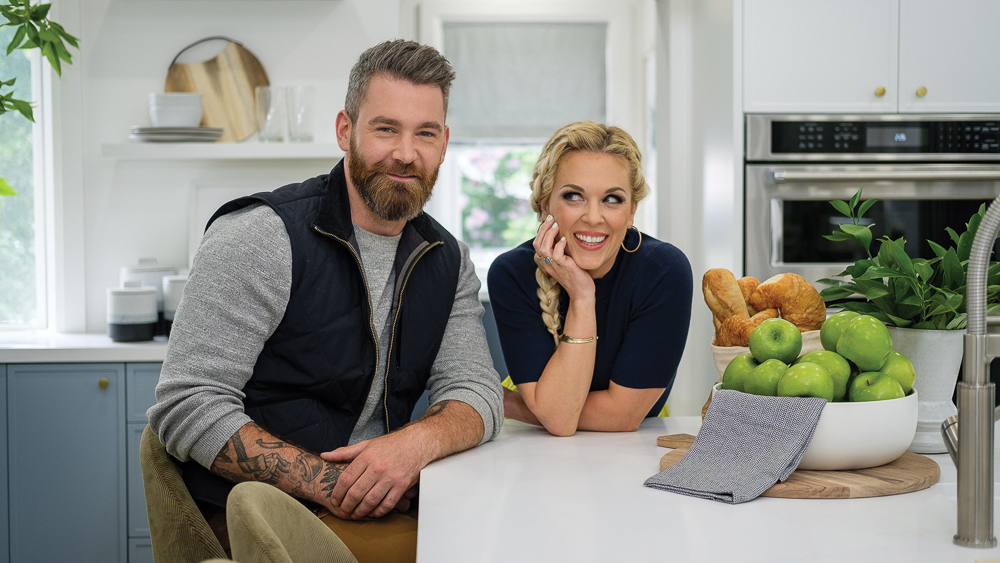 It’s easy to fan-girl over Kenny Brain. Famed first for his houseguest skills from season 2 of NTV’s Big Brother Canada, Brain has that genuine ol’ small-town Newfoundland well-raised b’y charm about him that gets attention.

He also has some fierce home renovating skills he picked up the old-fashioned way – from being around hard-working role models while growing up in his central Newfoundland home with everything it had to offer.

Now, Brain is helping the diva of home-renos, Kortney Wilson, in an exciting new season of Making It Home.

When we connected with Brain to chat about being HGTV Canada’s newest host and contractor, he mentioned how teaming up with designer Wilson to transform meh houses into wickedly deadly homes happened almost out of the blue.

When we chatted, Making It Home with Kortney & Kenny was nearing its premiere date in September and Brain was filled with praise for his costar.

“That woman is absolutely incredible. She’s a real light in this world,” he opened genuinely. As to how he wound up swinging a hammer anywhere near Wilson while the television cameras rolled? Brain chuckled and said; “How much time you got here? That’s a long story.”

First of all, being a fan of Wilson and her work ethic and style certainly helped. “Her work has such a diversity to it. It’s not only about having heart, but it has the people – the clients and what they’re going through – and it has the personality. It has the humour. (Making it Home) has the design and construction elements too, so merging all that is a dream come true,” he said.

So … to answer the “how did you get here” question? Brain, who has been doing construction for the last six years, simply answered a telephone call.

“I got a call one day saying, ‘hey, is this something you’d potentially be interested in’ and I had no idea that it would be a show at the time, but I said, ‘sure. This sounds like it could be a lot of fun.’ Three months later I get a call saying ‘we’d love you to be a part of this show.’ And my jaw hit the ground and I realized what I was really getting into. And the rest is history.”

While Brain can’t give too much away, with a few episodes already airing he can speak a little freely. “The range of homes that we do, we go from log cabins to bungalows. From craftsmen on so we do pretty much every type of home that you can imagine. And in terms of the people and the clients and homeowners that we deal with, put it this way. I was in tears every single time I met them. Every single reveal, I just couldn’t hold back.”

The work was good, but the impact? That’s what lingered, he added.“It was just such a lovely experience to be able to provide a dream to these homeowners. They had so many different reasons why they wanted us to be there.”

” (It) could be a growing family or their parents were moving and they wanted to give them a home. The stories were all so incredibly unique and heartwarming that I can’t wait for viewers to experience that too.”

From Toronto, Ontario to Nashville, Tennessee; the dynamic duo of Wilson and Brain tackled their projects with heart and enthusiasm – and humour.

Skeletons in the closets

The two have a natural chemistry, he added, one which worked well for, well, working well together.
“It’s kind of strange how close we got, how quickly, and our chemistry is very brother/sister. It’s poking fun at each other. On days that were up, we celebrated things. On days that were down and there’s issues, we leaned on each other.”

But overall? It was just fun, he added. “All we did was laugh and cry in the best way possible. I can’t express to you how much fun we really had. Even when cameras started rolling, we were still getting to know each other, getting to know all the skeletons in each other’s closets type thing and now I consider her like a family member.”

“Absolutely. All the time. I was talking to Jon yesterday. He’s back home in Newfoundland and he just had a bit of a medical issue so I checked in to make sure everything was good and it is fine.”

“You don’t do a show like Big Brother and not develop some really intense bonds, he added. “Being from the same place as Newfoundlanders, we’re going to have a time together and we’re going to develop a bond. So it’s kind of hard to break something like that and so we keep up with each other’s lives and when you get to see each other, it’s like we never left (the Big Brother house).”

It’s been two years since Brain has been home. COVID hasn’t made that easy, for one thing, he shared, but he does long for the place he grew up in. “I feel so blessed to be able to say that I’m from Newfoundland and Grand Falls-Windsor. All the talk (of home) is bringing back all these memories and you hit the nail on the head; it’s picture-perfect, to be honest.”

“The place is beautiful. The people are so lovely. Now, when I finally get home, I’ll get to experience all those things again. It just reminds me how freaking lucky I really am to come from that place.”

Brain’s love of home is seconded only by his love of hard work. We ask if his skills with a skill-saw were handed down.

“You’re exactly right. It was my dad, my grandfather – my mother’s father, Jack. He was just handy at anything and everything. He was a gardener. He was a builder. He could take care of electronics and put anything back together again. He just was good at everything he touched. And seeing that passion that he had obviously got me interested too.”

Over the years growing up, Brain helped his father build sheds and decks, though it wasn’t always fun in the sun back then, he admitted.

“I was in my early teens and it was a bit of a chore for me at that point in my life, getting a teenager to help you do stuff. I was trying to sneak my Gameboy in with me at times, but it planted the seed. It gave me the breadcrumbs to what I didn’t realize was going to eventually be my passion.”

Brain went to school and studied business. Before long, he realized that wasn’t for him. “Trades were not on the forefront when I was in school. They were presented as an option. It was university; business, or medicine. I actually went behind my dad’s back. I was supposed to go back and do my masters in business and instead I secretly went to trade school.”

When he finally told his dad the truth, his choice was embraced. “Dad was like, ‘you know, it’s not an easy profession. It’s not easy on your body. But if you think this is what you truly want to do, go ahead.’ And I did. And I can’t tell you how happy I am now to be able to create with my hands. To have this tangible product when you’re done that you created? It is hard to explain, really. It’s just a feeling I never had before.”

Wilson already has a very dedicated following, and now it’s up to Brain to continue the tradition. Any pressure? Not pressure so much, he shared, more like pride.

“It’s a shared human experience to want to have a part of your home that you’ve always wanted to renovate done or to see a space transformed into your dream space. Everybody gets it. And now you’re watching somebody else go through it and most can relate to that,” he said.
What makes Making It Home with Kortney & Kenny special is more than just cool home renovation projects, though, he added.

“It’s just really fun to watch and I’m incredibly excited for everyone to see what we went through on each project – the heart, the soul, the sweat, the tears – everything that we poured into these transformations make me so very proud.”