Voices of the Game with Brian Rogers & Chris Ballard Brian Rogers: Quite a Ride

Legendary broadcaster Brian Rogers has been providing colour hockey commentary for 30-plus years. His analysis and – at least his voice – is no stranger to fans of pro hockey after years of calling games for the St. John’s Maple Leafs and St. John’s IceCaps of the AHL and the ECHL’s Growlers. While Chris Ballard is now the voice of the team, along with Kelly-Anne Roberts and Ben Murphy, anytime Rogers gets the mic, ears perk up.

“It’s been quite a ride,” he opened, reflecting back. “It’s Chris’s gig now and he does it brilliantly, but my career was very rewarding, to say the least. But I said to Glenn (Stanford) I didn’t do squat to earn it, so I don’t know why I got a (championship) ring, but he made sure I did so bless him. That’s the reason I’m here, for the bling,” he said with a laugh. 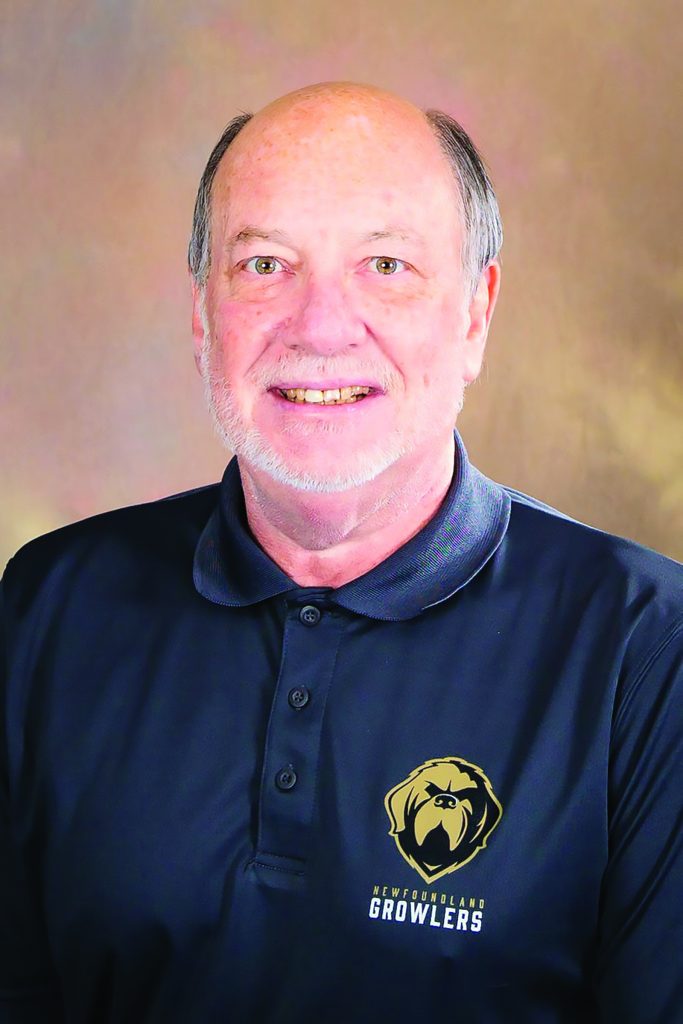 He must be recognized everywhere, we say, referring to his distinct voice. “Oh, I got a face for radio,” he joked, adding, ‘They hear my voice, and they go, ‘hey…’, but it’s not about me, it’s about us. We’re a team. It’s all about family and that’s what it is here. One big family.”

There’s been losses in the family too this year, he added thoughtfully. Shannon (Shaq) Coady was an equipment manager for two decades with the various franchises, someone Rogers refers to as his “second son” and they were “joined at the hip.” Doug O’Leary is another loss, he added. “We called him Rerun, and he was our taxi driver and he made sure we got back and forth … and we really miss him,” he said.

Another loss this year was Robin Short, sports writer and editor with The Telegram. “Robin Short was brilliant and we were  buddies, ” he said.

But one of the biggest losses was when Chris ‘Abbo’ Abbott (Buddy the Puffin) died. “Chris will never be replaced, personally speaking, because there will never be another Buddy like him. He was so engaging and so entertaining, and he put his heart and soul into everything he did.”

An interesting ‘Buddy’ fact from someone who was there. “Did you know the first person to wear (the Buddy suit) was Glenn Stanford? Of course he never told you that because he’s one of the most humble men you’ll ever meet. He’s the reason why I’m still here. He kept me around after my heart surgery and I was ready to pass the torch.”

Speaking of passing the torch, while he doesn’t call games these days, he has stepped in a time or two for special occasions. While that’s always an honour, he says “it’s all in good hands.”  “Chris is doing a great job.”

Is there a game that stands out? That’s easy, he said. “Our clincher against Toledo for the Kelley Cup. It’s difficult having favourite games as they were all favourites, but we never won anything – we had our hearts broken in 91/92 in Game seven at Memorial Stadium. We should have won that game … if Andrew McKim scores on that five on three power play … and we lose.” Laughter. “Having the home team win is an unbelievable feeling. We share some special moments up there in the broadcast booth. Your eyes fill and it’s emotional. But that (Kelly Cup) win was probably my favourite moment in 30 years and to see Glenn on the ice in his hometown with everything he’s done, that was a great day.”

It’s not an easy job, Rogers added. From the pressure to pronounce names correctly because families of these kids are listening, to making sure you are not overdoing it on stats, it’s a head-in-the-game post above the ice. “Fans don’t want to hear what that kid did when he was a Pee-We while he’s got a breakaway, right? It’s all about just straight down the middle,” he said. And there’s no better view than the Bob Cole Media Center, so you better take advantage of that, he added.

“It’s the best job being up there looking directly at the game. You can almost reach out and touch the players, and you have known many of them since they were a kid. Melindy. O’Brien. They are my boys.”

It’s “wild” that “30 years have come and gone,” he added, but it comes down to one man: Glenn Stanford. “Who’s running the ship is integral to the success of hockey. And obviously Glenn has done a pretty doggone good job. He’s the glue that made all this possible.”

CHRIS BALLARD: The Sky’s The Limit

The man who brings the game to fans around the world, Chris Ballard, gives his thoughts on the NL Gowlers

Broadcaster Chris Ballard is familiar to Growlers fans the country over as many who can’t take in a game tune in  online for free using the streaming platform Mixlr at mixlr.com/NLGrowlers.

Because COVID tossed a loop into last year’s season and meant some of this year’s games were played without fans in the stands, Ballard’s job suddenly became even more crucial.

“I definitely focus on the highs, first and foremost, just getting back after a year of COVID, and back in front of our fans … was enough of a win to keep the spirits high after a year of not playing,” he said.

A highlight this season has to be the first game back in the Mary Brown’s Centre, he added. “Things felt back to normal and seeing the numbers of fans grow over the last handful of games heading into the playoffs has been really special too … That’s been uplifting,” he said.

Ballard says his is the “dream team” of broadcasting. From Brian Rogers to Ben Murphy and Kelly-Anne Roberts, it’s been a great season. “Brian Rogers still does interviews for us and I get to work with some of the best local journalists in the province. Kelly-Anne and Ben have been doing a great job and they keep me on my toes and there’s this professionalism that they bring to the booth … I feel very grateful to work with them.” 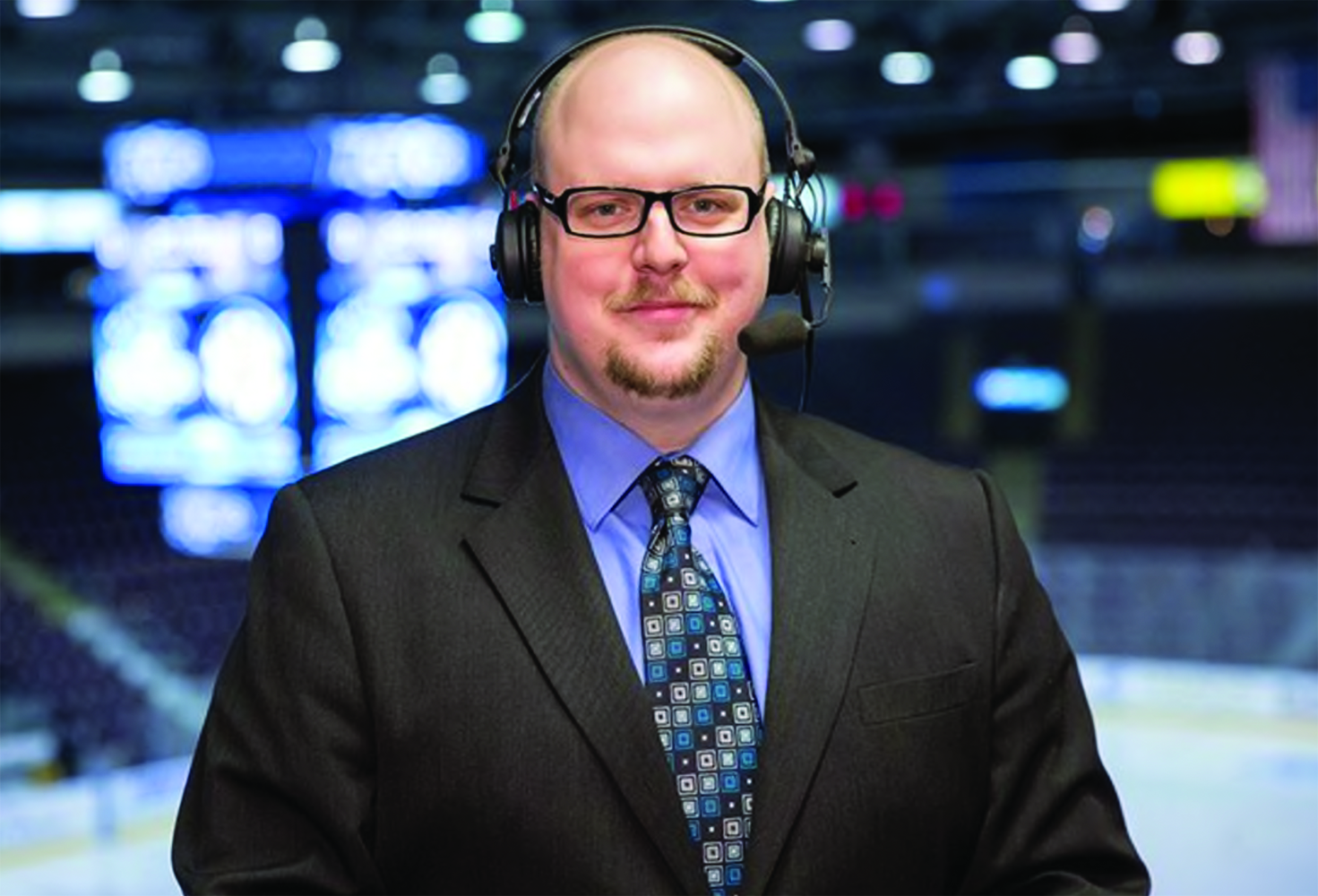 It’s a dream job too. “I feel very fortunate that I get to be the one to bring the game to the fans. Player’s families are watching away, and fans of the game who can’t get to a game tune in. I feel very blessed to be able to have an opportunity to do that.”

The Growlers have an “enthusiastic” fan base, he continued. “There’s a big appetite for the Growlers in this province and we like to provide something entertaining and fun and a bit of escape from the everyday.” He’s also developed a tight relationship with the players and those behind the scenes too, he added. “A lot of teams would probably say, ‘Oh, we have a really tight knit group’ but I just think the combination we have here of the Newfoundland players like (Marcus) Power, (Nathan) Noel, (Tyler) Boland, (James) Melindy and (Zach) O’Brien and other  players that are equally exciting to watch and come here from away like (Todd) Skirving and (Orrin) Centazzo, brings a really exciting brand of hockey.”

Combining the tight relationship of the team with the coaching and management staff and you have a winning formula, he said. “The vibe in that locker room is one of the best … We have a very cohesive, very positive unit and the sky is definitely the limit for our guys.”