When The President Met The King 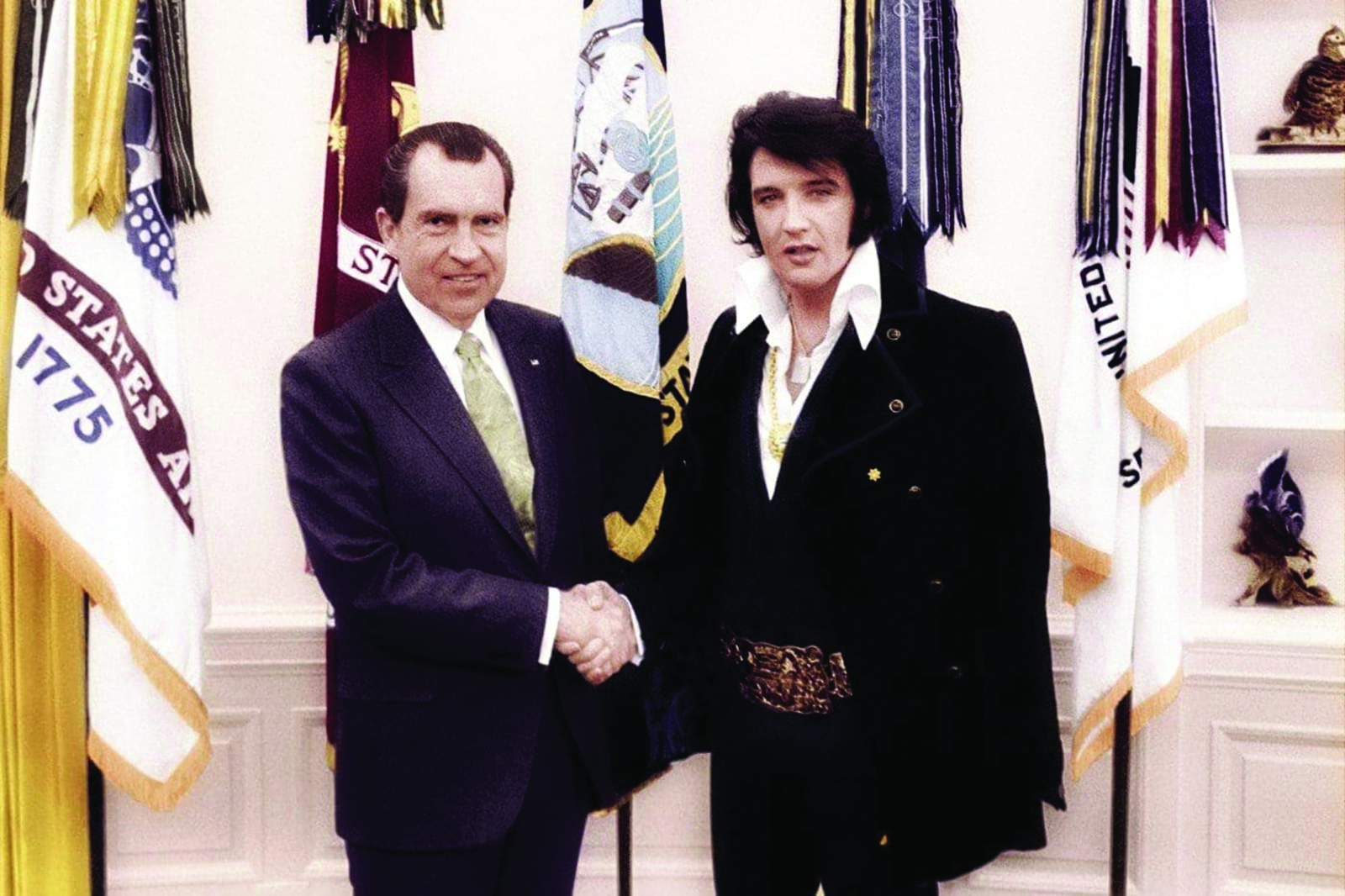 It was an image that became iconic to a decade. But the story of how the picture happened is more bizarre than the photo itself

It was December of 1970, most Americans were in holiday mode, heading to malls and shops for presents. Comedian Red Skelton, variety host Ed Sullivan, TV impresario Jackie Gleason, and screen legend Doris Day, all had Christmas specials on TV.

Over 300 workers had been exposed to radiation at a Nevada nuclear test site. The father of NHL player, Brian Spencer, was killed in a shootout with RCMP in Prince George, after he held CBC-TV staff at gunpoint to protest the station not airing his son’s game with the Toronto Maple Leafs. The movie, Love Story, starring Ali McGraw and Ryan O’Neal debuted in cinemas.

Monday the 21st was eventful for two reasons. The Supreme Court lowered and set the voting age in the U.S. to 18. And staff at the White House had to scramble with an unscheduled visit from Elvis Presley.

Elvis’ journey to see then-President Richard Nixon followed a Presley family squabble. His wife, Priscilla and his parents scolded the King of Rock & Roll for spending over $100,000 on Christmas presents (32 handguns and 10 Mercedes-Benzes… as you do).

In a huff, Elvis took a plane out of Memphis, arriving at Los Angeles airport on Saturday, Dec 19. There, he called up an old friend and former employee, Jerry Schilling.

“He had some guns with him,“ Schilling remembered years later, “and a collection of his police badges.”

[It should be mentioned that when you happen to be Elvis Presley in 1970, airport security was a very different thing.]

“Elvis always travelled with an entourage,” Schilling told an audience at the National Archives in 2010. But this time, the music executive was surprised to hear that Elvis was travelling alone.

“I don’t want anybody in the world to know where I am,” the music icon confided.

“He started giving me his flight numbers and what time he was coming in,” Schilling said. “Things that Elvis Presley never did. So on a Saturday night, about 1:30 in the morning, I picked him up at LAX. “We spent Sunday catching up and he told me, ‘I really got mad at Graceland. People were telling me how to spend my money.’

“I mean, [his father] Vernon and Priscilla were only looking out for him. But I think when the Colonel [Tom Parker, his manager] got involved, he got in his car and went to the airport. He just had an American Express credit card.”

Elvis was fixed on getting to Washington, intent on meeting President Nixon in order to get a badge from the federal Bureau of Narcotics and Dangerous Drugs.

Schilling and Presley caught a late-night flight from LAX destined for the nation’s capital. On the way, Elvis commandeered two pages of American Airlines letterhead.

His handwritten letter laid out his reasons for why he wanted the president to give him a badge, citing his concern for the country’s “drug problem,” and how young people look up to him and trust him. Irony was not in short supply on this trip.

“Sir, I can and will be of any service that I can to help the country out,” Presley wrote.”I would love to meet you. I will be staying at the Washington Hotel under the alias Jon Burrows. I will be here for as long as it takes to get the credentials of a federal agent.”

Schilling remembers the night flight to Washington as special, not only for accompanying Elvis on his badge quest, but also that numerous American soldiers were also travelling, heading home for the holidays.

Schilling remembers that Elvis struck up a conversation with one G.I. for 10 minutes then he came back to Schilling’s seat and said, “Where’s that money?”

Earlier in the day, Elvis cashed a personal cheque for $500 at the Beverly Hills Hotel.

Schilling said, “That’s all the money we’ve got!” Elvis replied, “You don’t understand. This man’s been in Vietnam. He’s going back home for Christmas to see his family.”

After landing in D.C., The King was insistent that he drop off his letter right away and so by 7:00am, Elvis and Jerry were standing outside the gates of the White House.

Inside, Bud Krogh, one of the president’s lawyers, was approached by another staffer who declared, “The King is outside!” Krogh was confused because after consulting the president’s diary for the day, saw no monarchs on the schedule.

Over the next three hours, President Nixon’s staff go into panic mode as they try to determine not only if Presley can meet Nixon, but should he, and when? Nixon’s chief of staff, Bob Haldeman got involved. Draft memos started circulating about how the meeting could bolster the president’s image.

The Secret Service got involved when it discovered that Elvis was carrying a gun, meant as a present for Nixon.

Eventually, it was decided that a meeting would be held, 11:45am in the Oval Office. Ali Atkins was the White House photographer and the job fell to him to capture the moments.

“And the president had never seen anyone quite like that either.”

Two men, icons of the era in which they lived soon bonded as fathers, with Elvis showing off pictures of his daughter, Lisa Marie.

According to Bud Krogh’s notes of the meeting, after the back and forth, Elvis got to the point.

“Mr. President, can you get me a badge from the Bureau of Narcotics and Dangerous Drugs?”

Nixon looked around at his staff to find out if such a gift was legal, and they gave their assurance to the president.

Krogh reported that Elvis was overcome and grabbed the president to hug him. “That wasn’t the norm in that White House,” he added.

The whole meeting, the notes written, and the photos taken remained a secret from the public for a year. When it was written about in 1972, few showed much interest.

In 1977, the fates stepped in to claim the life of the King of Rock & Roll. The meeting between Nixon and Presley was largely a footnote. However, in 1988, a newspaper in Chicago reported that thousands of people had requested a copy of the photo taken during that 1970 meeting. It suddenly became big news and a big fundraiser for the National Archives, the repository of those images.

In a 2010 article for Smithsonian Magazine, Bud Krogh shared why he thinks the photo endured.

”It’s a jolt seeing them together. The leader of the western world and the king of rock ‘n’ roll in the same place, and they’re clearly enjoying each other. And you think, ‘How can this be?’”