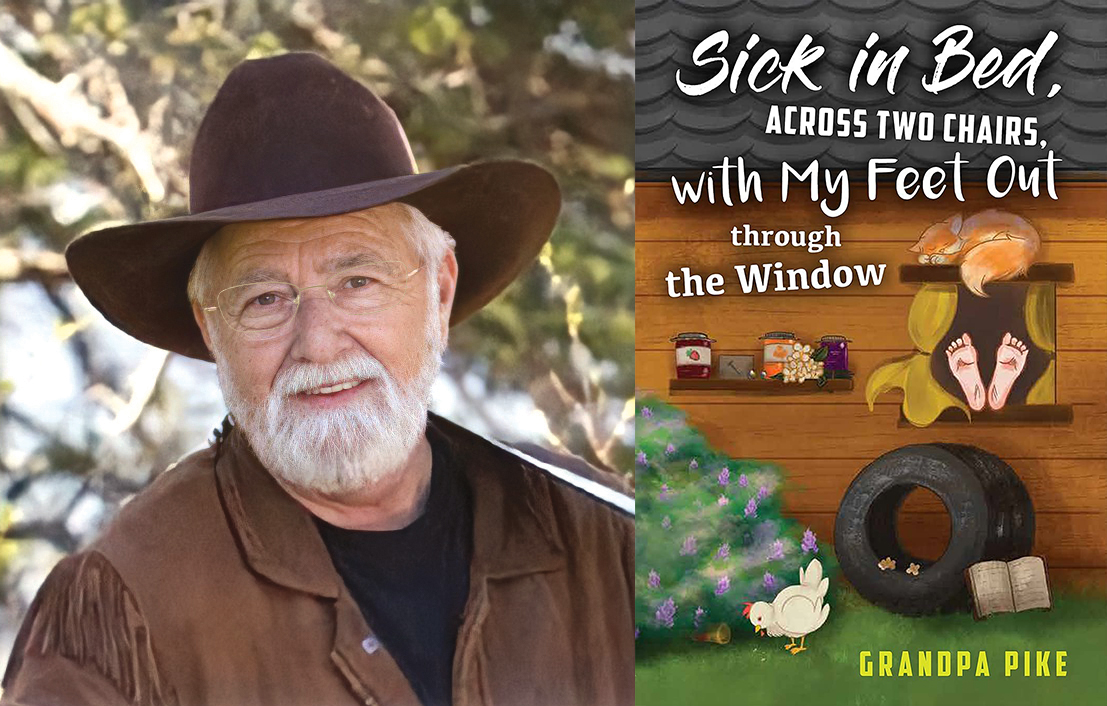 The author of Sick in Bed, Across Two Chairs, With My Feet Out Through the Window, shares his very personal battle with terminal illness while remaining positive

At 77 years of age, Grandpa Pike (real name Laurie Blackwood Pike), says he’s lived a good life. He’s an accomplished author with many books under his belt, including Grandpa Pike’s Outhouse Reader, Number Two, and Pea Soup for the Newfoundland Soul, for one thing.

Now, as he faces the biggest battle – a terminal illness – he shared how his  latest book, Sick in Bed, Across Two Chairs, With My Feet Out Through the Window, is the latest in a literary legacy he feels honoured to leave behind. The ‘Sick in Bed’ line is something his father always said, he recalled.

“Dad was a minister and he’d be in his office working and he’d say ‘if anyone comes, just say I’m not here,’ when he was busy. And we’d say, ‘well, what if anyone comes and says they see your car there and they know you’re home,’ and he’d say, ‘just tell them I’m sick in bed, across two chairs with my feet out through the window.’ It’s a Newfoundland saying, I’m thinking, but I knew it from him,” Pike shared.

Pike, who was not timid when it came to the fact that he has a terminal illness, says he has his sixth book “ready to go” but offered that “chances are good it will never see the light of day publishing-wise” because his illness has advanced. Beaton Tulk’s memoirs, A Man of my Word, was penned by Pike. In fact, it was their shared illnesses that united the two in the first place, Pike shared.

“(Tulk) and I bumped into each other at the Health Science (Centre) one day and that’s how we ended up getting together to write the book. We both told the other  so we knew all along that we both had a terminal condition.”

Pike has been fighting a metastasizing carcinoma. “There’s no known cause and has nothing to do with lifestyle. Apparently it’s just a random thing that hits. And there’s no known cure, just different courses of medicine that can slow down the spread of it throughout the body,” he shared. With“terrible side effects” to deal with, nothing known to modern medicine seemed to help, he added.

“I decided in February of last year that there is just no point in putting the body through any more turmoil without any hope of improvement and with the risk of very serious side effects. So I was told I’d be lucky to make it to Christmas. And now, Christmas is over, and I’m still around,” he offered positively.

His only daughter is home visiting, he added, and life is “very much worth living.” In fact, he added, it’s “good to the last drop.”

“I could go on and on about my complaints. Things that keep me from travelling or from doing other things, but why? I can deal with all that stuff, especially when you were told you might not make it to Christmas and you think, ‘well, it’s all borrowed time now. Every day is a blessing.’ You don’t dwell on the negative you focus on the positive.”

Like the fact that his daughter, an emergency room nurse, was able to spend three weeks over the holidays with her family. “I’ve accepted things, and I think family are quite pleased that I have. I’m 77 and lived a good, long life and I’ve accomplished pretty well everything I wanted to. So, I’m ready,” he said.

Pike reflected. “I started making notes and writing things down when I was a teenager and while I lost most of those notes when we had a flood in our basement, I found that once you commit something to paper, you sort of remember it,” he shared.

Look at the up-side

Pike’s writings are usually small stories, and with rare exception, they are true tales.  “One of the things that I always wanted to do was write and tell my story. Share some funny stories and hopefully some that may be inspiring or thought-provoking or whatever. I’ve changed names and locations and places to protect somebody who may still be alive or wouldn’t want to be identified, but it’s pretty much autobiographical otherwise.”

One chapter in his latest book is people he won’t forget. “Every story is about people who meant a lot to me. I don’t know if they’re my favourites of the whole book, but they’re certainly very personal,” he said.

We ask if he feels that he’s leaving a little bit of a legacy behind. He paused.

“Yes, I do. I do. My daughter has every one of my books, and there’s a lot of stuff in these books that she didn’t know as there were stories she never heard about. So it’s sort of like a history thing for her and for my wife as well. I was 37 when I met my wife so I had quite a bit of life lived before I met her.”

Pike said he always went with a humourous angle when it came to sharing his tales. “I’m not a sports star or a politician. I’m just someone with a story to share. I always felt that people would be more likely to want to read things if I took a lighter approach. That’s how I tackle my illness too. I can focus on the negative, or focus on the positive. I always try and look at the up-side. The reality doesn’t change, but how you feel about it does, and that’s what matters.”