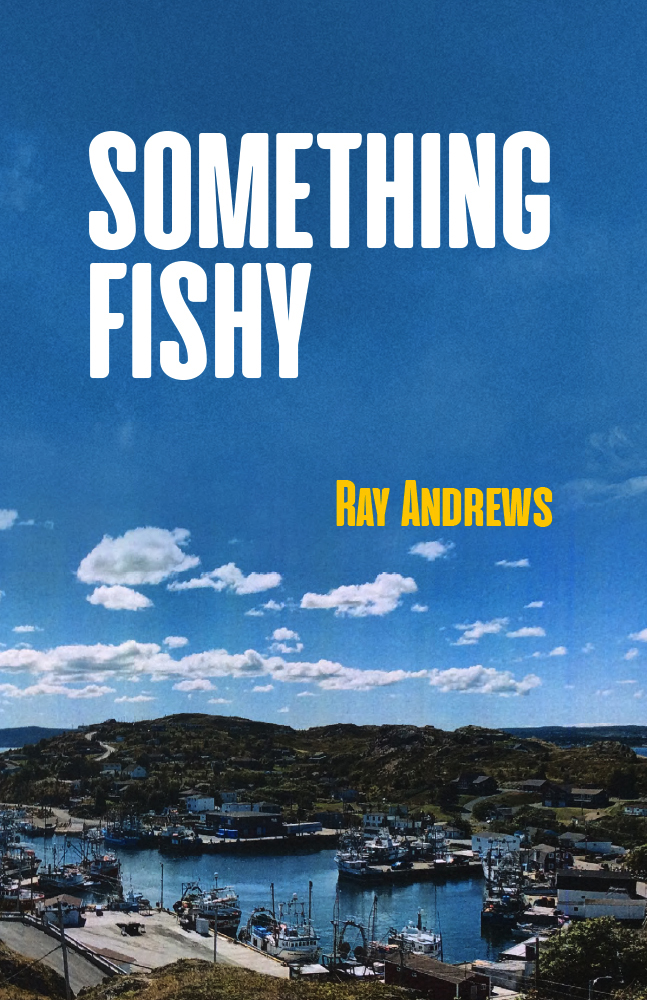 With 80 years of living and an enviable career in the heat of things politically to bank on, former Port de Grave livyer Ray Andrews tells the tales that didn’t get away in his brilliant
tell-all, Something Fishy

Ray Andrews has led what most would consider an enviable life. From growing up in the picturesque fishing community of Port de Grave to a career spent as a senior advisor on the fishery with provincial, federal, and territorial governments, Andrews has had many memorable experiences. When we sat down to chat about his first book, thrillingly titled Something Fishy, Andrews and I first bonded over our mutual love and respect of the fishery and those who rely on it to earn a living. We also jumped right into another topic we both felt passionate about: politics. Andrews offered he was blessed to have both those passions shape his life and his career.

“I had a lifetime of fish, I guess you could say, and a half lifetime of politics. Both of those shaped my life,” he began.

When he sat down and thought about writing a book, he realized he had things worth sharing.

“There’s things fishy that the public don’t know about when it comes to politics, and as a bureaucrat, you get those back-room conversations and first-hand knowledge of what goes on, or what almost goes on. And so I considered all of the things that I wanted to write about and said, everybody, but everybody has written about the history of the moratorium, for instance, but I want to add my little spins on the fishery-side of politics on some of that history.”

Using copious notes and files from years spent advising governments, along with his own diary entries, Andrews paints a picture in Something Fishy that’d make even the most secure head spin.

“I took the issues of the day and made them a little fishy by adding what happened behind the scenes. There’s a few bits of humor and quite a bit of background stuff in there that didn’t become public before now,” he teased.

We ask if Andrews had a favourite period – or person he worked with and advised – in his career.

“I’m one of those who got up and with minor, minor exceptions, loved every day that I went to work. I worked well and enjoyed working with a lot of people, including the fish people and the political people, so it’s hard to put a single person out front.”

But, he admitted, there are two stand outs and they were Tom Rideout and John Crosbie.

“Of course, Tom was in the provincial scene and Crosbie – Skipper John – was on the national scene. They both were very different people, but the part that I really, really enjoyed is that they were workaholics and I think I might have been one myself,” he said with a grin.

The second thing he noted about those two gentlemen was that they always looked for other opinions. “I could say to both men easily, ‘I’m going to tell you what you need to hear, not what you want to hear.’ And I said ‘the reason I do that is that my role as a deputy minister, or political advisor, is to make you look good.

“I think there’s a lot of people who don’t really fully appreciate that. Sometimes you get this old adage that a bureaucrat, or ‘those government people’ don’t do much work anyway.  I gotta say, that’s so far from reality in many or most of the situations I was in. I worked probably a lot harder than many did in my lifetime, so don’t give me that line.”

In many cases, he continued, a minister can walk in and say, ‘here’s what I’d like to do within six months,’ and that’s all you have to go on.

“You get a few lines and you run with it. Then there’s the advising piece. I’d say, ‘Minister, that is not going to be a good result publicly. I think it’s a wonderful idea and you might think it’s wonderful but you have not been in the trenches or in the job around the south coast and you have not been confronted by the people that you’re going to impose this additional policy on. You’re looking for votes or not?’” There’s so much ‘fishy’ in Something Fishy, including the fact that Andrews was fired by Clyde Wells for being “a little bit ‘blue.’”

“I grew up in a small town, Port de Grave. The town was so ‘red’ that my mother, when she worked in the polling booth, as you read there in the book, she sometimes came home at the end of a day and said ‘there was only two voted blue this time,’ and everybody kind of mocked the Andrews clan as solid Tories. You couldn’t escape that. That was part of your genes.”

Fishery in the Blood

Even though, he added, as a bureaucrat, he couldn’t recall ever favouring a political party in making a bureaucratic decision “partly because that was for the ministers to do.”

The story of the firing unfolded. “When Mr. Wells came on board, he was certainly well informed on this guy Andrews. He had a very famous minister at the time, John Efford who was also from Port de Grave and I don’t think John ever made the mistake of thinking I was red,” Andrews laughed. He can chuckle now, though it wasn’t a good day back then.

Andrews grew up around the fishery, in fact he says, “the fishery was in my blood.” So was hard work and community commitment. “As I look back now, I can honestly say that growing up in Port de Grave kind of triggered me to be doing a little more than required because of the competitiveness that existed back then. As I look back after 80 years, you will find that the fishermen and the people of Port de Grave took the lead on a lot of the research, development and promotion of the various aspects of the fishery. That’s the part that stuck with me, which maybe helped make me a workaholic. You have to do your best.”

What means a lot

Andrews has a few goals, things he hopes folks who read Something Fishy come away with.

“My hope is that I would spur people to think that the bureaucracy is a very important part of our life. But I would add one part to it, and that is that in all of your life, your community based activity, and maybe you would use the word volunteer, but your community based activity means a lot. And while in the urban centers like St. John’s, it might not be as visible, if you’re in the rural parts of this province, the role of a volunteer or a community activist is probably needed even more so now than it was back then.”

For more on Andrews and Something Fishy visit drcpublishingnl.com

One thought on “WRITING WORLD | Something Fishy”