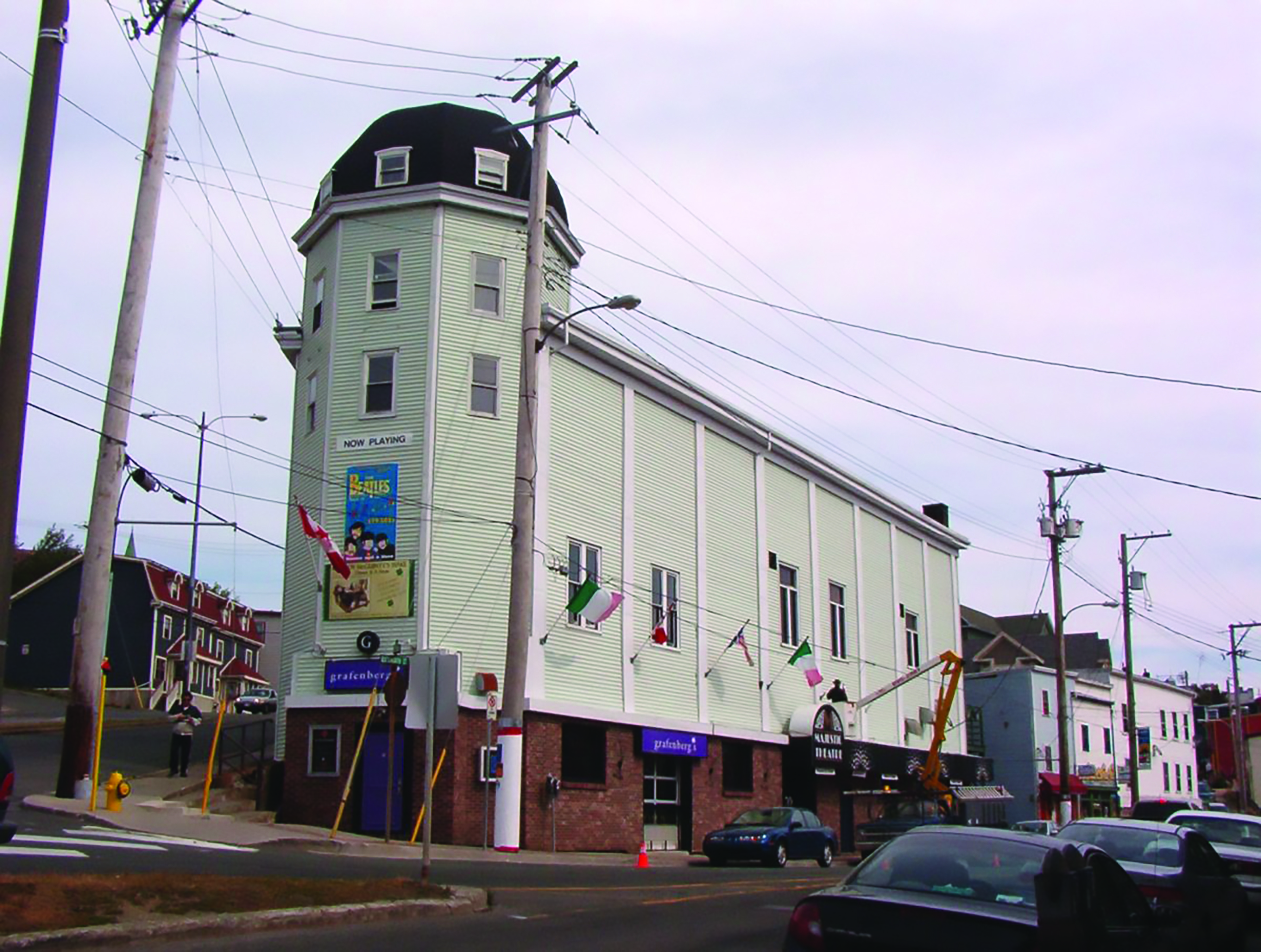 It’s one of the few flat-iron style buildings in the world and yet, there it sits, unused, on the corner of Duckworth and New Gower streets in downtown St. John’s

The place known as the Majestic Theatre was built in 1919 and found prominence as a political rallying point for some of its first half century of existence. According to Canada’s Historic Places, The Majestic was a staging area for the riot of 1932 where frustrated citizens marched to the Colonial Building protesting poor economic conditions and an exploitative political class. Then Prime Minister, Sir Richard Squires, was said to have barely escaped with his life.

During the late 1940s, the building was the site of more political theatre, staging several debates about confederation with Canada. It’s life over the last 50 years has been far more sedate with the most riotous things to be heard under its domed roof being music, laughter and applause. More recently, the Pentecostal Assemblies of NL were the owners, however, a fire in 2017 set back their plans for the building.

In January of this year, a new lease on life for the historic property was granted when St. John’s City Council approved the sale of The Majestic. That’s where Terra Bruce Productions entered the picture. Terra Bruce first made a name for itself locally and across Canada producing the musical No Change in the Weather, telling the story of a family embroiled in their role over the negotiations for the original Churchill Falls hydroelectric deal between Labrador and Quebec. Since then, executive director Ann Connors has come on full time to help guide the professional theatre company. “We bought the Judy Knee studio on Mayor Avenue with the intent of making that a creation space, and a recording studio,” she says. “But we knew very soon after we turned the key in the door, that we had completely outgrown the space. We’re a pretty big staff now, 10 full time employees, plus a resident artist, and a company of musicians, over 20 staff now.”

Connors knew The Majestic might make a good venue for Terra Bruce to consider as a performance space, as well as a good place for the company to own as a public eatery and downtown hotspot.

“We’re ambitious,” she admits. “So to create large scale musicals, that needs space. We did the first iteration of No Change in the Weather at the LSPU Hall with a successful run of three weeks. However, the Hall is rarely available, let alone for three weeks at a stretch. We’re pretty limited for space here, so as this place has been closed ever since the fire [in 2017], we approached the owners.”

The story of how Terra Bruce was in a position to buy the disused venue goes back to the spring of 2018, according to their chief operating officer, Bob Hallett. He was introduced to businessman and philanthropist, Walter Schroeder. The Manitoba-born son of Ukrainian immigrants took a passionate interest in the culture of Newfoundland and has been using his family foundation to direct capital into arts and culture projects.

Hallett remembers his first encounter with Schroeder as, “he was referred to me as someone who had a strong background in Newfoundland music, but also a strong business background in live entertainment and who knew how to get music on stage. So when he reached out to me, I wanted to see a commitment to the organization.”

Hallett’s 30 year association playing with Great Big Sea and their place as the province’s best-selling musical act of all time certainly had him well positioned to know how to marry art, enterprise and financial success. “I know the standard we need to work to. I’ve worked at the Stratford Festival, Come From Away, and so I knew the risk and investment level, and more than anything else, the commitment of time. That was the start of a very long, very steep and slippery mountain that’s led us to The Majestic.”

It’s hardly a secret that the spending habits and people’s investment in cultural events outside the home over the last two years have been drastically derailed. When renovations are complete and Terra Bruce has a new entertainment venue for a major capital city, the unavoidable question lingers. For this “theatre of dreams,” if Terra Bruce builds it, will they come?

“That’s the biggest challenge, I think,” admits Hallett. “For any arts organization, to make a persuasive case that the collective experience of going out will be more interesting, exciting, and fulfilling than sitting at home watching Netflix or Crave or whatever.

“How do you make the audience experience better? I mean, one of the reasons the Iceberg Alley Festival worked is the audience experience was better. So, we’ve taken all that into our thought process and how do we make this a cultural theatre? The entrance and exits, the lounge and the bar, what you do with your coat, all that has to be taken into account.”

Like the rest of the world, NL audiences have been steered clear of local arts and culture in favour of a collective experience created through online streaming apps. Thus far it hasn’t been a space where NL, indeed Canada, has much of a foothold. However, Hallett feels opportunity lies in the flickers of interest people show in local productions.

“One of the reasons that people are watching Son of a Critch so aggressively is they see themselves reflected on that show. They don’t see themselves reflected in 99.9 per cent of the television that’s on the air right now. We want to tell Newfoundland stories with Newfoundland artists, but on a scale that’s rarely been done here. People want to see their own experience, their own lives, their sense of humour, their music.

“We have an energy in St John’s that you don’t find in most cities,” Hallett notes. “However, Newfoundland has been dominated by television and film of late, and we’re trying to bring back pure theatre, to spotlight and demonstrate the level of talent, ideas and creativity we have.”

As for executive director, Ann Connors, the passion for the feeling of being downtown permeates her love of creating a space for so many others to enjoy.

“We’re hoping to open in the fall,” she hesitantly offers. “I think we’ll have had three or four months of folks getting used to being out and about and perhaps eager for that experience. You know, one of the grandest ideas that the city has had is the pedestrian mall. And anything we can do to revitalize the downtown core, another choice for people, it is a benefit.

“It’s been shown that for every dollar invested into an artistic product, $5-7 goes back to the community. And being able to contribute to that is really exciting.”

She ends gleefully, “You know I love St. John’s, right?”