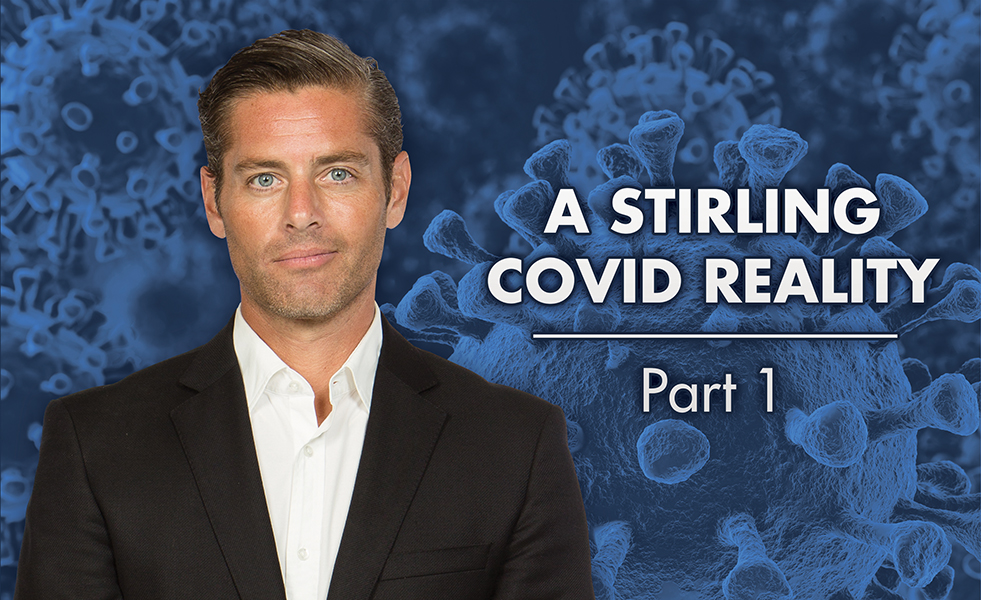 In part one of our in-depth three part series, Jesse Stirling outlines his taxing battle with COVID-19

Many know Jesse Stirling as the face of NTV’s Meetings With Remarkable People.  Grandson to the late, great Geoff Stirling, and son of the vivacious Judy Stirling and highly respected Newfoundland Broadcasting President Scott Stirling, this young-gun from a long-standing legacy of broadcasting royalty  seems to have it made.

Married to the love of his life, Amanda, and father to precious daughter Olivia, Stirling would seem to have a life many could only dream of. But Stirling has had an interesting road of late. The last time The Herald sat down to chat with Stirling, it was about surviving a near life threatening heart attack.

Stirling has long been candid with the magazine his grandfather started, so it came as little surprise that he would want to share his latest brush with illness with Herald readers first.

Wiser words were perhaps never spoken when Stirling began the chat with, “It seems to be the year where it’s very hard to make plans and things can get wiped out in an instant.”

Stirling’s encounter with COVID began last August. With plans to head to Newfoundland for the warmest months of the year, and with many interviews planned and booked for his popular inspirational series, Meetings With Remarkable People, Stirling was ready and eager to go. So much for best-laid plans, it seems.

“I started feeling like I had a really bad flu. And we’ve all had a flu, so it wasn’t that scary. I just thought, ‘OK, I’m not feeling the best.’ And then my temperature went up and I had really bad night sweats and cold shivers. And my wife actually said, ‘you should get a COVID test,’ but I was basically in denial about it,” he said.

Stirling was dedicated to hand washing, he added, and out-and-about in California, he wore a mask. He’s also vaccinated. “This doesn’t happen, right? Not when you’ve done everything you were told to do. But sure enough, the test came back and I was positive. And this was the beginning of August.”

This was days before getting on a flight bound for Newfoundland.

Stirling became quite ill, he added honestly. “What I found incredible was how anguish-filled, and what a painful experience this was physically and in my mind too. Coronavirus only attacked people who were severely ill or very elderly and I just turned 50, and I am a pretty fit guy. I just thought this doesn’t happen to me. Not now.” But, he added, it did. In the beginning, at least, he wasn’t very ill. But that changed. “The first couple days, it was not that scary. ‘We’ve all had it flu. I can get through this,’ I thought.’ It was when I just wasn’t getting better and it kept getting worse and worse and worse that I got scared,” he shared.

“I actually broke a laptop computer projectile vomiting over it. I’m trying to work through this whole thing. And I believe it was at that point I made an actual announcement on social media. Like, in my mind, the whole time, I’m still thinking I can save this trip. I can still tape my shows. I’ve got all these great reservations made at all these fantastic Newfoundland restaurants. I don’t want to give it up at this point. But I need to make an announcement. I know I have to give in when my oxygen level dipped to the point it was dangerous.”

On Wednesday, January 19th in part 2, find out about Stirling’s long  road to recovery and about the log-term impact of ‘Long COVID.’