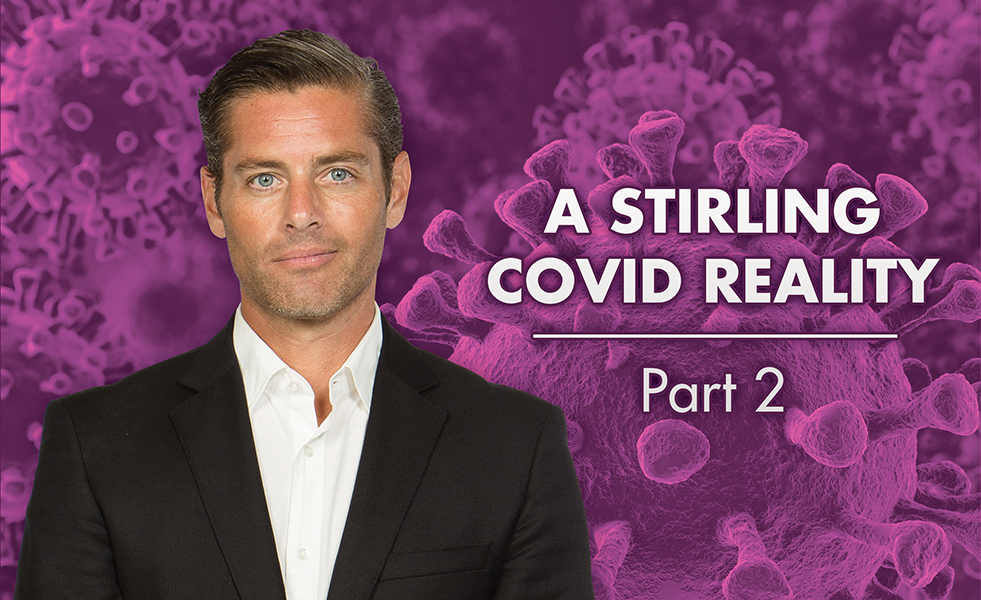 COVID and its many variants have derailed many well-laid plans, but one high-profile NLer is testament to the fact that COVID can have a much more personal cost

That most people will eventually get COVID-19 was one of the messages the province’s Chief Medical Officer, Dr. Janice Fitzgerald, laid out the day the province of NL moved to a modified Alert Level 4.

That’s certainly proven to be the case as many high-profile names announced they had COVID over the holidays. From NL’s Minister of Health, Dr. John Haggie, to Federal MP and Cabinet Minister Seamus O’Regan, to some notable names in the entertainment industry like comedian Lisa Baker and Come From Away star, Broadway’s Petrina Bromley, COVID didn’t skip over anyone, it seemed.

NTV’s Jesse Stirling was struck early, and struck hard, as we learned in part one. Many know Stirling as the face of NTV’s Meetings with Remarkable People. Grandson to the late, great Geoff Stirling, and son of the vivacious Judy Stirling and Newfoundland Broadcasting President Scott Stirling, the young-gun in a long-standing legacy of broadcasting royalty seemed to have had the world at his fingertips. Married to the love of his life, Amanda, and father to precious daughter Olivia, Stirling would seem to have a life many could only dream of. But, as he’s shared exclusively with The Herald, Stirling has had an interesting road of late.

The previous time The Herald sat down to chat with Stirling, it was about surviving a near life threatening heart attack. Stirling has long been candid with the magazine his grandfather started, so it comes as little surprise that Stirling would want to share his latest brush with illness with Herald readers first.

Stirling’s encounter with COVID began last August. With plans to head to Newfoundland, and with many interviews planned and booked for his popular inspirational series, Meetings With Remarkable People, Stirling was ready and raring to go. So much for best-laid plans, it seems. Stirling shared he felt as if he had “a really bad flu.” Night sweats. Cold shivers. A high temp. Days before he was supposed to get on a flight bound for Newfoundland, the test came back: Stirling was positive for COVID-19.

The first couple days, he shared, were not that bad. But then the illness took hold. When his oxygen level dipped to the point it was dangerous, he knew he was in for yet another fight of his life.

When Stirling made the announcement on social media, he was still optimistic. “In my mind, the whole time up to this point, I’m still thinking I can save this trip. I can still tape my shows. I’ve got all these great reservations made at all these fantastic restaurants. I don’t want to give anything up at this point. But then, when my oxygen dipped, my doctor really started freaking out.”

Stirling shared it took a month of “really great medical and self care” to get to the point he could walk the dogs around the block. Because Stirling was struck with COVID fairly early in the pandemic, there was backlash. “You wouldn’t be embarrassed to admit online if you had diabetes or if you had high blood pressure or pneumonia, but there’s so much political charge and social stigma behind Coronavirus that I had my own struggles with the news,” he admitted.

The Delta variant was shown to particularly be hard on middle aged men, he continued. When you add the pressure from those online, then the road was not smooth. Most, Stirling offered, were kind. “‘Sorry, you got sick. Hope you get better.’ When you’re really sick, there’s nothing else you want to hear. Those messages were great.”

“People said I was a liar. ‘You can’t get Coronavirus if you’ve been vaccinated’ or ‘you should have beaten it by now, you’re not doing it right.’ Some started to question which medicines are right for this kind of thing. A real blaming the victim began. And then some questioned how I caught it in the first place. ‘Oh, you were traveling,’ I heard. It’s almost like I deserved it since I was out doing business and living my life.”

Stirling’s wife and daughter both caught the virus, he added, but both “crushed it” he said, and had mild symptoms. “I felt horrible about that, but my wife was under the weather for three days and didn’t miss a minute of work and my little girl had one night of a fever and then totally bounced back the next day.”

Still wanting to be cautious, the family remained under self-imposed lock-down to make sure. It was tough, he shared. Olivia didn’t feel sick, so keeping her out of her beloved daycare was tough on the family, for one thing. Plus, Stirling offered, he really was no help at home.

“I give immense credit to my wife for keeping the whole family going because literally getting out of bed and going to the tub was a Herculean task for me.”

Stirling was so ill, he even experienced what he called an “incredible encounter with angels.”

“That’s the craziest part of it. And I know people might think this is a little out there or doubt that it happened, but this really did happen to me,” he opened.

He wasn’t getting better, he continued, so he was receiving prayers and support from those he knew. “When you haven’t eaten for 10, 11, 12 days, that presents a host of problems on its own. Sometime around day 17, where I just couldn’t take any more, I believe I even cried out to my wife that I needed to be taken to the hospital. I knew something was going seriously wrong. At that point, my lungs were under attack. Every breath was an effort and I made it into the bath as that was the only thing that gave me relief from the fever and the cold shivers.”

Stirling shared he “passed out” in the tub for about five hours. “I was just in there and while I was in this passed out condition, I had a vision of what appeared to me to be angelic. It was this star being and I’m in outer space. It’s like a galaxy-looking place with stars and all that, and the angels are descending some kind of star-lit staircase or star staircase. And they were bringing me to wherever they were going to bring me.”

There was no feeling of fear. No sense of being threatening. There was only peace. “It looked like I was going to a good place. But I started freaking out and within this vision of my mind’s eye, I’m saying, ‘I can’t go. It’s not my time yet. I have a little girl.’ And so it was the face of my little girl, Olivia, that really made me fight very hard to come back into my body.”

Stirling shared that he wished this story ended with a “happily ever after” but it wasn’t the case. “I wish I could say I immediately felt better and I was great. But it was like bottoming out. I essentially feel like I died for a few minutes on that day, and then I slowly started turning the corner and recovering after that,” he said.

On Friday, January 21st in part 3, find out how his mother saved his life, plus, Stirling’s battle with Long-Term COVID and how his commitment to the empire his grandfather created, inspired him