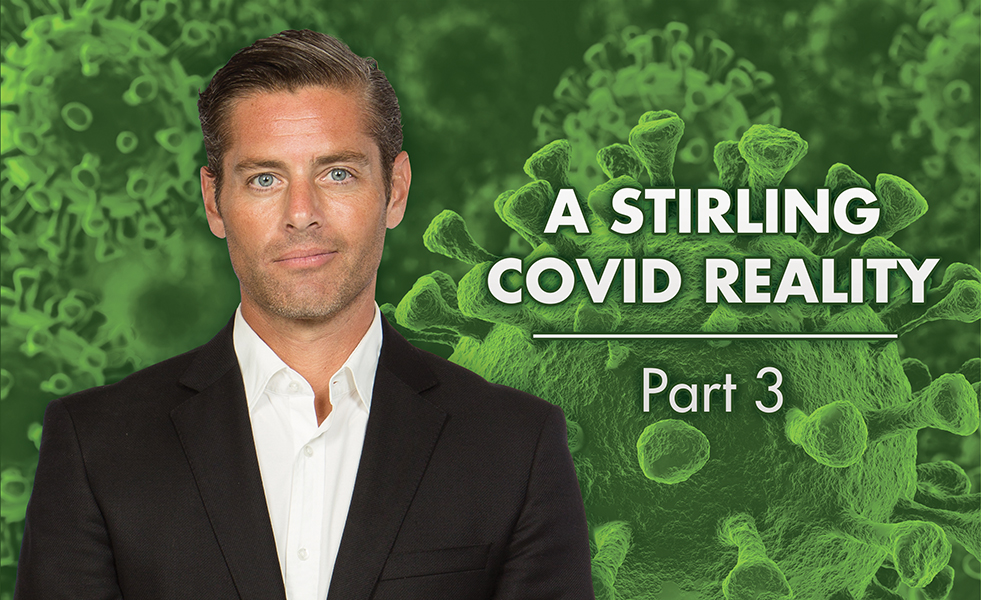 COVID and its many variants has come with a cost both personally and beyond for so many, but one high-profile NLer believes that while COVID has so many negatives, it can be overcome

ewfoundland’s Chief Medical Officer, Dr. Janice Fitzgerald, warned that, at some point, COVID-19 would eventually impact all of our lives. Over the holidays, NL’s Minister of Health, Dr. John Haggie, had fought the good fight, as had MP and Cabinet Minister Seamus O’Regan.

COVID doesn’t care beyond the fact that it can and will affect anyone it comes in contact with. NTV’s Jesse Stirling was struck early, and struck hard, as we learned in part one and two of this three part series. Many know Stirling as the face of NTV’s Meetings with Remarkable People. Grandson to the late, great Geoff Stirling, Stirling’s is yet another strong voice in a long-standing legacy of broadcasting royalty. But status and fame doesn’t protect one from a virus as determined as COVID.

It was Not to be

Married to the love of his life, Amanda, and father to daughter Olivia, Stirling had the world at his fingertips. As he shared exclusively with The Herald, Stirling has had some medical challenges. He survived a near life threatening heart attack, for one thing, and now, a brush with COVID. Stirling’s encounter with COVID began last August. With plans to head to Newfoundland, and with many interviews planned and booked for his popular inspirational series, Meetings With Remarkable People, Stirling was ready and raring to go. It was not to be.

Stirling’s COVID battle even involved an interesting vision, or encounter, while at his worst. With little food for over a week, and struggling to get enough oxygen into his body, Stirling “passed out” in the bathtub in his home.

He had a Vision

“Sometime around day 17, where I just couldn’t take any more, I believe I even cried out to my wife that I need to be taken to the hospital. I knew something was going seriously wrong. At that point, my lungs were under attack. Every breath was an effort and I made it into the bath as that was the only thing that gave me relief from the fever and the cold shivers,” he shared.

It was there he had a vision. “It was this star being and I’m in outer space. It’s like a galaxy-looking place with stars and all that, and the angels are descending some kind of star-lit staircase or star staircase. And they were bringing me to wherever they were going to bring me.”

There was no feeling of fear. No sense of being threatening. There was only peace. “It looked like I was going to a good place. But I started freaking out and within this vision of my mind’s eye, I’m saying, ‘I can’t go. It’s not my time yet. I have a little girl.’ And so it was the face of my little girl, Olivia, that really made me fight very hard to come back into my body.”

Stirling shared that he wished this story ended with a “happily ever after” but it wasn’t the case. “I wish I could say I immediately felt better and I was great. But it was like bottoming out. I essentially feel like I died for a few minutes on that day, and then I slowly started turning the corner and recovering after that,” he said.

Stirling shared his family worried about his long-term health.

In fact, Stirling offered that it was his mother, Judy Stirling, to whom he credits with saving his life.

‘I think that saved me’

“She probably saved my life because she was the one saying, ‘you need to start taking IVs’ because I was sweating so much and I was like 20 pounds lighter than I am right now. I did not look good. I was a skeleton and I had nothing left. So she said, ‘please start getting IVs.’ And I did and I think that saved me.”

Stirling was tested “clear” on August 21st, but the battle wasn’t finished.

“I’m officially now over it, but I’m weakened. The battle with the virus has turned the corner with a negative test, but people still are a little bit afraid that they could die by shaking my hand.”

Stirling says he understands the fear, as he himself was impacted by what’s been called “long COVID.” “I didn’t even know long haul COVID or long COVID was a thing. Had no idea. I had the Delta variant and essentially you still have swelling of the brain afterwards. I think it was August 1st that I had my positive COVID test, so we’re talking August, and all September. It’s now October, and I’m still not feeling great,” he shared.

There’s no longer flu like symptoms, but he’s not himself at all.

“I’m just really weak, really down in energy, still a little bit of shortness of breath too. My smell was totally messed up. I used to love the smell of bacon and I could not stand the smell of bacon anymore. Couldn’t smell my coffee. So some neurological, long term stuff was happening with me,” he shared.

More medical visits, and Stirling was told these are things he may have to “live with” for a while.

“There’s no cure. It’s just time, rest, leading a healthy lifestyle and now everything is trending in the right direction.” Stirling says he’s back “in the game” and thrilled to have finally turned the corner.

“There’s a whole new season of Meetings with Remarkable People for 2022 in what will be my 20th year, so what an honour. I tried to count them up, all the shows I’ve done over the 20 years, but it’s definitely more than 350. That’s a conservative estimate, and I’m so honoured to have had (Pam Pardy) on the show talking about The Herald.”

Any top interview subjects, we ask. Mary Walsh, is up there, he admitted.

“I have a goal to interview all the Newfoundlanders who have been on 22 Minutes and I only have Rick Mercer – who very graciously wanted to do the show but the timing just didn’t work out this time around so I’m going to get him in April – left. Mary Walsh, who I finally had on the show this time around, was another one I had been trying to get, so it was a real honour to finally sit down with her and The Herald helped with that, so thank you.”

Sitting in The Herald office to chat leading up to the holidays, Stirling shared he felt “right at home.”

“The Herald, to me, is the premier, number one, most beloved Newfoundland brand. It’s a brand that goes back to 1946 that represents truth and justice and in a practical sense, a little something for everybody. So whether it’s ghost stories or crime stories or celebrity gossip, cartoons, comics or TV listings, there really is something for everyone in this magazine,” he said with pride.

And the longevity of the brand is something he’s proud of, he continued.

“We were talking about the amount of time The Herald spends in people’s homes. The amount of people that read each issue. How people proactively go out and buy it like a grocery store item. It’s up there with milk, bread, eggs. And my copy of The Herald.”

It stands for so much, he continued.

“It is a beloved Newfoundland brand and it stands for truth. I think it stand for integrity of reporting and to have a smaller, private, family run enterprise is so unique in today’s media landscape. It’s a real blessing to still have this magazine and have it be so beloved by our readers.”

Stirling offered that The Herald holds a special place in his heart. “I wouldn’t have had this conversation with anyone else. I’ll say that sincerely. And Newfoundlanders have been amazingly supportive to me my whole life, and I was actually reflecting on this the other night. The only successes I’ve ever really had in life outside of marriage and a daughter, all my professional successes have come from Newfoundland and it’s from the support of Newfoundlanders, so I owe this province everything,” he said with passion.

What’s next for Stirling? Let’s hope there’s no more dramatic tales to share, he said with a smile. “Let’s really hope that I’m not coming back next year with another near-death experience. I think a heart attack followed by a long COVID battle, that’s enough drama,” he laughed.

All Stirling wants is to live a good life, he added in reflection.

“For now, I’d just like to be a son and a husband and a dad and do whatever I can around the edges to help this Stirling enterprise of media companies go charge forward into the future.”