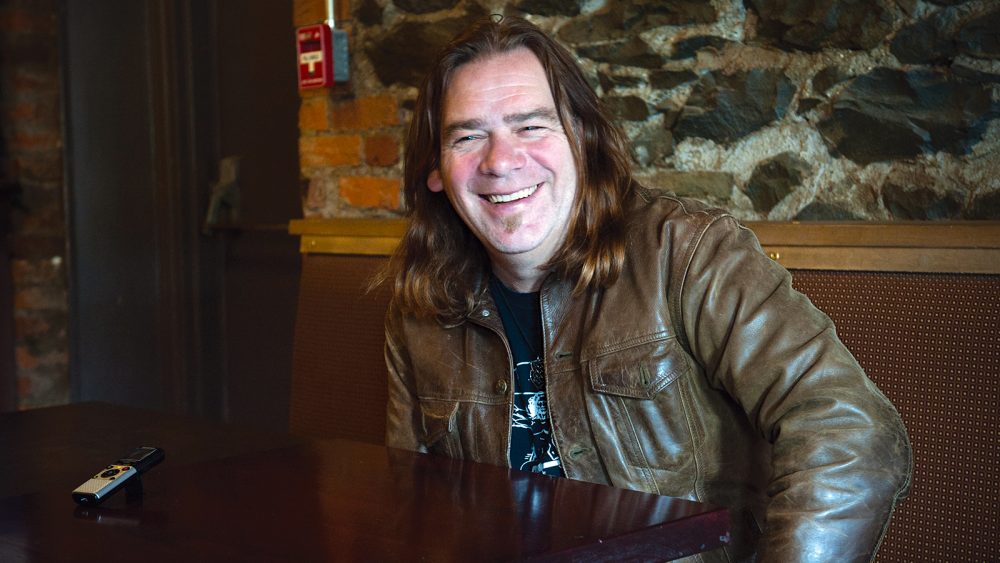 What does a traveller do when travel is impossible? You adapt.

That was the case for the worldly wonder that is Alan Doyle, who took to tackling a multitude of projects and challenges during the COVID-19 pandemic.

Now, with the hopeful light at the end of the tunnel creeping into view, Doyle is back with his merry crew to headline a night at the ever-growing Iceberg Alley Performance Tent this September.

We caught up with the incomparable singer-songwriter for an in-depth one-on-one with one of this island’s favourite sons.

Collins: Alan, always great to talk to you. You’re just getting back from your first proper tour since the advent of the pandemic. How does it feel getting back on the horse, so to speak?

Doyle: Yeah, it was really great to get everybody back together, and it was really excellent to be in front of people for really doing what I call non-virtual events. And I love it. I missed it a lot in ways I didn’t think I would. And it’s a big part of who I am, as it turned out. I’m grateful for the return to the stage and especially for a big home gig.

Collins: Is it the type of thing where it’s a don’t know what you got ‘till it’s gone situation? Obviously, you have so many interests, but being without the live performance aspect must have been challenging.

Doyle: Playing and singing in front of people and having people play and sing in front of you is an integral part of my life. And I think for a lot of Newfoundlanders and Labradorians, you know, we love to sing together. And I think we all miss that as much as I did, so we’re super looking forward to getting the world back into a normal routine of touring. And as I say, there’s nothing more special than a hometown gig.

Collins: Counting down to the Iceberg Alley Performance Tent. What does a hometown return gig mean to you now, particularly in the wake of COVID-19? It must have somewhat of a momentous feeling.

Doyle: It will be a little piece of history, won’t it? It’s really the first full capacity gig back with the full band since March 8th of 2020. It’s crazy. Who would have ever thought that would happen? That would be a momentous occasion, no matter where it was happening, but the fact that it’s happening at home is extra special and we’ll be pulling out all the stops, to say the least. I’ll be singing as loud and as hard as I can for as long as they’ll let me.

Collins: One of the standouts personally for Iceberg Alley has been the genre diversity, mixing up folk, hard rock, indie, classic rock, all in the same venue in the same month.

Doyle: Oh, no question. Iceberg Alley has very, very quickly become one of the premierm festivals in North America. It’s not even just a Canadian thing anymore. I mean, we’ve seen some of the biggest international acts playing there since it opened. And people are talking about it, bands are talking about it. They have heard that there’s this place in St. John’s where they’ve converted what could be a cool circus tent into an amazing concert venue. The venue itself is worth half the ticket. It’s so cool to go in there with the full floor and bleacher seats and a VIP section and a full concert stage and all that. It’s an incredible commitment to providing a great night out for people.

You can go in there and stand in a mosh pit in front of the stage if you want, and have a great time. You can lean up against the bar on the side and watch the gig like you’re in a club. You can also sit in basically a theater seat like you’re in the Arts and Culture Centre or if you want to buy a Skybox and drink fancy drinks brought to your table in a VIP section. It’s an incredibly diverse and versatile venue and it just gives the concertgoer almost any experience that they want.

You’ve always been an adaptable artist, whether it’s writing, acting, touring or whatever. How would you say you adapted to the downtime of the pandemic in terms of productivity?

I feel pretty good about the amount of stuff I got done, but also I feel good about the amount of personal time I had. Like last summer especially was like the first summer I ever had off since I was 12. I just kind of bummed around Newfoundland in the trailer with my wife and little fella and I loved it. There was some personal stuff that was very valuable like that. And then there were some professional stuff that would have never gotten done either at all or to the extent that it got developed without the pandemic.

And so there’s blessings in it, no doubt. But I have to say, I mean, I’d be lying to you if I didn’t say I found the last year and a half quite difficult. I didn’t get to do hardly any of the stuff that I like to do. Without sounding self-important or something, because my life is no more important than anybody else’s, but when you take someone like me and people like me who gig and gather and travel for a living, they can do a whole bunch of stuff, but you can’t gig or gather or travel. That’s a lot more for people like me to miss. There’s a lot of people I love that I usually spend 120 days a year with that I didn’t see at all. And you get to do this magical thing with them that you can only do with them. That’s not to mention, every night there’s a thousand or so people you’re sharing a special occasion with. There’s a lot to miss. And I got to say, I missed it.

Before we clue up, I have to pick the scab a bit. You’re a diehard Habs fan. Thoughts on their miracle run to the cup final. Hard on the nerves?

No sir! It was a glorious time to set up for the Stanley Cup next year (laughs). Quote me on that one. I loved it, I must say, I really loved it and I loved the run and the whole thing. You know, I thought they did great, especially for the team they had and how beat up they were. They were amazing and great fun to watch. I think even non-Habs fans in Canada begrudgingly cheered for them.

Alan, we know you’re a diehard music fan aside from being a career artist. Any nights at Iceberg Alley you’re marking on your calendar?

Jerry Douglas, John Hiatt man. That’s something else. And The Irish Descendants, I’d love to go see that one. You know, the original lineup, we played a lot with them, of course. Truth be told, Con and D’Arcy and that gang gave us our first gig. Our first Great Big Sea gig was opening for them. That paved a lot of roads for us on the mainland, so I’ll always be grateful to those guys. So cheers to them.