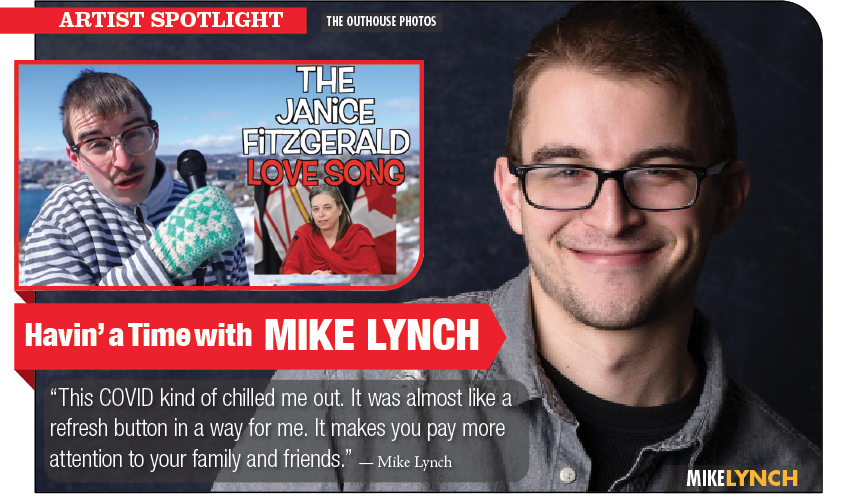 From flirtin’ to being told off in fine style, having a laugh with Mike Lynch is just what the doctor ordered to get us through pandemic times

“We’re all madly in love with you over at da Herald,” says I, as way of an opening when Mike Lynch gets on the phone.

“Oh, my God! That’s creepy, Pam, b’y. Shag off, will ya? I’m all about Doctor Janice now, right. Though first, it was Debbie Cooper, so I suppose – I’m single, so you could have a shot,” he opened. I cracked up.

“I s’pose there’ll be no story now. I shagged that up,” he added adorably.

“Honestly, thank you. I appreciate that. But really,  I am single,” he said.

If sketchy winks made a noise, I heard one through the phone line. What a flirt. What a charmer. Speaking of charming – if you haven’t seen the video Lynch and his crew created in honour of Doctor Janice Fitzgerald, then search it out. The musical parody is precious and then some.

How did it come about?

“Well, we always wanted to do another video with the character we did for the love song for Debbie (Cooper) when she retired and we never really had a good premise to bring him back,” he shared.

This “in love” character doesn’t have a name and Lynch tossed out a challenge.

“If any of your readers want to name him or come up with some names or something, then that’s perfect,” he offered.

Looks like a Morris to me. That’s this writer’s vote.

“I don’t even know what to call this guy, but I had the idea to do a love song for Janice Fitzgerald so we just started writing. I just started looking through some classic love songs that would be good enough for our Chief Medical Officer and then we just went and did it.”

The lyrics are hysterical. The video is as much cracked as it is brilliant.

Lynch laughed. “Yes, I like parodies. They are a good laugh and I felt like we had a lot to use because Janice’s has been in the media and has been just working so hard to keep us all on track and stuff like that. It just makes it way more fun if it’s something you care about and you have a lot there to work with. Janice Fitzgerald is loved for sure, but hopefully she didn’t find it all too creepy.”

This has been a crazy time for anybody in the arts. How has Lynch been handling life during a pandemic, we ask.

“I got to thank my parents a lot. I managed to come home from Alberta and was able to anchor down here and just being able to do videos and stuff and having another outlet saved me. My parents being supportive and everything is pretty much what helped me because you have to get off the stage. Doing these videos, and getting that instant feedback, helps. So yeah, thanks to my parents and thanks to Janice Fitzgerald for helping me survive this.”

Now that we are in Level Two, Lynch is prepared to head back on stage, bringing Show Mageddon to NL audiences across the province.

“Luckily Newfoundland is in a good spot where we could actually still play some shows, be half-capacity and whatnot. We had some planned and then the Level Five came out of nowhere and we had to postpone it all. And now we’re back on track and we’re already sold out.”

Lynch is full of praise for fellow comedians like his guest star, Paul Warford.

“Paul is such an original voice and he’s such a character himself and he’s just so naturally funny. I always say, ‘like, I suppose I’m funny,’ but Paul is naturally funny. I love being on the road with him  and you never know what’s going to come out of his mouth.”

We ask if he’s harassed going around Newfoundland. If folks get all fan girl/guy on him. He laughs. “I’ll go to the mall and not one person will come up to me,” he laughed.

Awwww. Sin, sure. He chuckles.

“Well, someone may call out, ‘deadly video,’ or something. People here are so down to earth. Newfoundlanders don’t fuss over everyone like you’re Justin Bieber or nothing. OK. I’m going to backpedal for a second. That may sound like a douchebag thing to say. ‘Look at me. I’m like the Justin Bieber of Newfoundland.’”

We laughed. “I’m just a fella playing dress-up on the Internet,” he added modestly.

I gushed over him for a little, mentioning a few of my favourite videos and sketches. From his skeet ones to his nanny ones – I loves them all.

“Keep your cool, Pam, b’y. Chill the frig out,” he said – and naturally, I cracked right up. Loves it!

We talk about a time in Alberta when he got a little “creepy” himself. Shanneyganock happened to be playing in the same venue as Lynch and he made sure he met da b’ys.

There’s an adorable picture of Lynch doing a late-night selfie with Mark Hiscock at the accordion player’s hotel room door.

Lynch laughed. “Yeah, that night was really fun. It was St. Patrick’s Day and I had two shows that night. I wanted to get tickets and sneak over in between shows and see them but I was told to just go back and meet them and they treated me like another one of their buddies, and we stayed up after the show and had a few beers and a laugh and Chris (Andrews) has become a really good friend of mine, and anytime we can have a laugh or I can have him in a video, I do it.  I loves saying, ‘shut up, Chris, b’y.’”

We ask if Lynch has a favourite character. “I guess I like doing the skeet the most. It’s just, growing up in St. John’s, everyone knows one,” he laughed.

It’s simply the one he likes to “break out” the most, he added.

“He’s the most fun one to do, the one you always break out at parties. I guess the area I grew up in, I saw characters like him growing up. So it’s just a lot of fun. But I love them all.”

Naturally, folks in this office love Cecil and his red Herald cap. Lynch laughed. “I got to try and take better care of it because the back is starting to kind of fall apart there. So I don’t know, I’m going to bring it into Tony the Taylor or something.”

We ask where the ideas come from. His response? “They come out of nowhere for the most part.”

He could be out at a shed party (like he just was, admitting to nursing a bit of a sore head) or out with a buddy or on a hike.

“An idea just comes and you write it down and you make a point to flesh it out later on and work it out. Me and Justin Hawco will kind of take turns on the writing and share ideas. Sorry. Am I sounding like a weirdo? Blame that shed party I told you about,” he laughed.

Did he bring the accordion along?  “Yeah. I really play it. Some people thought it was just in my act, but I really play and really love it and I was playing all this past weekend.”

I have to bring up his parents. Now that he’s back living home, his family residence is often the setting for the videos. What do they think of it all?

“They’re like, ‘Jesus, give it up!’ No. I’m kidding! They’re definitely my number one supporters for sure. Mom’s always very supportive and loving, though she’s always just constantly paranoid too. She’s terrified I’m going to do something either too bad or upset someone or, worst of all, show off the house in a mess.”

He continued joking about his mom’s greatest concern – a messy house in a video. “I got my camera and my lights and I just set them up and go and I’m not thinking that mom’s stove isn’t wiped down like she likes it,” he said.

We swing back to the video on Dr. J. How fun was it?

“We do a lot of Cecil, man. And I love it. But when you kind of do something a bit different than what your regular stuff is, you feel a little more rewarded because you kind of tried something new.”

The Doctor Janice video took “quite a while” to do.

From song selection, to writing, to recording, to the video and editing – it took “a long, long time,” he shared.

“Even though my vocals weren’t dynamite, I’m still kind of picky and I’m pretty particular. I’ll do a few takes and then I’m indecisive about certain parts.”

When he’s not being a creative genius, what’s he at?

“A bit of everything,” he shared. “I’m definitely not afraid of a good shed party. Because I like to keep things fresh I’m always kind of paranoid I’m going to run out of creativity, so I try and get out of the house, play accordion and have a few beers. I’m just a regular guy, you know?”

Before I know it, Lynch is interviewing me, and, when I sat down to write this, there was a huge chunk to cut. Smooth move, there, Mr. Lynch!

But for the most part, he’s good, he added. “This COVID kind of chilled me out. It was almost like a refresh button in a way for me. It makes you pay more attention to your family and friends. I got to move home, of course, which is nice.”

Any last message to Dr. Janice? The one who has made holding the shows possible now that we are in Level Two?