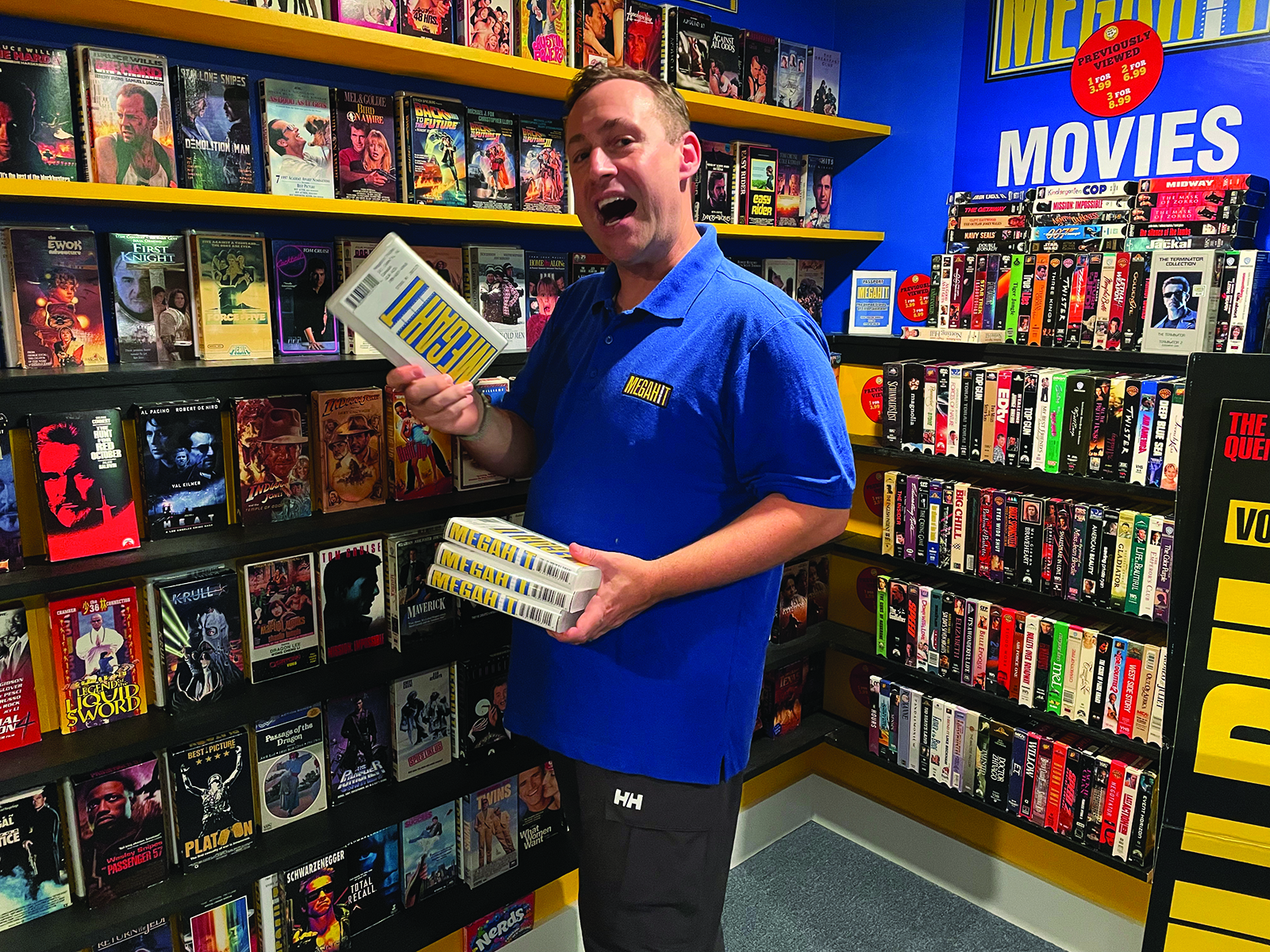 Corey Lynch admits that Megahit Video was created almost by accident. As all good yarns should, Lynch begins his with these endearing words; “Well, that’s a funny story….”

The VHS-store-within-a-basement concept happened as Lynch and his wife were renovating a wet-bar in their home.

“I had begun building this movie-themed bar and as I was showing people, all of a sudden everybody started eating up all this nostalgia. Many people want Montreal Canadiens or Bruins, things like that. I don’t like sports, but I do love movies. So I knew I wanted to have something that looked like an old video store. So we went from there,” he began.

Gum ball machine (free ‘rental’ with a black one, of course) popcorn popper and cardboard cutouts of mega stars – it’s all there – and Lynch, in his Megahit manager/employee shirt is there to greet enthusiastic “customers.” So, is it real?

“The fact is, while it began not real, it very much is real now. And we’re going to make every effort to turn it into something that people can enjoy online and hopefully come in person at times, although it is in my house,” he added with a chuckle.

Real store or not, what’s authentic are many of the movies, most taken from his own collection.

Looking to get some attention to his passion project, Lynch created his own version of a Herald cover, featuring himself, naturally! He laughed, sharing how his own father, after seeing it online, headed over to congratulate him.

“I did that absolutely with my meager Photoshop skills, but I really want to get the word out because of course, you need people participating for this to be fun. I can think of no more iconic symbol of making it in Newfoundland than getting on the cover of The Herald. So I thought if I made a fake one and put it out there – I mean, I thought it was very, very obviously fake, but my dad didn’t know. He showed up at the house and he looked at me and said, ‘Oh, you’re famous now! Got to get a copy of that Herald!’” 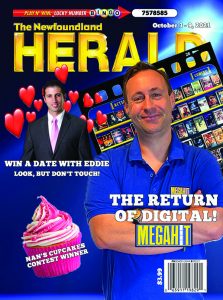 Telling his father the truth, Lynch added, was “heartbreaking.”

“The Newfoundland Herald is iconic. We’ve been reading it for years and I just thought it was a cute way to, again, make this as real as it can be, because ultimately I realize this is not a real VHS store, but it’s as real as anything anybody else has these days and we want to treat it as such. So we just wanted to get the word out and generate interest. And that Herald cover certainly worked because I got lots of attention.”

We ask if he’s surprised by the attention. Yes and no, he answered honestly.

“There’s a real sense of people trying to connect to their past and connect to almost better times. And everyone’s looking for that. It’s been a rough couple of years, so the more everybody started talking about how much the video store meant to them and the experience and the memories, it just started to grow. Of course, it goes beyond that. And I realized I was actually on to something and perhaps this could really, really create good feelings online and have people share this Friday night event and shake off some of the negative practices and replace them with a little nostalgia.”

Lynch’s wife is from Korea, and he shared that’s she’s been trying to understand the entire buzz he’s created. Just prior to our chat, she asked Lynch what it was about his posting of the mock Herald cover that generated so much interest in Megahit.

“I answered, ‘I don’t know how to tell you other than I always thought of it as the TV guide, but now it’s kind of like a social magazine about Newfoundland. It’s about the people who live here. It supports local.’ And she understood, and that’s the way I feel about The Herald. It’s been here for 75 years and I can’t think of anything that’s been as regularly produced as long that does so much for the community and I find that inspiring. Part of me thinks that’s what I want to be with Megahit – something where we can talk and share and have fun right in our homes. I have guests lined up to come out and talk about their past and their favourite movies and I want to be as much a part of the community as The Newfoundland Herald.”

We ask Lynch what his favourite movie is. “Oh, gosh. I will tell you the difference between best and favourite. I always like to say that my favourite movie of all time is Big Trouble in Little China. It’s a movie that I saw when I was younger and has been with me and I will watch it any time it is on.

“In terms of the best movie, that would be a hard one. I might say the best movie I’ve ever seen is John Carpenter’s original Halloween. I could talk about Halloween for an hour. I’m sure I watched it every day for a year when I was younger.”

Well, that’s terrifying, we tease. He laughed. “I’m having so much fun. After the last couple of years, building that sense of community now with Megahit, I can’t believe how excited it’s made me. Of course, I have a full time job so I’m as busy as anyone else, but this has created a lot of excitement and made me really want to help it grow and ultimately help create that community behind it that will then help Megahit run itself.” 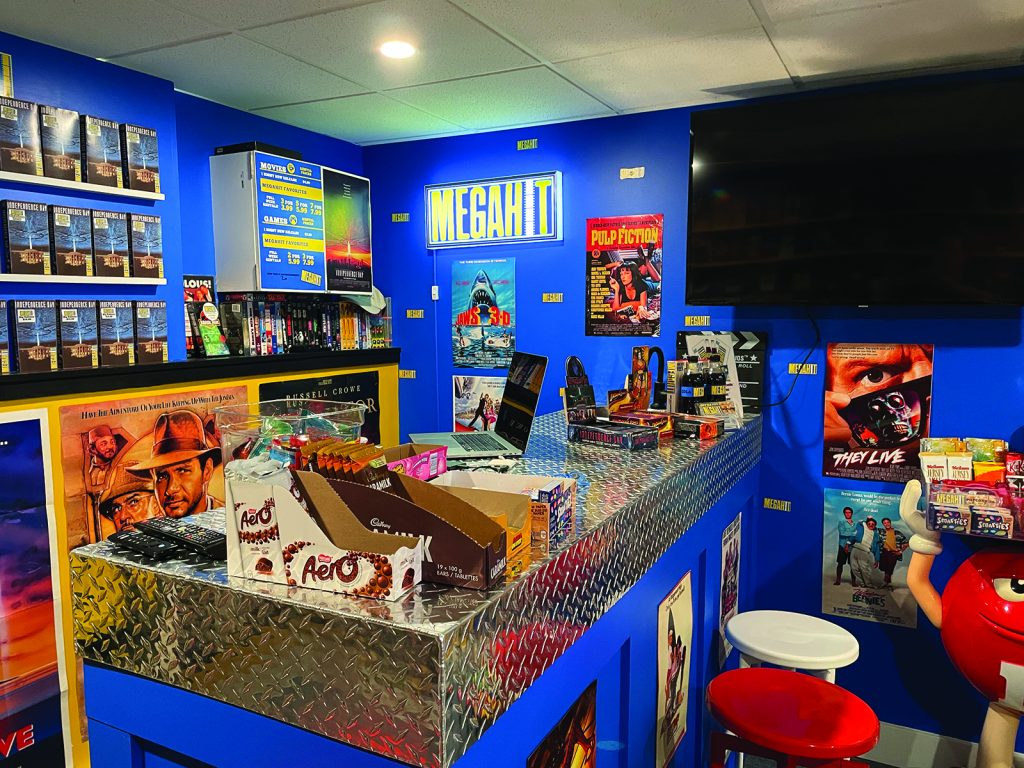 “That’s the thing that I’m most excited about now. At the beginning I thought, ‘well, it’s just me’ but now I notice people are starting to tag their friends or looking at Batman vs. Superman and then adding their comment to something else that someone has posted about a movie they love or don’t love. And that’s really what I want to build. I just want to be in the spirit of community and fun going forward. So the excitement is real. And when anybody asks, this is very, very real.”

What’s next for Megahit?

“What we want to do is have fun. Of course, this is our house and my wife reminds me we are not going to run an actual store from the house, but I think there’s every opportunity to invite local people over once in a while to have a look, because I will tell you, we were shooting a fake commercial yesterday – like a vintage video store commercial, essentially. The excitement around that from everybody in the room was palpable.”

Back in the day, everyone of a certain age recalls heading to their neighbourhood video store to grab their VHS movie for the night or the weekend. “People get a little upset that they actually didn’t have VHS players, although I do have extra if anyone needs one.”

‘The Place to Be’

This whole experience has been extra special for Lynch for a few reasons, not least of all because he used to work at Blockbuster Video back in the day.

“This is an authentic experience because I worked at Blockbuster Video. When you worked at Blockbuster Video on Friday nights, it was the place to be. There was a buzz. There was an excitement. If you wanted a certain movie and it wasn’t there, we’d check the return box for you. Sometimes we found it and even taking home a bad movie, you still watched it because that’s the movie you had. But ultimately the experience of going to the shop and picking up your snacks and then going home together with your friends, your family. That’s what I’m going for.”

Creating Megahit for others to enjoy has brought back all those warm and fuzzy feelings. “I hadn’t expected it to feel like that. It’s been a little emotional because it really does feel like the video store used to feel. And that got me really excited.”