Proudly waving the flag of traditional Newfoundland trad music with an edge, the Derina Harvey Band tackle weighty themes on their newest material

You can take the woman away from The Rock, but you can’t take The Rock away from the woman.

Derina Harvey, and her bring-the-house down band of merry travellers – drummer Steve Pinsent, guitarist Scott Greene, bassist Ed Smith and fiddler Jessica Blenis – are the embodiment of that philosophy.

Made up largely of expats of Newfoundland and Labrador, and harnessing a sound reminiscent of a young Great Big Sea with extra bite, the raucously entertaining Alberta-based outfit has blown the roof off of venues across North America, promoting a tried and true brand of trad music with a modern kick overflowing with pride.

“We totally look up to the original writers, the folks who really brought the culture of Newfoundland into song,” shared Harvey in a one-on-one with The Herald.

“Great Big Sea, The Punters, The Fables, The Navigators, Shanneyganock, they are gatekeepers of that traditional music and also married in the music of the time. So what we feel is appropriate for us is to have the song be represented well. If that means that I need to growl a bit because that’s what the emotion is in the song then I’m going to growl a little bit. If it needs a big dirty guitar solo, then that’s what’s going to happen next. Big loud boom and drums? Perfect. And I still want to have those beautiful harmonies coming through.” 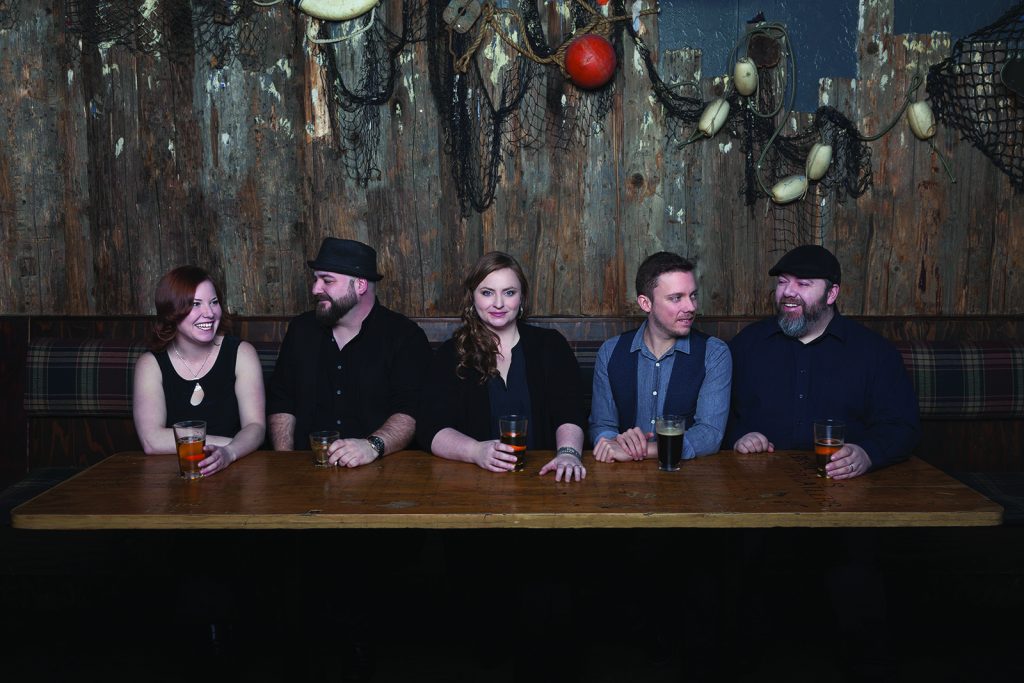 The Derina Harvey Band made a much-welcomed return to Newfoundland and Labrador this past summer with a series of engagements across the Avalon, a long-awaited home-coming only made sweeter due in no small part to the restrictions of the global pandemic.

“To have a couple of years in between seeing our friends and family, it was difficult, as many other folks I’m sure can relate to. Having the opportunity to get home and reconnect with family, that’s first and foremost, of course. And then the icing on the cake, to be able to share a bit of music down on George Street and out in Harbour Grace and see friends through music that we haven’t seen in a long time and even make a few new friends is delightful. It’s absolutely wicked.”

The band hasn’t exactly taken the COVID-19 pandemic lying down, engaging with their fan base through social media, performing various digital performances, and setting to work on new material, including the emotional and serene single Grow.

‘Back in the Studio’

“The Grow video was something that we were delighted to be able to put forth. New music? Absolutely. Getting back in the studio for that brief period where we were able to do that was just so energizing for us. After kind of being a little bit removed from each other, being able to be in a space and share that music together, it was a change, and you know what they say – a change is as good as a rest. So we’ve had our rest and now we need to get back into that creative mode,” Harvey shared, diving into the eye-popping video created by her acclaimed artist mother, Sheilagh Harvey.

Describing the single and accompanying video as a family effort, Grow aims to shed light on the beauty and tranquility of Newfoundland and Labrador’s wildlife, while also serving as a beacon for positive conversation surrounding mental health.

“We wanted to make sure that we were able to not only highlight the beautiful landscape of Newfoundland and Labrador, the wildlife, but we wanted to also kind of nod our head to the fact that we have been through hard times before. With the song Grow, I know that being from Labrador, being outdoors was part of my self-care as a young person growing up in Labrador. When the mines would shut down and things would get difficult, you’d spend some time to yourself, just down under the trees and try and figure out a few things, try and just contemplate the world and what’s happening next. And so that’s where I find my peace. I have to go outdoors and get under a tree,” Harvey recalls.

“But I spent a lot of time in the summers visiting the island of Newfoundland, where I have a lot of family and friends. I would watch these little boats going out and little boats coming back in. And I made up a little story in my head about what these boats represented and how they would interact with the water and the land. And then when I was about 14 there were no more little boats in the water. They were all on the beaches and they were overturned. And I didn’t understand exactly the full ramifications of the moratorium, but I could see over time that the strength of the people was building and our abilities to broaden our opportunities, looking for ways to overcome this difficult period,” she added reflectively. 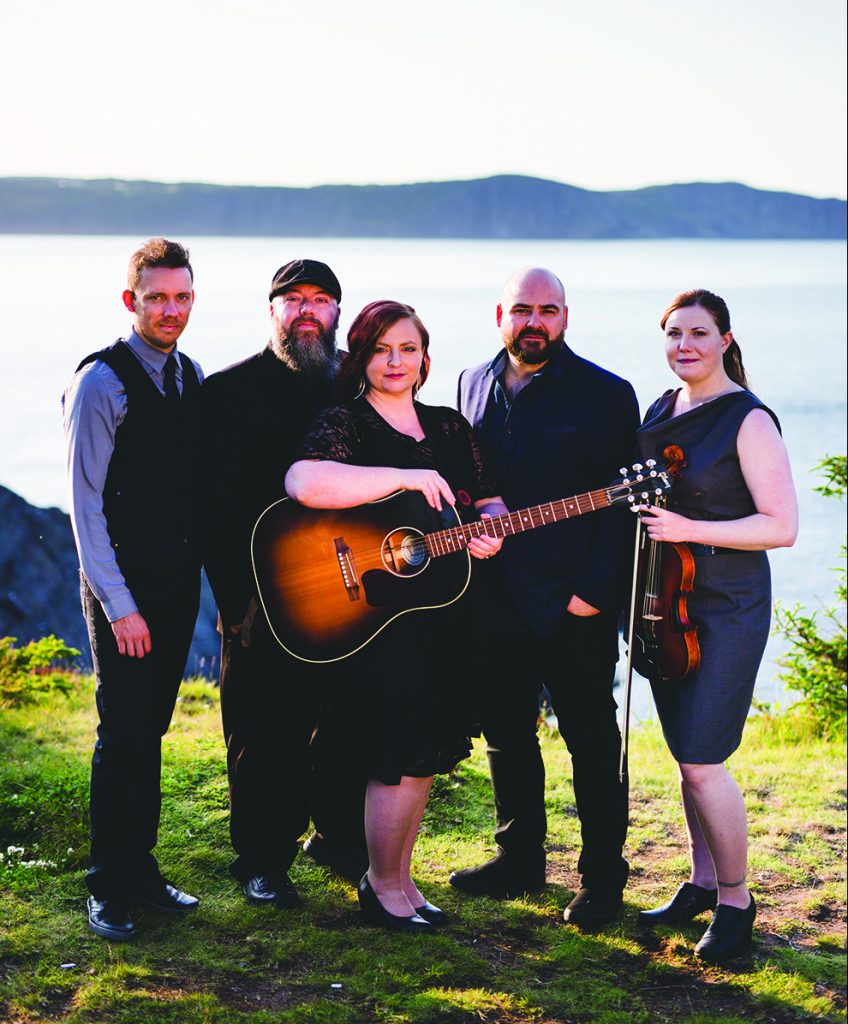 “We were able to use our strength to find light in those dark and troubled times. So that’s what I kind of wanted to bring forward with this song, is that, yes, we can find a way to navigate this together. And at the end of the song we have a crisis number for those who are looking for maybe a little bit of advice or maybe find a new program to help them through whatever might be causing them some mental anguish at this point. We really wanted to reduce the stigma associated with mental health issues and just point a little light towards the helpful programs that are in place for folks.”

Explaining that the band is well into the process of a new studio album – with past successes The Fallen Man’s Daughter, Up All Night, Rove and Go serving as steps in the road to a more introspective, yet decidedly confident future for the Derina Harvey Band.

“We’ve been writing bits in dribs and drabs and then going full bore with things. And then, of course, the pandemic kind of slowed things down a little bit. And I think my songwriting style changed a little bit. I think through the pandemic it became a little bit more introspective, I suppose,” Harvey shared candidly.

“The Fallen Man’s Daughter was written about a tragedy and one that was perhaps too sadly something that is familiar to very many folks out there. And then Up All Night is more of a party song for sure. Rove and Go was definitely something that was trying to capture a moment of the past through resettlement, which is still happening today. But with the last few songs that we’ve been working on, there’s definitely a leaning towards mental wellness, I think is kind of the underlying theme. So we were just trying to make sure that what we’re going to be putting forward has a theme throughout the album. We’re kind of looking at the songs that are written and trying to choose which ones through a demoing process will be on the next album. But we’ve got some fun songs coming out.”

For more on the Derina Harvey Band visit their social medias and derinaharvey.com