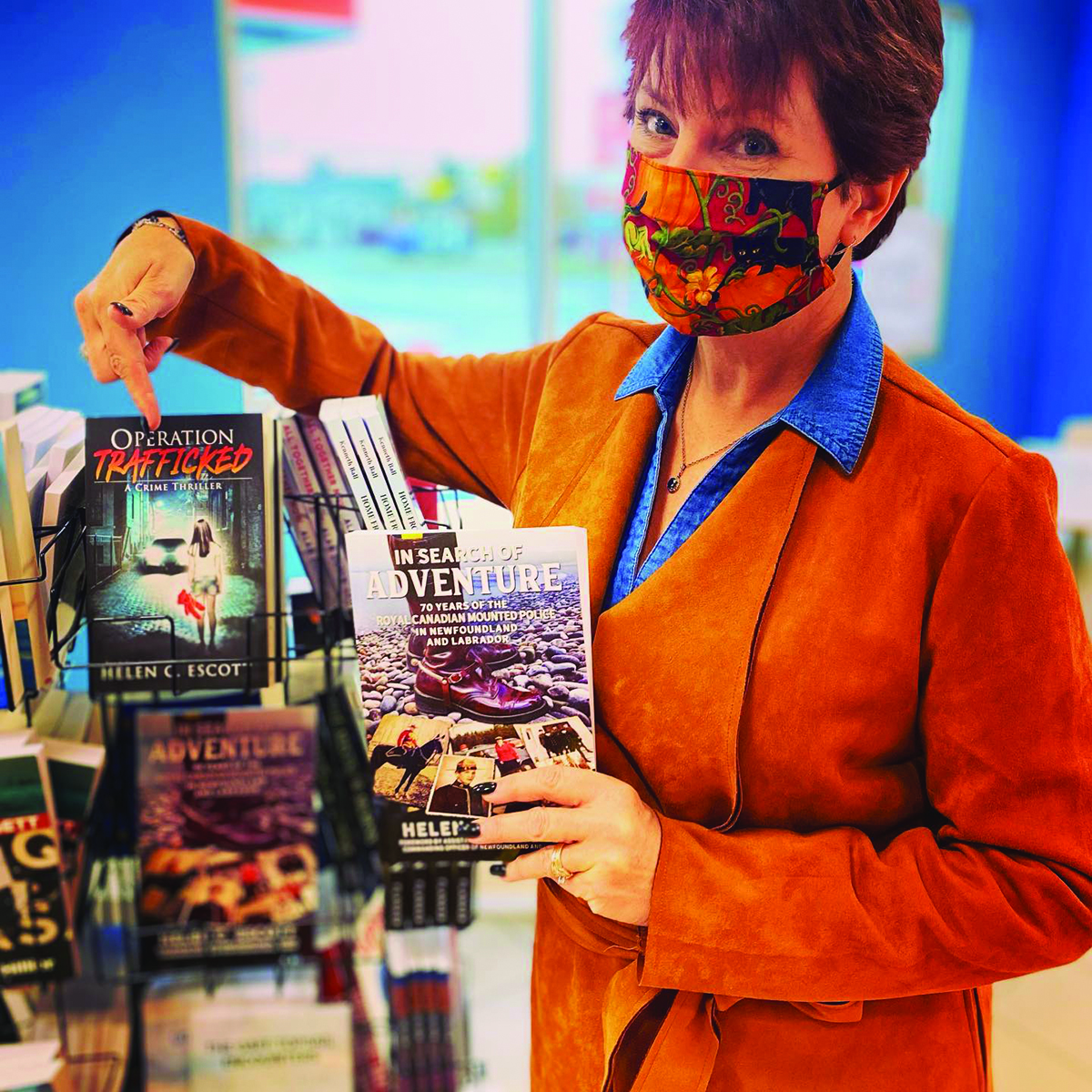 Bestselling award-winning crime author Helen C. Escott gets real about where her passion  for writing comes from

The book Operation Trafficked, fourth in the ‘Operation’ series, is getting lots of attention. In fact, it’s the first book Costco picked up from Newfoundland for sale in their Atlantic region.

What is her latest about?

“Operation Trafficked is about human trafficking and slavery. People tend to think of slavery from something 100 years ago, and they’re not really aware that slavery happens right now. It’s happening right here in St. John’s and in Goose Bay and there are women forced to be in the sex industry and forced to service men,” she began powerfully.

“Human trafficking is a crime against humanity. Some may look at these girls and go, ‘but it’s her choice. She wants to be there,’ but any industry that normalizes the selling and slavery of women does not empower women. And it’s not the oldest profession. That statement inflames me. No, it’s not. It’s the oldest form of oppression. No woman chooses to grow up to be a prostitute. They are forced into it either through poverty, through abuse, through drug abuse, through mental illness or intimidation by a partner.”

Working on a corner

Escott, who worked in policing, is nothing if not informed.

Escott has spoken up before about her PTSD, a tragic side-effort of her work with the police force, yet the topics she writes about are so raw. How does she do it, we ask?

You can take a pill and sit on the sofa all day, but when that pill wears off, you will still be left with nightmares, she added.

“You’re still going to have the trauma, you’re still going to have all that stuff you carry around with you. The pill is not going to cure it. The only way to cure PTSD is to get off the couch, go for a walk, do something creative, be social – no matter how small it is – even if it’s just meeting someone for lunch. I force myself to go outside my comfort zone to write and that’s how I dealt with my PTSD and everybody’s different.”

And that’s where her writing comes in handy, she added.

“When I go to this dark place, that’s a familiar place for me. Going to a dark place is not hard. It’s home. That’s where I feel my comfort zone. Sometimes I find it hard to get out of the dark place because I get so involved with these investigations that they almost become real to me. And my characters are real to me, and I talk out loud to my characters all the time and we have conversations because I’m not one of these authors who can know how the book ends. I have to let my characters play it out, and I’ll just follow them through.”

There’s times that she stays up all night writing, she added, and when she reads her words in the morning, it’s almost as if she didn’t do the writing.

Besides her writing, she’s also known as a bit of a comedian and as a fashionista. Where does the light come from?

“You have to have balance. Look at somebody like Robin Williams, who was brilliantly funny but also suffered from major depression and eventually died by suicide. That’s not uncommon.

“Most of the funny people I know, the creative people I know, do suffer from some type of depression or anxiety or PTSD. I say I don’t suffer from PTSD, instead I almost enjoy my PTSD sometimes because it makes me creative. It’s that old saying, ‘sometimes I fight with my demons all day and other days I lay down and snuggle with them.’ And that’s the truth of it – that you just kind of go with it.”

She reminds all that social media is not real, that it’s all smoke and mirrors.

“If you follow me online, I am the hardest working woman in entertainment, because you’ve got to keep the image going. I don’t need sympathy for my depression. I don’t think that helps you. I think what helps you is getting up, making your bed, getting showered, getting dressed, going for a walk and being there for your family.”

Always open and real, Escott added that she doesn’t want to pass her illness on to her children.

“I don’t want them to be have vicarious PTSD like I had from my mother. My mother dealt with a lot of trauma from my father who served in World War II and came back. Back then they called it shell shock, and now they call it PTSD. But back then you were told, ‘Be a man, go home, have a drink, deal with it, forget about it.’ And that’s what they were sent home to do. Of course, that’s not what happened. My father had severe anxiety and depression and PTSD from serving in war and so my mother had vicarious PTSD from dealing with him.”

Escott shared that as a child, she grew up “walking on eggshells constantly.”

“It was ‘don’t upset your father’ and don’t say this and don’t do that. I grew up in a family where Dad has been a sailor who served in the Royal British Navy and came back from World War II with PTSD. Then, of course, I go into a career in policing. You’ve got to remember – children who are raised in chaos become chaotic. People say to those who suffer from PTSD or who were brought up in chaos; ‘why don’t you just stop? Why don’t you just change it? Don’t you want a normal home?’ Yes, I do want a normal home. But what’s a normal home? The only normal home I know is a chaotic home. So if the home is chaotic, then it’s familiar to me. A peaceful home?  I don’t know what to do there. So I had to relearn everything.”

And that brings Escott full-circle back to her latest literary creation, Operation Trafficked. “My PTSD comes out in my writing. It comes from outrage. When I’m outraged, I write books about things I’m outraged about. You can go on Kijiji right now and order a girl to your room quicker than a pizza and that outrages me, and so I wrote about it.”