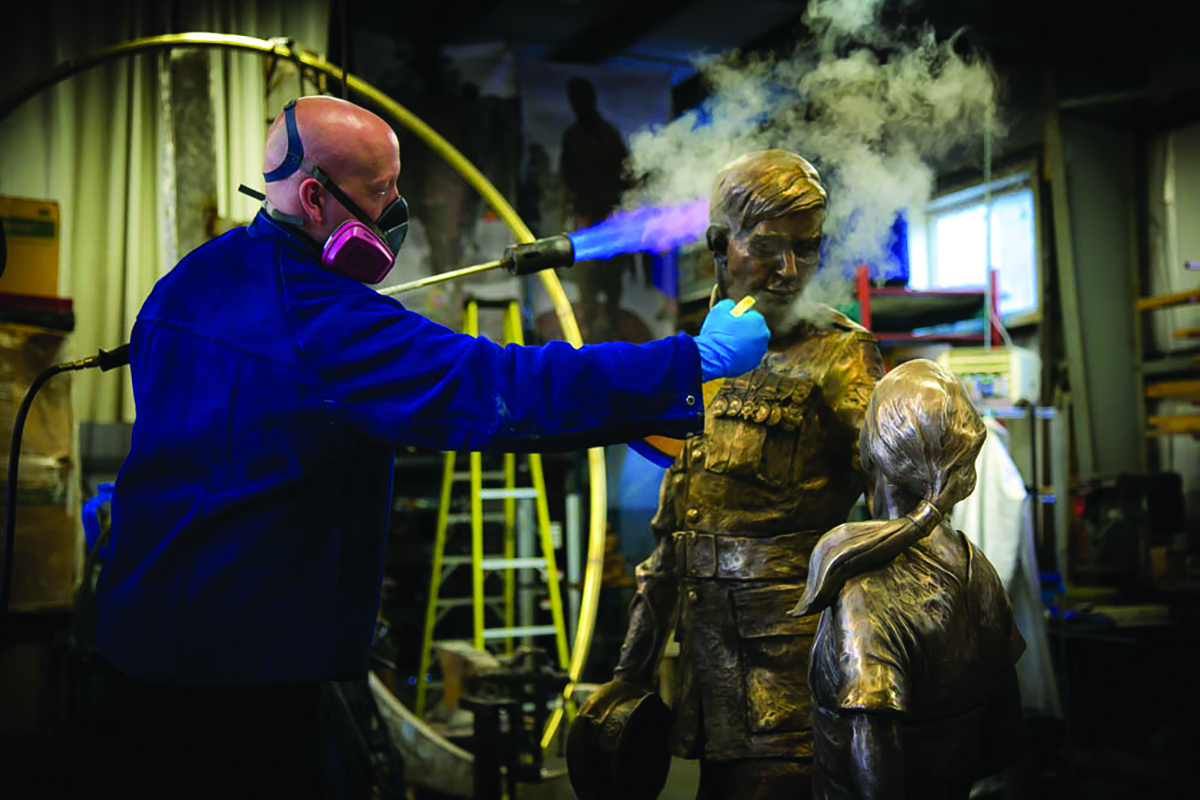 Sculptor Morgan MacDonald is inspired to create for so many reasons. In this touching,

reflective feature, MacDonald shared the incredibly personal reasons behind why his

professional and creative endeavours have blossomed the way they have

Meeting Newfoundland’s preeminent sculptor Morgan MacDonald in person is quite a treat, especially when it’s at the unveiling of one of his brilliant and touching creations.

The statue, depicting a child holding a ball of wool while Nan knits in a rocking chair passing down a long-held Newfoundland and Labrador tradition, is captivating. But then MacDonald is well known for his large monumental bronze works and sculptural interpretations of history and culture.

An award winning artist – the recipient of the Memorial University 2016 Horizon Awards for outstanding achievement under the age of 35 –  MacDonald works alongside his artistic team creating from a foundry and studio in Logy Bay. As is on display at Government House, his works are highly realistic and technical in nature with an emphasis on expressive human qualities and captivating realism.

As a student enrolled in the Fine Arts Program at Sir Wilfred Grenfell College, MacDonald was first introduced to the ancient practice of lost wax casting. It was while studying Business at Memorial University that he began developing the idea of his first major work titled “The Rower” which has become a local icon for the City of St. John’s.

MacDonald’s works can be found in collections as far away as Europe and throughout North America and have been unveiled by notable dignitaries including The Prince of Wales, The Princess Royal Anne, former Prime Minister Stephen Harper and other heads of state. Other prominent works of his include The Memorial to the three fallen RCMP officers in Moncton, the Sealers Memorial in Elliston, “A Time” located on George Street in St. John’s, Corner Brook’s Remembrance Square and The Conception Bay South Monument of Honour.

When we spoke to MacDonald we ask where his motivation comes from.

“It’s amazing how much you learn about history with every project that you do. Like with NONIA, I had always thought it was a knitting outlet and a place for traditional Newfoundland goods, but it’s so much more than that. It had its founding over 100 years ago and the whole idea was to provide extra income for nursing and health care services in the outports,” he began.

Being involved with something with so much history, and knowing the statue would be located on the grounds of Government House, also enticed him, he added truthfully.

“We ultimately decided what a wonderful image would be – a grandmother passing on the traditions and the knowledge of knitting to her granddaughter. And it’s one of these iconic scenes that most Newfoundlanders of a certain age would be familiar with – the grandmother sitting in a chair, passing time knitting.”

It’s a huge honour to have something on the Government House grounds, he added, and it’s the first bronze statue located there.

MacDonald reflected on the pieces he’s done that commemorate this province’s sacrifice during war times.

“We’re past the time when we were commemorating the 100th anniversary of Newfoundland and the First World War, but I came to that subject matter in my artwork because of my great grandfather, Joseph Babstock, who fought with the Regiment (Royal Newfoundland Regiment). He was captured as a POW at Masnieres in France at the battle of Cambrai. I never really had a chance to meet him and I only really knew him through my great grandmother, who lived to be 102.”

MacDonald felt a powerful need to know more, he added.

“It was just this generational thing, this need to discover your family history and like a lot of Newfoundlanders, the amount of respect and reverence that we hold for that generation and the history and the terrible tragedy of it all and how it just became a pertinent subject matter to commemorate.”

The caribou was something that stayed with him, a very powerful image of what so many fought for.

“The Caribou is one of these iconic pieces that most Newfoundlanders are familiar with and they know what it stands for. And we try to create something in memory of these men who gave so much.”

MacDonald said he hopes to commemorate all those in uniform through his works.

“The one in CBS, it’s a focal point for the community. It was a huge undertaking, but I’ve just been really fortunate to be able to work with veterans to do the things I do. It’s an amazing honor to be part of something that will stand as a monument and a testament to those that served.”

There’s so much emotion. “I have to pinch myself sometimes because it’s an incredible honour to do these tributes for veterans and to have these statues around the province. It’s almost surreal when you think about it,  that there’s these places that people can go and really connect with our past, and our present.”

Of course, the work that goes into these pieces is unbelievable.

“Unless you visit the Foundry, you don’t really have a concept of how these things are made. You get the odd person that thinks these are dipped in bronze or they’re hammered out of metal,” he said.

It’s actually quite a process, he explained.

“It’s quite an involved process. It’s a practice that’s literally centuries old. A statue can take 12 to 14 months of work and when you put it out, it’s almost impossible to explain this verbally. It’s more of a visual explanation because there’s so many steps involved in melting and pouring the thousands of pounds of bronze, and that’s dangerous and dirty work. I mean, you’re talking 2,000 degrees Fahrenheit.”

It’s also an expensive endeavour, he added. Materials alone make the process costly, but it’s the time and the labour that really add up.

“You’re talking thousands upon thousands of hours just to create these pieces. And then when people see the finished work, it’s hard to conceptualize the amount of time that has gone into these things. Every square inch of a piece has been hours and hours of work just to create each aspect of it. There’s nothing by accident on any piece. There’s skill and dedication that goes into making these pieces.”

How did this passion begin, we ask?

“I’m often asked that and I struggle with it because it’s one of these things that kind of gets to the core of who you are. It’s like, ‘why? Why is it that you do the things that you do? And how did you find your path in life?’ And I guess it’s probably a bit of fate, and maybe determinism.”

There’s so much involved in what got him to where he is today, he added.

“There’s also an aspect of choice and discovering that you have an ability to do these things and … it was just a serendipitous thing, a class that I took many years ago. Then encouragement from my parents to learn about this. And it was just one of these things that I thought, it’s just not a hobby or an extracurricular activity that you’ve participated in.”

His determination certainly helped, he added. “Maybe I’m a bit naive, too, and stubborn. I just thought I could go and make a career path with this and I’ve been very fortunate. Upon reflection, it’s probably more just stubbornness and being incredibly naive that led me on this path so I can make a living at this.”

There’s a running joke at the Foundry, he added, and it comes up every time he begins a new project.

“It’s so much work and so much time and effort and dirt and dust and power tools and heavy lifting. And I go, ‘I should have been a painter.’”

Making a living from the arts isn’t for the faint of heart.

“It’s kind of the holy grail of trying to become a professional artist and it’s just incredibly difficult. And most people end up in a different career path because it’s almost impossible to make ends meet in this kind of career.”

But, something keeps MacDonald creating. What is that something?

“It’s a little bit of everything, but knowing there’s things that I have created out there that provides some history or some context or preserves a bit of our culture, or offers comfort and peace and reflection? I guess that’s why.”

For more on the Newfoundland Bronze Foundry and the process of creating sculptures can visit www.newfoundlandbronze.ca or TheArtOfMorganMacDonald.com