Dating has changed. For men and women in their 40s and older, it’s a whole new world. One local woman uses her experiences to help others who are single mingle with class and fun

Violet Browne is every inch the hostess with the most-est as she greets her nervous though excited guests at her signature event. 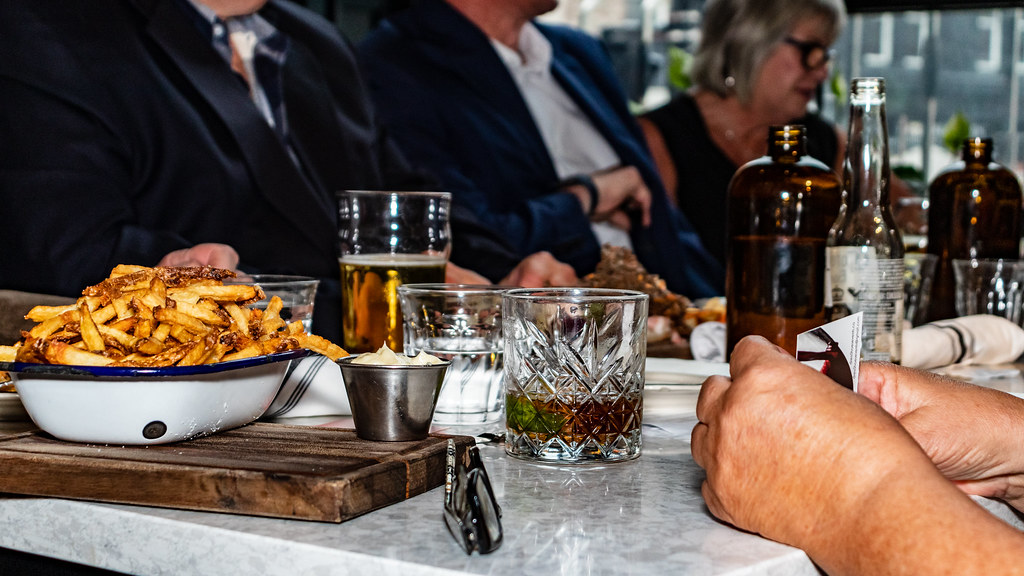 Click above for the full event gallery | Photos by Michael Chubbs

Held downtown at the Merchant Tavern, Browne focuses on fun and comfort in the private room in the back. Introductions. Ice breakers. She knows what’s required because she’s been there and has the fancy red shoes at the ready to prove it.

“I started the company because I saw the need. I’m a single person myself, and said, ‘I’d really like to have something that works for people 40-plus. Some way that you could actually get together in person as a group and have fun things to do,” she opened.

The first event, a three-course meal at The Merchant Tavern, was a success. With conversation-starter cards laid about the tables – with everything from soul mate discussions to the belief in the supernatural available to be debated – the ice was broken and the conversations flowed.

Were there matches? Oh yes! The event was such a hit, the next one for August is planned – a boat tour with Iceberg Quest Ocean Tours.

Browne is excited to take dating off online and get it back to meaningful face-to-face encounters. With a model that mixes monthly subscription with pay-per-adventure, it’s one she hopes will change things for anyone seriously looking for their match.

Browne says she’s happy to play cupid, and she’s set up what she calls a Matchbox to help connect subscribers between planned events.

“What I’m aiming for is planning a way to get out and have fun. It’s really about actual togetherness. Connecting people in person and it’s about getting back to having those kinds of relationships and engagements where you’re actually meeting in person and it’s not just for a coffee,” she said.

Dating isn’t easy, she continued. She’d like to make it a little easier if she can, she added with a smile.
“People get disillusioned because dating becomes routine. It’s easy to fall into just kind of having that chat and not taking it one step further. With online dating, you’re not sure who is who. With these events, it’s a safer environment and it doesn’t put the same kind of pressure on anyone. Everyone is just there to relax and enjoy themselves.”

With one down and the next one planned, Browne is excited to see more and more matches as time goes on.
“This is going back to doing it the way we did it the first time we dated when it was face-to-face. We’re the first generation who’s dated through the decades so we need to have something that really works for us and I’m proud to be part of what I feel is that answer.”