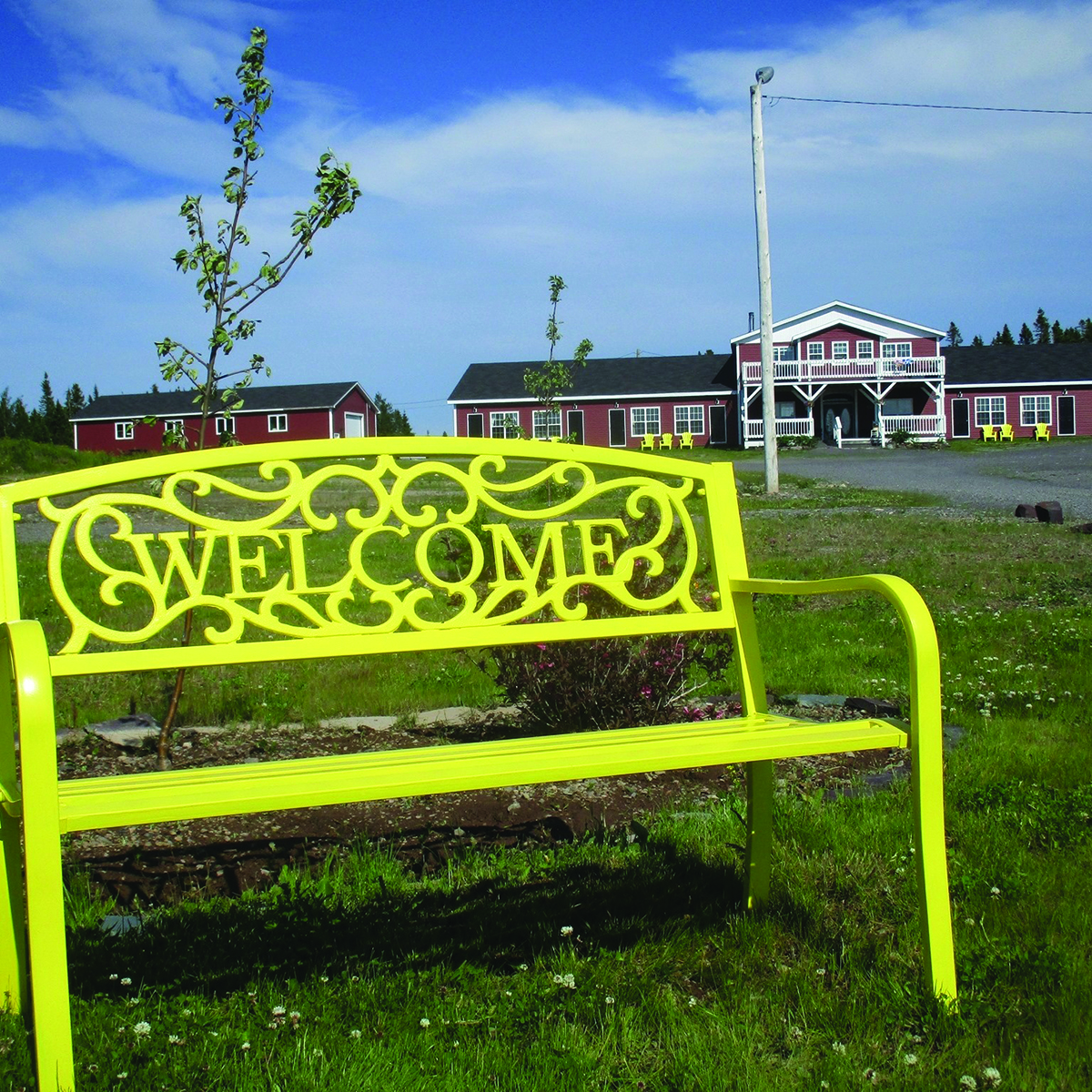 Those dedicated to the tourism industry in NL tirelessly showcase the best this province has to offer, and all are worthy of one enthusiastic standing ovation

One thing has stood out above all others: those who work in the tourism industry dedicate their soul to the art of hosting others. From serving a cup of tea to fluffing a pillow to tickling our funny bones, these treasures of tourism deserve a shout out.

Donna Butt is recognizable in voice and in stance. On the day we visit Trinity, Butt stood proud as a peacock in a sea of tourists almost as enthusiastic as she was about the historic village and its place in this province. From shops selling the most unique products (stock up for Christmas opportunities galore!) to the wide array of edible and entertainment possibilities, Trinity is a head turner and no one knows that better than Butt herself. “Isn’t this lovely?” she gushed after a warm hug of a greeting.

“Trinity is just so special. It has history and heritage and you can tell just by looking around that the people here really care about the place they call home,” she said.

She’s right. As perhaps 50 tourists mill about outside the prominent building that’s home to Rising Tide, tour buses continue to load and unload those hankering for a bit of outport history and hospitality. Butt and her team provide all of that and then some on their walking tours. But of course theatre – from short skits to more elaborate pageants – is what drives this diva of the dinner theatre.

Shenanigans, which features the whole cast, is an opportunity to have a feed of fish while being entertained by the best of the best when it comes to live theatre on the edge of the Atlantic. From Out of It  and Salt Water Moon, to the moving No Man’s Land, Rising Tide and their shining stars make a visit to Trinity tops for any tourist.

Karen and Chris Ricketts buzz around Bella’s restaurant at Round Da Bay Inn in Plate Cove West. These two know everyone it seems, and if they don’t, they quickly remedy that with a smile and a kind word.

When we finally sit down to chat, it’s near overwhelming. Covering in written word what this passionate, powerhouse of a couple have accomplished is quite the undertaking. First, it’s the inn itself. With themed rooms all with unique and distinct personalities, it’s worth a visit just to tour the premises. From movie stars to relics from Nan’s attic to finds from Pop’s old fishing shed, Round Da Bay Inn is a piece of art – or better yet, a masterpiece. But there’s so much going on. The Ricketts started the Welcome Home Project (New Beginnings on Facebook to contribute or follow their progress), for one thing.

“We have three refugee families we’re sponsoring. We’re renovating a house with an apartment upstairs for a family and a downstairs unit that can operate as a business,” Karen explained.

There’s many fundraising efforts going on in support of Welcome Home, and one involves a man named Charlie who has captivated and captured the hearts of all he encounters. On the day we visit Round Da Bay Inn, Charlie Comrie, a 96 year old Second World War vet who moved to Plate Cove West from southern Ontario last December, is engaged in a lively breakfast conversation with some guests at Bella’s.

While Charlie isn’t sipping from a coffee mug featuring his own mug that boasts: I Know Charlie on it (funds raised from mug sales support Welcome Home) he is singing the praises of the Ricketts for all the work they do.

The Ricketts equally sing the praises of Charlie. At 96, he runs errands and takes care of his own home as well as lends a hand to help with renovations in whatever way he can.

Charlie’s presence is a present, Karen and Chris share. “We got to know Charlie and his wife Anna from many visits to Newfoundland from Ontario. We kept in touch through the years. Christmas cards, then phone calls started and the friendship grew,” Karen said. On one visit Charlie mentioned he didn’t want to leave.

“When he was here last year he said, ‘I don’t think I’m going to go back (to Ontario) after all, I think I’d like to live here.‘ Well, we helped him find a house and he was here by Dec. 21st just in time for Christmas,” she said.

We ask Chris (who is also renovating a recently purchased church) how the idea of the themed inn rooms started. Basically, they just had “stuff” they needed to use, he said with a laugh. “We bought a house full of antique furniture for a summer house or retirement home or whatever it was going to be, and at the same time we had bought this inn,” he said.

Karen laughed, adding that things just “snowballed” after that. “Karen woke this night and said, ‘what if we did one of the rooms up like Nan’s attic? We can use some of the antiques in that and it would be different.’ And that was the first one,” he said with an almost sly smile. Karen laughed as Chris continued the yarn.

We ask if they have a favourite room. The Seaside Retreat is Karen’s because it’s “so light and airy, and blue and pretty.” Chris has a fav too. Bayman’s Cove.

“Meet your neighbours in Bayman’s Cove.  Gaze in through the ‘windows’ to see depictions of outport life and imagine the stories ol’ skipper could tell! Live your Newfoundland outport vacation,’ the room’s write up says.

It’s like a little piece of heaven on earth, we say as we tour the rooms. Chris laughs.

“You know, it really is. We didn’t realize at the time what this place would end up meaning for us or for others, but  we’re really glad we get to have a little fun and we try to not take ourselves too seriously while still having other people who come here really enjoy themselves.”

There’s so much more to share when it comes to Karen and Chris so tune into future editions of your NL Herald!

Jordan and Jen Chubb know that it takes a village to accomplish many things worthwhile in this life – like raising a child – but they also found out how important that is when it comes to being involved in the tourism business. How did this young couple end up owning a rental property on the edge of the ocean in Chance Cove? By chance, of course!

“We just saw the house and we saw the view from the pictures and we said ‘Let’s go see the house,’” Jen said. They loved it instantly and bought it. Then, the renovations began. “It needed lots of work but we said, ‘You know what, we can make a go of this place.’ So we ended up buying it and renovated it from top to bottom. And here we are three years later,” she said.

One thing that required no reno was the sound of the ocean right outside the door. Jen beamed.

“You are in there in the bedroom and the waves are rolling in or outside just watching the sea from the deck. That was definitely one of the biggest things that drew us to the place.”

The couple knew they could get people to come to a small town like Chance Cove to experience the beauty of simple living.

“Our scenery and all the things that Newfoundland has to offer. That’s priceless,” she said.

The couple’s adventures have really opened their eyes to the beauty of Chance Cove and of people in general, Jen continued. “When we were in the final stages of getting ready to open up the first two units it was June of 2020,” she said.

Stores were just opening after the first lockdown and there was a huge shortage of goods on the shelves. It was so hard to find furniture, she added. “There were delays upon delays for online orders – up to a year,” she said. “A number of business weren’t in operation so we had a bunch of friends and family reach out and say ‘Hey! If you need anything, you’re welcome to look in my shed and see what I have,’ or ‘I’m moving and I have these end tables, do you guys want them?’ And I would be scrounging up all of these odds and ends and cleaning them and painting them to put in the units. It really did take a village to get started but somehow it all came together.”

And now? “It’s time to enjoy sharing the beauty of the ocean and the walking trail and the beach area of Chance Cove with others,” she said with a smile.

“We didn’t even know where Chance Cove was when we bought the house and we have been learning to appreciate the area along with our guests so to speak.”

A year after they bought the house they finally did the walking trail just minutes from their rental home.  “We love it there. Chance Cove is beautiful.”

They’ve gained so much making the jump into tourism, in so many ways they never expected, she added. “This entire process was like a learning opportunity for us to kind of think about what’s there and what the place has to offer, because we’re not from Chance Cove. We’re kind of just learning to appreciate it a little bit at a time whenever we get a chance to go visit and we love that we get to share those experiences with others.”