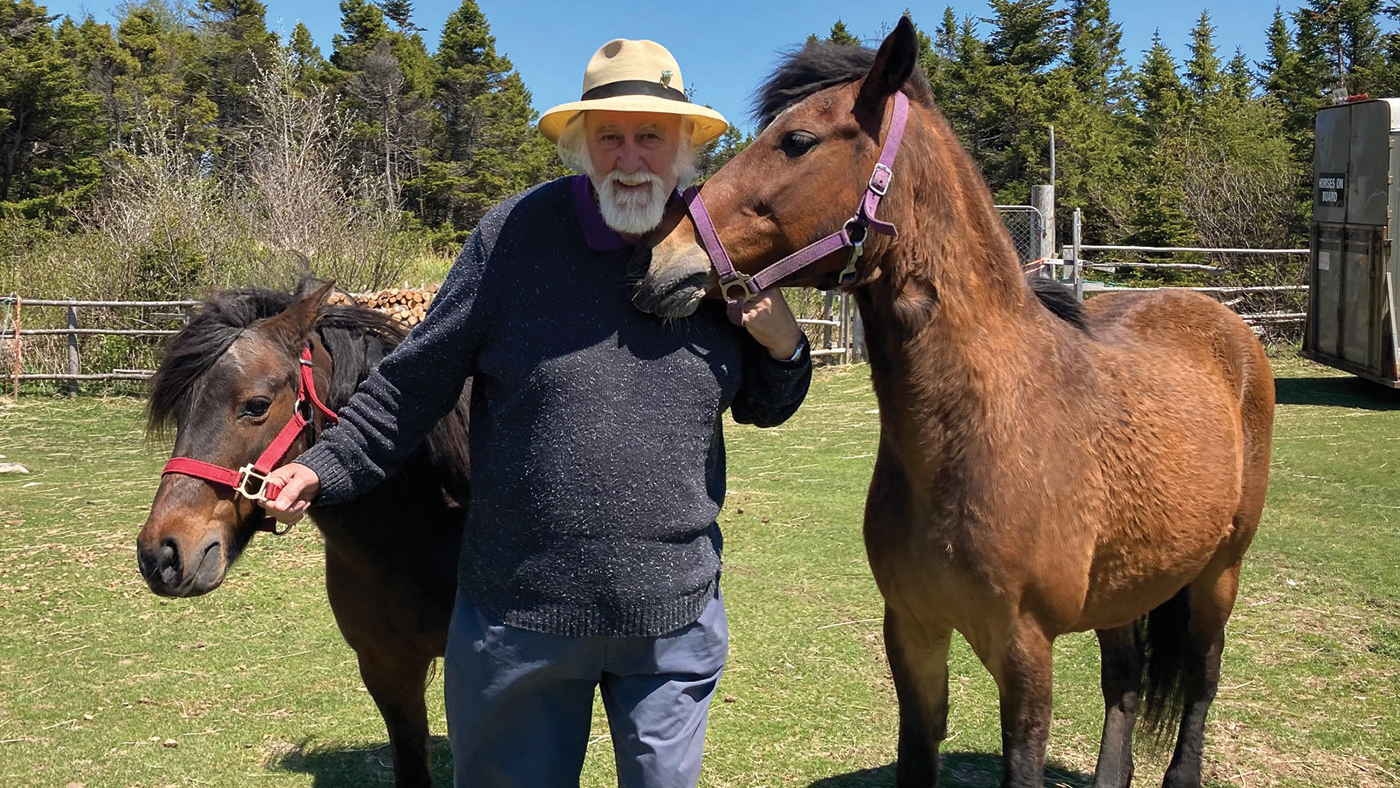 Meet Clifford George and his Newfoundland ponies, Annie and Brandy

Like many artists, Clifford George sees the beauty in almost everything. One thing he admires more than most, however, is the Newfoundland Pony.

“The Newfoundland Pony supported the communities by helping to build flakes and stages, and they brought out the logs for the churches and for the wharves. Every day, they worked to help families and communities.” 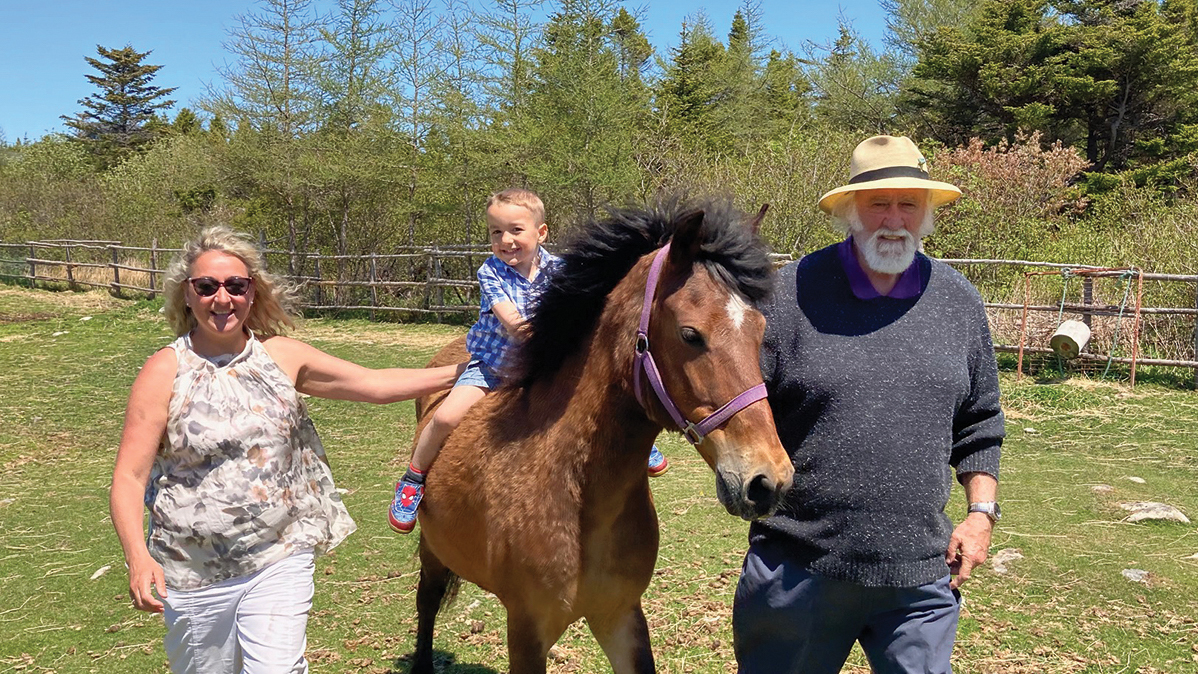 It’s easy to see why George is in love with the Newfoundland Pony and his passion is often expressed not only through his words, thoughts and generous deeds, but also in his artwork. Where does the passion come from?

“When I was a young boy, 14 years old, my father bought me a Newfoundland Pony we named Topper and Topper became embedded in me forever.”

The Newfoundland Pony was in danger of extinction. George partnered with Dr. Andrew Fraser, a veterinarian and animal welfare specialist who was the head of the Animal Care Department, to try and change that and make a difference.

In 1984 there were about 4-7,000 NL Ponies in existence. In 1992, there were 500. By 1997, there were only between 63-100.
“We started going around Newfoundland and started saving the ponies from the meat trucks. We just started buying them. One pony we bought three times. Last time I bought her, I didn’t have much money – I don’t have much now – but my daughter gave me the last five hundred dollars to buy Heidi, that was her name, for the third and final time.”

Brandy and Annie notice they have company and come sauntering over for affection. I’ve brought my four-year-old nephew Kaleb along for the experience and the ponies show their love of children immediately. Brandy and Annie stay close to Kaleb and gently take turns guiding him around their home-based pasture on their backs. The two ponies seem almost one as they nuzzle and snuggle with my young nephew.
Settling into George’s kitchen, he takes out his sketch pad and tells a few pony tales as he puts led to pad to create a keepsake for his young visitor.

“My mother told me that when I was a little boy I’d be sitting on the floor and sketching ponies, and once the minister was there, he just come for a cup of tea in the morning. He asked me to go to church. ‘I don’t want to go. Go away and leave me alone. I’m sketching ponies,’ Mom told me I said to him.” 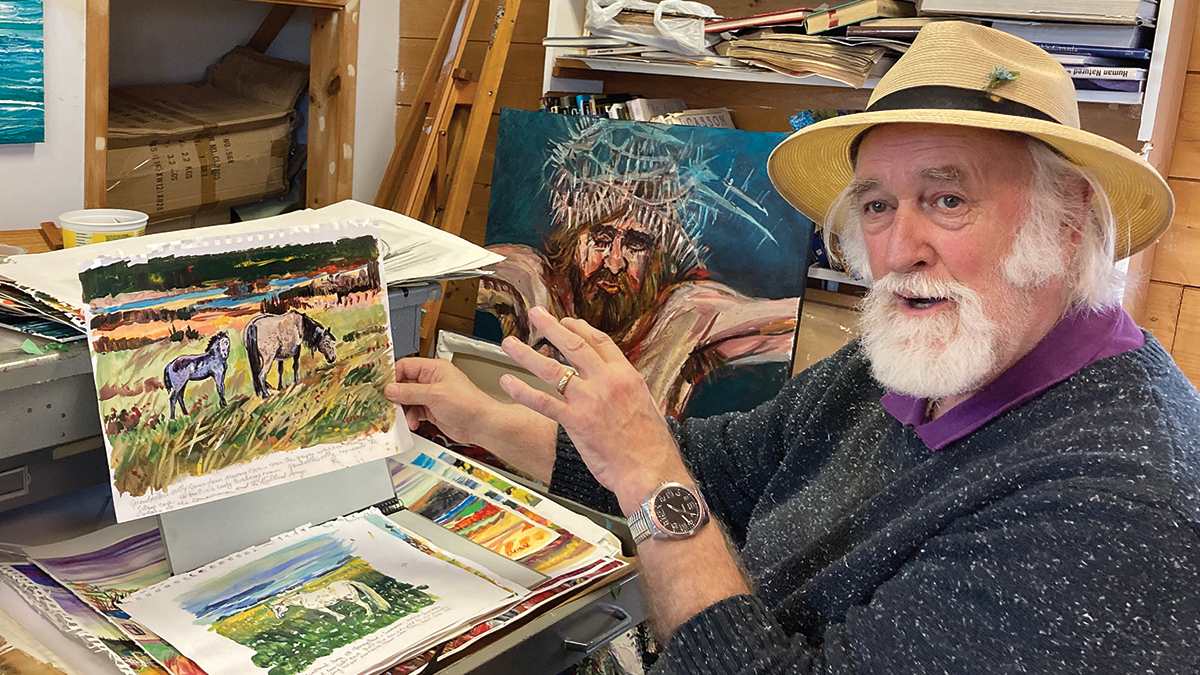 Newfoundland ponies are unique for a few reasons. We head upstairs to George’s art studio to study a few of his creations as we yarn. Pony portraits, sketches and paintings cover the walls. There is more artwork along the floor and in cupboards. “The real beauty to behold is out there,” he said with a smile. We head back outside to spend more time with Brandy and Annie.

“See, he got a winter coat that keeps him really warm and keeps the water off. They got a short back, which makes them powerful, and a long, thick mane to keep them warm in the winter and a low-set tail to protect the lower extremities from the cold like a scarf would for us. They developed those characteristics over the last four or five hundred years living along the coast of Newfoundland. They are a hearty pony, just like us Newfoundlanders,” he said with a twinkle in his eye.

Annie and Brandy have everyone’s undivided attention for a while. When they finally wandered away, George laughed and said; “See how much they liked the little fella? As soon as he left, they took off, didn’t they?”

As if knowing he needed some attention, Annie and Brandy move in closer and allow themselves to be lead around.
“That hits me because people are not interested in their heritage anymore and it’s not taught in schools. Growing up, we knew what was around us because we were taught. And we were all as free as a Newfoundland Pony in the summer months. We could do what we wanted.”

He’s hopeful, he shared. “I think the pony is going to survive now. I really do. Jack Harris is doing a wonderful job, trying to straighten things out.”

But as always, George has something to add to that; the twinkle in his eye gives that much away. “You know what it says in the Bible about straightening things out? There’s a proverb that says, ‘that which is crooked cannot be made straight.’ Now, what do you think of that? I says this: as long as we saves the Newfoundland Pony, it’s all right.”