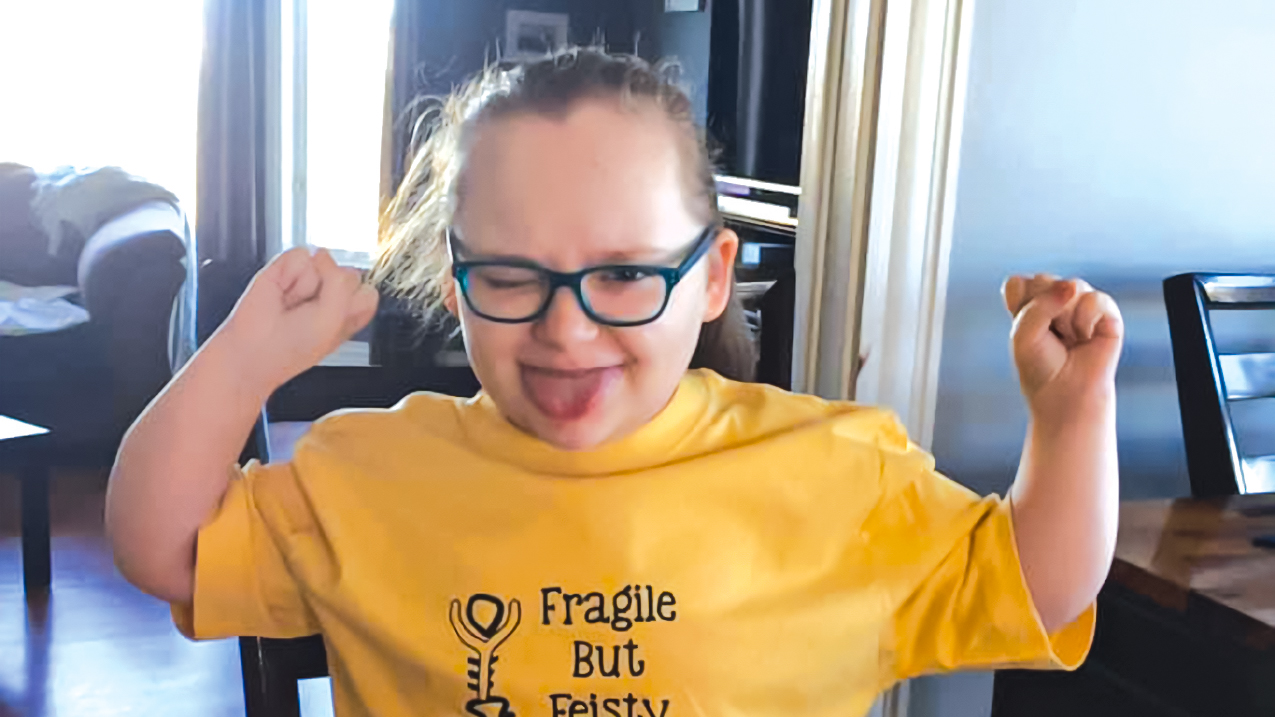 Faced with a rare form of brittle bone disease, Shanea Halleran is a 12-year-old that has suffered more than 300 fractures.

Shanea Halleran was just five weeks old when she fractured her arm, two of her toes, and two of her ribs. Janelle Making, Shanea’s mother, noticed a problem one morning. She and her husband rushed Shanea to their family doctor, who immediately sent them to the Janeway, and an X-ray showed a broken humerus.

After being kept in the Janeway for eight days for questioning by child protective services and police, a full skeletal X-ray showed that Shanea had another five healing fractures. Two toes, two ribs and her other arm were all fractured in addition to the initial broken arm.

The doctors then ran multiple tests on Shanea, including one for osteogenesis imperfecta, or “brittle bones.”  The conclusion was that Shanea’s parents were abusing her.

We were put under the scope for eight months,” said Making. “And the thing is, we just had a newborn baby. And our newborn baby was hurting and was breaking, for reasons we had no idea what was going on. We were focusing on trying to get the doctors’ attention to her, medically, instead of putting their attention on us as if we were physically hurting her.”

Even though her parents were constantly monitored by child protective services, Shanea’s bones continued to break and fracture. The doctors couldn’t figure out what was wrong with her.

The solution? Wait until Shanea was old enough to talk so that she could vouch for her parents’ innocence. “When I got off the phone with her doctor, her father just jumped in the car.”

Determined to get answers, he drove staring to the hospital.

The doctor assigned to Shanea’s case decided to send the X-rays to Germany as a last attempt at figuring out what was wrong with Shanea.

“Within a few days, our doctor calls us back and she was like, ‘Oh my gosh, Shanea’s got a very rare form of brittle bones disease. She needs to get on treatment yesterday,’” said Making.

After eight grueling months, child abuse was ruled out and Shanea was diagnosed with osteogenesis imperfecta.

Now almost 13, Shanea has had well over 300 fractures.

“I’m after breaking her collarbone, I’m definitely gonna say, twice now. Just simply picking her up. Picking her up underneath her arms like you’d normally pick up a child. One night I picked her up, and ‘snap.’ I actually heard it snapping. And she let out this howl,” said Making.

Making immediately took her to the hospital emergency room, and sure enough, Shanea’s collarbone had broken.

Because of her condition, Shanea is almost always in a wheelchair. She has rods in her arms and legs and has had to more recently start using a back brace at night to combat spinal curvature.

And while she’s been through many surgeries – about 13 according to Making – and suffered more pain than most people will throughout their whole life, her strong will remains.

“Overall, she is such a good kid,” Making said. “I’m hoping it’ll never change now that the teenage years are comin’ up.”

And it’s not just a strong will, either – Shanea’s remarkably tough.

“Even her doctor is after saying to us that the pain she’s after incurring in her lifetime is phenomenal. And she takes it all in stride; she’ll say, ‘Yeah, it’s hurtin’ a little but I’ll handle it. I can deal with it.’ I get a hangnail and I’m almost ballin’ in the corner! And here you are with probably two breaks, and you’re like, ‘Yeah, I’ll be fine. That’s good.’”

NOT DEFINED BY ILLNESS

Despite how big of an impact her disorder has had on her life, Shanea refuses to let it define who she is or her identity.

Whether it’s swimming, playing with her five cats, being on her phone, reading, playing games, or hanging out with friends, she’s just like any other girl her age.

“I’m so glad that she’s so positive about having so much going on with her,” said Making. “Because… physically and mentally, it would drain me to the point of not being able to do it anymore.”

Ironically, she says it’s usually Shanea that comforts her whenever they’re at the hospital.

“When I bring her down to a physio appointment or (there’s) something that’s broken, and I’m ready to just drop on the floor in tears, she’ll look and say, ‘Mom, but I’m okay. You don’t have to cry. I’m okay.’ She’s the one that’ll have something hurt and she’s trying to console me, you ’know? She’s so caring towards someone else. She’s so loveable.”

While Shanea has to deal with a lot more than most children her age – or most people, for that matter – she remains incredibly positive and strong. It’s amazing what she’s endured through almost 13 years, and her story is an amazing, inspiring reminder that life is worth fighting for.