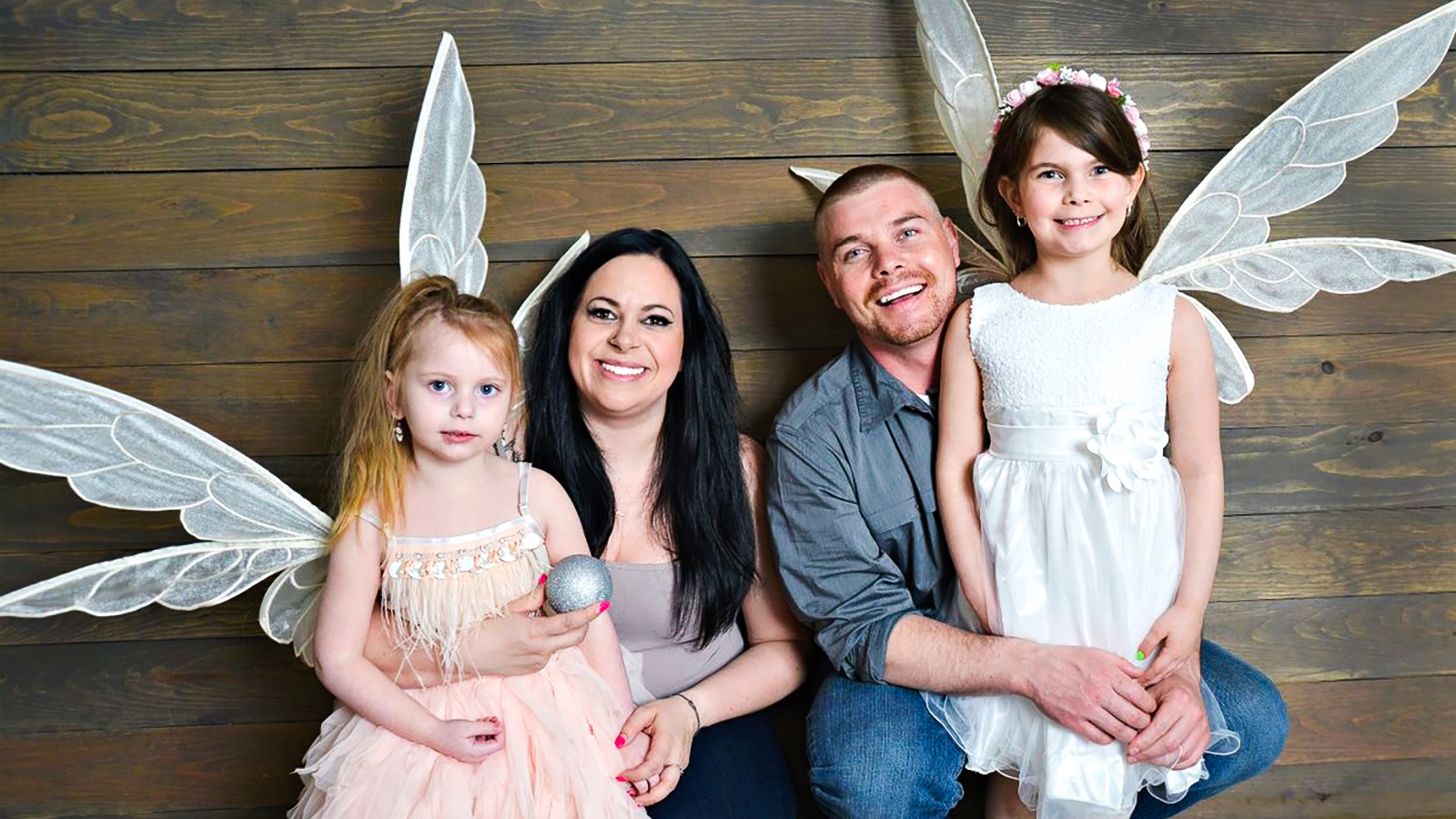 Port Aux Basques’ Jersey Gaudet continues to excel in the face of a terminal diagnosis, leading her family to adopt a much needed glass-half-full mentality

I’m exhausted,” Brittany Gaudet admits in a one-on-one with The Newfoundland Herald. “If I didn’t have so much family support …”

The conversation trails off, highlighting a strong network of family and friends that have helped anchor Brittany through thick and thin – cementing that the old adage, it takes a village, is more than applicable for the Gaudet clan.

Context is important here. Brittany, and her four-year-old daughter Jersey, are not long removed from one of their bi-weekly treks from Port Aux Basques to St. John’s, a road trip that eats up some 18 hours and rakes up an incredible 48 thousand kilometers annually.

’LET’S DEAL WITH IT’

All of the minutes, hours, and miles logged are key when you peel back the layers to find that the trip is not one of pleasure or business, but one of the necessities of the ultimate, crucial kind.

Jersey is the first child in Newfoundland and Labrador to receive a ground-breaking treatment for CLN2 Batten Disease, a rare, fatal disease of the nervous system that the Gaudet family have become intimately familiar with in the past decade.

Jersey’s older sister Ava was diagnosed with the very same ailment in 2015 before tragically passing away in 2017, the same year that a new and cutting-edge enzyme replacement therapy treatment became the first globally approved treatment for CLN2 Batten Disease.

“I just get up every morning and I’m like ‘throw it at me, whatever it is, let’s just go.’ Because the sky’s the limit for my kids. I’ll do whatever I can for them,” Brittany shares passionately.

“If something comes my way, I literally just sit back now, have a little laugh no matter what it is. All right, let’s figure it out. Because if I sit back and I cry, I’m going to literally cripple myself to the point I’m not going be able to do it … you just really got to sit back and be like, ‘OK, this is what life’s throwing at me right now. There’s a reason for it. Let’s do it. Let’s deal with it. Let’s get through it.’

“I want to give my kids that strength as well to know that Mom didn’t give up, Dad didn’t give up. This is what we’re doing. This is how we’re going to get through it, to always come to whoever you have for supports to be like, ‘I can’t do this on my own.’ I realize it really does take a village. I know that’s such a cliche. But in my life, I’ll be needing my village. I need all my people … I need you all.”

The aforementioned village of supporters for little Jersey is anchored by big sister Cali – aged six – who has matured beyond her years to become a guiding hand for Jersey, overcoming emotional hardships in her own right.

“Cali has not been handed a good set of cards. I mean, she remembers everything about Ava and losing her. Cali was three years old when Ava passed. She remembers it all. A few months ago, Cali looked at me and said ‘so when am I getting it? ‘Your child is six and that’s the thing. They’re six. So I was like, ‘no, honey, you’re not going to.’ And she’s like, ‘but my sisters did.’ And it’s hard … how do you explain genetics to a child?

“But she’s excelling in school. She’s constantly getting stuff sent home about how compassionate she is from her teachers. I believe it’s because she had to deal with so much. And she’s a really good sister and I think Jersey benefits from that lots. She can mimic her sister a lot, which helps her learn. I’m very blessed with the fact that Cali is who she is because, I mean, it’s not easy.”

The cross-province trek that sees Jersey undergo a procedure that delivers her enzyme replacement therapy treatments directly into the fluid surrounding her brain, through a method known as an intraventricular infusion, has been in short, a resounding success thus far.

Jersey has gone from having debilitating seizures that could stretch upwards to 45 minutes in length, to not having an attack since March 2nd of 2020.

“The therapy and infusions, it’s just so surreal because she is getting such a second chance at life. She is thriving. She’s progressing with learning. She’s now on the road to being potty trained, stuff that Ava never could do. She’s still very mobile, running around, eating, drinking. She’s delayed in speech slightly, but that’s it. Cognitively, she’s completely aware of everything and understands everything,” Brittany shares proudly.

Needless to say, given the frequency of visits to the Janeway Children’s Hospital in St. John’s, the staff have become more than family to little Jersey, a trooper of the highest order who is punching far above her proverbial weight given the severity of her diagnosis.

“It’s a massive part of my life. And I’ve seen some nurses go from trying to have babies to being on mat-leave. I’ve been there for all these things,” Brittany says of her relationship with the staff at the Janeway.

“She goes to the PICU (pediatric intensive care unit), so it’s always the exact same staff. They are the ones that deal with the sickest of the sickest kids. So you’re going in there and we’re seeing some children that are in there and you’re like, ‘oh my God, look, I know my daughter’s terminal, but she is getting a second chance at life right now. I don’t know if these children are.’ It’s like being in the Twilight Zone. You literally got to put it aside. You can’t even go over and comfort families anymore because of COVID. It’s very, very difficult to be in that situation. But the staff makes it so pleasant because they don’t make you feel like, ‘OK, you’re here because your kid is sick.’ They literally laugh and joke with you and make everything as easy as they can in the hardest situations that people are dealing with.”

Asked what advice, if any, Brittany Gaudet would offer parents faced with a similar, grim diagnosis, coming across those forks in the road that seems to be continuously wrought with hardships, and her first instinct is one of calm, collective thought, and embracing life as a glass-half-full.

“The most encouraging thing you can say to someone is ‘just breathe’. Just breathe. Because if you don’t take the good days and focus on them, you’re only going to focus on the bad,” she shared eloquently.

“It’s more relevant for me to talk about Ava because she regressed so quickly. Like when I would look at things like that – and my mom had a hard time focusing on what things Ava could still do – I was the opposite. I’m like, ‘OK, Ava can’t walk anymore, but she can still crawl. Alright, we’re celebrating crawling’ … when she could still eat orally a little bit, but most of her food was through her G-tube, it’s like ‘nope. She still ate that today, we’re celebrating that.’

“You have to celebrate the little things because those are what’s going to guide you through it. If you do not celebrate the little things, you are going to cripple yourself. I had to sit back and realize, ‘OK, my child is going through something I can’t change, but I can only help guide her and celebrate the things she can do and give her praise for the things she can do to make her feel like she’s still part of this world.’ Because if not, you lose that, you lose being a parent and become just a caregiver. And that’s really hard to get back from.

“I know at the end with Ava I didn’t feel like her mom anymore because it became so much that there was nothing left to celebrate besides her still being there. And with Jersey I vowed to myself, I will not allow myself, no matter what, to slip into that mindset because it really was a dark place to be in… most parents with children who have anything, cancer or anything and the prognosis is grim, if you sit back and you’re like ‘oh, my God, there’s nothing I could anymore, that’s it.’ You live in denial. Denial is a great place to be,” Brittany adds.

“I do not look at Jersey as if she’s terminally ill. I look at Jersey as she’s my four-year-old and she’s being a brat right now (laughs). Let’s deal with that. That’s what I have to do because if not, I’m like, ‘oh my God, my child.’ Like this could be the last time she’s ever a brat and it makes your brain just go everywhere. You just got to sit back and breathe. You take what the day gives, you celebrate the little things.”