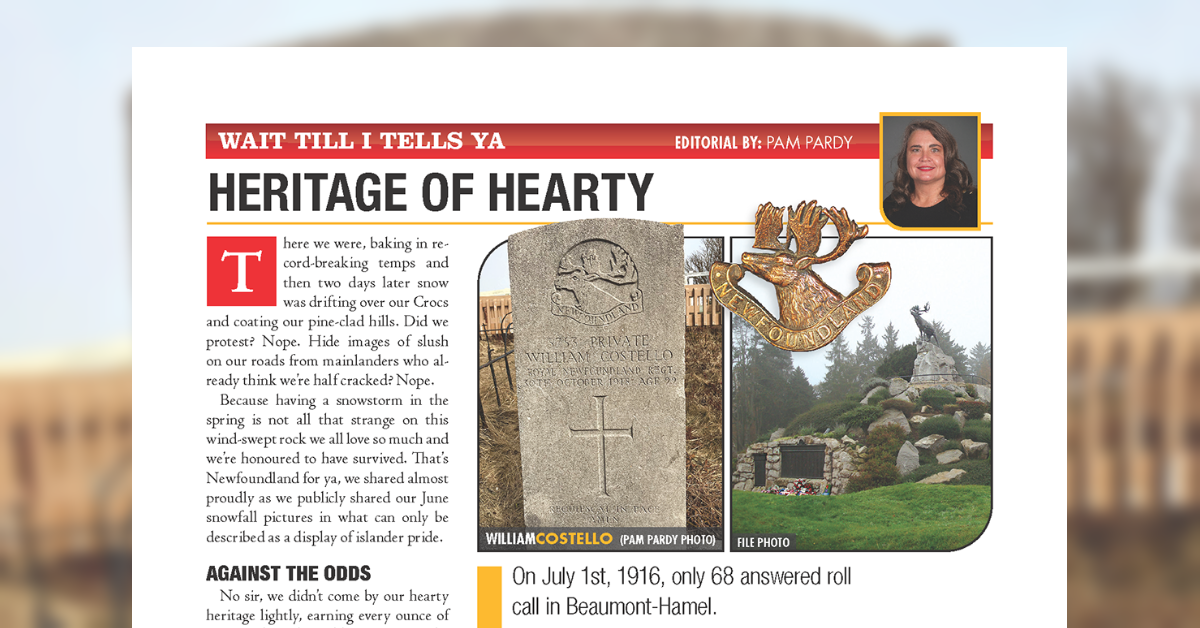 There we were, baking in record-breaking temps and then two days later snow was drifting over our Crocs and coating our pine-clad hills. Did we protest? Nope. Hide images of slush on our roads from mainlanders who already think we’re half-cracked? Nope.

Because having a snowstorm in the spring is not all that strange on this wind-swept rock we all love so much and we’re honoured to have survived. That’s Newfoundland for ya, we shared almost proudly as we publicly shared our June snowfall pictures in what can only be described as a display of islander pride.

No sir, we didn’t come by our hearty heritage lightly, earning every ounce of our rough and tumble reputation the hard way – by showcasing a great attitude while surviving against the odds tossed our way by the unforgiving Atlantic and many other forces. We’ve learned over the years to take Mother Nature’s sense of humour in stride and we wear a come-what-may attitude as a badge of honour while facing adversity.

But while the often unpredictable weather has certainly enhanced our reputation when it comes to facing hardship, what really set us apart was our Royal Newfoundland Regiment, an infantry regiment in the Canadian Army.

Many know the tale, though it always deserves repeating. 543 men, mostly unmarried volunteers, many of them fishermen from all around this province of ours, headed bravely into battle. On July 1st, 1916, only 68 answered roll-call in Beaumont-Hamel. 324 men were killed or missing and were presumed dead and many more were wounded.

While that one-day toll was great — and is what often stands out in the history books — travel around this province of ours and you will see tributes paid to the incredible sacrifice made by those who remained fighting even after such home-felt loss.

In a graveyard in Cape Broyle lies Private William Costello, service number 5753. Just 22, he was tragically killed in service on October 30, 1918 – the day the armistice treaty marking the end of the first World War was signed.

In Come By Chance, a monument stands in memory of Private Alexander Gilbert, a Regiment member who was killed in action in France on March 2, 1917. There are many more young men to be found lying in graveyards throughout this province, their ageing headstones marked with the telltale caribou.

While Tommy Ricketts might be the most famous of all the fighting Newfoundlanders, there are many a Newfoundland family who have a brave and hearty heritage to be proud of.

This Memorial Day morning we may wake up to the sun streaming in through our windows. By noon, when it’s time to celebrate Canada Day, we may be slugging on our sou’wester to keep the rain off our noggins as we head outside to burn a few hotdogs for the youngsters, but you know what? Newfoundlanders and Labradorians won’t really care one little bit either way.

We’ve got it good here, and we know it, and if all we have to endure on such an honourable day is what Mother Nature throws our way, then that’s fine by us. While being able to take a joke is certainly one of our trademarks, being brave and hearty to the core is as well. That’s not a hard ol’ way to be known, and for that, we can thank the lads who were part of the first 500 and all the ones who bravely kept at it against the odds.

Thank you all for your service.