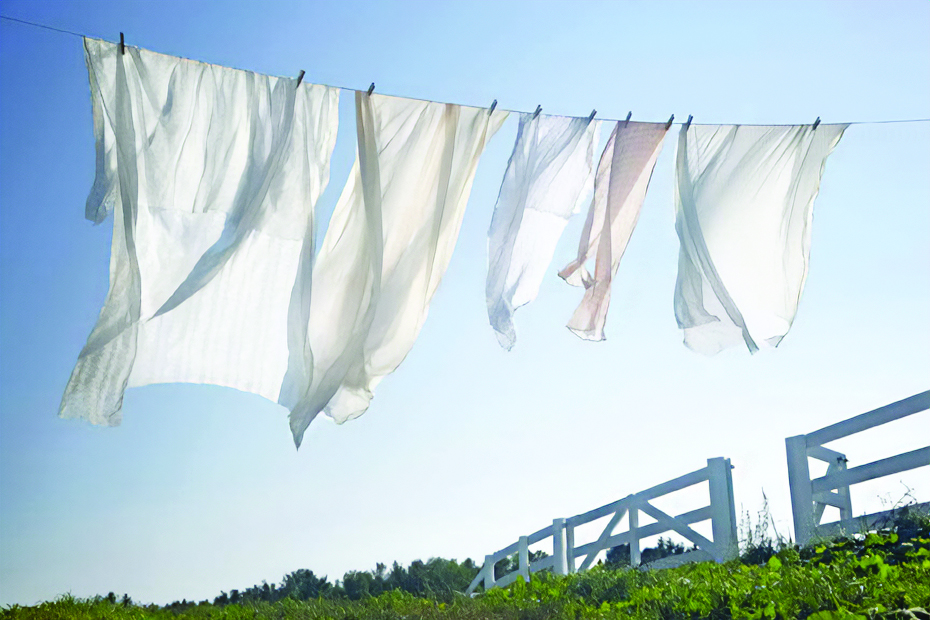 I was half asleep on a sunny morning. It was Tuesday. Wife was already up and busy at the things she does. I could smell coffee and I was considering what was next in my life when through the open window I felt the early summer breeze and I heard a sound that was instantly recognizable.

It was the sound of a bedsheet on the line snapping in the wind.

It wasn’t the sound of a shirt or a towel. It was that lovely sound of a full sheet flapping in the wind. Audio memories can be powerful to the point where they almost bring you to tears.

In my little shed behind the house there is a metal dome that used to be part of a lamp. Now it hangs by a wire, but when I tap it with a wooden spoon it rings a rich tone that is the exact same note that rings from the bell tower of St. Patrick’s Church in the west end. It’s a sound most familiar that has rung “the blessed hours” for over a century. It’s background music to lives lived. It’s the sound of the Angelus. It’s the call to Mass, and it’s the solemn call to funerals. That sound washes over me when I hear it recreated in my shed. That’s memory.

Nearly 70 years ago we lived in Bay Bulls. We lived in a rented house “down on the cliff” but further down the harbour was a lane called “The Alley.” A river ran through there in an area known as “The Marsh.” Grandmother would call it The Mash in the Irish way. I remember women from the area up by the river washing their clothes and slapping them against the rocks to get the water out. This would be about the year 1950. That sound of wet-washed clothes being slapped against the rocks up “The Mash” is in my head to this day. It has not faded. It’s forever.

The final sound is more universal. It will be known to almost all Newfoundlanders. Last Sunday my wife and I were down to “The Landwash.”

The Atlantic was quiet. The waves were small, and they rolled in a quiet way. The tide was full however and as they receded there was the sound we know well. It was the hiss of the undertow. It was small pebbles being sucked back into the Atlantic. It was the undertow “a-hissin’” and it’s a sound that has been happening for a long time.

It’s like the sound of drying bedsheets or a bell or the sound of clothes being washed on the rocks in a river and it strikes a chord that’s both familiar and old.

Tags: Jim Furlong, This Week With