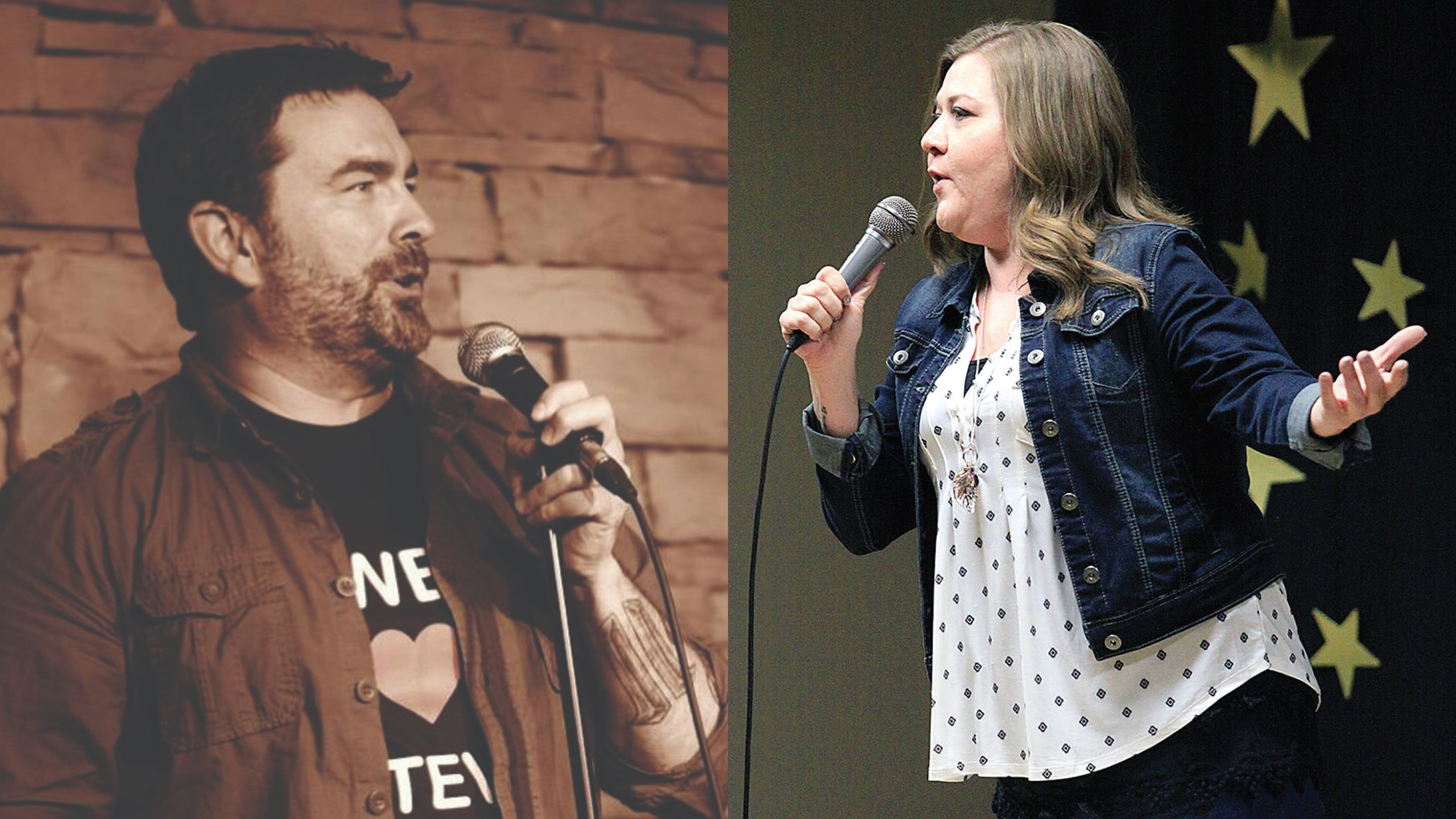 Lisa Baker and John Sheehan come out of the pandemic with funny bones intact, ready to storm the stage sharing their unique and hilarious take on the world

It’s always a pleasure to have comedian John Sheehan in the house. One of those naturally funny guys, just being in his presence can cheer the soul and plaster a smile.

He shares a yarn about a time he almost got in a fight and took his rings off (all for effect and to buy-time intimidation) and name drops another local celeb whose on-the-spot commentary made the encounter all the more entertaining.

Sheehan is a storyteller, and it’s easy to get gleefully dragged in. He’s the kind of guy who, when he gets to the punchline, you’ve already been on such a fun ride that it’s simply icing on the cake.

Lisa Baker has got it goin’ on too when it comes to tale tellin’. If you haven’t been following this lady on TikTok you are missing out in life. She’s sassy in the delightful way that only certain people – many of them Newfoundlanders – can get away with. Baker can tell you off and have you like it. She’s that woman, or ‘dat missus.’

These home-grown gems take the stage together in Right Saucy, and while The Herald reached out to help promote the show, the reality is these two heavy hitters of comedy need no help. In minutes two St. John’s shows were sold out. Of course, as fans of the two comedians, we carry on yarnin’ for braggin’ rights.

Along for the ride

Sheehan, who’s in The Herald building while Baker joins online from her Alberta home, opens. “I’m just along for the ride. Look, Lisa is John, Paul and George and I’m Ringo when it comes to this show.”
Baker is quick to jump in.

“Why do you say that, honey? By the way, I loves Ringo! I feel like Ringo is severely underrated, actually. All Paul does these days is protest the seal hunt.”

Sheehan laughs, then gets serious. “This show is selling out on Lisa’s name. That’s absolutely a fact. She’s earned it. She’s got the followers on TikTok. It’s ridiculous. She’s true. She’s real. Yeah. There’s no stopping her.”

Baker, who gets to return home for the first time since the pandemic, is over the moon excited, she shared.

“I still can’t believe it. I know it wasn’t even a year and a half since I’ve been back, but it feels like ten. It’s a long time coming. I can’t wait. I miss my family. The fact that I’m able to do a comedy tour around a visit home is even better.”

The fact that Sheehan is her sidekick just makes this adventure all the more sweet. The two met backstage at a comedy show and immediately hit it off, she added.

“Johnny and I were the only ones there that voted and paid taxes and had children. Everybody else was pretty much a youngster. Immediately I was like, ‘alright, so this guy’s my people’ and we hit it off right away.”
Sheehan says the two “play off one another.”

“Lisa is very bold in her comedy and I think she represents the province really well. I don’t do a lot of Newfoundland stuff, but she kills that stuff. I think the fact that everybody can relate to whatever she talks about, and that’s the number one thing about comedy because people can nudge the person next to them and say ‘that’s you!’ And I think Lisa’s act is a perfect reflection of what we’re all like.”

We ask if they are fans of one another. It’s a united ‘Yes!’ on that one.

“Have you seen her TikTok? She’s killing it!” Baker says the same about Sheehan. “He makes me laugh. He’s super funny. And it’s who we are as people, you know what I mean? It’s just our personalities that we’re not uptight. We don’t take things too personal.”
Sheehan nods. “That’s the thing that Lisa sells to an audience; there’s no bullshit. It’s her. That’s who she is with the volume turned up. And every great stand-up comedian has that.”

Every great comedian also gets their fair share of hecklers – online and at shows. “I feel a great swell of pity for any heckler who comes to this show thinking they’re going to win,” Sheehan laughed.

How does she deal with ‘the haters?’

“So here’s what I’ve learned,” Baker begins. “Part of me wishes I had had this success earlier in my career, of course, but I feel like I’ve reached a point as a comedian where I’m better equipped to handle a lot of things that I wasn’t ten years ago.”

“I’m a stronger comedian on stage and I take it to the show so no one is disappointed. But when it comes to hate, my attitude towards that has always been ‘if you don’t like what I do, that’s fine, it’s not for you.’ It’s for the people that do appreciate it. That do want that content. It’s the same for certain types of music or movies or whatever. Just don’t subscribe to that. Don’t listen to it. But I still can exist for those out there that want it.”

Sheehan’s been there too.

“There’s anonymity in online comments and that’s what gets people brave. There’s people who will say stuff online and they would never say it at a show for fear of just being an idiot.”So, the show’s name, Right Saucy, makes total sense, then. Baker laughs.

“We had to postpone shows because of the pandemic and then my boyfriend made me a shirt with ‘Right Saucy’ on it and I went, ‘yeah. I feel like it just fits me.’”

The fact that the shows are selling out even as they add more dates – including a trip to Labrador – is thrilling for both comedians. Sheehan says he’s not surprised. “It’s not very often you’re going to get a comic coming into the province with that much talent, that much experience, who’s going around everywhere doing shows. People need to take advantage of it.”

Baker is quick to defend her ‘Ringo.”

“And then to bring in an opening act with that much talent and that much experience; anyone who walks away from this and says, ‘well, that was garbage’ either doesn’t have a sense of humour or just got destroyed because they spoke up and said something to me or Johnny and that was it. We just ended it.”

Funny at a funeral

Sheehan shares a story about a time Baker took the wind out of the sails of a few hecklers.

“I got up on stage after and I looked at those guys and I said, ‘I kind of feel bad for you.’ You don’t mess with Lisa.”
Baker and Sheehan, as comedians, are expected to be ‘on’ constantly.

“I’ve had people expect me to be funny at a funeral. Anywhere you go, if you have a conversation, they expect you to be hilarious,” Baker shared. But how does she handle the pressure?

“I’ve just been trying various milligrams of edibles and seeing how it affects my body,” she joked.

Sheehan shared it can be a battle sometimes. “I’ve battled depression and everything else and a lot of times I just don’t want to be on and sometimes people take that the wrong way.”

“We have feelings and lives,” Baker added. Speaking of both, Baker shared she’s excited to get home and see family.

“Mostly I’m looking forward to just hanging out with people I haven’t been able to see. My friends and my dad mostly. And to have a good feed of fish again. Out here it’s not the same. So I just can’t wait to go home and eat some fresh fish and just kind of see everybody and get drunk and act like myself and not have anyone think that that’s unusual.”

“Just getting on the road is exciting. The road is a blessing and a curse, of course. At first you love it and then you hate it and then love it again. I find I really hit my stride after about the third show.”

If anyone is an online fan of the two comedians, expect that and so much more, they add.

“I call what I do online mini sketches. But the stand-up, Johnny and myself, we’re both storytellers. You’re going to get a whole range of material and topics. Onstage, I’m in my element and I’m allowed to do whatever I want and I am on this tour because I booked it, it’s my rules and it is going to be absolutely blue because at my core I’m a blue comic, so that means I’m very dirty. People need to go in knowing that this is not for children. It’s R-rated and that’s what they’re going to hear.”

As for Sheehan, he shared he’s been in reflective mode lately. “A lot of my material has been coming from nostalgia. I got at least half an hour on the 80s. I got a top-loading VCR bit. Just basically, you know what? I’m talking about my life as much as anything else and it’s pretty funny and it’s stuff anyone who enjoys having a laugh can relate to.”

And if you’re not up for having a laugh? Just stay home out of it, is their best ‘Right Saucy’ advice.

For more visit Lisabakercomedy.com or John Sheehan Entertainment on Facebook