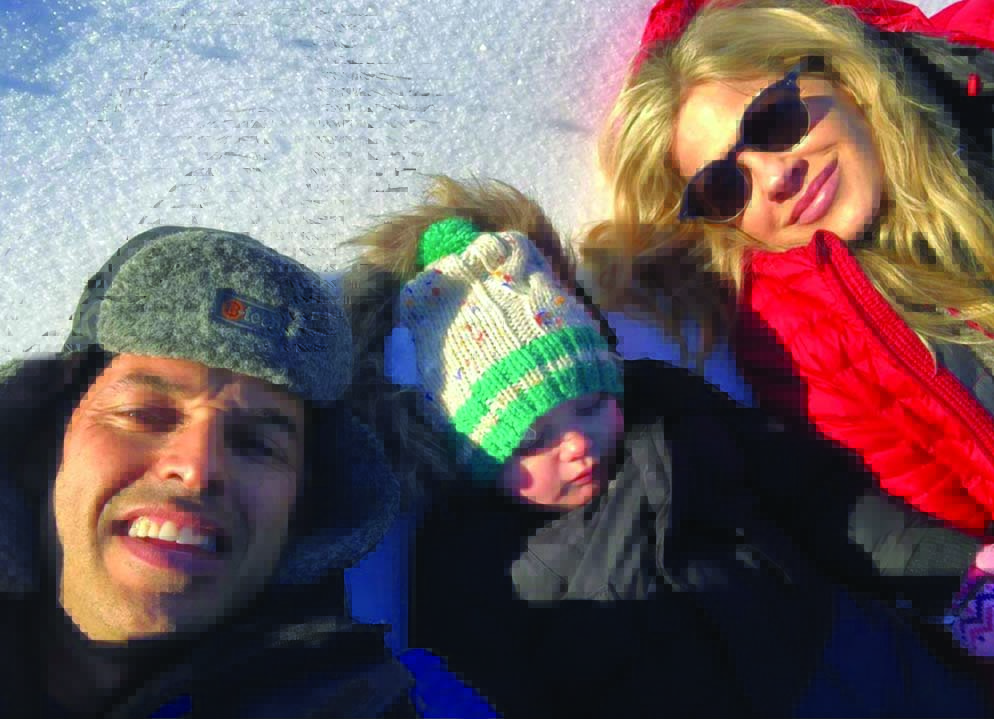 Actor, comedian, philanthropist, husband, father: Shaun Majumder gets real on living life and raising his daughter back ‘ome in Newfoundland

Shaun Majumder is not only proud of where he comes from, but he makes a point to ensure his daughter, Mattis Maple, along with his wife, Shelby Fenner, get to experience the joys of  ‘ome life in Burlington as well.

But the comedian is quick to add that living back home in Burlington, NL can sometimes be “a double-edged sword.”

“Two sides; good and bad. The great is obviously being in the safest place in North America. That’s a super important factor given the fact that I have a baby at home. The fact that it’s Newfoundland and the nature, that’s the upside in terms of being outside all the time and having the freedom that you don’t get in Ontario or Los Angeles. That feeling of freedom when you’re in Newfoundland? You have to be here to understand,” Majumder began.

There’s more positives. “Every time you pass a human you are instantly, obsessively aware of everything good around you,” he said.

“People are friendly. They are genuine and kind. It relaxes you from the time you arrive and that has a huge impact on mental health to the positive.” The down?

“You want to be isolated, but isolation takes a toll on mental health as well. Being in a small place where you don’t have access to stuff as quick is tough. Issues like health care is different. I worry in the dead of winter, what if someone gets really sick? And at a time when anxieties are naturally high anyway, that’s a concern. But, there’s something about being home that can take stress away. I grew up in Burlington, so I know the rhythm.”

Still, getting back into the rhythm of home means that work, as it has for many in the entertainment world, has stalled. There’s no standup. There’s not much of anything.

One of the reasons so many are “mad” about Majumder is because he is real. His humour, like how a Newfoundlander gives directions, is embraced. His comedy, even while starring on This Hour has 22 Minutes, reflected real life. He presents his true and honest self.

“It’s been hard. It’s been challenging in many ways, like it has been for everyone in North America. But Shelby and I and Mattis, we embraced out inner bayman and just went with it.”

Being home for Christmas was fun. Majumder says that Mattis brought a lot of joy. He also enjoyed playing Santa for the kids in his hometown.

“Every year in Burlington, Santa finds a little bit extra cash to make sure the kids who maybe are less fortunate get a little bit extra. And so over the last bunch of years, I’ve been doing that. But I’ve been away working, so this was the first year where I got to actually help Santa hand out the gifts. We went around, myself and  a couple of elves, and we went delivering presents and we had so much fun.”

Once the snow came, there were ski-doo rides to enjoy and snowmen to make. “We were embracing winter which was phenomenal because we were able to really have fun here at home.”

When he finally had to leave for work upalong, it was almost a shock to the system. “My head was spinning. I had to go to Michigan to shoot a commercial but you want to keep the family safe, but together. And I have family away, so you work on fitting in time you need to know if you are safe, or sick, or not.”

Times, he offered, have changed. But he will be back on NL soil by end of April, he figured.

RACE AGAINST THE TIDE

Having a daughter means planning ahead and thinking differently, he shared. He’s learned to embrace the positives of a pandemic, for one thing.

“Never have I been more excited about and thankful for a pandemic and lack of employment,” Majumder said.

The pandemic has forced some downtime, and he’s grateful for that, he added.

“Our little family had been together every day since (Mattis) was born and thinking about that as a dad and being there and being able to influence her at this stage with Shelby, it’s amazing.”

Mattis can’t go to daycare, or to birthday parties, but dad does get to enjoy first steps and first words.

“For me as a dad, to be able to hold on to her and to be with her and make her laugh and for her to make me laugh and now she’s getting to that age where she’s talking up a storm and I’m able to just continue to be a part of all these magical, magical days and moments because I’m not able to tour, so I’m beyond thankful for the experiences that we’re having. You know, despite the challenging times, it’s been really great too.”
It’s been a wild, wild ride, he continued. But there have been employment blessings as well, like being involved in a CBC show called Race Against the Tide.

“Race Against the Tide was a blessing to have because it’s a comedy show featuring the world’s finest sand sculptures and I’m the host,” he shared.

Filmed in New Brunswick, Race Against the Tide is a competition series that sees 10 teams of highly skilled sand sculptors compete against the backdrop of the Bay of Fundy.

Hosted by Majumder, the show is slated to air on CBC and CBC Gem. The half-hour unscripted series was a lot of fun to work on, Majumder continued.

“This pandemic has taken its toll and figuring out the compass as to what’s next, it’s been hard. We had to dial back on a lot of things. There was a lot of excitement around The Gathering in Burlington. We were working to expand. That was all put on hold and the breaks were put on everything.”

The only thing to do, he added, was focus on the good.

“Thankfully, I see the bookings for this year are already taking off. But in terms of where to put my energy, my next step as a creative individual? Well, I can still write and develop show ideas. That’s been a spark for me creatively.”

He still works on his standup, though his audience is family and friends.

“You go into survival mode, you turn inward. You have to put dreams and things on hold for now and kind of let go. The human body, when it goes into shock when you fall in cold water or you go overboard, your body focuses on drawing all the blood away from the non-essential parts of your body and focusing on the most important, which is the brain and the heart. All you need are the most critical organs to stay alive.”

And that, he explained, is what living through COVID has been like.

“Things become about survival and maintenance. You’ve got your family and   as long as you stay connected to family and to home, you won’t ever forget your priorities.”

Check out Majumder on Twitter, Facebook & ShaunMajumder.com. Stay tuned for much more in the coming weeks on Majumder.