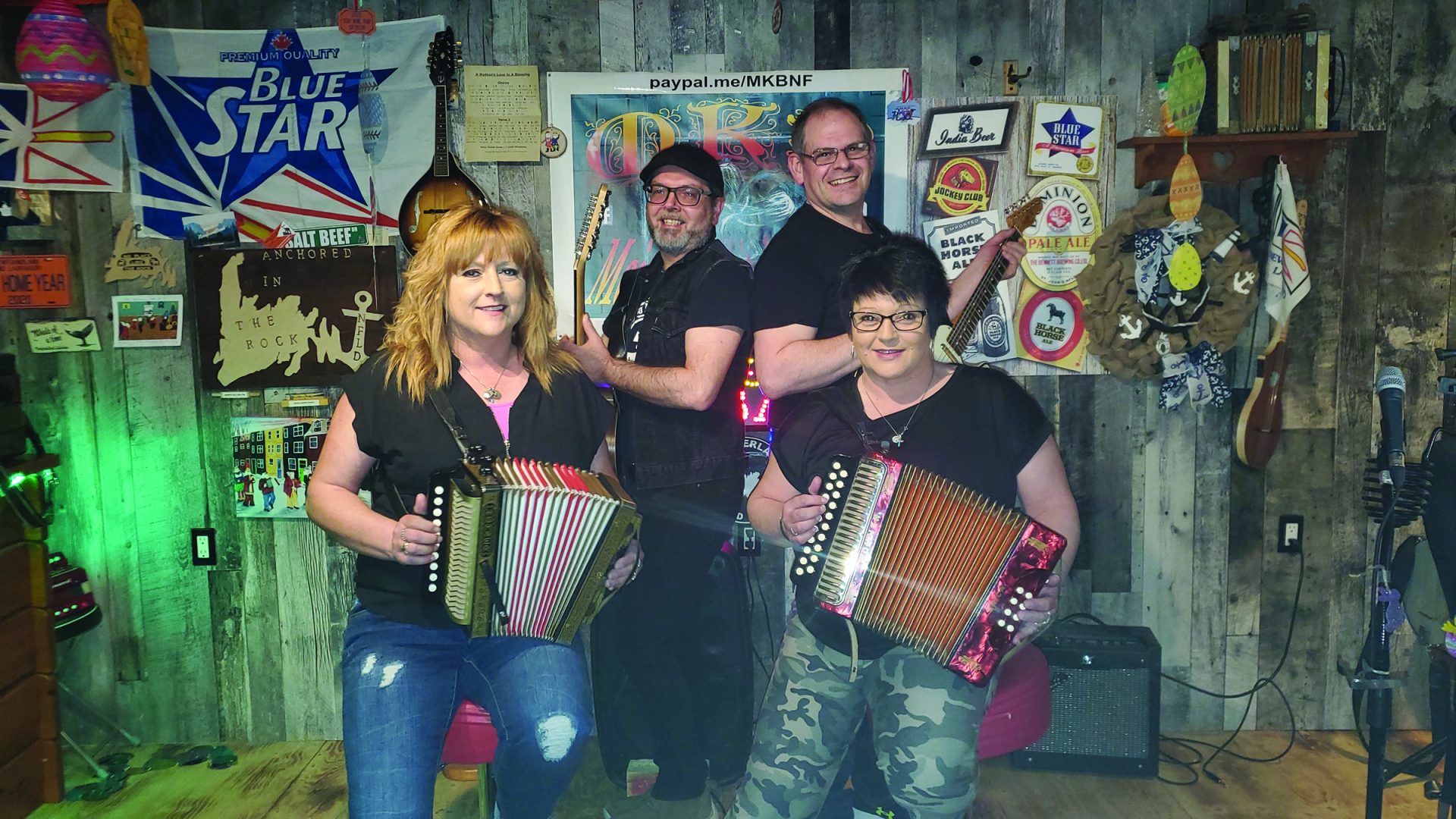 From traditional Irish favourites to classic country, the energetic folk behind Mainland Kitchen Band bring joy to anyone tuned into the tunes on Saturday nights

Looking for something to do on a Saturday night? Why not pop into the online  ‘COVID Cave’ with the Mainland Kitchen Band (MKB) crew. Jimmy Tarrant leads this merry group of upalong Newfoundlanders.

Tarrant, who hails from Lawn but now calls Cambridge, Ontario home, left his homeland over 25 years ago. The band, made up of Tarrant along with Rowena Turner from Little St. Lawrence, Turner’s sister Myra Bennett and Bennett’s husband, Grand Bank’s Paul Bennett, enjoy getting Newfoundlanders and homesick Newfoundlanders on the go.

“We do a Saturday night show, 8:30 P.M. Newfoundland time, and the response has been incredible and overwhelming from all over the world. I think everybody who has had any dealings with Newfoundland is on there. It’s been nuts,” Tarrant began proudly.

Just that past weekend’s show had over 7,000 devices logged in, and with probably three to four people per device, the numbers are up there, he added.

“People connect through their televisions and have us on while they party. We’re basically a Newfoundland traditional band, but we branch off to country and a little bit of classic rock but with the accordions, we always turn back to the Irish stuff to make sure it’s a real old-fashioned kitchen party,” he said.

While Tarrant explained their music may sometimes seem “all over the map” it all has the same purpose: to provide a fun backdrop for people stuck at home during a pandemic.

Christy Moore, The Pogues, The Dubliners, Eddie Coffey. If you tune in, guarantee you’ll hear something you love. While Saturday nights are for entertaining the masses, Sunday mornings belongs to OZFM’s Jigs & Reels.

“Every Sunday. I guarantee. Even when I was 12-years-old. Growing up in Lawn, we only had two stations, so we almost had to tune in, but now it’s by choice and I’ve been listening to that show ever since it started,” Tarrant said.

REACHING OUT TO ALL

The band has actually had a few tunes of their own played on Jigs, something Tarrant says he’s grateful for.

“Danielle Butt does a great job. Our song Eastern Bound has been played a bit and she’s played a few of our jigs.”

As for their band, Tarrant says they just want to entertain, and that plan seems to be going well. “The feedback we get from all over the place; Australia, Norway, South Africa, Denmark or from pretty much anywhere all over the world where there’s displaced Newfoundlanders, is great,” he said.

The main message Tarrant and team would like to get out is two-fold: thank you, and keep tuning in.

“We thank everybody for tuning in. It’s a bit of fun for us. We had no shows or anywhere to play. We’re still in lockdown in Ontario. So I thank everybody for joining in and listening and for all the feedback that comes through. It keeps us happy spreading joy to others through our music.”