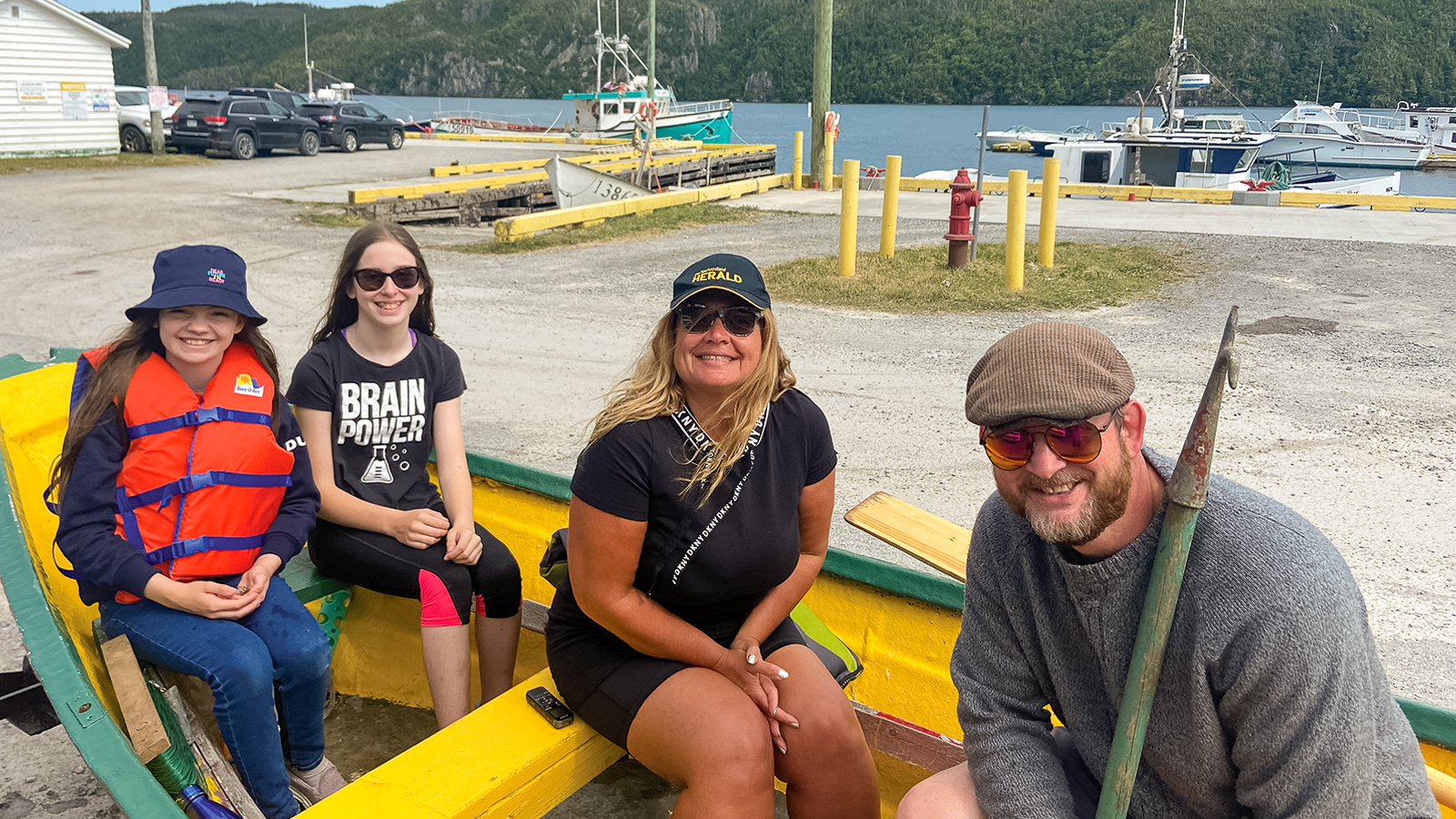 The Little Placentia sits on a trailer in the yard of the oldest home in Placentia, the town Darrell Duke was born and raised in. The dory’s owner seems to know everyone, and the restored fibreglass dory he salvaged and restored in Clarenville seems to feel right at home in the lupin-filled yard of a friend-of-a-friend. As we prepare to set sail, or more accurately, set row, around the harbour, Duke shares a tale of Placentia and the Royal St. John’s Regatta.

In 1877, a hearty and enthusiastic crew who called themselves the Placentia Giants, carried their boat from their hometown to St. John’s to participate in the Regatta.

On the 100th anniversary of that endeavour, a few local fellas with the Placentia Lions did the same thing again; walking their boat to the event, and claiming the Triple Crown two years in a row.

A fitting inspirational tale for this day. The once dull-looking but now gloriously bright and happy-looking dory is ready to carry us around, though that it’s seaworthy is quite the miracle.

“It had nine holes drilled in its bottom. At some point, picnic tables were built into the dories – built initially in the late 70s for the then-annual dory races in Clarenville. The builder was Max Grandy, then of Shoal Harbour, but originally from the Burin Peninsula, and the holes were drilled to allow rainwater to drain. I restored it, and now she’s good to go. We hope,” he said with a wink.

The Little Placentia has sister ships as well. “There were four dories sitting on the ground for many years until I got permission to take one, as long as I recognized they were ‘unseaworthy,’ I was warned.” Duke wasn’t having any of that.

“Rowing is my main source of exercise, and both my youngest daughters love to row. Emma is quite adept at it while Jessie is still learning the ropes. But restoring these pieces of history has become a passion as well,” he added.

The yet-to-be-officially-named Little Placentia had its holes plugged with pine and Duke replaced the seats, though he left the bottom unpainted to help it dry out last year.

He left the ‘risin’s’ (the old boards which hold the seats) used to tie a graple (grapnel) or anchor rope on, he explained.

“The seats are also known as tauts in many areas of our province. The rope tied to the front of the boat is called the painter,” he added.

His passion for continuing tradition is obvious and he carries out his rowing missions with love. “My late Dad made the boat trailer from scratch. The boathook belonged to a good friend, Shawn O’Keefe, who died at the age of 55 almost two years ago,” he shared.

The author of The Garden Gate shared what feeds his dedication.

“Rowing a dory on a calm sea is the epitome of peace. It’s something you don’t need to think about; you can row really fast, or just haul in the oars and let the send (current) carry you wherever.”

But staying put carries its own peace as well, he added. “Sometimes you manage to stay in one place. You get rare views of the varieties of wildlife, both on land and in the sea: eagles bringing rats or whatever back to their young in their nests, otters playing, mink catching fish, seals, gannets and kingfishers diving.”

Duke used his passion for rowing when it came to penning his latest, his first novel, Swept Away, which will be released soon. “My favourite time to row is at night beneath the stars and getting lost in my thoughts and drawn into the path of the moon painted across the surface of the sea. Schools of connors attack the bottom of the dory to feed on snails; that, in itself, becomes a new excitement. And the list of encounters and adventure goes on,” he added.

The Little Placentia will be featured on the cover of Swept Away, but for now we just enjoy a wee row around the harbour.
While the wind doesn’t exactly cooperate, it’s easy to see where Duke’s passion comes from, and the day in the dory is certainly one for the books.