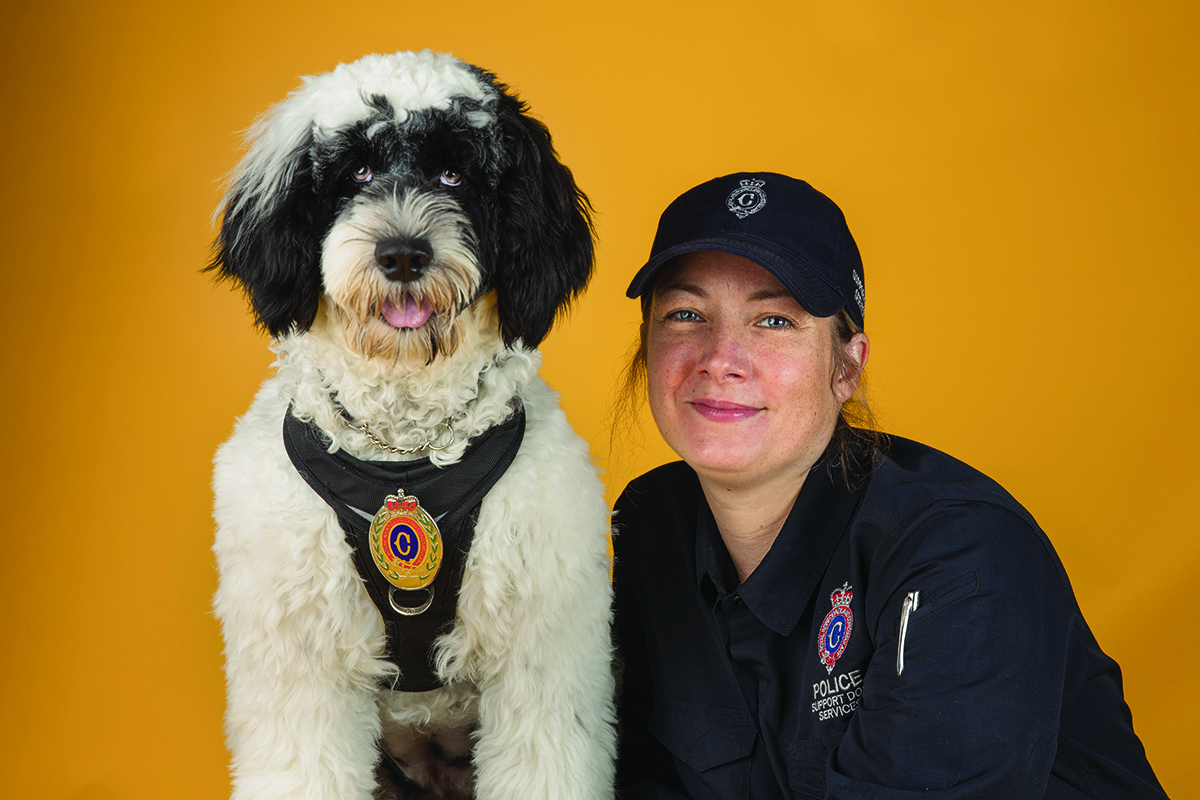 Stella, the RNC’s Support Dog and her human companion Constable Krista Fagan have taken social media by storm spreading ‘pawsitivity’ wherever they go

NC Constable Krista Fagan hasn’t always smiled while on the job, but things have certainly changed.
Credit for a whole lot of that cheer goes to Fagan’s new partner, Stella.

“I’ve responded to some horrific calls since being with the Royal Newfoundland Constabulary, and it’s hard to see signs of someone suffering from post-traumatic stress. There’s highs and lows. But things have changed since Stella,” she shared.

Stella, the RNC’s new support dog, is 16 months old. Chief Joe Boland came up with the idea after attending a police conference on the mainland and was funded by local businessman and dog-lover Jim Hynes, owner of Sea-Force Hyperbaric in St. John’s.

“Hynes is pretty much the whole financial donor for this whole project. He paid for Stella. He’s paying for the continued training that I do ever since she arrived and he’s paid for her special police vehicle. He donates supplies and picks up other miscellaneous costs. He’s a huge dog lover and we’re so grateful,” Fagan shared.

The gratitude is personal and well as professional. Besides helping those who need support and spreading smiles out in the community, Stella has given hope and purpose to Fagan as well.

“Stella has been wonderful for my mental health. She’s been wonderful in my day-to-day living and helps with my post-traumatic stress injury. She brings a lot of comfort to me. We enjoy going and getting up in the morning and doing community visits. Right now it’s all about training, but we come home together in the evening and there’s lots of playtime.”

Stella is learning to swim, for one thing. A paddleboard has been added for extra fun. “There’s only so much medication and psychology sessions can do and Stella takes over and just makes things better for not just me, but for so many.”

Stella and Fagan assist victims following traumatic events. Even the pandemic has provided opportunities for good.

“Just seeing Stella, having her come to someone’s place of work brings a big smile to people’s faces. Her social media pages have been a huge, huge success. People wake up to her in the morning and the first thing they want to look at and see is what Stella was doing.”

The comments are so uplifting, she added. “Everybody’s been really happy to see Stella, and it’s just a really positive thing for the community. And the world is so much better because she’s out there spreading positivity.”

Stella was on The Herald’s cover recently, and Fagan couldn’t have been more proud. “This has been something we’ve hoped would happen, so that’s so great. And Stella actually met Rex! That makes it even better.”

What is it about Stella, we ask. “She’s a soothing-looking dog. She’s quite playful. She’s smart. She knows on Friday we do Employee Wellness Day at headquarters and she knows which officers have dog treats so sometimes she scurries off to certain offices that she knows has really good treats.”

She’s also a fan of Chief Boland who will soon be retiring. “She walks up to the chief’s office, not because she wants to file a complaint or anything, but there’s really good treats in there. Now, the door is secured so Stella figured out a new trick. If she jumps at the door and makes a little noise, the secretary can see her on the video camera and can buzz her in. She’s pretty proud of that,” Fagan shared.

Fagan says Stella isn’t the only one who will miss Boland when he leaves.

“He’s the spearhead person behind this program. It’s the first for Newfoundland and Labrador. He has been not only helpful in my own mental health, he’s been wonderful when it comes to mental health for all of our RNC employees. He brought in the equine therapy, and then bringing Stella in. He’s helped plan Stella’s Wellness Corner for employees to come and have that mental health break.

“Because Chief Boland knows that mental health is such a priority, especially during this pandemic, he brought about all these projects that are close to his heart, like Stella. We’re going to really miss him when he goes,” Fagan adds.

What should those in the community do if they encounter Fagan and Stella?

“We encourage people to come up and say hello to Stella. She’s assigned to everybody. She’s there to provide comfort and support for everybody so we do encourage, if you do see us out, stop and say hello. We’ll certainly take the time to make sure everyone gets to meet a celebrity and probably get an autograph too.”

Maybe Stella can sign Herald copies for her fans? Fagan laughed. “Of course! She’d love to! Stella loved the cover and the article. She was super pumped all day, especially to be on their with her TV dog crush Rex. We encouraged folks to post a picture of their pets on her socials with Stella’s cover, so that was so much fun.”

One thought on “Special Feature | Got it Rough: Meet Stella”