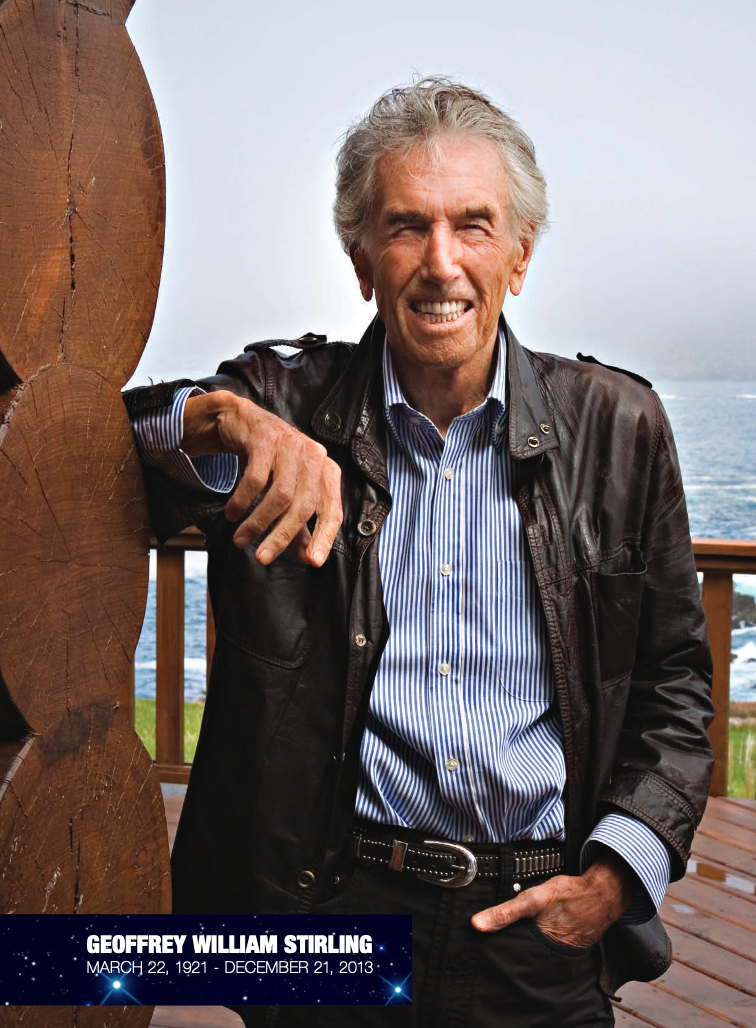 A tribute to the fascinating, spectacular life of media mogul Geoff Stirling and how  his ‘golden’ touch revolutionized the nation’s media landscape

He was a titan of business, a visionary. Geoff Stirling was spiritual, mystical, a daring free spirit and, to many, a friend.

He was larger than life and, even into his late 80s, his collar was popped over those long, unruly locks. His slim, athletic build conveyed a rock star aura that afforded him a presence.

EYE ON THE TARGET

Some considered him eccentric but, hey, says who? That’s what he once asked while, barefoot, walking over the sharp, gravel stones at his seaside Torbay home to, like Robin Hood, teach this young editor how to shoot bow and arrows. Straining the bow with those rawboned arms, he rarely missed.

It’s a mind-body connection, he surmised, using the bow as a philosophical metaphor to ‘always keep your eye on the target’.

His instincts were incomparable – from the price of gold to satellite television. He bought gold at $36 an ounce, making a fortune, and introduced Canada to 24-hour television via NTV.

He was quirky and, as was well documented, gold once ran through his veins – a unique treatment that cured him of his arthritis. Perhaps, but what truly fueled his heart and soul was the people of this beautiful province.

Like so many of the people he adopted into his work family, we would become great friends. We’d play table tennis and chat about everything from crop circles to college basketball. We’d talk business and family, JFK and Elvis. His brilliant mind was busy. Almost every conversation focused around Newfoundland and Labrador, and one of my last memories of Geoff confirmed his passion for home. He was nearing 90 and toiling through yet another cold, damp Newfoundland winter. Wealthy, he could live anywhere in the world but refused to leave. “I don’t want to die anywhere else,” he told me. “I want to be in Newfoundland, next to the rocks and the ocean.”

It was the salty sea, not gold, that ran through his veins.

The Herald’s 75th anniversary is a testament to his brilliance.

In 1946, Stirling had a dream. Just 24, the St. John’s native wanted to create his own tabloid newspaper. The odds were stacked against him. He had a startup fund of $1,000 — cash he’d saved from working at his father’s downtown restaurant. He also had media experience working as a freelancer with publications like Time and The Chicago Tribune. He was determined to create The Sunday Herald, a feisty weekly that featured news, gossip, comics, and ghost stories. It would provide “a little something for everyone.”

Many – including fellow journalist, aspiring politician and newspaper owner Joseph R. Smallwood – told him it would never work. Stirling, the visionary, refused to waver. On May 12, 1946, The Sunday Herald made its debut, selling 10,000 copies in just two hours.

For the first five years of The Herald’s existence, it was practically a one-man show. Stirling wrote The Herald from cover to cover, sold the advertising, printed it, and even did door-to-door deliveries. He’d often punish the typewriter to compile several editions before boarding a plane for destinations unknown, from Toronto to Tibet, finding energy in the search.

Those early years were a delight for readers. Stirling’s tabloid was a raucous look at life in Newfoundland. It reported on everything from cops getting caught in a bawdyhouse to the backroom shenanigans of Joey Smallwood’s Liberals.

His dogged determination led to the magazine you’re now holding – 75 years later. The little tabloid would spawn a media empire, one that also includes radio (OZFM) and television (NTV).

That vision for The Newfoundland Herald never faded, even when Stirling’s media empire grew into radio and television in the 1950s and ’60s, both here and across Canada.

Seizing an opportunity when he saw one, he used this publication to help promote his new television and radio stations, CJON. It was a perfect marriage.

Until 1964, CJON was the only television station in the province. Competition came later that year when the CBC opened its own studio. Only two years later, CJON became the first to broadcast in colour. In the mid-1970s, it was the first to broadcast 24 hours a day. Stirling somehow worked best in the lean hours, awakening late-night viewers with the unconventional – moon landings and spiritual superheroes, Indian and Eastern mysticism, and the American counterculture. Oh, and everything else that piqued his extreme curiosity.

Most would agree Stirling was a maverick, the type who refused to take the easy route, instead travelling his own path. It’s what separated him from his contemporaries, the reason why he proved Smallwood wrong 75 years ago.

Stirling often talked about his life as the “movie.” He was the leading man, producer and in complete control on the set. And what a blockbuster it was.

One iconic moment was a sit-down meeting with a Beatle. In October of 1969, he and his son Scott contacted John Lennon while vacationing in London. The telex note to Lennon – one of the biggest, most influential rock stars of the day, and possibly of all time – simply said: “I’ve heard your Come Together. So here I am. Geoff Stirling.”

A few hours later, they were seated together at Apple headquarters discussing how Stirling’s group of Canadian radio stations, and CKGM-FM in particular, could help John and Yoko spread their peace message. In return, Lennon agreed to an in-depth interview for the Stirling stations.

IN SEARCH OF A NEW AGE

In his own book, In Search of A New Age, Stirling wrote, “There had been nothing in my education thus far that had even hinted at man expanding his limitations, which I began to see were self-imposed. It was a further revelation to me to learn that man is so structured that he has to first create the tools within himself in order to unleash the power to think, and that a man simply cannot comprehend new information or new knowledge until a corresponding vibratory brain cell has been willingly prepared to absorb it.”

For Stirling, there were no limitations. His relationship with our first premier, Joseph R. Smallwood, was one that was most unique. It was Smallwood who sold him that first bit of newsprint that became the inaugural issue of The Sunday Herald in May of ’46.

It was Smallwood who co-starred with him in the NFB documentary, Waiting For Fidel – two different visions of what they wanted to achieve by meeting Fidel Castro. They didn’t meet him, but the story, they say, is all about the journey.

Stirling was very much his own man, never believing in the word can’t.

Truth is, Stirling didn’t really care for accolades. He often turned them down.

Geoff loved Newfoundland more than anyone. He accomplished so much in life. He was a great athlete. He created businesses that would employ hundreds over seven decades. He traveled the world, met world dignitaries but felt most comfortable around everyday Newfoundlanders. His family adored him.

Yes, his business savvy afforded him great personal prosperity, but his true wealth is that he lived his life exactly as he intended – daring himself to jump higher, encouraging others to be better, yet always doing so with class and dignity. He wasn’t afraid of death and often talked about one of his favorite topics, reincarnation.

He told me many times he was going to embrace it, knowing the movie would continue and that he was merely going to change frequencies.

Geoff Stirling did change frequencies on December 21, 2013, but the movie continues. The man who gave up law school to sell alligator skins in Honduras before starting a media empire delivered a screenwriter’s dream. He had a fierce love for his family, this province, and life itself. His incredible performance afforded him a well-earned, rousing standing ovation.

One thought on “The Real Captain Newfoundland”