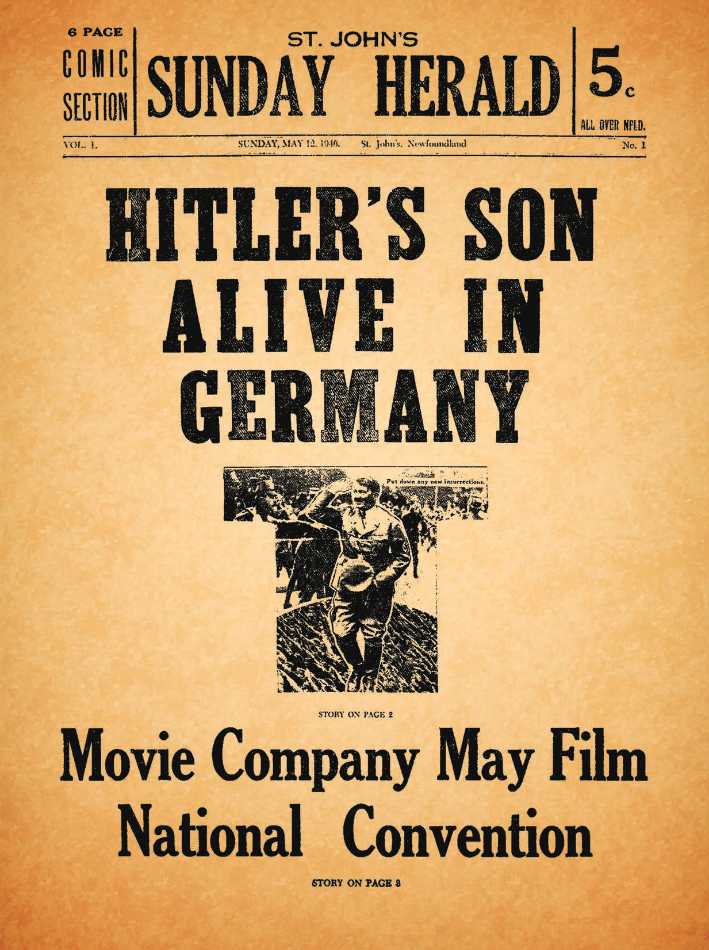 My Dad, Geoff Stirling, started The Newfoundland Herald in 1946 right after World War II, as a Sunday paper called The Sunday Herald. Joey Smallwood had just tried his own hand at publishing, but his political newspaper couldn’t make a go of it financially, so he sold Geoff tons of newsprint paper that he had leftover. He also gave Geoff his opinion that The Sunday Herald would never work.

Geoff’s idea was to publish a family paper that would have something for everyone, not just local stories, but horoscopes, comics, ghost stories, puzzles and more.

He had enough paper for six issues and sold it for five cents. The first six issues sold out! Geoff wrote it, sold the advertising, printed it and distributed it.

He was a one-man show starting out, even dropping bundles of The Herald wrapped in bright orange onto the ice floes free of charge for the sealers.

After days and even weeks on the ice they appreciated being able to read the newspaper and started buying it when they returned home.

Geoff was for Responsible Government in the 1949 vote to join Canada and noted that wherever the Herald was sold people voted for Newfoundland to be independent. Although the final vote was very close, Newfoundland became Canada’s 10th province.

In 1955 Geoff started CJON Television, known today as NTV. He introduced the TV guide to the Herald and it was a pull out that required scissors to cut it into a readable guide.

Over the past 75 years hundreds of writers, artists, editors, printers and carriers have all contributed to the Herald right up to today. I thank each and every one! At one point readers would call The Herald Newfoundland’s bible because it was read religiously every single week.

In the late ‘70s The Newfoundland Herald adapted a magazine format and then went with full colour photography on the cover. Today The Herald has colour on every page and is available online.

How things have changed since the early days with no Internet, no television and only one daytime radio station playing mostly religious music in St. John’s.

Over the years Geoff did his best to promote Newfoundland artists, musicians, writers, sports heroes, and many others. He wanted to show that we had our own local celebrities and he was very proud of that. He also wanted Newfoundland and Canada to have their own superheroes, so we collaborated on developing Captain Newfoundland and Captain Canada.

He asked me to fill a comic page every week, so I wrote scripts and hired Danny Bulanandi, who was working for Marvel and DC drawing Spider-Man and Superman among others. Many local superheroes came out of this enterprise.

Geoff was all about promoting Newfoundland and he felt the most important thing for any entrepreneur was confidence in whatever endeavour one chooses. To have confidence in yourself and to not be discouraged by others. After all, he’d been told The Herald would never be successful! When he started NTV people said he was crazy. There wasn’t a single TV in Newfoundland when he started out but he could see the “Invisibles” he’d say. He saw the future potentials, and for the first six years CJON TV was a CBC affiliate. In 1963 Geoff and seven other broadcasters across Canada founded CTV.

The Herald’s motto has been on our masthead page since the beginning.

He always felt a great responsibility to have accountable journalism in all our medias. It’s more important now than ever I believe. Many people believe most journalism is “ fake news.”

Probably the edition that made the most impact on me was when Geoff decided to meet John Lennon. We were in London so he sent a telegram to John at Apple Studios. It said simply, “I heard your Come Together so here I am. Within the hour the phone rang and it was John and Yoko inviting us over. John and Geoff got along so famously that John and Yoko invited us to their home the next day and showed us perhaps the first ever music video. It was called Imagine.

The year was 1969 and the year before

Martin Luther King and Bobby Kennedy had been killed by gunfire. Geoff and John talked about the battle between good and evil. John referred to the “goodies and the baddies.” 12 years later John himself was shot and killed in NYC.

Geoff was into sports growing up. He competed in the Pan American Games in the high jump competition and is in the Canadian Sports Hall of Fame (as well as the Broadcasting and Business Halls of Fame). He’s also in the Royal Regatta Hall as a builder.

Corey and Trina wrote and sang On the Cover of the Newfoundland Herald and I’ve learned just how proud people are to be on the cover! For a Newfoundlander it is a great thrill and it always makes me feel proud of the Herald to promote our own.

I’ve been involved with the Herald since the 70s. I wrote the last two cover stories of the Herald’s newspaper format on guns and capital punishment.

Today, as president, I’m as proud of our staff as I’ve ever been and it feels really good to celebrate The Newfoundland Herald’s 75th Anniversary!

And to our readers over the years who have been so loyal and made the Herald possible, a very big Thank You to all!! We wouldn’t be here without you!! God Bless You.