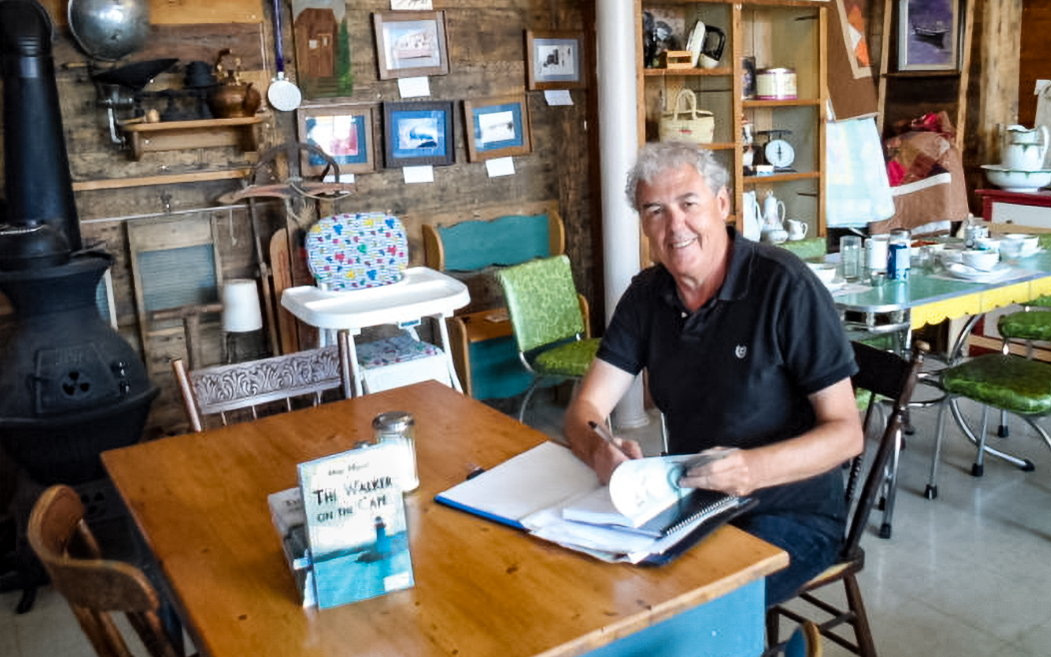 “I loved books; that’s where it started for me,” shared Mike Martin, Newfoundland native and author of book series Sgt. Windflower Mysteries. “I always felt an urge to write. I almost felt a need to write, if I wasn’t writing I didn’t feel comfortable.”

Martin’s love for literature came to him at a young age. He grew up in town with three of his older sisters, two of whom were teachers. He says they would take him to the library as a youth and it became his favourite place. Martin describes his time spent at the library as magical. “I connected with the fact that I could create my own reality or a world that was much different than the one I was living in,” said Martin.

That’s where it all started for Martin. He too wanted to recreate this feeling he had for others to give them their escape.

He began writing short stories as a child, with aspirations of becoming an author. During these early days, he had a fear of being judged and wasn’t comfortable showing his work to just anyone, but he didn’t let that stop him.

As he became an adult, he moved to Ottawa to continue his career as a writer. Martin started as a freelancer, writing wherever he could for whomever he could. He did speech writing, policy papers, articles, and news clippings.

One day Martin had enough. He decided it was time to break down the walls of fear and share his work.

Martin wrote his story and shipped it off to every publication he could until it was finally picked up. A small trade publication published the piece and he was paid 15 dollars for his work.
Although it wasn’t much, that was all the encouragement Martin needed.

He decided then it was time to start working on his first book. He had always dreamed of writing a great piece of fiction, but it wasn’t working.

Martin’s partner introduced him to the world of mystery novels, which he had never completely dived into. He said he found a formula when reading mystery stories, one that fit his writing agenda.

“It gave me this box that I could draw in and that’s where I started from,” said Martin.
Although he had the formula and his creative box, it wasn’t until Martin returned home to Newfoundland that he found his inspiration.

“My partner is not from Newfoundland,” said Martin. “I found out her father was and that he was from Grand Bank and we started going out there regularly about 15 years ago.”

STORIES OF THE PAST

Martin quickly became interested in the history of Grand Bank. He found the small town intriguing, and he fell in love with the stories of the past he heard floating around. He thought that this would be the perfect setting for his novel.

As time passed he and his partner bought and restored her grandfather’s house so they would have a place to stay while in the province. Through exploring the community one night the idea for his main character came to him.

“One night as I was walking around down by the wharf, through the fog, it just hit me,” said Martin. “The idea for Sgt. Winston Windflower. The character had just come to me. Now that I had that I could begin writing.”

Now, with his main character, Martin could begin creating.

Unlike most authors, Martin approached writing this story differently. With no end in mind, he says he knew how he wanted the novel to start and what direction he wanted to head in, but he also wanted to go on this journey with the character and surprise himself along the way.

WALKER ON THE CAPE

For his first novel, The Walker on the Cape, Martin drew inspiration from a story he had heard during his time in Grand Bank. A man who was walking through the cape suddenly dropped and died of a heart attack.

“A lot of these stories have come from things I’ve heard in Grand Bank,” said Martin. “Many people didn’t believe the man had a heart attack that night, so that’s what I did. I took a true local occurrence and told a different story from it.”

With the journey of the first book concluding, Martin was unsure of how he wanted the novel to end.

“People say that the beginning of the novel is the hardest,” said Martin. “But, how do you end a book? I was struggling with that part. My partner suggested that I turn it into a series and I thought, ‘that’s great.’ I can solve the mystery, but I can also leave the anticipation that there is more to come.”

And that’s exactly what Martin did.

With 10 books in the series and counting, Martin’s latest installment of Sgt. Windflower Mysteries, Safe Harbour, is available now.

The newest addition to the series takes a different spin on Windflower. The main antagonist has left

Grand Bank and has found himself stationed in St. John’s. Through the novel you see a side of Windflower we have not quite seen yet, watching him as he adjusts to his new roles as a husband and as a father. Through every novel we can see growth. Growth from Windflower and the series and growth from Martin as an author. That’s what has captured his audience.

“It was about four or five books in before I noticed. People became attached to the story and many people who read the first book kept following through and keeping up with the Windflower news,” said Martin. “When it’s close to home it is easy to connect with.”

Martin considers his novels to be special, and with the connection from his audience, Martin has created a new reality to share with others.

With no stop in mind, an eleventh installment will be added to the series this coming fall. Martin did not want to give too much away about the upcoming novel. He preferred to keep it a mystery.

“I never intended on making the book a series,” said Martin. “As I wrote the stories I remembered something – that a character does not die. The story does not die, until the writer dies.”