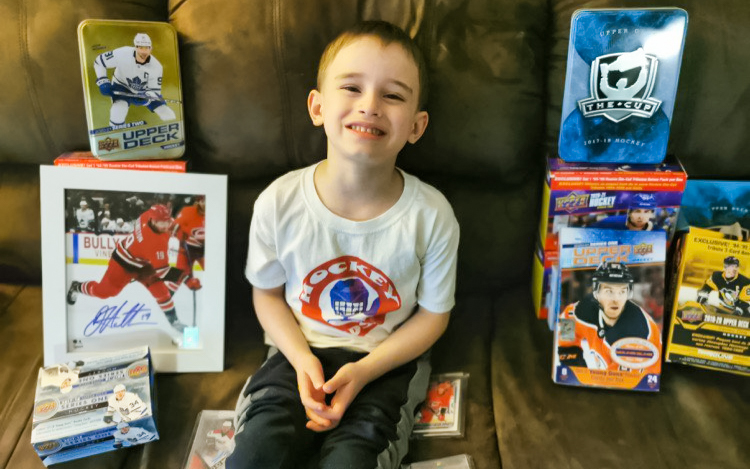 Card collecting has brought fathers and sons closer together for decades

Hockey card collecting has formed a strong bond between fathers and sons. Since the ‘90s card collecting has been a popular hobby amongst sports fans. Personal collections have been passed down from father to son for decades. Opening packs of cards has created memories that will last a lifetime for most fathers, especially when they get a valuable card or even just a card from their favourite team.

Joshua Bonnell and his five-year-old son Declan Glover started collecting at the beginning of the pandemic.

Bonnell says they are both big hockey fans and when they were stuck in the house and had nothing to do they decided to pick up a new hobby.

“Ever since we both ripped open our first pack we’ve been hooked on it,” he explained.

Bonnell is a member of the CardBreakNL Facebook group, sharing a big reason why they are so invested in the hobby is the community that surrounds it.

“The card collecting community here is amazing. Anybody is willing to help you out, buying, selling and trading cards or even if you just have a question to ask,” he said.

Shawn Mathe has been collecting since he was a little kid. He decided to introduce his

five-year-old son, Gavin, into the hobby over the past couple of years. Mathe says the community plays a big role in keeping him engaged in the hobby.

“The hobby brings a lot of people close. It’s a tight-knit community and it’s nice to be a part of that comradery when it comes to collecting cards,” Mathe said, adding that his son loves opening packs.

“I just wanted to show him that it was a really cool hobby. I think it’s really neat and you can learn a lot. He knows every NHL team now,  just by their logo, so it’s teaching him as well.”

Mathe says that his son is learning a lot from collecting cards.

“It encompasses a lot when you think about everything that’s involved with collecting. There’s math for statistics, there’s colours, there’s cities and there’s patterns.”

Josh’s favourite team is the Carolina Hurricanes and Declan’s is the Pittsburgh Penguins. Josh says they both like collecting cards from their favourite teams.

Declan brought some of his favourite cards to show me. He looked so proud of his collection. He says he loves collecting cards with his dad.

“It makes me so happy,” said Glover.

Collecting cards with his son, he adds, makes the hobby more enjoyable.

“It’s someone to share it with. It doesn’t matter if we are opening expensive boxes or Dollarama packs. He just loves opening the cards, he goes ring ring ring if he thinks it’s a good card. Just seeing him engaged with it like when I was a kid, is great.”

Mathe says the hobby isn’t about making money, it’s about enjoying it with your friends, family, and the community.

“For me when I open up packs with him I don’t look at the dollar signs associated with it anymore. It’s a hobby,” he shares. “It’s what I love to do. When I retire I would love to open up my own hobby shop. I would love to have that enjoyment of seeing people pull these massive crazy cards and know that it came from my shop. It gives me so much enjoyment seeing Gavin’s face light up when he is opening packs.”

Bonnell says that this hobby provides him and his son with so many memories.

“It’s nice to let him do things I wasn’t able to do as a kid and share these moments with him,” he said.

Mathe adds that card collecting has also provided memories that last a lifetime for him and his son.

“My favourite card is that card I pulled with my dad because he has since passed away. It’s something that when I look at it, it always brings me back to that time when I pulled my first jersey card. No matter what value people put on cards, that card is the most personally valuable to me,” he admits.

Collections getting passed down through generations, says Mathe, is one of his favourite things about the hobby.

“It’s good to have that person to always give back to,” he said. “Whenever I do pass away I know that all the things I worked hard

collecting are going right to Gavin. Hopefully, when he has a kid  he can give all the cards I gave to him to his son.”

Declan says he has started collecting for his soon-to-be-born little brother.

Mathe adds that seeing his son share the same passion for card collecting as he does is amazing.

“To see him have that same interest in hockey cards and to just have him sit with me in openings on Facebook is awesome.

“We’ve been doing it since he was two years old, so we have almost three years of videos up now,” Mathe said.

“I love to see every time he has the same little twinkle in his eye. He’s reaching people that just add me on Facebook to see the videos we do. He shows the same passion about it and it really makes my heart feel full.”