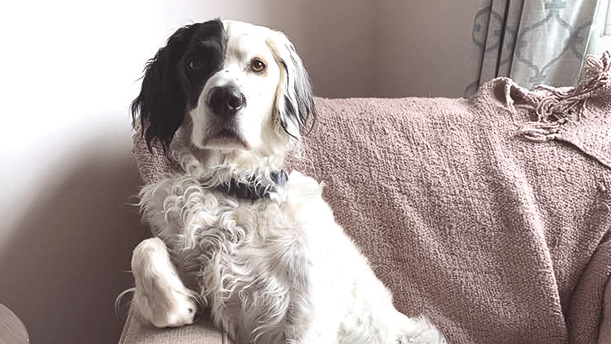 I was barely a man when my now loving wife and I brought home our English setter puppy.

Black and white with a distinctive, impossible to forget spot on one eye, the soon-to-be-named Ace – out of a love for Kiss guitarist Ace Frehley and all things poker – was timid meets hyperactive personified. The runt of the litter with a never-ending gas tank.

Ol’Aceyboy has been a part of my life for eleven years now. A constant, permanently ingrained member of the family that has achieved more in the way of welcomed status than any fringe family member or fair-weather friend.

We have a saying in our household. If you have a problem with the dog, there’s the door. He has far more seniority here than you do. And he’s much cuter.

Aside from those traumatized from a bad canine encounter or phobia – for which you have my sympathies – I generally have no need to fill up my time in life socializing with those who ‘aren’t dog people.’ It’s likely exhausting to be so joyless.

Ace has slowed, considerably, in recent months. I can see the cruel woes of ageing on a near-daily basis.

In the span of a year, a severe health event has knocked our seemingly ageless pup from too-cute-to-be-old tweener to senior citizen almost overnight. Mind you, he’s not exactly one paw across the rainbow bridge, but you notice these things after a decade of man’s best friending.

He still has his rambunctious days, but he’s very much settling into his role as the family elder statesman. And with that comes a new layer to love with our four-legged third wheel.

Walks are slower, though more calm and introspective. Where old trips to dog parks or treks around a pond would be full of chance encounters with squirrels and too many beet-red faces from pulling the reins of a near impossibly excited mid-sized muscle-ball, these days the trots around the block are joyful in their repetition.

Where before he would dash, dive and sniff holes through the earth, now he sits, lays and soaks it all in. I’d like to assume, as with us humans, the ageing doggo takes to soak in each and every minute left of life. And isn’t there just something beautiful about that?

We don’t quite know what the near-future has in store for our furry fellow. One of the cruel jokes of life is that our pets are destined without fail to occupy such a short time with us.

But perhaps there is poignancy in that, no matter how long or short the journey, the days of dogs gone by are well worth the walk.